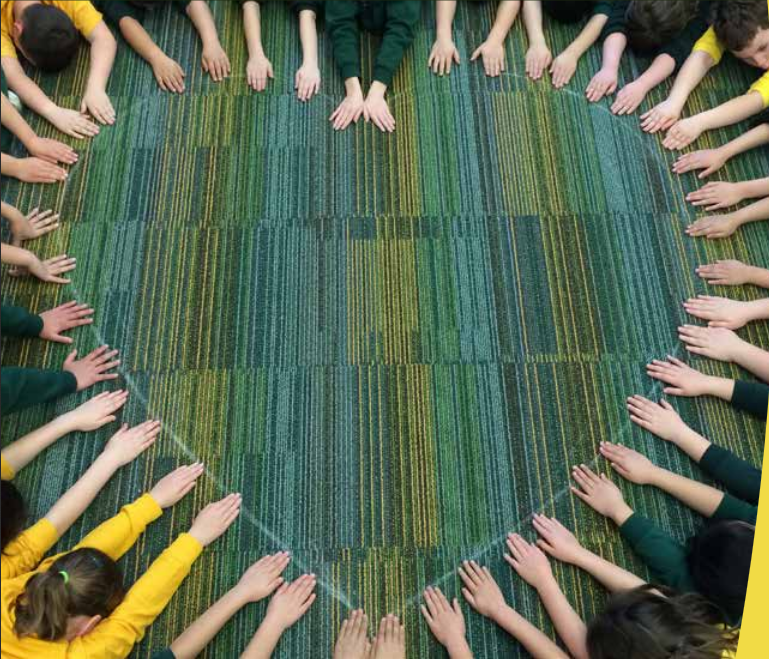 The urgent need to eliminate violence from the lives of children was a big focus on the final day of the National Research Conference on Violence against Women and Children hosted by Australia’s National Research Organisation for Women’s Safety (ANROWS).

National Children’s Commissioner Megan Mitchell provided devasting proof of that need in her keynote address and called for a major improvement in the quality of data on children’s experiences of family violence, saying it was currently “a national disgrace”.

Annie Blatchford, who is covering #ANROWS2016 for the Croakey Conference News Service, reports on the discussion below.

Like others at the conference, Mitchell praised Rosie Batty, whose son Luke was killed by his father, for her courage in speaking out and helping to finally bring national attention to the issue of violence against women and children.

Rosie was guest speaker at the conference dinner however the event was closed to the media in recognition that she has completed her responsibilities as 2015 Australian of the Year. See below however for Twitter responses from those who attended. 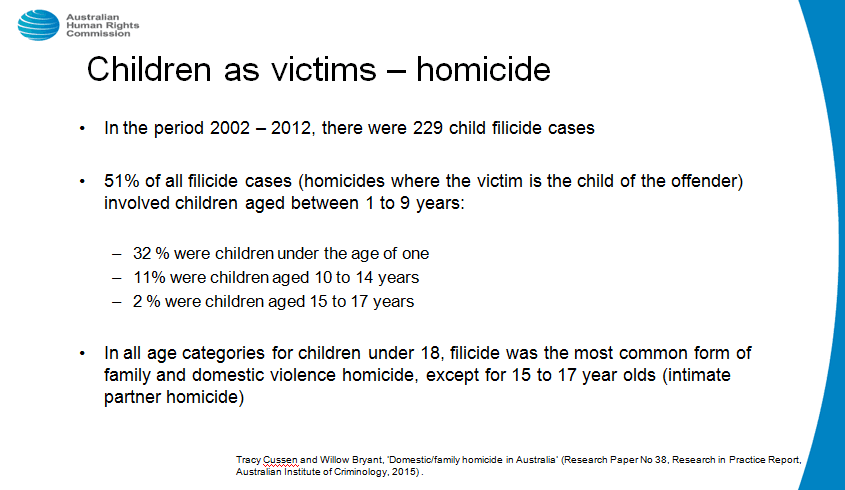 One child is murdered every fortnight at the hands of a family member. This was just one of the harrowing statistics presented by National Children’s Commissioner Megan Mitchell at the ANROWS conference on Thursday.

With figures such as these, she told delegates, it is imperative that children are put at the forefront of research and policy-making and be understood in their own right, not as part of work around the adult victims or perpetrators.

A child’s right to live free from violence

Since Mitchell took up the role of Children’s Commissioner in 2013, she has issued three major reports, (see also a child-friendly version), and sought to respond to “grave concerns” from the United Nations Committee on the Rights of the Child at Australian children’s exposure to family and domestic violence, and in particular its impact on Aboriginal and Torres Strait Islander women and children. See the committee’s 2012 report.

But Mitchell said it was not just adults in Geneva who were worried. Children themselves were telling her: “Life would be better if the government encouraged people who are violent to stop.”

In 2014, Mitchell prioritised the issue of intentional self-harm and suicidal behaviour among children and its relationship with family and domestic violence. That led to consultations, a review of what is known and an analysis of new sources of data, resulting in the Children’s Rights Report 2015. 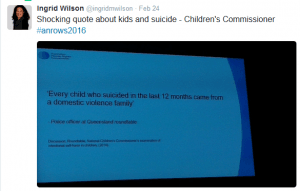 At a roundtable in Queensland, a police representative who had reviewed all child suicides over the past year in one state told her: “Every child who suicided in the last 12 months came from a domestic violence family.” 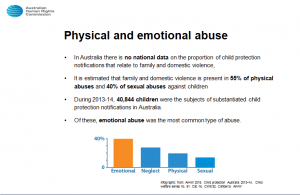 Mitchell said although data showed children’s experiences of family or domestic violence were widespread, the quality of information was a “national disgrace”, based on proxy measures, estimates, one off surveys, and administrative data sets associated with child protection and homelessness services.

She said it was encouraging that the Australian Bureau of Statistics (ABS) is working towards a national data collection and reporting framework, an approach that was commended a number of times throughout the ANROWS conference, and emphasised the need for data about children to be recorded separately and not just part of an adult entry.

However the conference heard from former senior VicHealth project officer, now independent consultant, Kim Webster that the new National Burden of Disease study examining the impact of violence against women will unfortunately exclude experiences of children witnessing family and domestic violence (see study details on p22 of this report).

Mitchell said that historically children have been peripheral to the issue of family and domestic violence and are increasingly folded into the subject of child protection responses.

There is also a lack of in-depth research on the different factors that drive a child’s resilience and ability to cope with family or domestic violence, she said, a gap noted by another conference presenter, Dr Rae Kaspiew, in her research on domestic and family violence and its relationship with parenting.

University of Melbourne Professor Kelsey Hegarty, in the audience, said PhD student Anita Morris was currently conducting research in this area and her findings show that children thrive and survive particularly when they have distance from the perpetrator.

Dr Kaspiew’s presentation also prompted comments from the audience about a lack of research and services for children entering homelessness services and for young parents aged 15 to 16. She said these gaps and service mapping should be addressed in the Third Action Plan of the National Plan to Reduce Violence Against Women and their Children, currently being considered by the ANROWS board and due in mid-2016. 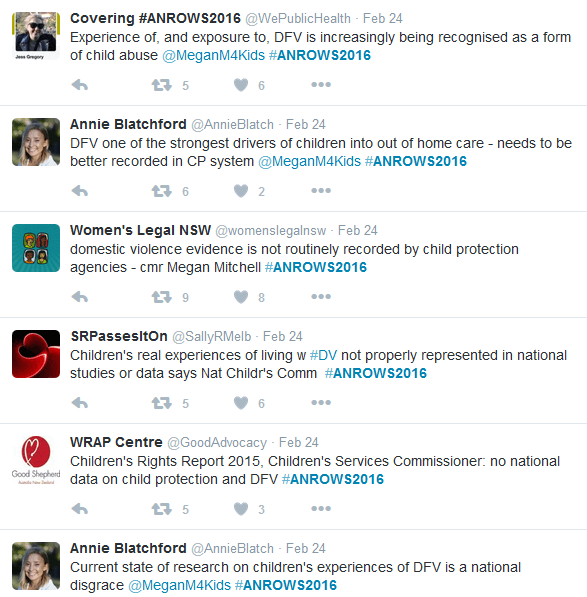 New sources of data published by the Commissioner have included information from Kids Helpline which received 999 contacts from children aged 5 to 17 years old between January 2012 and December 2014 where family or domestic violence was a main or significant secondary concern.

Of the 999 contacts, 34 per cent of the children were 10 to 13 years old and the largest proportion of the children (40 per cent) were calling in relation to exposure to violence between parents, or a parent and partner or ex-partner.

Mitchell said the Kids Helpline staff identified a number of themes from their contact with this group of children including anxiety, isolation, loneliness, sympathy for the victim and sometimes perpetrator, fear for siblings’ safety and feelings of guilt over having bad thoughts, such as wishing the perpetrator would die.

Amplify the voices of children 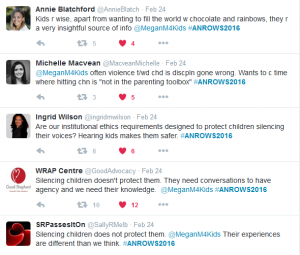 Mitchell said her direct conversations with children have confirmed they themselves are an invaluable source of information which should be tapped into more frequently.

She referred to a study commissioned by the Royal Commission into Institutional Responses to Child Sexual Abuse which revealed that children wanted greater involvement in conversations about their own safety, and being excluded made them feel more afraid.

“Silencing children does not protect them,” she said, “We think we know what they are feeling and seeing, but when you talk to them it is a very different world that they live in, we need to ensure their voices are front and centre.”

Mitchell referred to the horrific murder of Luke Batty by his father in February 2014 and said that the courage shown by his mother Rosie meant we can no longer as a nation ignore the issue.

As a result, she said, political leaders across Australia have come together in an unprecedented way to address family and domestic violence which has given her the opportunity to raise the importance of a child’s right to live free from violence and shine a light on the experience of children.

“There is a moral objective to eliminate violence from the lives of children and remove them from the menu of problem solving once and for all,” she said.

See also these slides from her presentation: 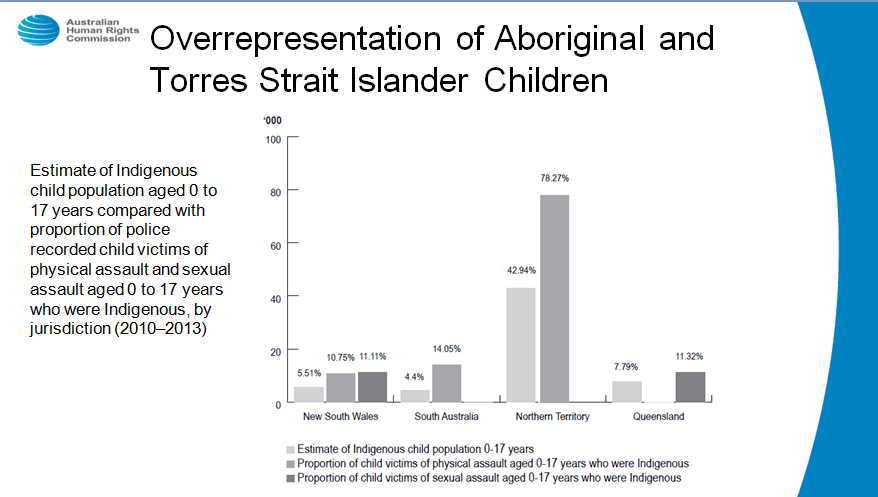 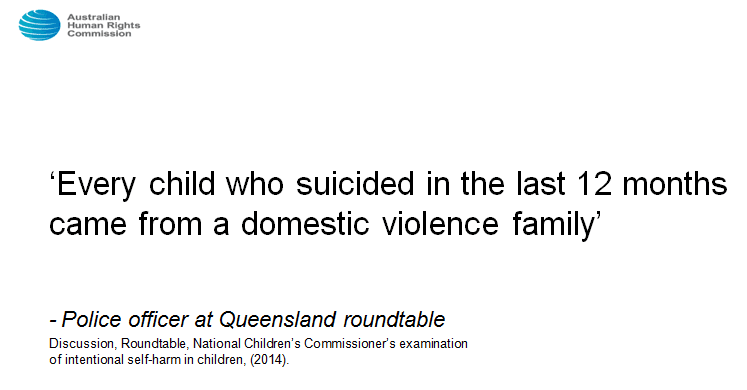 Caption: Our featured image is a photograph of students from Keilor Heights Primary School in Melbourne, presented as a gift to the National Children’s Commissioner, which was used as the cover image for the Children’s Rights Report 2015.

See a selection of tweets relating to the session 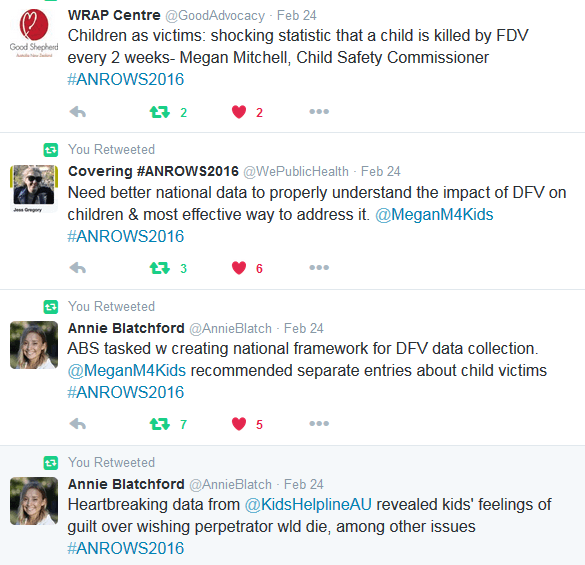 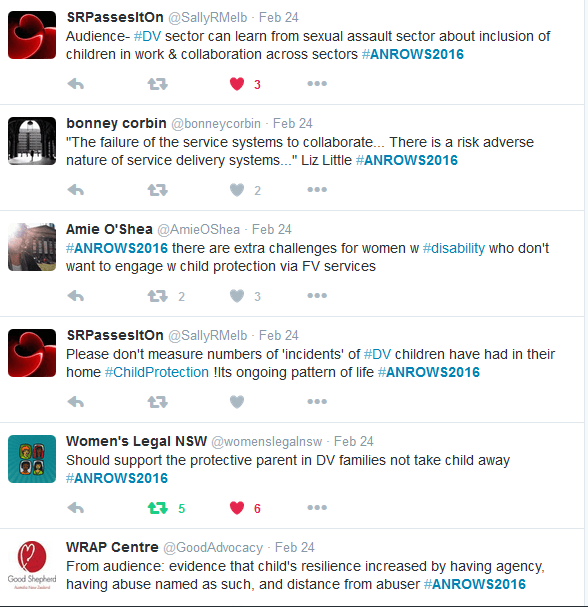 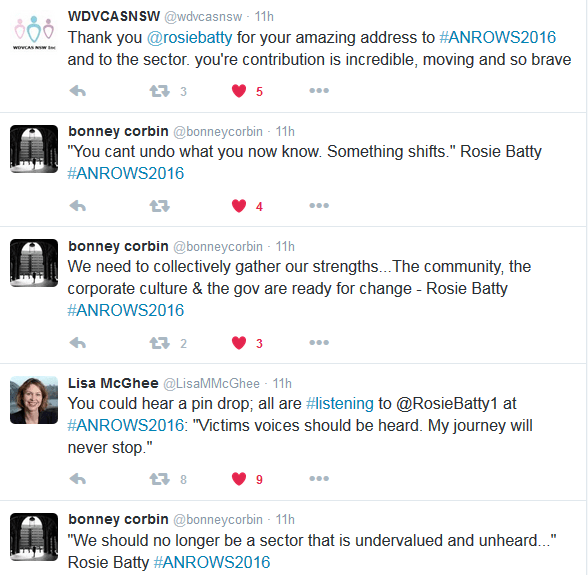