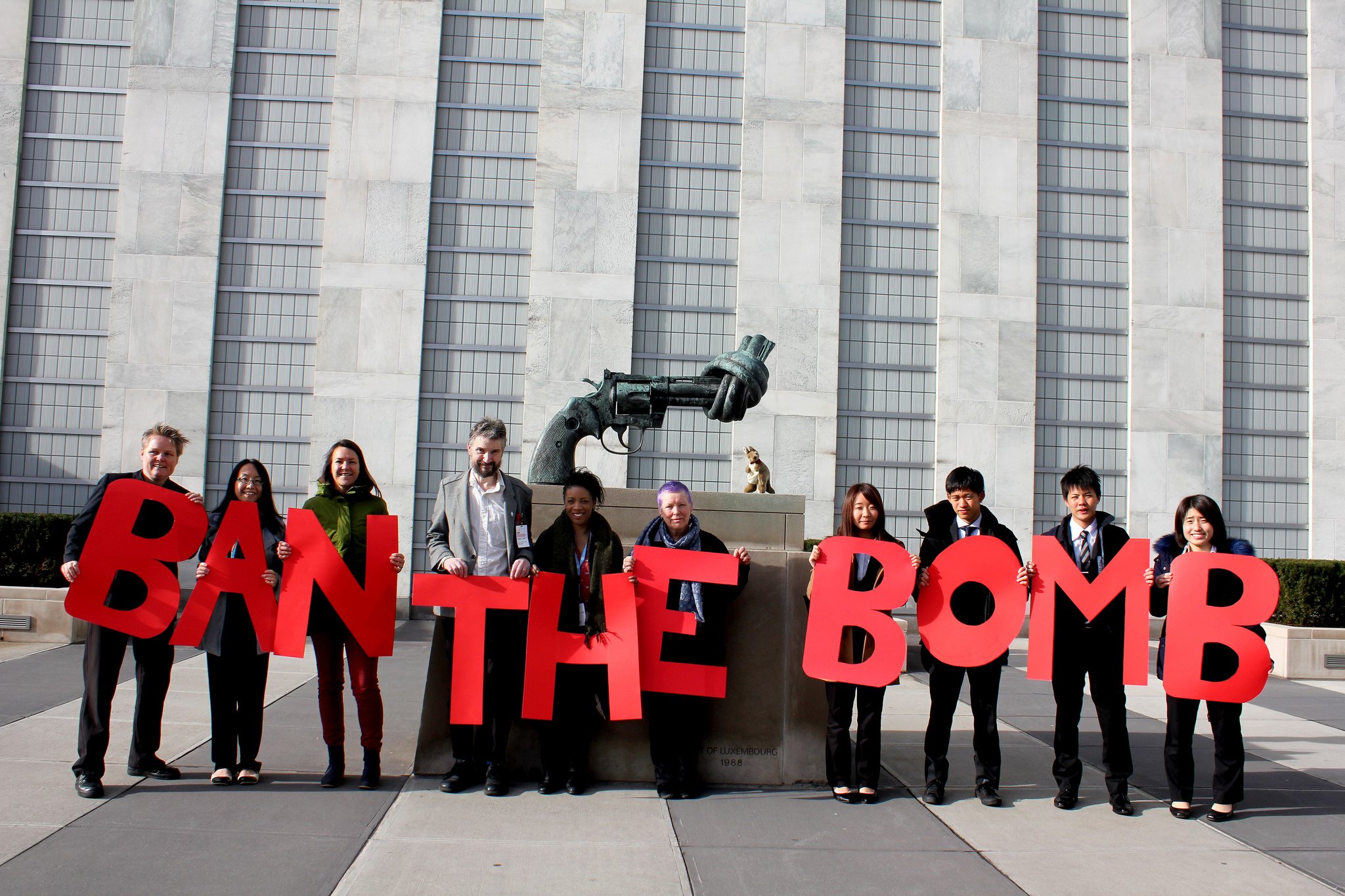 With UN negotiations due to resume in New York on Thursday on a nuclear weapons ban treaty, Australia is once more under pressure to back down from its support for a US boycott of the talks.

More than 100 countries are taking part in the debate, which began in March and have been shirked by all those nations known to hold nuclear arms.

Among those countries without nuclear weapons, Australia has been one of the most outspoken, and confirmed to parliament late last month that they will be following deliberations by webcast rather than attending, a move described by former foreign affairs minister Gareth Evans as a “complete cop out”.

In a piece for Croakey to mark the resumption of talks, Dr Sue Wareham — vice president of the Medical Association for the Prevention of War and Australian vice-president of the International Campaign to Abolish Nuclear Weapons — urges health care workers to make their voices heard on this historic campaign.

Rallies will be held across Australia this Saturday, June 17, as a National Day of Action to protest Australia’s boycott of the treaty process and in solidarity with the Women’s March and Rally to Ban the Bomb on the same day in New York.

Karina Lester, whose father Yankunytjatjara Elder Yami Lester was blinded as a child by the ‘black mist’ tests conducted by the British at Maralinga and Emu Field in the 1950s, will address the New York march. Her sister Rose will address the Sydney march, and Sue Coleman-Haseldine, a Kokatha woman who addressed the UN conference in March, will address the Melbourne protest.

The Medical Association for Prevention of War (MAPW) in Australia and the International Campaign to Abolish Nuclear Weapons (ICAN) are urging health professionals to call on the Australian Government to support current global efforts for a UN treaty to ban nuclear weapons.

Such a treaty is being negotiated, with a draft text already produced. The talks resume on Thursday (15 June), and are scheduled to conclude by 7 July.

Australia is not taking part.

Health professionals know the catastrophic effects that any use of nuclear weapons would have on human health and the environment. Most know they would have very little to offer any survivors of such an event; no meaningful medical or disaster relief response would be possible. No other weapons can cause as much death, suffering and destruction as quickly, or leave such widespread and persisting toxicity in the environment.

Yet despite that grave risk to health, Australia is boycotting the historic negotiations. We are a party to treaties prohibiting chemical weapons, biological weapons, landmines and cluster munitions, but on this, a far greater threat, we refuse even to be at the table.

This is despite being a nation that knows firsthand the terrible impact of nuclear testing.

For many people in Australia and the Pacific, nuclear weapons are not a distant, abstract threat, but a lived reality – a source of suffering, contamination and dislocation.

Nations negotiating the treaty in New York will hear directly of the ongoing impact of such tests from Karina Lester, daughter of Yankunytjatjara Elder Yami Lester who was blinded by the ‘black mist’ tests conducted by the British at Maralinga and Emu Field in the 1950s.

Karina will attend the negotiations in New York and be a key speaker at the planned Ban the Bomb Women’s Rally and March. She will also read a statement from Indigenous communities around the world welcoming the treaty negotiations and urging recognition that Indigenous people and lands have borne the brunt of nuclear testing. 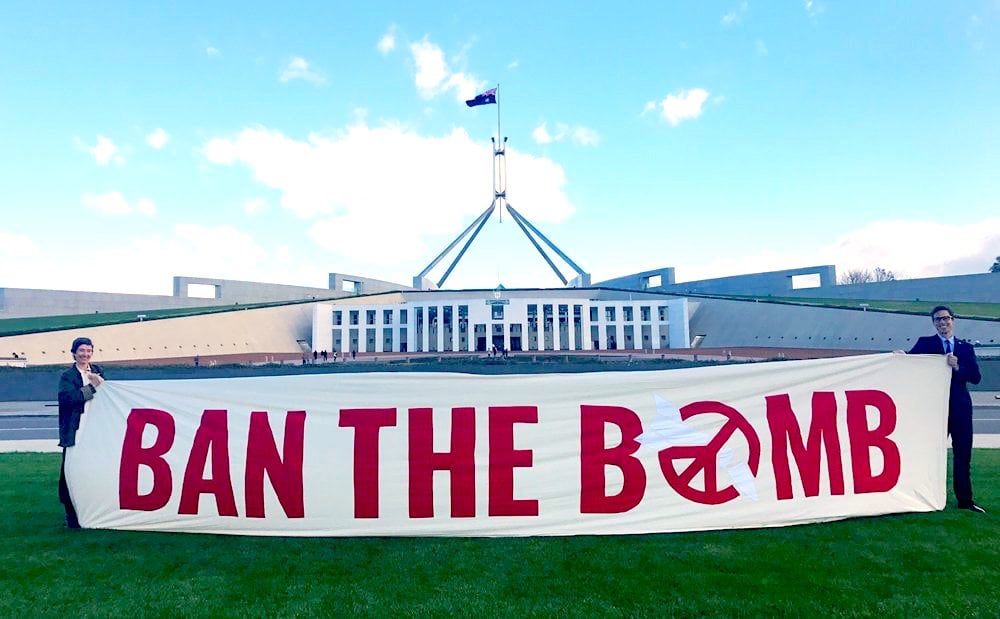 Unique in their destructive power

Nuclear weapons are unique in their destructive power and the threat they pose to the environment and human survival. They release vast amounts of energy in the form of blast and heat, causing collapse of buildings, firestorms, destruction of health and other essential services such as electricity, water, sewerage, communications and transport.

The health impacts include burns, multiple fractures, chest, abdominal and head injuries, temporary blindness and asphyxiation from the intense fires; most of these injuries would go untreated. Energy is also released in the form of ionizing radiation which causes radiation sickness, and predisposes to the onset of cancers up to many decades later.

There is an additional risk – that of nuclear winter. A regional nuclear war, say between India and Pakistan, involving around 100 Hiroshima-sized weapons would cause such massive quantities of particulate matter from burning cities entering the atmosphere that there would be a blocking of sunlight, and reduced agricultural output for up to a decade. This climate disruption could be so severe as to place up to two billion people at risk of famine, according to research by the International Physicians for the Prevention of Nuclear War.

What the nuclear weapons ban treaty would do

The Australian Government argues that it is not in our national interest to support a ban on nuclear weapons, and that we rely on US nuclear forces for our own security. In fact these weapons, which have the potential to destroy much of human civilisation, are the greatest threat to the security of everyone, including the nations that possess them and those such as Australia that claim “protection” by them.

The initial draft of the UN nuclear weapons ban treaty clearly conveys the deep humanitarian concerns that gave rise to this important and long-overdue initiative, and draws from prohibitions against other indiscriminate and inhumane weapons, such as biological and chemical weapons.

The treaty, when completed, will not see the overnight abolition of nuclear weapons but it will strengthen the global norm against their use and possession, and be a powerful instrument with which to apply greater pressure on the nations that possess them. It will spur long-overdue action on disarmament.

What we can do

Health professionals have long been at the forefront of global efforts to eliminate nuclear weapons. International Physicians for the Prevention of Nuclear War (IPPNW) was awarded the Nobel Peace Prize in 1985 in recognition of its work to alert Soviet and US leaders to the grave public health risks of nuclear war and to educate the general public.

Just over a decade ago MAPW, which is the Australian affiliate of IPPNW, initiated the International Campaign to Abolish Nuclear Weapons in an effort to revive the global disarmament movement and build public and political support for a treaty to outlaw nuclear weapons.

A recent opinion poll indicated that three in four Australians thought that our government should support the negotiations that are finally taking place for such a treaty.

All health workers have a strong role to play in actively campaigning against the worst of all weapons of mass destruction.

We therefore urge Australian health professionals to join these global efforts that have the support of International Physicians for the Prevention of Nuclear War, the World Medical Association, the World Federation of Public Health Associations, the International Council of Nurses, the Red Cross/Red Crescent movement and many other bodies including ICAN and MAPW.

We ask that you: