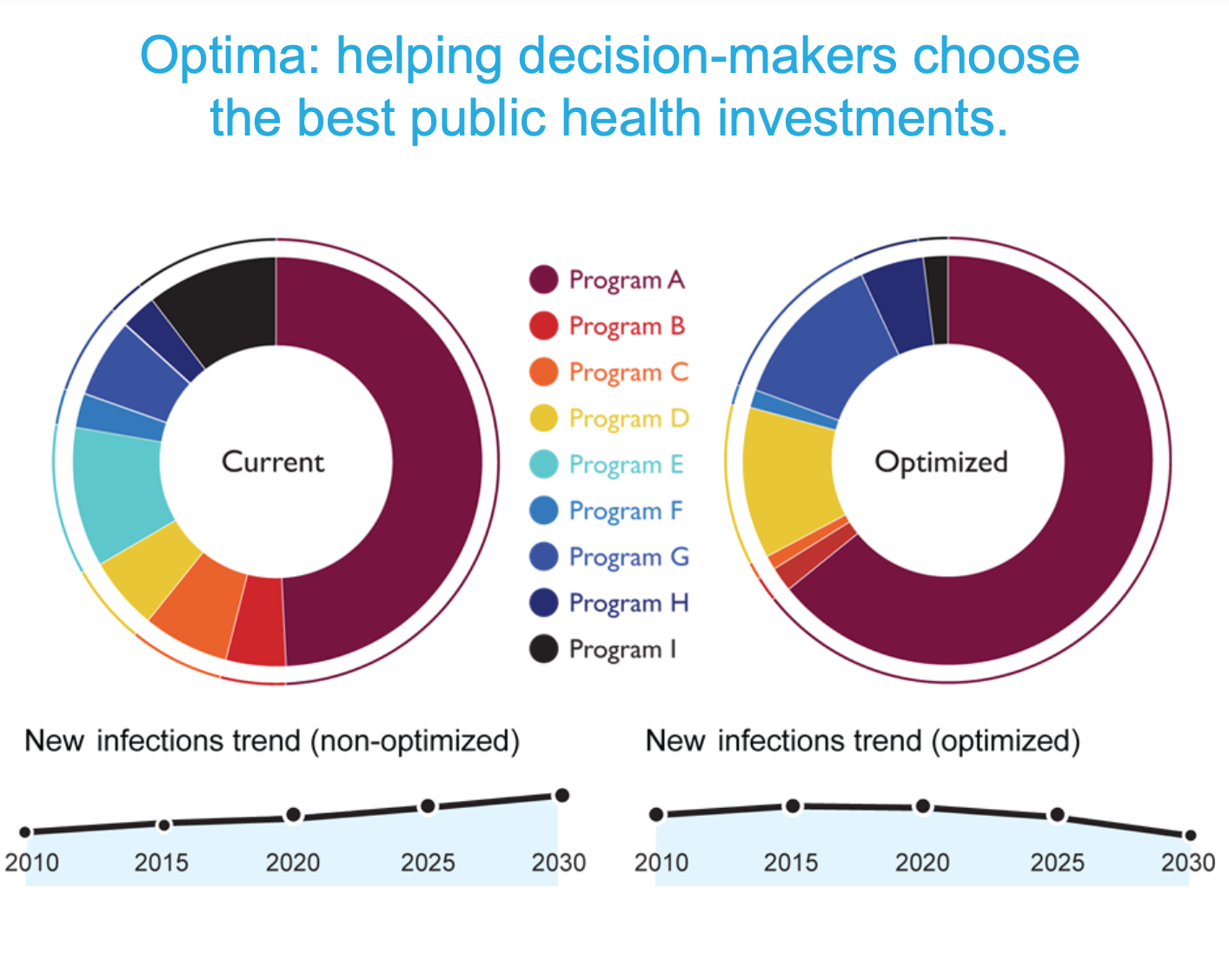 Clearly, there is a need for fundamental reforms in these areas, but it’s unlikely that the Government will agree to fund every one of these reports’ numerous recommendations.

So how should the government prioritise the funding available to ensure that the changes made will deliver maximum benefits?

An Australian-developed tool called Optima could assist in answering this question.

Professor Wilson developed Optima initially as a response to the global HIV/AIDS epidemic, noting that decisions about policies and programs occur in the context of budget allocations and operational plans, which are likely to vary over time and place.

He realised that epidemiological modelling of interventions and their impact needed to be linked to funding, budgets and other real-world constraints. Optima’s use in this context is nicely summarised in this guide from the World Bank.

Optima has now been used in over 50 countries worldwide to help governments to improve outcomes from health strategies and programs for a range of problems.

In the Sudan, Optima’s use was associated with a decrease in new HIV infections of up to 37 per cent, and it helped put Belarus on track to reduce TB-related deaths by 30 per cent.

In Nigeria, Optima has refocused prioritization of malaria control areas, with an estimated 100,000-plus deaths expected to be averted by 2020.

Better geographical targeting of existing nutrition-related interventions in Bangladesh using Optima is projected to cut the number cases of stunting, by almost one million and prevent over 25,000 child deaths by 2030.

Professor Wilson explains the need for a tool such as Optima:

Without a tool such as Optima it is very difficult to make choices about where to focus efforts and resources.  Optima helps funders prioritise resource allocation by identifying the mix of strategies which will have the greatest impact.

“Health is a complex area with many competing demands.  It can be difficult for governments to prioritise among the different options in a specific area as almost all of them will probably do some good – but achieving the best outcomes means finding the best mix of strategies at the optimum level of resourcing.

“Without a tool such as Optima, governments can find it difficult to make evidence-based decisions in the health sector.  It’s always tempting for them to reach for the lowest hanging fruit which means that the most difficult problems often get repeatedly ignored, even when they could potentially deliver the best outcomes. It can also be difficult for governments to change longstanding funding arrangements.

Politicians can feel under pressure to fund whatever is going to give them the best political win and there are often historical considerations which make it hard to de-fund areas because of structures already put into place.  Often in low income countries there are donors whose interests also have to be respected.

“We work with governments to help them achieve their objectives.  They tell us their goals and values and we put weightings into the model which reflect this and let them know how they can get as close as possible to their goal.

For some countries the goal is to achieve the greatest impact, regardless of the distribution of benefits across the population and for others equity is an important consideration.  It is the government and stakeholders who guide what data goes into Optima and how this is weighted. Some funders don’t want to trust what can seem like a ‘black box’ model which tells them what to do rather than local dialogue.  So we try to make the process transparent as possible and to put them in driver’s seat.”

When asked how Australia fares overall in relation to resource allocation, Professor Wilson says that we have performed well.

“Australia is one of the very few countries with standardised approaches to resource allocation,“ he says, “It’s not a holistic approach but works well in separate areas, such as the PBS.  Another good example is the UK which established the National Institute of Clinical Excellent (NICE) to advise the government on priorities within the National Health Service.

However, Professor Wilson has some suggestions for how Optima could be used in some specific areas of the health system in Australia.

“Mental health is one current issue which could benefit from using Optima, in particular in identifying the best balance of different professionals across the mental health workforce.  Another potential us would be to look at when it is appropriate to shift the location of care from hospitals or a secondary care setting to primary health care.  Optima can also provide insight into new infrastructure resourcing decisions, such as where new public hospitals and clinics should be built, given factors such as demographic trends and future health needs.

“Better decisions based on insights from data can improve efficiency up to 30 per cent in most countries. This means more people can get the health care they need and more lives can be saved from preventable and treatable conditions.”

Professor David Wilson was a finalist in the Data Innovation category of Research Australia’s Health and Medical Awards for his work in developing Optima.