Home Public health and population health health inequalities A place to call home: housing and its influence on health 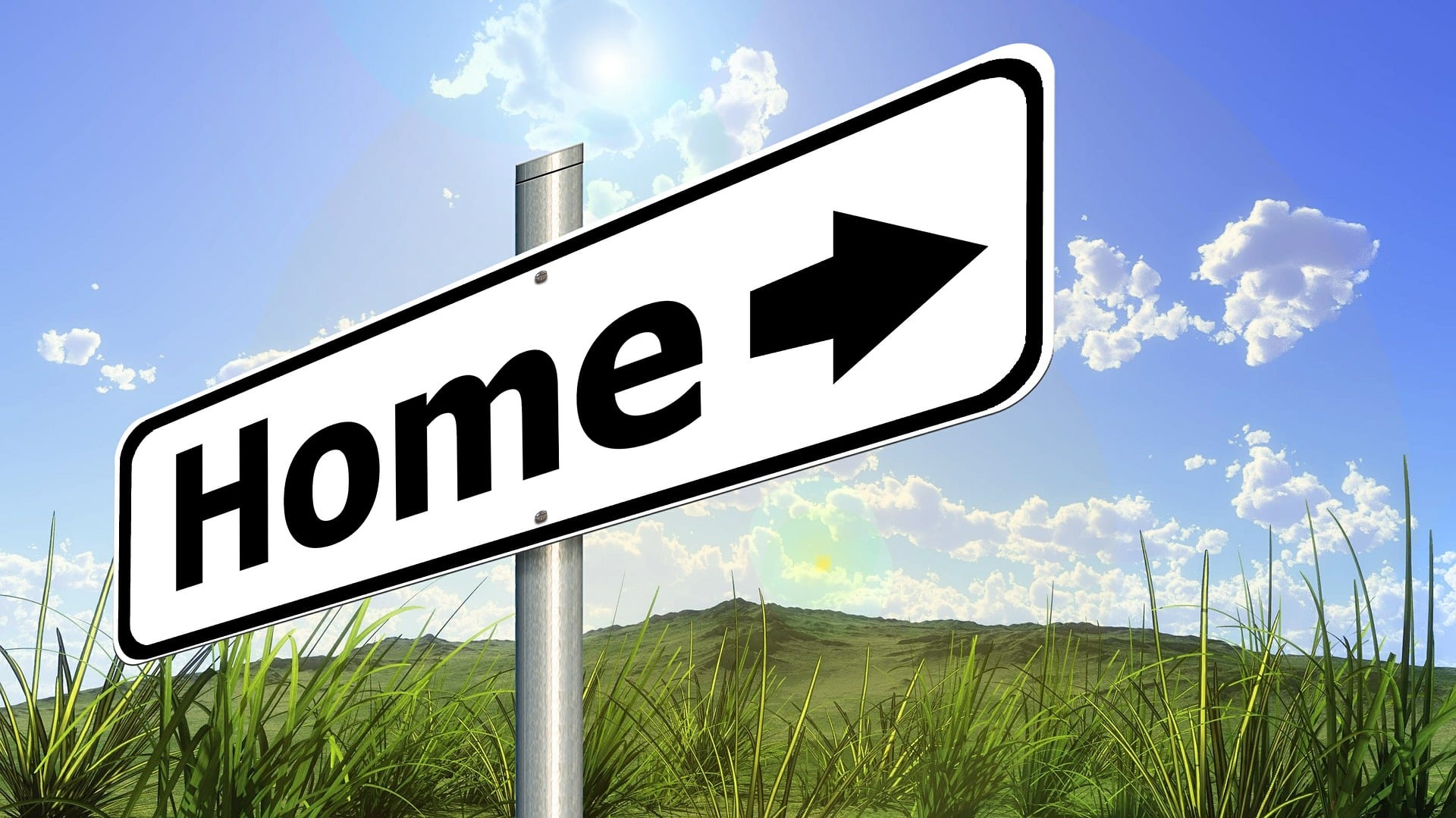 A place to call home: housing and its influence on health

More than 100 000 people in Australia are homeless, and many more are in insecure or inadequate housing arrangements. Housing stress is inextricably linked to poverty.

Below AHPA NSW branch vice president, Karen McPhail-Bell and NSW branch president, James Kite, report on the event. The post highlights some of the initiatives currently taking place in Australia to improve health via housing, and points to areas in which more could be done.

Where you live matters for your health, the Australian Health Promotion Association (AHPA) New South Wales (NSW) branch heard at their Anti-Poverty Week event on 17 October.

“Quality of housing matters when it comes to your health” Cain explained, with indoor air quality, insulation, overcrowding and poor sanitation all factors associated with poverty and high risk of disease and poorer physical health. The impacts are also disproportionately felt by disadvantaged people, exacerbated by waits of upwards of 10 years for social housing in some parts of regional NSW, Cain added.

A 2017 NCOSS survey of over 440 households in NSW living under the poverty line found affordability of gas, electricity and other affordable essential services are a top priority. In order to pay their energy bills, a third of households reported sometimes or always forgoing medical treatment when needed, over 20% went without dental treatment, and almost 10% without a substantial daily meal (Figure).

Approximately one third of stressed households minimised the use of heating and avoided hot showers to reduce their energy bill, said Cain. Notably, 50% of these households included children.

Most survey participants stated that a safe and secure place to live would make the biggest difference to improving their quality of life. Cain spoke about the growing trend towards “Housing First” approaches to homelessness, which recognise that a person’s first and primary need is to obtain stable housing. From there, underlying and intersecting health issues can be addressed. And this is working, said Cain, with fewer rough sleepers and savings in other parts of the system where the strategy has been implemented.

Housing for Health in Aboriginal communities

Standen detailed the NSW Housing for Health (HfH) initiative, a program that uses a copyright methodology originally developed in Central Australia and since used nationally and internationally. With nine evidence-based priorities to improve social housing to a standard that positively impacts health, the initiative has produced some impressive results.

The work of the late Paul Pholeros  underpins the HfH methodology, in which local community members are trained to administer standardised surveys of every eligible household.

“No survey without service” means that every part of the house, including power sockets, light switches, and taps, is tested and where possible repairs are made on the spot. “This principle is the number one factor for building trust with a community,” said Standen.

Tradespeople then complete any specialist work, typically within a week or two, followed by capital upgrades if required. A second survey follows any capital upgrade, which enables evaluation and audit of the program. In this step the community can assess whether the HfH team delivered as promised.

The underpinning theory of HfH is that healthy homes lead to improved health – but was this the case for houses in their program? Standen presented findings from their evaluation study, showing a considerable decline in hospital admissions across a number of infectious disease conditions in the participating communities. Meanwhile, communities that had not received HfH had seen steady increases in these same conditions.Data collected by licensed tradespeople during the projects dispel the myth  that social housing tenants are to blame for their housing disrepair: only 5% of repairs were for tenant damage, compared to 67% of repairs for routine wear and tear, and 28% for faulty workmanship.

For 30 years, Mary lived with a diagnosis of schizophrenia, during which time she frequented in-patient facilities. Recently, she became a beneficiary of the HASI Plus program in Tamworth, which provided her with stable housing for the first time since her diagnosis.

To Mary, this was extremely empowering. Being surrounded by her own belongings, with her own key, gave her a sense of control and a connection to a community that she had not had in a long time.

Mary’s story exemplifies the value of a place to call home, said Rutledge, not only for managing mental illness but also for improving mental wellbeing.

Rutledge reminded the AHPA audience that accommodation and shelter have long been recognised as fundamental to health and wellbeing, from the WHO. in its 1986 Ottawa Charter, through to NSW Health’s 2002 Framework for Housing and Accommodation Support for People with Mental Health Problems and Disorders, and the new National Mental Health and Suicide Prevention Plan.

Despite this longstanding recognition, mental illness remains a leading contributor to homelessness, exposing already vulnerable people to a range of factors with negative health impact. Rutledge cautioned that many people living with mental illness are unable to afford and access housing, and some are discharged from healthcare without an effective housing plan put in place.

But we have opportunities too, said Rutledge. “Social bonds” are a space to watch in terms of innovative funding solutions and new ways”. And despite what the media tells us, “the NDIS is making a difference to people’s lives, and is fundamentally about increasing people’s control”.

“Affordable housing really is a health intervention,” said Rutledge as she highlighted evidence-based solutions, such as the Housing and Supported Accommodation Initiative (HASI), HASI Plus and community living support services. “We know what works, we just need to do more of it,” she said.

Since the Ottawa Charter, one of health promotion’s principle concerns has been for empowering people to increase control over their health. AHPA’s seminar made it clear that stable, quality housing is essential to realising this goal.

More from the Twittersphere… 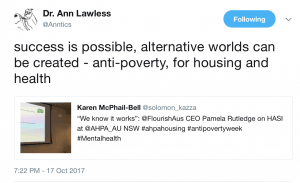 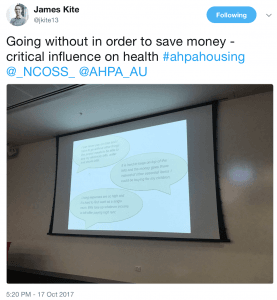 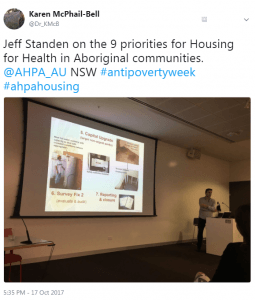 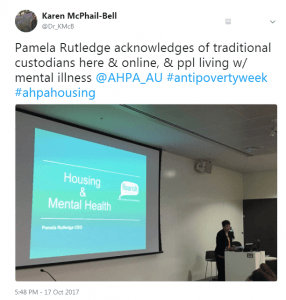