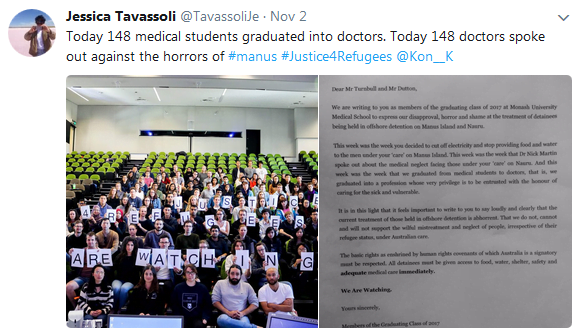 The Australian Medical Association has called on the Federal Government to allow independent verification of the living conditions and health care – or lack of – available to the 600 refugees and asylum seekers on Manus island.

AMA President Dr Michael Gannon on Tuesday said Australian doctors had significant concerns about “both physical and mental aspects of the health of these wretched souls who are stuck in a bigger political game”.

Gannon said people seeking asylum are entitled to the legal protection of the Australian state and, under that protection, to “an appropriate standard of healthcare”. He told media outlets:

“What we’ve been asking for, for some time now, is independent verification of those standards of healthcare.”

“If that means that a group of independent experts, medical professionals, other professionals from Australia, can verify this, well then that is in the interests of the Government to reveal that to the Australian people” 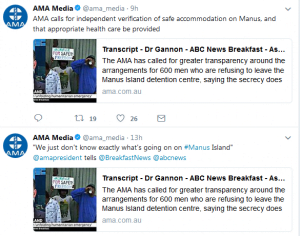 There are growing fears for the physical and mental health needs of the men who are refusing to leave the closed detention centre on Manus island, with essential services like food, water and electricity and access to their medications cut off.

The men have been told to move to three locations in or near the regional capital, East Lorengau, but they say two are not ready for habitation and that they fear for their safety from some community members.

Gannon, who criticised his predecessor Dr Brian Owler for being too political on asylum seeker issues, was at pains to not comment on whether or not the men should be on Manus in the first place, or brought to Australia or taken elsewhere.

But he said doctors had a responsibility to speak up about their health.

It’s not appropriate for me or anyone else representing Australian doctors to start to pretend that we have expertise in matters of immigration, but we are health experts and we have great concerns about the mental health and physical health needs of this group of men.

Gannon said there used to be a degree of transparency about the healthcare that asylum seekers in offshore detention were receiving, through his relationship with Dr John Brayley, the previous chief medical officer of the Department of Immigration and Border Protection. 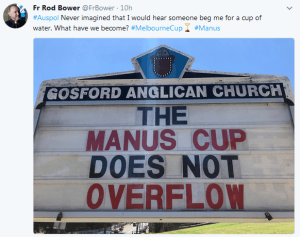 “He resigned and we’ve lost that openness where we were able to advocate on the behalf of individuals – whether they be on Manus Island or Nauru or elsewhere – behind the scenes, without great fanfare, looking after the healthcare of individuals.”

Doctors for Refugees has also emailed all Australian MPs, urging immediate action “to prevent humanitarian catastrophe on Manus Island”, warning that “we are heading for many deaths in the coming days and weeks unless urgent action is taken by Australia”

In it, they said:

These men have now been without access to the fundamentals necessary for life for over six days. In PNG’s tropical climate we must expect that serious consequences will start to occur this week. We can expect severe skin and respiratory infections, dysentery, malaria and other illnesses to start to take hold. If no action is taken immediately to alleviate this situation, we can expect deaths to start occurring very soon.

Doctors for Refugees said a man with a suspected heart attack sought assistance this week  in Lorengau Hospital but was discharged without having an ECG or blood tests.

With this level of medical support, it seems there is little hope for any refugee who becomes seriously unwell on Manus Island, whether they are in the former RPC or relocated to East Lorengau, they said. And they warned: 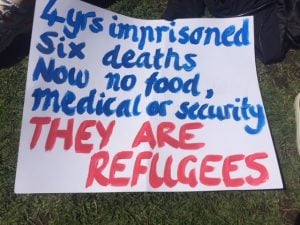 n. This is a military force which has demonstrated tremendous antipathy to the refugees, which fired indiscriminately into the RPC causing multiple injuries earlier this year and which has no training in crowd control.

In another plea for intervention, nearly 150 new graduates from Monash University Medical School (see feature image above) signed an open letter to Immigration and Border Control MInister Peter Dutton and Prime Minister Malcolm Turnbull expressing “horror, shame and disapproval of the treatment of those held in detention on Manus Island and Nauru”.

They said that signing the letter “was our first ever action as doctors”. The letter said:

“For the past week we have sat in our final lectures and contemplated the privilege and responsibility that comes with being a physician.

“It is a privilege and responsibility to care for the sick and vulnerable, and one that demands speaking out against injustice when we see it.

This is the very reason why we are making a public statement. We want the Australian government to understand that as the upcoming medical workforce we say no to the wilful neglect and mistreatment of detainees. Cutting off access to food, water, electricity, shelter and medication without an adequate plan is an act of wilful negligence and it is abhorrent.

We want the Australian government to understand that we will not be silent, that we take our responsibility as physicians seriously and that means holding the Government to account about its appalling behaviour.