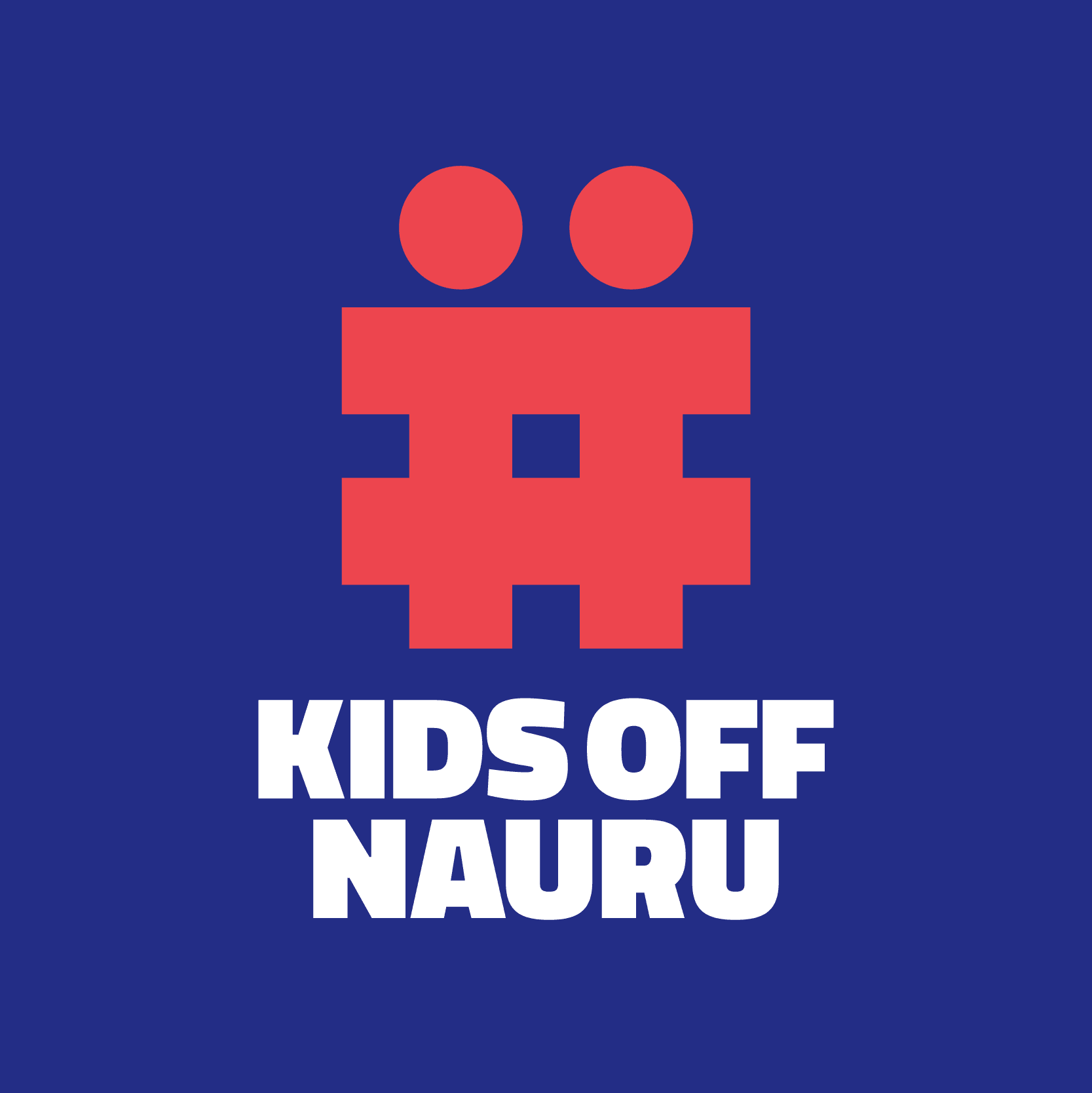 Graphic from the #KidsOffNauru campaign launched by World Vision

Introduction by Croakey: The Australian Medical Association President, Dr Tony Bartone, has written to Prime Minister Scott Morrison “demanding” that the Government move asylum seeker children and their families off Nauru to more appropriate settings for their deteriorating physical and mental health and wellbeing, preferably in Australia.

This represents a hardening position from the AMA, according to Croakey contributing editor Dr Ruth Armstrong:

“This is a shift from the AMA which should signal to everyone that we need to transfer families from Nauru to Australia urgently. In the past they have called for an independent body to oversee medical care but, to my knowledge, they haven’t joined blanket calls to bring them here.

Dr Bartone and other movers within the AMA must be convinced that the situation for families on Nauru is untenable. Every Australian needs to consider their stance in this. Call the PM’s office ((02) 6277 7700) and your local member if you support the AMA’s position.”

The Royal Australasian College of Physicians (RACP) confirmed it was also ramping up its efforts, including by signing up to the #KidsOffNauru campaign initiated by World Vision. and is planning to release a statement soon.

Earlier this week it tweeted its current statement that calls on the Australian Government to “immediately put an end to its policies on offshore processing after reports of the severe deterioration of the mental and physical health of child detainees”. 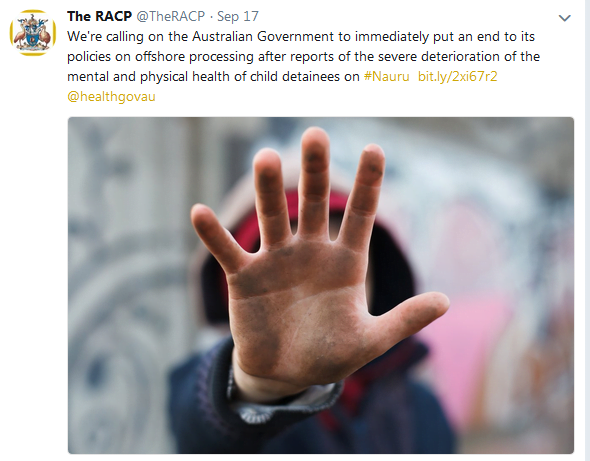 It follows reports on a series of shocking cases emerging about children on Nauru, including a 12-year-old girl who, Guardian Australia reported, is suffering from post-traumatic stress disorder and major depressive disorder, and has made repeated suicide attempts.

Despite the escalating issues and concern, according to Guardian Australia, Prime Minister Morrison’s response at a news conference today to the AMA call was, basically, no:

“We are getting families off Nauru. That’s what we’re doing. That’s why we have the arrangement with the United States and that’s why we’re pursuing that. We thank our partners in the US with the way we are able to progress with that.

You know my views about this – I’m not going to put at risk any element of Australia’s border protection policy because I know when you do that, which is what Labor did last time, thinking it would have no effect, 1,200 people died. So I’m not going to do that.”

Statement from the AMA

AMA President, Dr Tony Bartone, has written to Prime Minister Scott Morrison demanding that the Government move asylum seeker children and their families off Nauru to more appropriate settings for their deteriorating physical and mental health and wellbeing, preferably in Australia.The AMA wants to see a more compassionate Government approach to the health care of refugees and asylum seekers in the care of the Australian Government.

Dr Bartone said there had been a recent groundswell of concern and agitation across the AMA membership and the medical profession about conditions on Nauru and the escalation in reports of catastrophic mental and physical health conditions being experienced by the asylum seekers, especially children.

“Put bluntly, we want some urgent action to help these vulnerable people who find themselves in a hopeless, despairing situation,” Dr Bartone wrote in his letter to the PM.

“The AMA has been calling for a more humanitarian approach, including independent assessment of health care arrangements, for many years now.

“The medical situation for the children on Nauru has been described by health experts, including medical staff who have worked on Nauru, as critical and getting worse. It is a humanitarian emergency requiring urgent intervention.

“We have been given some hope at the bureaucratic level, but a slammed door at the political level.

“As a suburban Melbourne GP for more than 30 years, and a grassroots Australian with strong community connections and Christian values, I passionately believe we can and must do more to look after the health of these people, many of whom have fled war, conflict, or persecution.

“There are now too many credible reports concerning the effects of long-term detention and uncertainty on the physical and mental health of asylum seekers.

“It is within the power of the Government to move on this issue and play its part in allowing traumatised people to begin rebuilding their lives.

“Australia is a caring nation with a long history of compassion and respect for human rights. We need to show the Australian people and the world that we are still a caring nation.

“The AMA believes that asylum seeker children and their families on Nauru must be removed and given access to physical and mental health care of an appropriate standard.

“We also want the Government to facilitate access to Nauru for a delegation of Australian medical professionals to assess the health and welfare of child refugees and asylum seekers.

In a separate letter to all MPs and Senators urging support and advocacy for the AMA position, Dr Bartone reminded politicians that, in April 2017, the Senate Legal and Constitutional Affairs Committee released the report of its inquiry into asylum seekers on Nauru.

The inquiry made two recommendations about the availability of medical services and medical transfers:

The Government has not yet responded to the inquiry.

Dr Bartone said that the AMA praised the hard work and dedication of doctors and health workers who have been providing care with IHMS on Nauru.

“These health professionals and their employer have been doing their best in very trying conditions in isolation – and under a veil of secrecy not of their doing,” Dr Bartone said.

“The Government must get fair dinkum and give these long-suffering asylum seeker children, many of whom are extremely ill, and their families a fair go – bring them to Australia for proper care in the best possible environment for their severe mental and physical health conditions.” 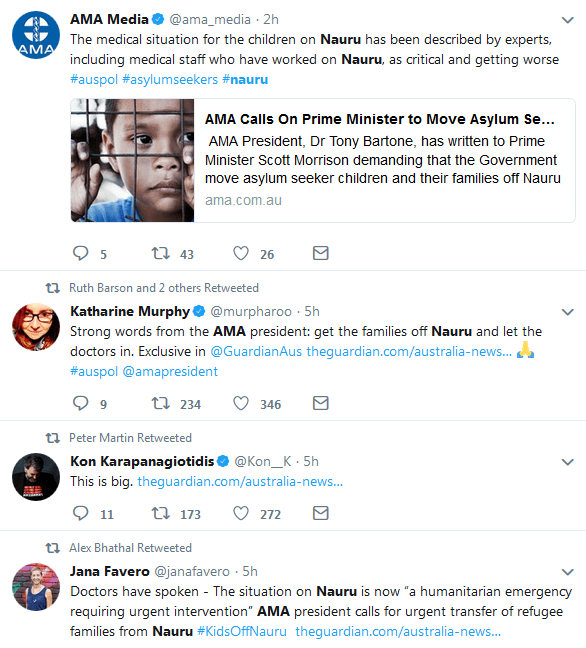