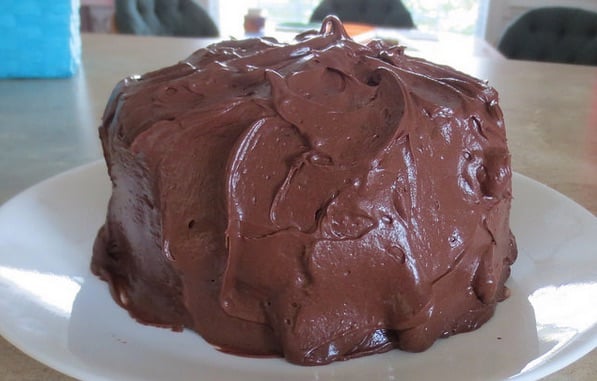 Calling for a vision beyond the short-term carve-up. Image by Jackie O on Flickr.

Shorten missed an important opportunity to advocate for urgent climate action, according to Professor David Shearman who is the Hon Secretary of Doctors for the Environment Australia and Emeritus Professor of Medicine at the University of Adelaide.

Shearman says the 2018 federal budget should have been a piece of cake for climate and health, leadership and democracy. Instead, the carve-up of the budgetary chocolate cake was driven by self-interest, rather than care for future generations.

The budget process reminds me of a children’s party: in comes the chocolate cake, and they sit round the table waiting to see who gets a bigger slice than they do. The house roof is on fire but they cannot be distracted.

After the Federal Government’s 2018 budget made no mention of climate change, as though not mentioning the words would simply make it go away, there was expectation that Labor would bring the issue into stark relief.

Shorten, though, allocated a mere 50 words to climate change in the 4,226 word budget reply document. He also made little mention (15 words) about the growing threat to public interest journalism and therefore to democracy from cuts to the ABC.

Instead, Bill Shorten’s budget reply centres on the traditional battleground of tax cuts for high-income earners and big business over battlers.

Important as wages equity is, where is the plan to address climate change – the greatest threat to health this century?

There were a few crumbs that fell off the table after the cake carve-up.

Shorten did denounce the government for loss of renewable energy jobs while stating Labor’s continued commitment to a 50 per cent renewable energy target by 2030, and a net zero target for 2050.

The issue was picked up by Mark Butler in a media release:

Hidden deep in the Budget Papers is the latest indication that, under the Turnbull Government, there will be a dramatic fall in renewable investment as we transition from the Renewable Energy Target to the possibility of a weak National Energy Guarantee (NEG). After drawing $2 billion for new investment in 2017/18, the Clean Energy Finance Corporation (CEFC) is only drawing $530 million in 2018/19.

Few know the Australian renewables industry better than the CEFC, and this is an ominous sign of an industry getting ready for Malcolm Turnbull’s weak NEG. Under the current weak emissions reduction target of the NEG, analysis has shown there will be no new large-scale renewable energy projects built for the entirety of the 2020s.”

Imagine the impact if Shorten had started his response with plans to finance an emergency infrastructure and social fund to address the inevitable future hardships of climate change?

Already, according to the Business Council, we spend billions of dollars each year on restitution, with the usual state/federal government punch up on where it comes from.

What an educational wake up this would have been for a sleepwalking electorate! At a time when most of the nation listens to what they may lose or receive, what a golden opportunity for a vision for the future – for therein lies true leadership.

Shorten’s speech ought to have said:

Mr Speaker, should we not be thinking about our children’s and grandchildren’s future in this grab for a large piece of the chocolate cake…?

But instead the government supplicates before the altar of neoliberal economics, increasingly a no-go for the land of the fair go. Economics is a fair enough tool to balance the household budget but should not rule our thinking with religious fervour.

Labor will break with the Coalition’s neoliberal dogma, and instead we will focus on the likely parlous state of the world for our children and grandchildren; a world of warming and extreme climate, rising seas and instability, which this government has helped create.

And this journey together will bring a fair go for clean air instead of coal-fired pollution for the thousands of families battling to bring true health into their lives using the human rights of clean air, water, and food. And I will not forget the health inequity of those who continue to suffer near the coalmines and gas fields, which will blight the future for all humanity. Yes, Labor will stand for a fair go for Life …………..

This fair go will result from a new aggressive policy to play a leading role in arresting climate change, so important for our health as well as being vital to our economy.

Not only will every Australian – whether they live in cities, rural areas, regions, the Outback – see the size of their chocolate slice, but they will also know that other humans have more than crumbs.

The government is intent on the evisceration of the ABC, one of the few remaining sources of investigative journalism and especially news of health and the environment and essential to the action of all NGOs.

The Treasurer’s explanation for using the knife was that the media is under severe economic constraints and cut backs, so why shouldn’t the ABC suffer similarly!

We will fight these cuts with fervour and indeed when in power we will strengthen the ABC to counterbalance the concentration of other media.

Let’s face it, free speech is now in a relentless squeeze from an authoritarian clique that has to be appeased for this government’s survival.

As political philosopher Edmund Burke said, “The only thing necessary for the triumph of evil is that good men should do nothing”.

His Irish fervour was unquestioned in minds and hearts of many of the Irish who settled Australia, but is clearly abandoned now.

Mr Speaker, the Opposition is the only party that will deliver an equitable slice of the chocolate cake for all Australians.

In short, safeguarding our health and well-being will be prioritised over vested interests; every man, woman and child will have access to fresh air, clean water and land; oceans, river, seas, native forests and fauna and flora will be protected as health and the environment are indivisible; and we will lead the international battle against climate change with ambitious emissions targets and cutting edge renewables technologies that will stabilise warming and ensure a healthy future for today’s generation and for the generations that follow us.

That is our vision for Australia, Mr Speaker. An Australia that prioritises a fair go for a just chocolate cake carve-up at this budget time.

• Professor David Shearman is Honorary Secretary of Doctors for the Environment Australia and Emeritus Professor of Medicine at Adelaide University.