Home Public health and population health alcohol Are these the best ways to get Australia’s health on track? 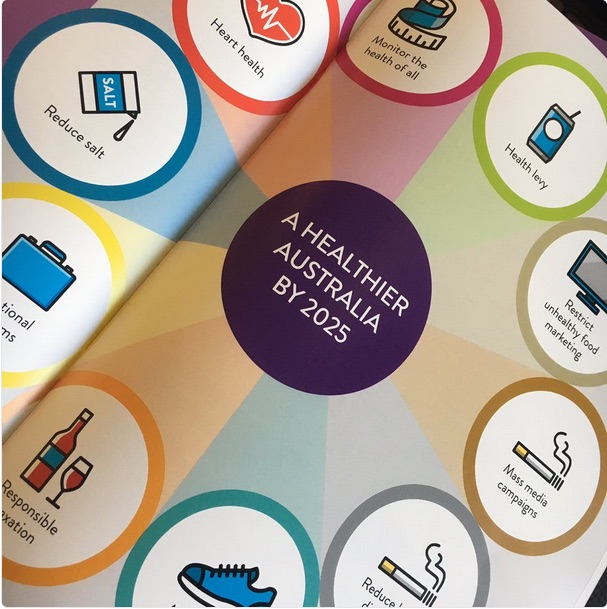 Are these the best ways to get Australia’s health on track?

A new report launched at Parliament House in Canberra today has highlighted ten priority policy actions to prevent and reduce chronic disease, “for a healthier Australia by 2025”.

Its focus is upon interventions to reduce the consumption of sugar, salt and alcohol, and to tackle junk food marketing. It also recommends actions to reduce smoking, particularly by Aboriginal and Torres Strait Islander people and by people with mental illness.

Below, Hazel Fetherston and Rosemary Calder from the Australian Health Policy Collaboration (AHPC) at Victoria University explain some of the context to the new report, Getting Australia’s Health on Track.

At Croakey, we look forward to a future such report addressing the wider determinants of health and health inequalities, within the context of planetary health.

2016 has been a year of significant public health activity: a global movement of countries have begun to adopt a ‘sugar tax’; the United Nations Sustainable Development Goals came into force; Australia’s own report on Australia’s Health 2016 was released and the World Health Organization marked the 30th anniversary of the first global health promotion conference and the Ottawa Charter for Health Promotion.

This month, the Australian Council of Presidents of Medical Colleges announced their six-point plan to tackle obesity, the first time all medical colleges in Australia have come together to tackle rising rates of obesity in the Australian population.

Chronic disease now affects 1 in 2 Australians. Australia has unacceptably high rates of risk factors for chronic disease including physical inactivity, harmful use of alcohol, high salt intake and unhealthy diets. These are major contributors to the rising rates of obesity and of preventable diabetes, cardiovascular disease and some cancers in the Australian population.

The Australian Health Policy Collaboration (AHPC) at Victoria University, with a national collaboration of chronic disease and public health experts, scientists, researchers, clinicians and organisations, has been working to close the gap between current health and public policies in Australia and the evidence of what can be done to contain the growing epidemic of preventable chronic disease.

The collaboration of more than 70 leading Australian chronic disease experts and organisations has developed health targets for Australia to reduce chronic diseases and achieve a healthier nation. A report card, Australia’s Health Tracker, on how Australians fare now against those targets was published this year.

One third of the burden of chronic disease on our population is preventable.   Despite this, there is a low level of investment in the prevention of these diseases.

The AHPC, together with the Australian Healthcare and Hospitals Association and Public Health Association of Australia, today launched a national policy report, Getting Australia’s Health on Track. Speakers at the launch included Professor Tom Calma AO, the Assistant Minister for Rural Health, Dr David Gillespie; the Shadow Health Minister for Health and Medicare, Catherine King; and the leader of the Australian Greens, Richard di Natale.

Getting Australia’s Health on Track outlines 10 priority policy actions for a healthier Australia by 2025.

These policies will get Australia’s health on track towards the health targets for 2025, developed by the national collaboration in line with the global agenda set by the World Health Organization.

While Australia is not alone in facing a rising tide of preventable chronic diseases, as a nation we have been slow to respond to the evidence of how to prevent and reduce the risk factors for these diseases.

The collaboration’s chronic disease report card, Australia’s Health Tracker, is the first of its kind and is unique in showing where policy efforts and initiatives in Australia have had success in tackling some of the risk factors for chronic disease, and where Australia is failing to act.

A healthier Australia by 2025 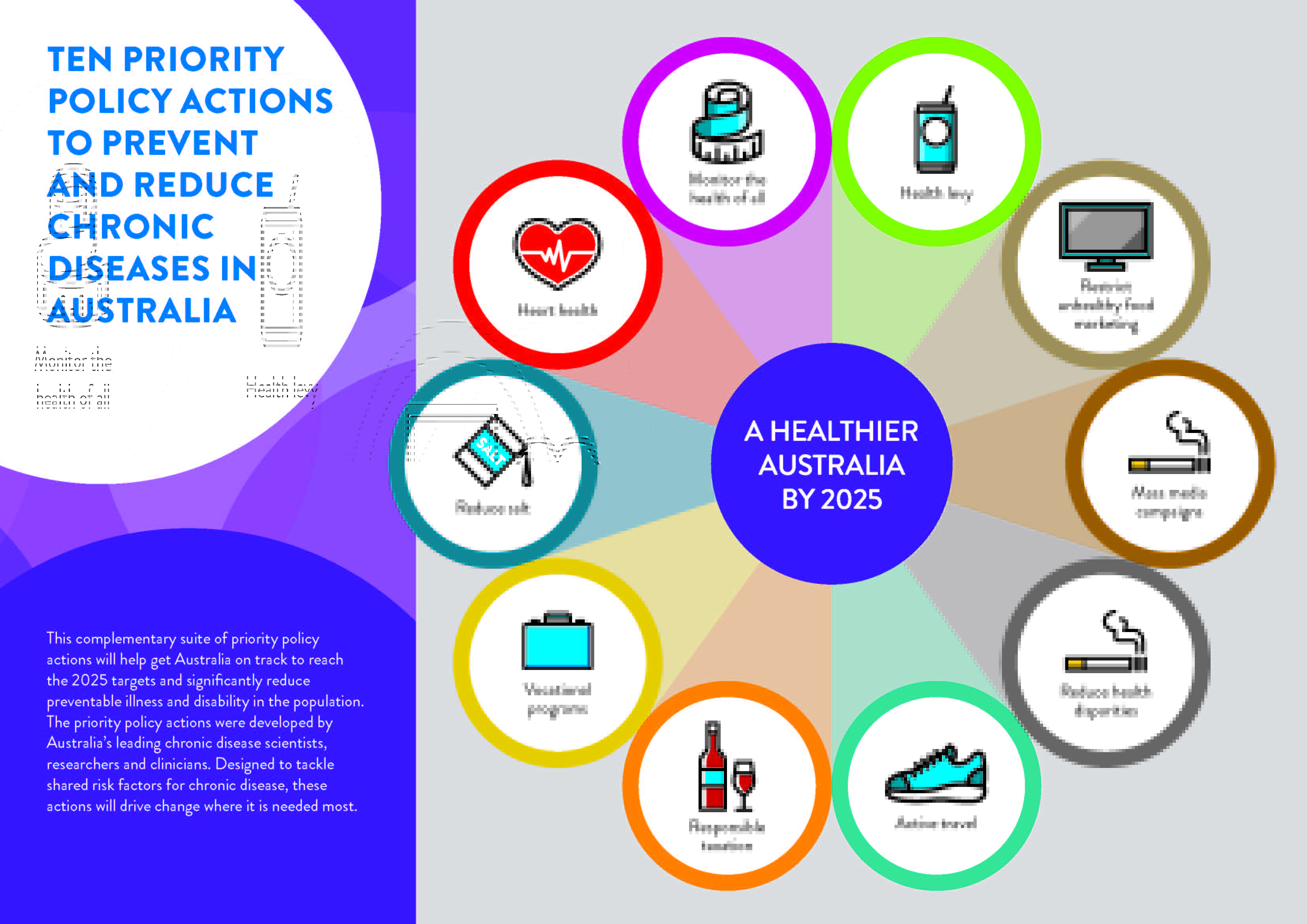 These 10 actions – that are proven to be effective, and can be executed affordably – implement together will build a strong national approach to reducing the national health, social and economic impact of chronic diseases.

Without a systematic, whole-of-population strategy aimed at prevention and early risk management, the ongoing rise in chronic disease will harm more individuals and adversely impact on health expenditure and the broader economy.

They are ten steps in the right direction and are opportunities for governments to work collaboratively to improve the health of the nation.

The World Health Organization recently issued the Shanghai Declaration on Health Promotion and encouraged Governments all over the world to make bold political choices for health.

World Health Organization Director-General, Dr Margaret Chan said: “Legislative and fiscal measures are among the most effective interventions that governments – national and city – can take to promote the health of their citizens, from tobacco control and taxing sugary drinks to ensuring people can breathe clean air, bike home safely and walk to school or work without fear of violence.”

Australians need a healthier future. We can, and we must, do better. 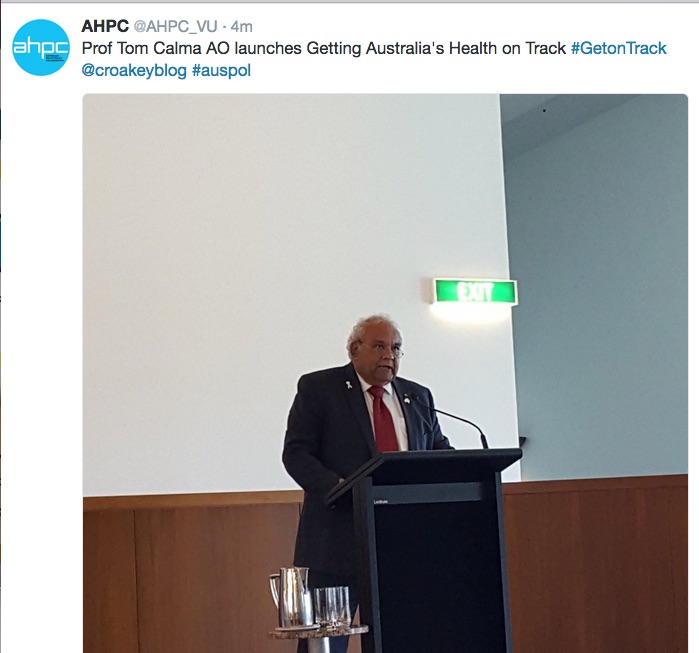 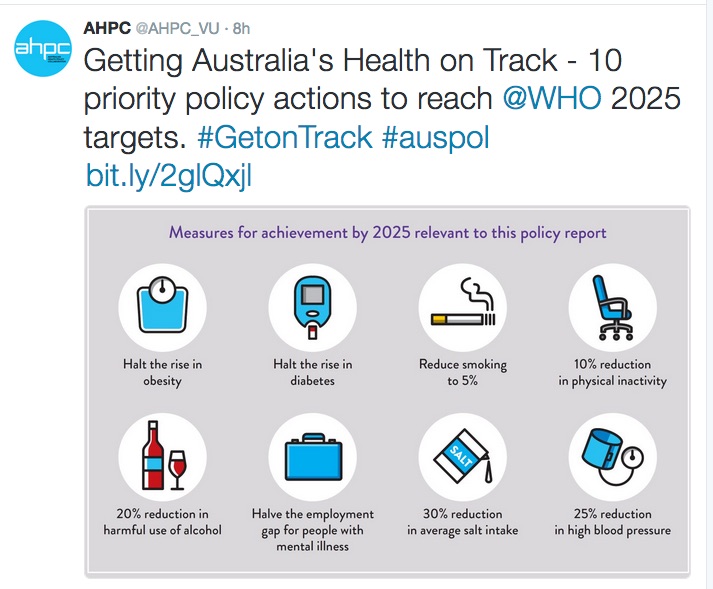 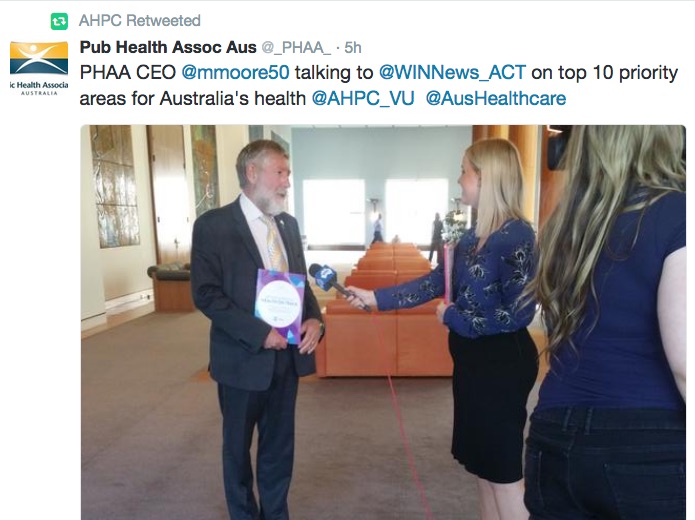 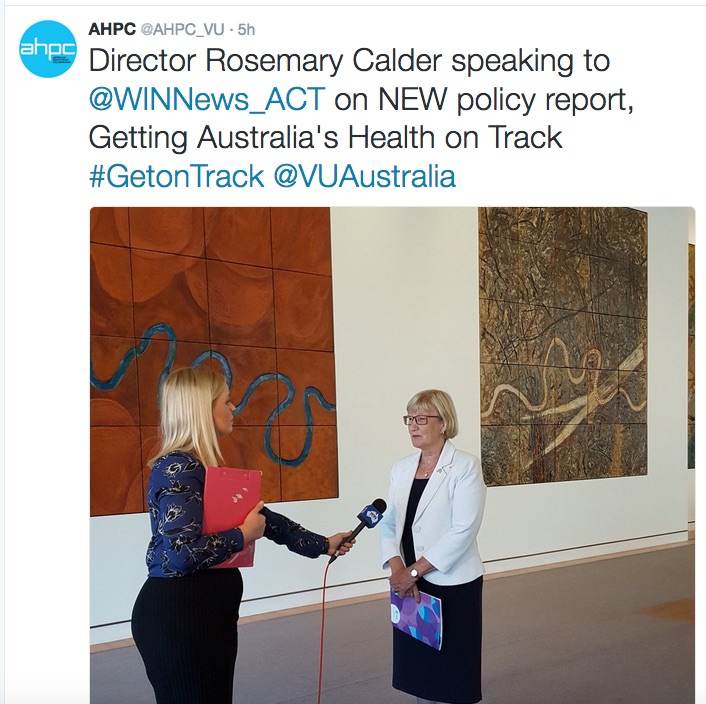 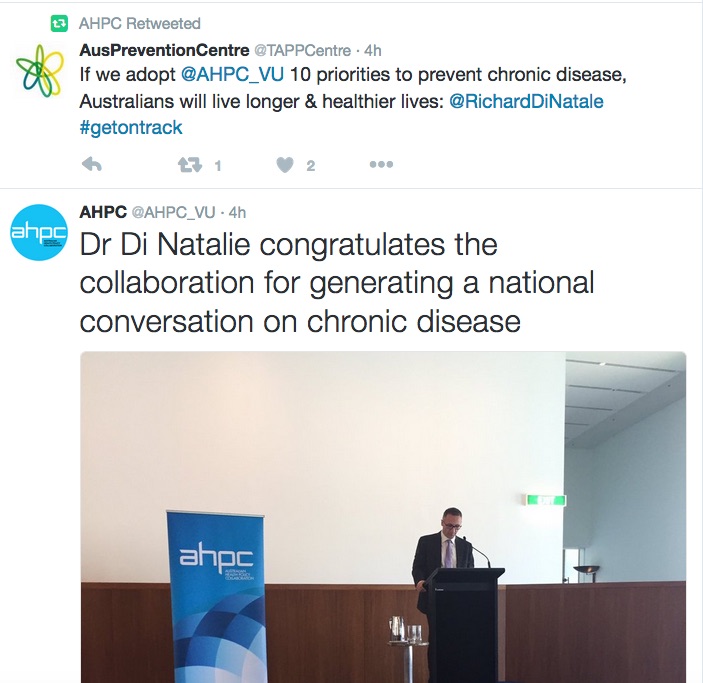