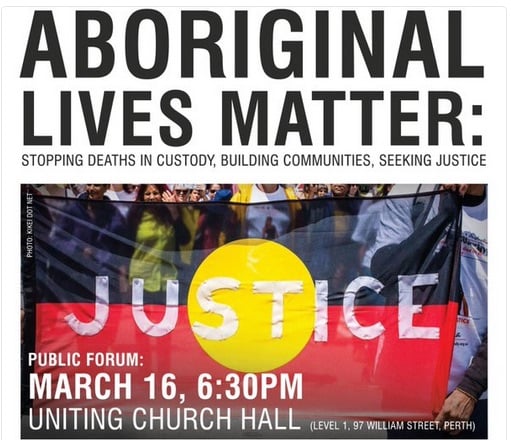 At an event marking the 10th anniversary today of the community-driven Close the Gap campaign, Social Justice commissioner Mick Gooda vowed to continue pushing for justice targets, as essential to improving health and social outcomes.

The focus is firmly on the need for reform in WA in particular, as a coronial inquest resumed in Perth this week into the death of Ms Dhu, a 22-year-old Yamatji Aboriginal woman (whose first name is not used for cultural reasons).

Human rights lawyers have called on the WA Government to stop the practice of locking people up for unpaid fines, and a public forum in Perth last night (as per the feature image above) heard detailed recommendations for change to policing and justice systems in WA.

In the article below, cross-posted with permission from ABC Religion and Ethics, history lecturer Ethan Blue writes that governments must stop seeing punishment as the solution to social problems.

His argument that prisons are central to maintaining modern inequality, suggests that efforts to address the social determinants of Indigenous health must have a strong focus on policing and justice systems.

Seeing Miss Dhu: Time to Turn a Light on Aboriginal Deaths in Custody

She arrived at the lockup with broken ribs and a developing case of pneumonia. She complained of worsening pain and suffering, but attending medical staff and police officers dismissed her as a druggie with “behavioural issues,” faking illness to escape punishment.

They could not see that her pain was real. They saw a black woman, a criminal, whose suffering could be dismissed in the workaday administration of what passes for justice.

Like many Australian women of all ethnicities, Miss Dhu was – according to her family – in a violent relationship. The justice system should have provided her with an opportunity for protection.

Because we live in a society that criminalises Aboriginal people, the officers were more interested in punishing Miss Dhu for her unpaid fines than in protecting her rights, let alone listening to her medical complaints.

The consequences of our society’s preoccupation with seeing black women like Miss Dhu as problems rather than as human beings ought to be the focus of the inquest into her death.

Miss Dhu’s tragic death has led to the highest profile death in custody case since Aboriginal elder Mr Ward’s gruesome 2008 death in the back of an overheated prison van. Despite being such a high-profile case, Miss Dhu’s family is frustrated by the direction and delays of the inquest, which they have called a “betrayal” and “an insult to the family.”

As a result of this frustration, starting in February 2016, allies of Miss Dhu’s family began projecting images of Miss Dhu on prominent buildings across Perth to raise awareness of her death and the importance of her inquest.

Each evening, a small group of people load into their car with a projector and laptop, and travel Perth’s streets.

They find prominent or symbolically resonant buildings – the East Perth lockup, the Western Power building, the Telstra Building, among others. They stop and point the projector, and giant, haunting images of Miss Dhu light the walls and overlook the city. 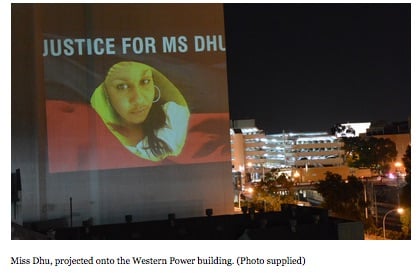 The projections of Miss Dhu, her family and supporters, are an aesthetic and political attempt – modest, incomplete, mournful, angry – to return her to the world from which she was taken too young.

They attempt to reclaim, at least on some level, a space and a presence for Aboriginal women, so long maligned by mainstream Australian society, and among those most profoundly victimised by the ongoing process of colonisation.

By shining a light on places where human rights violations have taken place and on the city’s centres of business, finance and communication, the projections re-claim the surfaces of a city that has grown rich from mining and real estate. Aboriginal people have been locked out of much of this growth, despite the fact that the mineral resources come from Aboriginal lands. 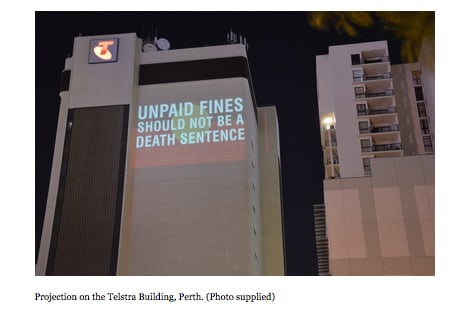 For many, the city is hostile and unwelcoming. It is the seat of a brand of settler colonialism that has overseen the removal of Indigenous peoples from the land to bolster regional mining claims or to facilitate urban shopping and consumer culture.

The projections tell a different story. They help return Miss Dhu’s memory into the night-time cityscape, shifting it into a space of hope and opposition, of mourning and care, a space of survival.

Moreover, the images and associated texts and hashtags – which include #BlackLivesMatter, #IdleNoMore and #SayHerName – connect the Australian struggle for justice to global movements against racism, state violence and neglect in North America and beyond.

As scholars in North America and Australia alike have argued, prisons and policing are central to maintaining inequality at the turn of the twenty-first century.

The images speak to global movements against governments that see more punishment as the answer to every social problem. 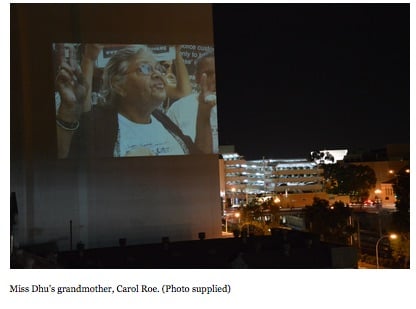 The images of Miss Dhu’s family, which loved her deeply and loves her still, speak to an ethic of care rather than control, of community building instead of community imprisonment. Of calls for sovereignty of the body and spirit, as well as sovereignty over political futures – a sovereignty that, as Perth’s Nyoongar and other Aboriginal and Torres Straits activists remind us, was never ceded, and in which Aboriginal women, young and old, play a central part.

After her family and supporters marched in protest to Parliament House in Perth, Premier Colin Barnett claimed a special interest in Miss Dhu’s case. His promise to seek justice in her case and address the over-imprisonment of Aboriginal peoples is laudable.

Yet the suite of proposed reforms – from Custody Notification Services to addressing the number of women imprisoned on remand or for fine default, especially at the grossly overcrowded and woefully inadequate Bandyup Women’s Prison – have all fallen short of the mark.

It is possible that the inquest will address the structural racism, sexism and dispossession that continue to animate our history and which led to Miss Dhu’s death.

Nearly 25 years ago, the Royal Commission Investigation into Aboriginal Deaths in Custody issued 339 recommendations addressing the political and material conditions that lead to deaths in custody. Relatively few of these have been implemented.

Martin Luther King, Jr., suggested that the moral arc of the universe is long, but that it bends toward justice. But King also knew that it didn’t bend by itself, that grassroots and social movements for justice led the change.

The inquest into Miss Dhu’s death resumed on 14 March, at the Central Law Court in Perth. It is open to the public. The optics of the court, and of this government, around racism, justice, prisons and policing, remains to be seen.

• Ethan Blue is Senior Lecturer in History at the University of Western Australia, specialising in the history of punishment, immigration history and labour history. He is the author of Doing Time in the Depression: Everyday Life in Texas and California Prisons.

• Croakey extends our warm thanks to ABC Religion and Ethics for permission to cross-post this article.