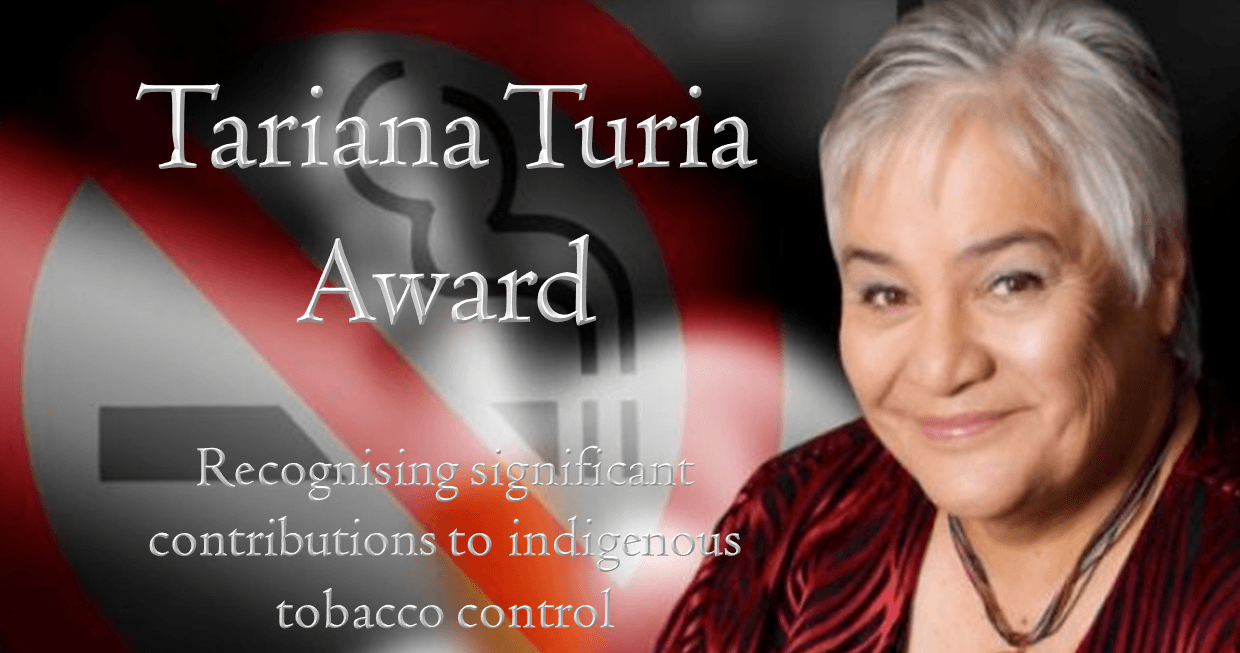 Following 11 years of delays, major tobacco companies this week began airing advertisements across all media in the United States on the lethal nature of tobacco, finally complying with a court order that found the tobacco industry had violated civil racketeering laws and defrauded the American people.

As this glimpse (below) shows, these advertisements lack the big spending creativity that was the hallmark of cigarette advertising for decades, but even so there is something to behold in seeing tobacco companies forced to declare publicly that smoking kills and that cigarettes are designed to get people addicted.

Public health advocates here have called on tobacco companies to “provide the Australian public with the same truthful health information”.

Watch the video from Make Smoking History and Cancer Council Western Australia below, and check out all the background on the US decision at their campaign website here.

As this final story in Croakey’s coverage of the recent Oceania Tobacco Control Conference in Hobart shows, the need for vigilance on the harm of tobacco and threat of the industry is ongoing. Groups most at risk include Indigenous people in Australia, New Zealand and across the Pacific.

Former Maori Party MP Hone Harawira was awarded the inaugural Dame Tariana Turia Award at the conference for his work highlighting the impact of smoking on Maori and Pacific Island people in New Zealand. He wants to take legal action against Big Tobacco further – to sue tobacco companies for the toll they inflict on Indigenous communities.

See also below for Q&As with delegates at the conference, including an emerging star researcher and views from the Solomons, plus some final tweets and Twitter analytics.

The 2017 Oceanic Tobacco Control Conference has called for greater regional and global efforts to recognise and address the disproportionately detrimental impact of commercial tobacco products on the health, economic and cultural wellbeing of the Indigenous peoples compared to other populations within the Pacific/Oceania. 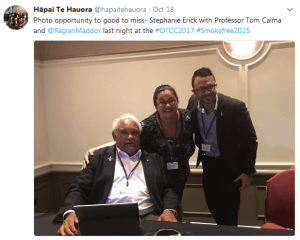 The preamble of the Indigenous Statement developed by Indigenous delegates from Australia, New Zealand and the broader Pacific at the conference, said:

“We, the Peoples who identify as the Indigenous peoples of the lands of Oceania and the Pacific, and supporters who attended the Indigenous Tobacco Symposium at the 2017 Oceania Tobacco Control Conference note that the international evidence and experience clearly shows that: 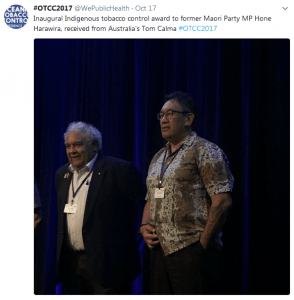 It was named for Turia, former co-leader of the Māori Party and known as a fearless advocate for tobacco control and champion for reducing inequalities in Māori smoking rates in New Zealand.

And the inaugural award went to her former parliamentary colleague, Hone Harawira, who was the “driving force” behind the Māori Affairs Select Committee’s decision to undertake an inquiry into the tobacco industry and the impact of smoking on Māori. It was the catalyst for the Government’s Smokefree New Zealand 2025 goal which aims to get overall smoking rates down to under five per cent, currently at around 15 per cent.

“Nothing works beyond being strong, being committed and being courageous and not taking a backwards step.”

“It doesn’t matter what it is, it doesn’t matter whether it’s land rights, health of the people – if you know what needs to be done, then do what needs to be done. You will cop flack, you will often get told off by your own and I did by many of my own who were smokers but at the end of the day you have to ask yourself why we are doing this and we’re doing this because our people are dying, our people are being killed by Big Tobacco.”

Watch this interview with Harawira: 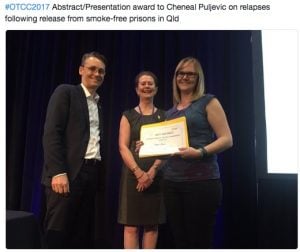 Cheneal Puljevic is a Doctoral Candidate at the Griffith Criminology Institute at Griffith University. Cheneal’s doctoral thesis is investigating former prisoners’ return to tobacco smoking following their release from smoke-free prisons in Queensland. She won the #OTCC2017 Best Abstract and Presentation Award.

Dr Geoff Kenilorea is Director – NCDs/ Tobacco Control Country Focal Point, at the Ministry of Health and Medical Services in the Solomon Islands.

Geoffrey Alacky is the team leader of the Global Youth Leadership Nexus in the Solomons and a senior member of the nation’s tobacco control technical advisory group.

Q1. What is your main takeaway/reflection from the conference?

A common theme throughout the conference is that we need to be focusing our efforts on tobacco strategies that aim to reduce tobacco use among vulnerable populations, such as people with mental health or substance use issues, or prisoners.

Q2. What were the standout presentations and why?

Cheneal Puljevic:  Michelle Scollo’s presentation on industry responses to tax increases was informative and enlightening – we need to be addressing the bigger cigarette pack sizes (e.g. 40-50 cigarettes per pack) as these are resulting in more affordable options for tobacco users. Ray Lovett’s presentation on smoking prevalence among Indigenous populations was affirming in terms of the decreasing rates; our efforts at reducing tobacco use among Indigenous communities are working! 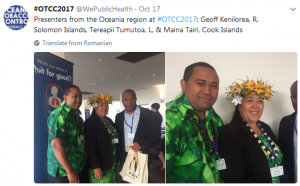 Integration of taxation and licensing is paramount – not just having one or the other as licensing – empowers regulators to ensure limits and taxation impeaches on the habits.

Use of digital media – social media: Solomon Islands will need to enter into this space as a means to collate support as well as informing the populace.

Tightening up legislation to include private homes and private vehicles – in the Solomons we are just controlling, or should I say still trying to control that the public environment is kept smoke-free, looking at hospitals, workplaces, schools, public transport, hotels, restaurants, bars and night clubs but venturing into private homes and private vehicles has the potential.

Q3. Taking up from Michelle Scollo’s presentation on Day 1, what do you see as the biggest challenge and/or the biggest opportunity looming in tobacco control (for your work, your community or generally)? What would be an easy win?

Again, the biggest challenge is reducing tobacco use among vulnerable populations such as people with mental health or substance use issues, prisoners, and Indigenous communities. Many people in these populations do not want to quit for various reasons, and so we need to focus on increasing motivation to quit, and the provision of (nicotine replacement therapy) to overcome nicotine addiction.

Information is always an asset and sharing of information to get a greater audience will go a long way and is an opportunity.

On the technical front – if we are looking for a silver bullet, I still see taxation as a good weapon.

The challenge that the industry (big tobacco) poses is ever present and continues to be a major challenge – so yeah the biggest challenge for me would be tobacco industry interference – mentions of the industry being inside the pockets of politicians and leaders.

Q4. What do you want to see discussed (or discussed more deeply) at #OTCC2019?

I would like to see more of a focus on interventions addressing tobacco smoking among priority populations; what works and where should we be focusing our research?

With all the presentations it would be great to also discuss action points and recommendations that countries can take home at the end of the conference. Was there any possibility to forming an OTCC secretariat to keep discussions going in between the two yearly conferences?

We wonder, rather than being a topic for discussion, whether a market place can be provided for countries to showcase their achievements and success stories as well – as former Maori Party MP Hone Harawira alluded to – rather than research taking up the whole time, maybe such market places can provide countries to also tell their stories from a poster, slides etc. This could be done informally.

Time for a Pacific #OTCC

Watch also this video interview with Stephanie Erick who is the Senior Advisor for the new National Tobacco Control Advocacy Service at Hāpai Te Hauora Māori Public Health. She called at the conference for an OTCC event to be held in one of the Pacific nations soon. 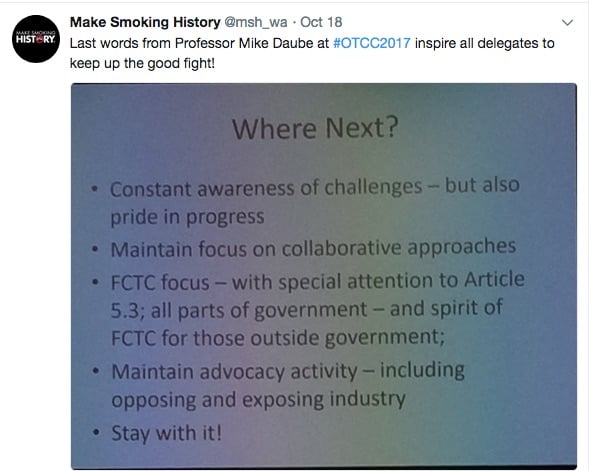 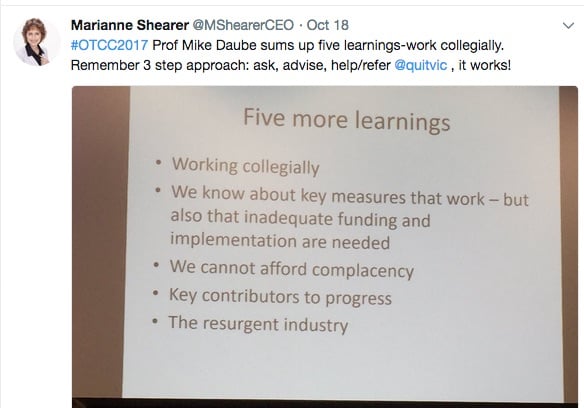 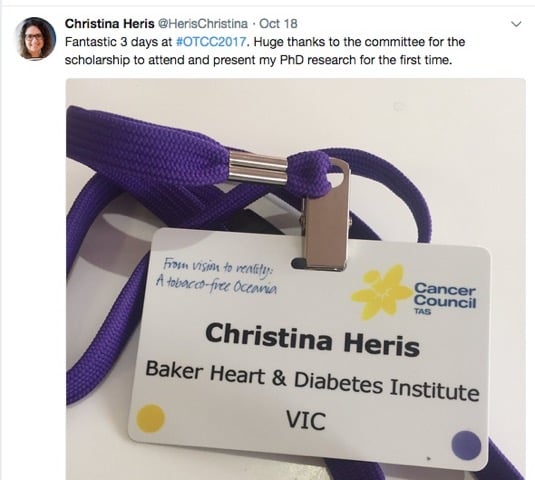 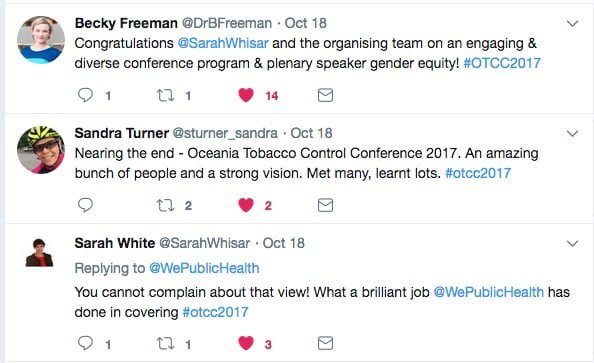 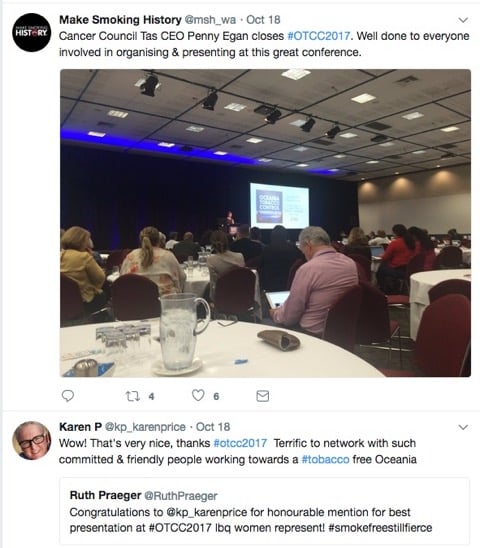 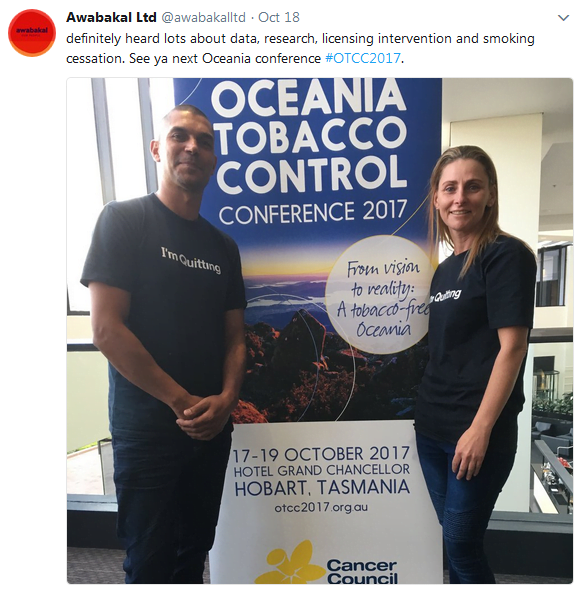 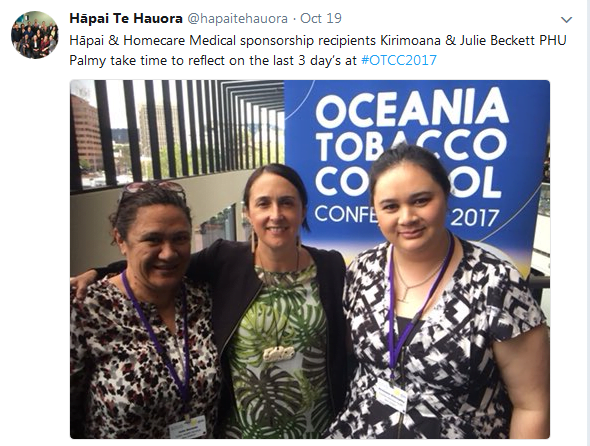 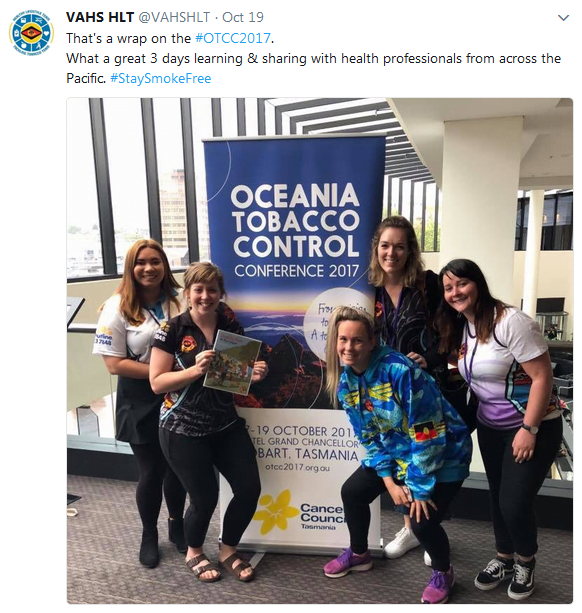 You can read the full transcript of #OTCC2017 tweets here 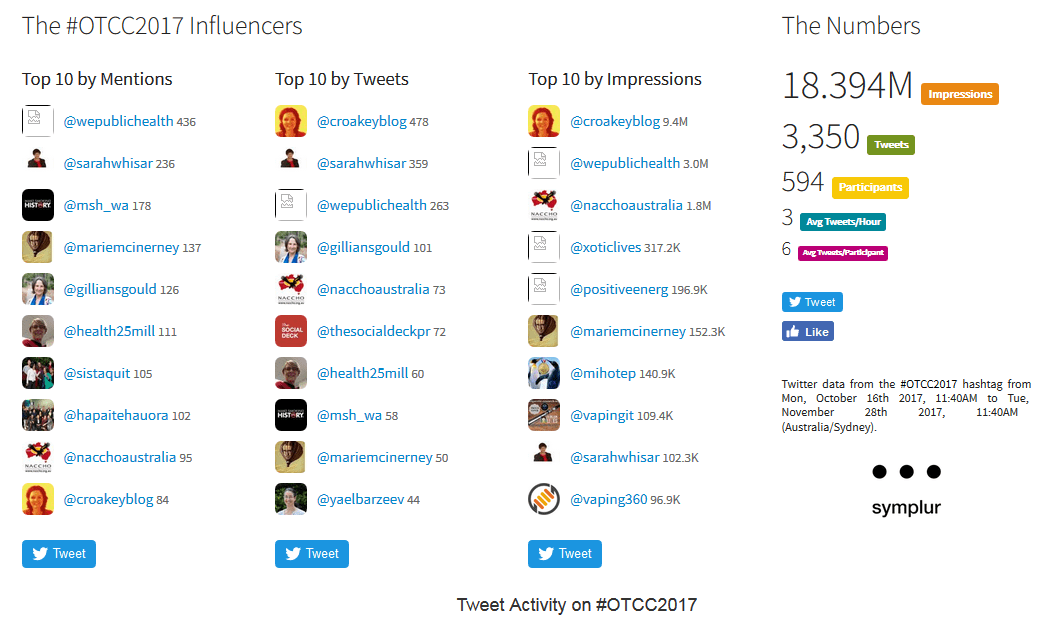