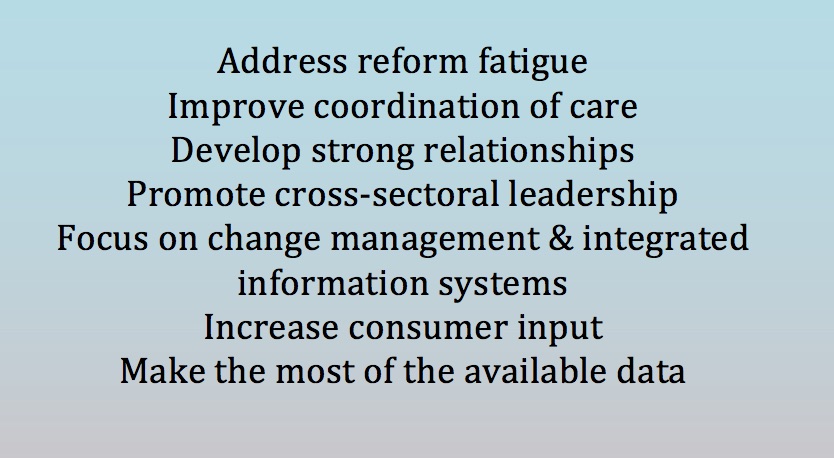 At a time of “reform fatigue”, some timely advice for improving primary healthcare

Researchers identified many challenges and opportunities for the never-ending cycles of primary healthcare reform at the recent Health Services and Policy Research Conference in Melbourne (#HSR15).

“Reform fatigue” was how one delegate at #HSR15 described the syndrome affecting the Primary Health Care sector in Australia.

Moving from Divisions of General Practice to Medicare Locals to Primary Health Networks in the space of five years or less, this sector has experienced more than its fair share of change, as the organisation, governance arrangements and expectations of ‘primary health care meta-organisations’ have shifted in response to changing government priorities.

Some level of cynicism about the benefits of these changes was evident in the presentations at #HSR15 (one was titled ‘Old Wine in New Bottles’!).

However, there was also a degree of optimism about the future of the new Primary Health Networks (PHNs) and an interest in exploring the Australian and international evidence to support their role in improving outcomes in primary health care.

One popular session focused on PHN governance arrangements and provided a number of different perspectives on how these new organisations could benefit from the findings of recent research in this area.

Coming from the UK, Associate Professor Helen Dickinson of the University of Melbourne has extensive direct experience of the commissioning role of primary health care organisations in the National Health Service. She gave a presentation drawing on her UK-based experience and research, which focused on the role that these new organisations will have in commissioning health services.

Dickinson noted that unlike Medicare Locals and their predecessors (Divisions of General Practice), PHNs have been given an explicit commissioning role, with the goal of improving service efficiency and effectiveness, as well as improving coordination of care in particular for groups at risk of poor health outcomes.

She argued that in order to achieve these aims, PHNs will require a sound understanding of their role in commissioning health services and also the required knowledge and skills to undertake this role. Her international research into this issue suggests that there are no simple guidelines for commissioning in the health sector, a process that she described as ‘challenging’ and as ‘more art than science’.

One reason for the lack of clarity around the commissioning role was that the concept itself is often not clearly defined and often has different meanings for different stakeholders. Her current research with PHNs and stakeholders has found that this lack of clarity also exists within the Australian health sector. She argued that unless this is resolved it could result in confusion between and among PHNs and government about their roles and aims.

Dickinson recommended that agreeing on the precise definition of commissioning should be a first step, along with ensuring that the relevant PHN staff have the training and experience required to deal with the technical aspects of commissioning, such as contract management.

However, she also stressed the importance of not letting ‘process issues’ dominate and for PHNs to ensure they also focus on building strong relationships with providers.

Her presentation focused on a study on improving access to care undertaken by a team of researchers across NSW, Victoria and South Australia, including Dr Christine Walker from the Chronic Illness Alliance.

The research involved a comparative case study of six integrated primary health care centres in NSW and Victoria and included a range of models such as GP Super Clinics, community health centres and traditional GP practices. A major aim of this project was to identify the factors that have the greatest influence on the performance of this type of health service.

The research included looking at a range of elements of access, including availability, accommodation, approachability, affordability, acceptability and appropriateness. Ward reported that the study found significant variability between the models, and that these were influenced significantly by organisational and contextual factors, such as contractual arrangements, governance arrangements and GP supply.

Ward used these findings to demonstrate how policies can be developed to influence these factors and therefore support increased access. These could include increasing the supply of GPs in areas of need, supporting bulkbilling and including specific access requirements in contracts.

She also made the point that while there is extensive research demonstrating the benefits of high quality integrated primary healthcare for both identifying and treating chronic conditions, there is much less literature on how health services can achieve this aim.

She argued for the need for more research into this issue in the Australian context in order to support PHNs to achieve their aim of improving access to care.

Caroline Nicholson, Director of the Mater/UQ Centre for Primary Health Care Innovation, also reported on research she had undertaken on integrated primary and secondary health care governance, in conjunction with a group of colleagues, including past RACGP President Professor Claire Jackson.

She argued that the primary and secondary health care sectors need to be better integrated if the goals of health reform – such as improving outcomes for people with complex and chronic illness – are to be realised. This requires leadership from both sectors and her research focused on the views of board members and CEOs of PHNs as to how this can be achieved.

Her assessment of progress against these elements in the current reform environment was that while gains had been achieved in some areas, for example, in consumer engagement, there were other areas in which little progress had been made, such as in change management and integrated information systems. She argued that unless these areas were addressed they could undermine the capacity of the reforms to successfully achieve integrated care.

Some additional tips for those working in the primary health care sector came in the closing plenary session of the conference, with two of the visiting US experts reflecting on the main themes of the conference and providing some advice on future directions for HSR.

Dr Amal Trivedi from Brown University in the US  noted that equity was a running theme of the conference, encompassing equity between different population groups, geographical areas and socio-economic levels.

He said it had become clear over the three days of the conference that it was impossible to evaluate quality or outcomes without also considering equity. This approach he described as ‘third generation’ equity studies, where equity is integrated into all aspects of a health service and program and considered in its broadest sense, as defined by consumers and the community (rather than by providers or managers).

He also described stakeholder engagement in Australia as more advanced than in the US, and specifically mentioned the multiple ways in which stakeholders are involved in health service planning, delivery and evaluation as a key strength of our health system.

In terms of a future direction for health services research in Australia, he highlighted the comments from patient advocate and consumer Jen Morris who described consumers as “the most under-utilised resource in the health system”, and supported her call for increased consumer input into health service delivery.

In her closing comments, Professor Sherry Glied, from New York University, reflected on three aspects of Australian culture that impressed her during her visit: the high Australian minimum wage (in comparison with that in the USA); the efficient public transport system (in Melbourne); and the respect shown to Aboriginal and Torres Strait Islander people.

While she did not elaborate on the health impacts of her observations, it is interesting to note that all three of these factors have significant implications for population health.

Glied also described a number of challenges in the Australian health system – in particular, she said it was tough to manage a system in which there were divisions in the responsibility for health care, for example Federal/State and public/private, with multiple points of interaction and a lack of transparency around funding arrangements.

She noted that this complexity can result in both gaps and duplication in services, and also uncertainty for consumers.

Her parting advice for health service researchers in Australia was to make the most of the data that is available to them. While it might be frustrating not to be able to use data that is being collected, she advised that there is often a great deal that can be achieved through de-identified and aggregate data.

Glied advised researchers to develop relationships with bureaucrats and to listen to their priorities and concerns, saying that “it’s impossible to come up with the answers that governments need unless you know the questions that are being asked.” 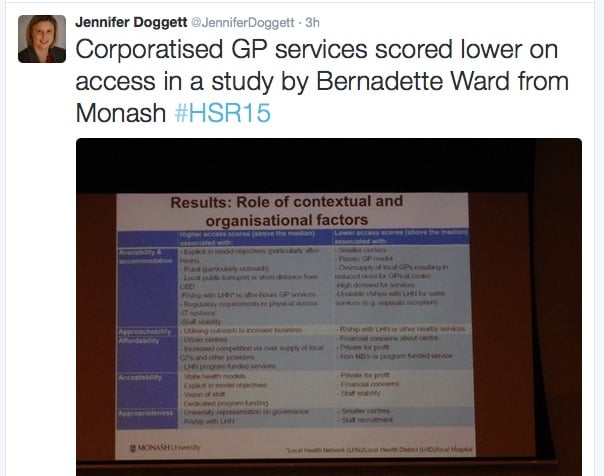 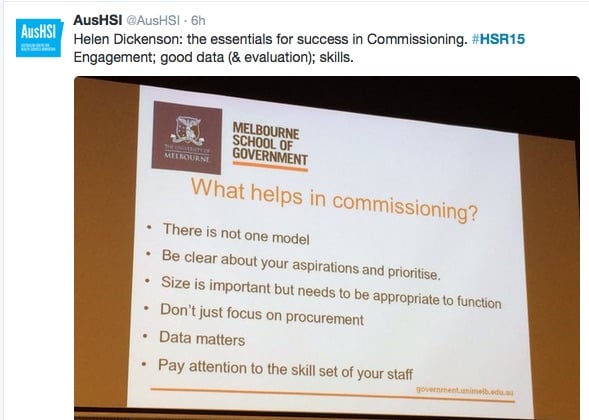 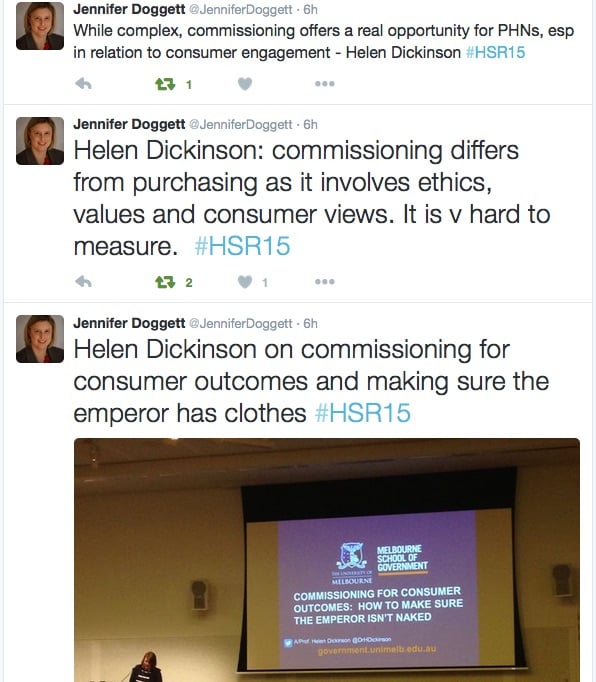 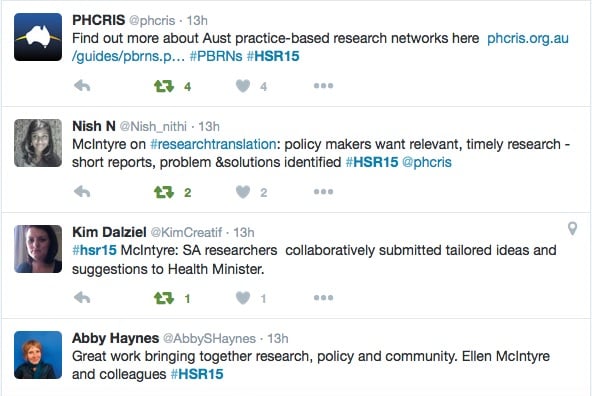 ***
• Jennifer Doggett is covering the conference for the Croakey Conference News Service.