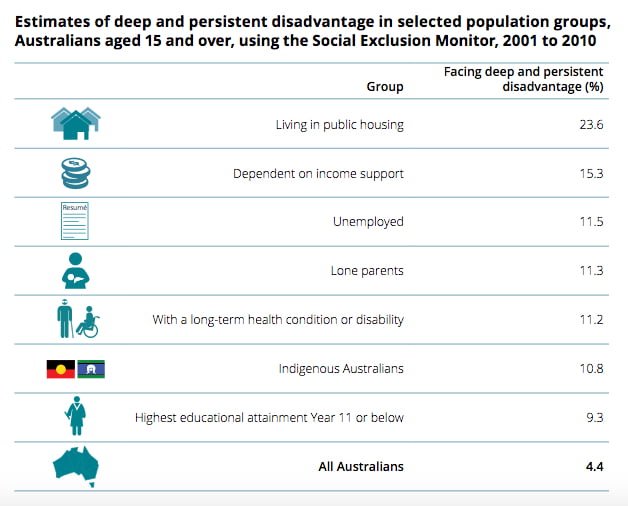 Australia ranks in the bottom third of the OECD for work-life balance and is performing poorly on Indigenous disadvantage, with increasing numbers of people also accessing homelessness services due to family violence, and more children in foster care, according to a major new report on the nation’s welfare.

Australia’s Welfare 2017 was unveiled by the Australian Institute for Health and Welfare on Thursday, showing progress across a range of indicators as the nation marks Anti-Poverty Week.

The biennial report card showed Australia was 27th out of 35 OECD countries for work-life balance, with 20% of men and 7% of women reporting working more than 50 hours per week, said AIHW Director Barry Sandison.

Home ownership was in marked decline, particularly for young people — now at 45% from 51% 10 years ago for those aged 25-34 and 62% for those aged 35-44, from 68% a decade earlier. Overall, Australia is in the lowest quartile of OECD countries when it comes to home ownership, said Sandison.

“The financial impact of increased house prices and higher education costs are just some of the factors affecting the ability of younger generations to save for a deposit,” he said.

Spending on safety nets had increased to $157 billion, comprising 9.5% of GDP, compared with $117 billion a decade ago, and the welfare workforce (including childcare, aged care and disability support workers) had expanded 84% — four times the rate of the total Australia workforce over that period.

The number of people accessing homelessness services had increased by a third over the past five years, with 38% experiencing family violence. During this period, the number of children in foster and other out-of-home care had increased 17%.

Deep and persisting disadvantage persisted for some 4.4% of Australians, including key groups as detailed in the graphic below.

The report found widespread socioeconomic disadvantage and health inequality for Aboriginal and Torres Strait Islander communities, with contributors including discrimination, racism, violence, drug and alcohol use and high psychological distress. This fed into a vicious cycle impacting employment, income, living conditions and opportunities, the AIHW said.

Some of the key indicators highlighted in the report include:

“The reasons for these disparities are complex, and include dispossession, marginalisation, and racism, as well as the ongoing and cumulative effect of past policies of forced removal and cultural assimilation,” the report says. 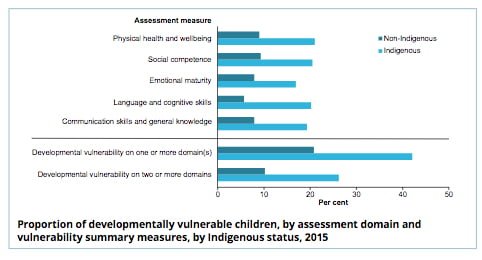 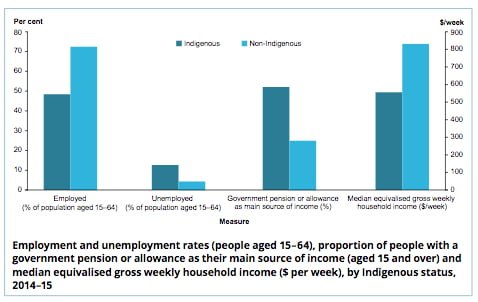 Australia compared “exceptionally well” to other countries on the United Nations Human Development Index — an aggregate measure of life expectancy, education and standard of living — ranking second after Norway.

Though less outstanding on subjective measures of happiness, the report said we still fared well, coming in at 9th globally (again, after Norway), in the 2017 World Happiness Report.

Compared with OECD countries, we rated in the top third for the majority of measures, but slipped into the middle third for job security, wealth, employment, educational attainment, homicide rate and substandard dwellings. 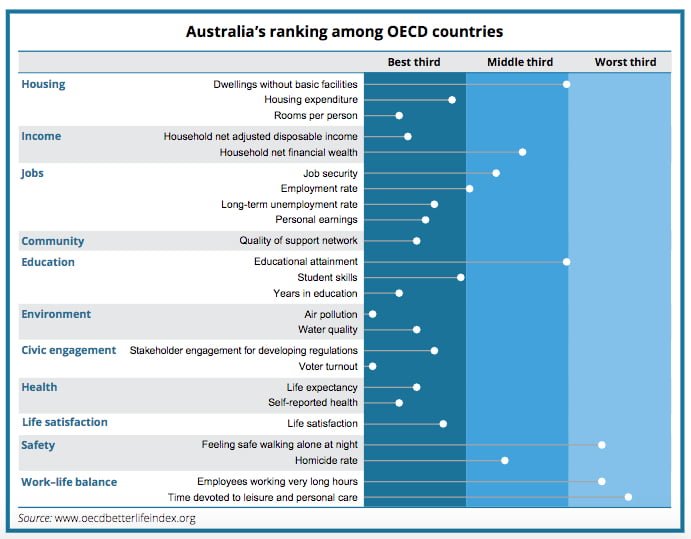 It’s worth exploring the full report, and the AIHW has also produced an excellent in brief summary. You can also read the media release.