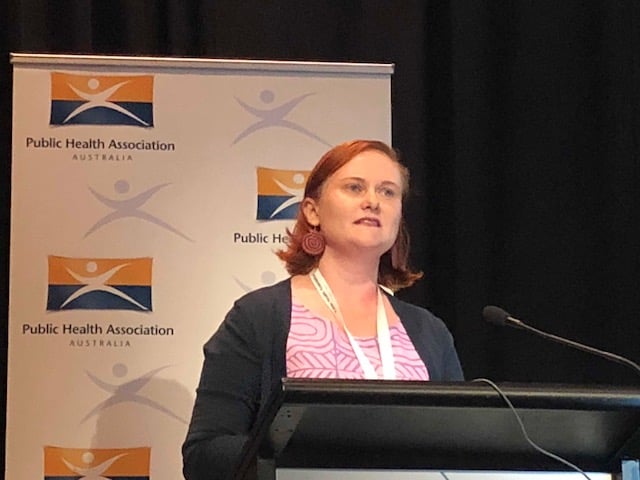 Introduction by Croakey: In an introductory post at Croakey a few days ago, we flagged our intention to publish four outstanding essays from the Public Health Association of Australia’s (PHAA’s) National Public Health Student Think Tank Competition.

The competition was established and delivered by the PHAA’s Students and Young Professionals in Public Health (SYPPH) Committee, “as an opportunity for students to engage with current issues in public health, showcase their innovation and interact with established professionals.”

Below we publish the first of the essays in the Unmet Needs in Public health series: the winning entry, by GP, public health doctor, PhD candidate and Head of Strategy for END RHD, Dr Rosemary Wyber.

In her essay, Wyber argues that there is often too much haste and too little co-ordination, consultation and and quality control in initiatives to improve Aboriginal and Torres Strait Islander health.

She comes up an idea that is novel but not without precedent, to aid transparent decision-making in the sector.

The unmet health needs of Aboriginal and Torres Strait Islander people in Australia are glaring. The need is writ large in life expectancy disparity and writ small in the million different distillations of institutionalised racism.

After a decade of Commonwealth efforts to Close the Gap there has been only sporadic success. Positive outcomes are slivers of opportunity, not the irrevocable paradigm shift towards health equity which is so sorely needed.

There remains a desperate need to ‘do something’ about Aboriginal and Torres Strait Island health outcomes. That void is too often filled by bluster or vested interests.

It is seductive for individuals, researchers and programs to claim they have the answer; that if we could only fix this one disease, this one infection, this one organ, we would learn enough to scale up the solution for everything else.

The loudest voices, with the most apparent certainty, often take centre stage.

This clamour is overwhelming for everyone involved. Aboriginal and Torres Strait Islander communities commonly describe being swamped with requests for consultation, engagement and research. The process of consultation is particularly fraught when little known diseases are addressed in settings of low health literacy.

The recent, rapid, elevation of HTLV-1 from media focus to funded federal priority exemplifies this complexity. It is difficult to gather a meaningful sense of community priorities if the people asking about problems are also the people offering solutions.

Governments are similarly inundated by earnest, well-meaning delegations clutching reports and roadmaps. Each one has ever more compelling infographics but each one is different.

A lack of agreed standards

There’s no empiric evidentiary standard, no agreed figures or format. In this structural free-for-all it’s unnecessarily difficult for the Department of Health and others compare like-with-like and to make evidence-based funding decisions.

It is critical for Australia to make the collective best choices to improve Aboriginal and Torres Strait Islander health. We can’t afford to get this wrong. The criticism that considerable money is being spent, but nothing is changing, is already well entrenched .

Neither part of that statement is true – but without a clear process for making rational investments it is laborious to rebut. Public health leadership is needed, to support decision makers in Aboriginal and Torres Strait Islander communities, and governments, to decide where to focus.

The PBS: a model for transparent decision making

The Pharmaceutical Benefits Scheme (PBS) offers some illustrative lessons. To have a drug funded through the PBS, sponsors need to demonstrate the burden of disease and the need, model the effects, and justify the price. The structure of applications is consistent and comparable.

The Pharmaceutical Benefits Advisor Committee (PBAC) is an independent expert body, appointed by the Commonwealth, to assess these applications. PBAC publishes detailed summaries of their decisions and rationale . The decisions can be controversial, but they are almost always comprehensible.

Aboriginal and Torres Strait Islander health programs need similar rigour. The risk of unintended consequences and diffusion of funds is too great for priorities to be set without this level of transparency and evidence-based analysis.

Decision making does not necessarily need to be imbued with the cost-effectiveness lens of PBAC; equity and impact could be established as alternative guiding principles. Leadership by Aboriginal and Torres Strait Islander people should be enshrined to elucidate values and ensure accountability. In the meantime, decision-making-by-media and founded on flashy documents needs to end.

Disease specific approaches aren’t inherently bad – there’s good evidence that they can strengthen health systems and that lessons from one disease may be applicable to others.

Disease control targets are more tangible, and offer more accountability, than the overarching goal to Close the Gap in life expectancy. A focus on key priority areas is useful. However, the status quo doesn’t offer transparency about how programs for different diseases become funded priorities in Aboriginal and Torres Strait Islander health.

Prioritisation is often a political decision. Many of those decisions are sensible but sometimes they’re made speedily, amidst media glare.

It would be better, and safer, to temper political imperative with independent evidence. To have Aboriginal and Torres Strait Islander people set core principles. To ask research and advocacy groups to spend less time on graphic design and more time addressing established evidentiary standards.

Public health advocates should improve the quality of information other people need to make their own choices, instead of lobbying in the areas of our respective interests. It should not be necessary for disease control strategies to be presented alongside a public relations campaign.

There will always be some need for swift responsive action, but the foundation of decision making should be consistent and considered. 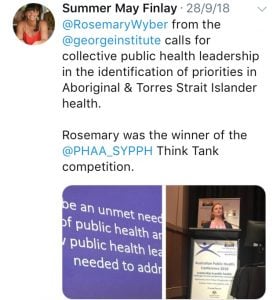 Dr Rosemary Wyber is General Practitioner who completed her medical degree in New Zealand, her Masters of Public Health at the Harvard School of Public Health and her General Practice training in Aboriginal Community Controlled Clinics in the Northern Territory of Australia. Her primary research interest is rheumatic heart disease in Indigenous and resource-limited communities worldwide. Her PhD at The George Institute for Global Health focuses on developing an ‘endgame’ for rheumatic heart disease in Australia. Rosemary is also Senior Adjunct Research Fellow at the University of Western Australia, and the Head of Strategy for END RHD. Following her doctoral studies, she plans to continue triangulating clinical, research and policy needs in Aboriginal and Torres Strait Islander health and primary care. On Twitter @RosemaryWyber