Australia to outsource response to #Ebola in west Africa

The Federal Government has finally responded to growing criticism of its failure to contribute to international efforts with Ebola in west Africa.

Prime Minister Tony Abbott today announced the Government will contribute up to $20 million over the next eight months for a 100-bed Ebola treatment facility in Sierra Leone.

His announcement has been broadly welcomed although the decision to contract a private health service provider to run the facility has raised questions.

Abbott’s statement only said it was “in discussions” with Aspen Medical over the role, but the company is already looking to recruit for the contract

“We know that there are people in the AUSMAT teams that have done work in places like the Philippines who are prepared and ready for deployment, and who would volunteer to go and do this work,” AMA President Brian Owler said. “There are pre-existing facilities and personnel that we can actually use for treatment in west Africa.”

Owler said he would be speaking with “a number of people” at Aspen in coming days to ensure that the people it was hiring and deploying to west Africa would have the training and resources they need.

The AMA noted that this is the latest major government health contract awarded to Aspen Medical, which had also been subcontracted by Medibank Private offshoot Medibank Health Solutions to provide on-base health services for Australian Defence Force personnel. Read its full statement.

Until now, the Government strongly resisted pressure to respond to the Ebola crisis, despite direct requests from both the UK and USA Governments, saying it would not deploy Australians to Ebola-affected countries without a credible plan for their treatment or medical evacuation. Today it said it had received “credible assurances” for in-country treatment and medical evacuation for Australian volunteers who provide health care in West Africa.

See Abbott’s statement on its response, which includes:

The Australian Healthcare and Hospitals Association (AHHA) applauded the Government for the shift, while the Public Health Association of Australia (PHAA) welcomed the announcement as “a massive step forward” but said it is concerned it “may still be too little too late”.

The PHAA called on the Government to also:

See this earlier report from The Canberra Times about the company’s work in Africa, and its own media file on its operations.

And here’s some of the Twitter reaction to the announcement: 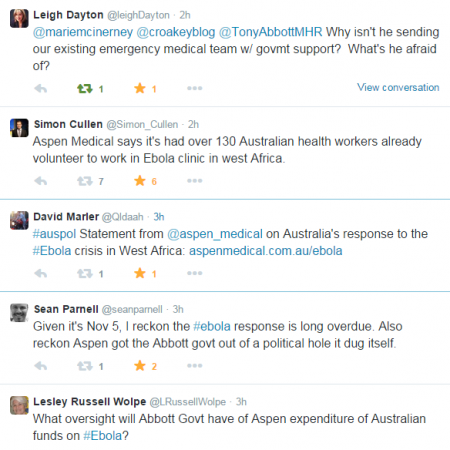