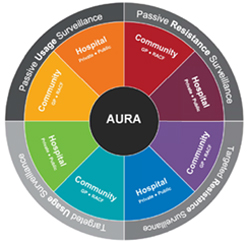 Components of the AURA surveillance system, courtesy Australian Commission on Safety and Quality in Health Care

Last month, the UK-commissioned, Global Review on Antimicrobial Resistance released its final report, and the news was not good. The Review found that antimicrobial-resistant infections are already killing 700 000 people per year worldwide, and could kill 10 million people per year by 2050.

The authors called for 10 measures to be rolled out globally: a public awareness campaign; improved hygiene to prevent the spread of infection; reduction of unnecessary use of antimicrobials in agriculture; improved surveillance of drug resistance and antimicrobial consumption; promotion of rapid diagnostics to cut unnecessary antibiotic use; promotion and development of vaccines and alternatives; increased support for the infectious diseases workforce; funding of early-stage and non-commercial research; incentives for the development and improvement of antimicrobials; and the establishment of a global coalition for action on this problem.

In 2013, The Federal Government funded the Australian Commission on Safety and Quality in Health Care to undertake the ongoing task of monitoring Australia’s use of antimicrobials and the problem of resistance, in the form of the Antimicrobial Use and Resistance in Australia (AURA) project.

AURA’s first report is released today and, as the Commission’s Senior Medical Advisor for AURA, Professor John Turnidge, writes below, it contains important messages for both health care providers and consumers on what actions we can take now to limit the increase in antimicrobial resistance in Australia.

The Australian Commission on Safety and Quality in Health Care has released a landmark report outlining the most comprehensive picture of antimicrobial resistance, antimicrobial use and appropriateness of prescribing in Australia to date.

Resistance to antibiotics is commonly found in Australian hospitals and increasingly in the community. The prevalence of multidrug-resistant bacterial pathogens is rising. In 2014, nearly half the people in Australia were prescribed antimicrobials; the threat of antimicrobial resistance has the potential to affect every individual.

As a critical component of the Australian Government’s Antimicrobial Resistance Strategy (2015-19), the Commission is advancing the AURA Surveillance System. AURA data and reports will allow trends to be monitored over time and inform action to prevent the spread of antimicrobial resistance.

AURA 2016 reported on a number of issues with antimicrobial use, some key points:

The AURA project is extremely important to ensure that safe and effective antibiotics relied on today are protected and available in the future. The Commission’s AURA Surveillance System helps identify critical antimicrobial resistances early and ensure swift and effective action is taken to prevent increasing resistance in Australia.

It is important that people talk to their healthcare providers about the signs and symptoms of illness, so both have the information necessary to make the best decisions about treatment options – including whether antibiotics will have any affect.

People who are prescribed an antimicrobial, especially an antibiotic, should be careful to follow the instructions on how to take the antimicrobial and how long to take it for.

No-one should take unused antimicrobials from a previous prescription at a later date, or give them to others to use – this can put people at risk of compromised health.

Everyone should take steps to prevent the spread of infection by washing their hands thoroughly with soap and running water, or rubbing them with an alcohol-based hand rub, particularly after using the toilet and before eating or preparing food.

Hand hygiene is especially important for people who are sick to help prevent the infection persisting or becoming worse and to prevent it from spreading to others.

Professor John Turnidge is an Infectious Disease Physician and Microbiologist, and a Senior Medical Advisor for the Australian Commission on Safety and Quality in Health Care.

For further information on antimicrobial use and resistance and the AURA Surveillance System, including consumer resources, visit: www.safetyandquality.gov.au/antimicrobial-use-and-resistance-in-australia/resources-page