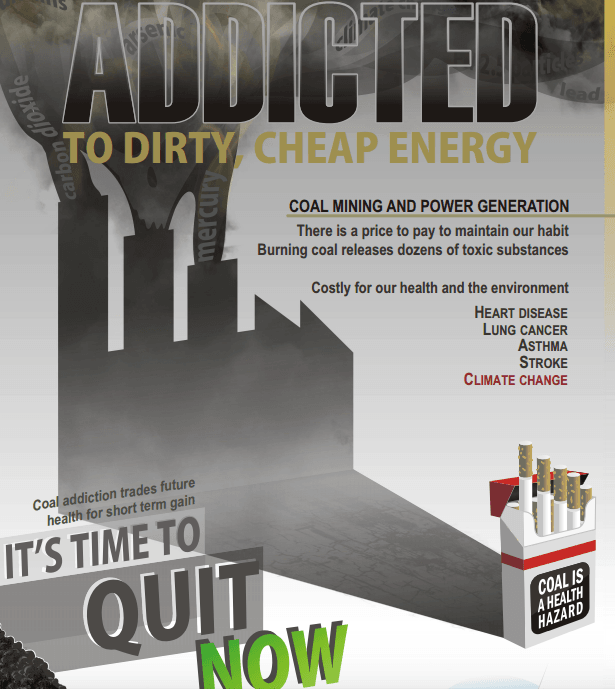 Poster published by Doctors for the Environment Australia

Australia’s climate bomb: the senselessness of Adani’s Carmichael coal mine

Nationals Leader Barnaby Joyce last week championed, all but to the death, the proposed Adani Carmichael coal mine in Queensland, that will need a $1 billion concessional loan from the Australian government to proceed, declaring: “if you live with the butterflies, you will die with the butterflies”.

In fact public health is core to opposition to the mine, as Doctors for the Environment Australia say in this call to action for other health professionals to speak out against the proposed mine.

In the article below, published at The Conversation and republished here with permission, David Holmes, Senior Lecturer in Communications and Media Studies at Monash University, says we are approaching crunch time on the proposal.

Writing that coal won’t ‘just be the next tobacco’, he provides his list of ‘the ten most-absurd things about the Adani mine’.

Veteran environmental campaigner and former Greens senator Bob Brown has previously pointed to Adani’s proposed Carmichael coal mine as the new Franklin River of environmental protest in Australia. Yet the future of this “climate bomb” hangs in the balance.

The ongoing contest over the mine’s approval is about to get very heated. Some of the final decisions are to be made very soon.

On Wednesday, Prime Minister Malcolm Turnbull declared that native title claims would not impede the approval process, and that Adani would press ahead with its plans to seek A$1 billion in funding for the rail line needed to transport coal to Abbot Point for export.

The consequences of going ahead with the mine are almost incalculable. This is not simply because of the emissions it will produce, but from the fact it promotes and normalises the insanity that coal can still be “good for humanity”.

Here’s my list of the ten most-absurd things about the Adani mine.

1) As the largest coal mine in the Australia when completed, Adani will legitimise the idea of mining all of the coal in the Galilee Basin. If extracted and burnt, this will get the world one-third of the way toward 2℃ of global warming.

The Adani mine alone will see up to 2.3 billion tonnes of coal extracted from an area five times the size of Sydney Harbour over 60 years. This is equivalent to putting out 7.7 billion tonnes of greenhouse gases. The global budget is now less than 500 billion tonnes in order to have an 80% chance of keeping global average temperature rise to less than 2℃.

2) The mine lies adjacent to the Great Barrier Reef. The heaviest risk to the reef’s future is a continued increase in greenhouse gases.

You couldn’t invent a greater insult to the beloved reef than begin mining operations that amount to an affront to those who have begun to mourn for its imminent death.

3) After years of bashing renewables as unviable without government subsidy, contemplating a $1 billion subsidy to the mine by the Turnbull government is quite perverse.

Fossil-fuel companies already receive $2,000 in rebates and subsidies for every $1 they donate to Australia’s major political parties. So, this additional subsidy makes a mockery of any serious attempt to tackle climate change.

4) With climate-change-induced extreme weather events exacting billions of dollars of damage across Australia, and especially in Queensland, the idea that public money would be used to increase these damage bills by injecting even more energy into the world’s climate system by accelerating greenhouse gas emissions is absurd.

Cyclone Debbie – a category-four cyclone – actually impacted on the areas of the mine itself, and delivered more peak rainfall than Cyclone Yasi, which was a category-five cyclone only six years ago. Since 2006, insurers have paid more than $6.8 billion in cyclone- and flood-related claims in Queensland alone. Debbie is expected to add another $1 billion.

5) That the Northern Australia Infrastructure Fund could be used to subsidise the mine is in contempt of any claim to responsible climate – and financial – policy. That such a fund could be so directly controlled by so few people and have such enormous impact on greenhouse concentrations is a travesty.

6) The argument that the royalties from the mine would benefit Australia are not supported by the recent revelations that Adani has set up an elaborate network of subsidiaries and trusts which are ultimately owned and controlled from the tax haven of the Cayman Islands.

7) That the Queensland Labor government could buy into a jobs campaign around the mine when renewable technologies can carry the promise of even more jobs, and without risk to the Great Barrier Reef that is threatened by the dredging associated with the mine, and therefore is a danger to the tourism industry, is outrageous.

Adani’s own consultants have suggested the mine would produce fewer than 1,500 full-time jobs. This amounts to a public subsidy of $683,000 per job.

8) Adani’s argument that somehow the mine will be lifting Indians out of poverty is a PR disguise for a company that has been accused of blatant human rights abuses.

This argument, invented by the now-failed Peabody Energy and most famously popularised by Bjorn Lomborg, has also been a favourite of Coalition MPs. This argument is thoroughly patronising – not simply because India itself has declared renewables to be more important than coal, but because it is the oppressive legacy of colonialism that under-developed third-world countries in the first place.

9) The desperate plea by Resources Minister Matt Canavan, mounted in the face of a greater lunacy, that the coal Adani would export is “clean coal” that would actually cut emissions, has been dismissed by analysts at the International Energy Agency.

10) To commit to a mine that it supposed to run for 60 years as the price of coal continues to be devalued in the face of investment moving to renewables is business suicide.

It does not even take account of what the world’s climate will be like in 35 years. With the equator in a permanent heatwave and so much more storm-feeding energy in the system, coal won’t just be the new tobacco. It will become the grim reaper we see in our rear-view mirror.

With thanks to Tahnee Burgess for research assistance on this article.

David Holmes is a political analyst, social theorist and media scholar. He completed a major in Media Studies at Swinburne University, a BA (Hons) in Politics and Social Theory and a PhD in Social Theory (Department of the History and Philosophy of Science) from the University of Melbourne, where he was awarded the Dwight prize for political science.

He is author or editor of four books in the sociology of communications including: Virtual Politics: Identity and Community in Cyberspace (Sage 1997) and Virtual Globalisation: Virtual Spaces, Tourist Spaces (Routledge 2001), Communication Theory: Media, Technology and Society (Sage 2005) and a Key Concepts in Media and Communications (Sage 2011) co-authored with Paul Jones (UNSW) Over eleven years, he has also co-authored four editions of an analysis of Australian society: Australian sociology (2003, 2007 and 2011, 2014) with Roberta Julian and Katie Hughes. For the last two editions he has written a new chapter on the sociology of climate change.