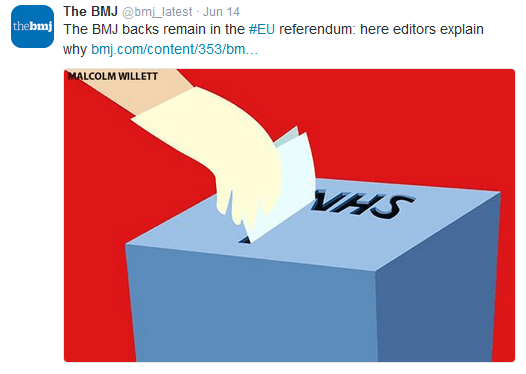 “Brexit should come with a health warning for the NHS, public health and research.”

The decision by the United Kingdom in today’s referedum to exit the European Union is likely to have major health implications.

In the lead up to the poll,  the British Medical Journal published a series of articles on the referendum, saying the #Brexit issue “transcends politics and has such huge ramifications for health and society”.

Justifying its intervention in the debate and conclusion that the UK should remain in the EU, the BMJ said “a slew of health experts” had also come out on the ‘remain side’, including Simon Stevens, chief executive of NHS England, while “not one prominent national medical, research, or health organisation” had sided with Brexit. See the reasons for its position.

Among those supporting the ‘remain’ vote was Conservative MP and doctor Sarah Wollaston, who changed her earlier support for a ‘leave’ vote, outlining her reasons why in this article, headed: Brexit should come with a health warning for the NHS, public health, and research.

This followed the launch of the Vote Leave group’s Save Our NHS campaign in April, which  warned of the growing control and influence the EU would have over the NHS if the country voted to remain with Europe.

Accusing the ‘leave’ side of cynical manipulation of data about the NHS, Wollaston said:

My answer to the rising tide of hostile questions on the effect of migration on the NHS is that these valued health and care workers are far more likely to be caring for you than ahead of you in the queue.

She said there was “near universal consensus” that Brexit would be damaging for research and international cooperation, including its ability to respond to infectious diseases.

Earlier this month, 60 eminent doctors, including former presidents and chairs of medical royal colleges and the British Medical Association, wrote an open letter to The Times, also rejecting claims from the ‘leave’ camp that EU membership would ruin the NHS and predicting that leaving the EU would lead to a decline in income for UK citizens, produce severe staff shortages for the NHS, and hurt UK medical research. They said:

Rather than ruining the NHS, as some have claimed, immigrants play a large part in running it. Without the 10 per cent of doctors and 5 per cent of nurses who come from other EU countries, not to mention even larger numbers of care workers, the NHS would face severe staff shortages.

Moreover, far from being strangled by bureaucratic regulations, we have benefited from Europe-wide action on matters such as new infectious diseases (including the zika virus), environmental pollution, climate change, and antibiotic resistance — all of which are public health threats that do not stop at the Channel.

We benefit from rapid access to new medicines because of the European Medicines Agency, based in this country. In addition, about 20 per cent of our medical research is now funded by the EU; we receive considerably more back from the EU for this than we pay in. If we leave we can expect to lose a good proportion of this to other EU countries.

Finally, rather than the discredited £350 million a week that Leave campaigners say would be redirected to the NHS, it seems far more likely that there would be an immediate large decline in national income, which can only worsen the existing financial crisis that faces the NHS.

It is Brexit that is the threat to the NHS, not our membership of the EU.

Gutted by #Brexit win. We must do all we can to unite our divided country & stop further austerity, which will damage the lives of so many

In other reactions, the international weekly science journal Nature said it was the result that most scientists didn’t want. In this article, it said:

The United Kingdom’s vote to leave the European Union has plunged it into political and economic uncertainty — and left researchers worried over the future of their funding and collaborations, the UK’s participation in major European research programmes, and the freedom of movement and employment status of thousands of scientists. 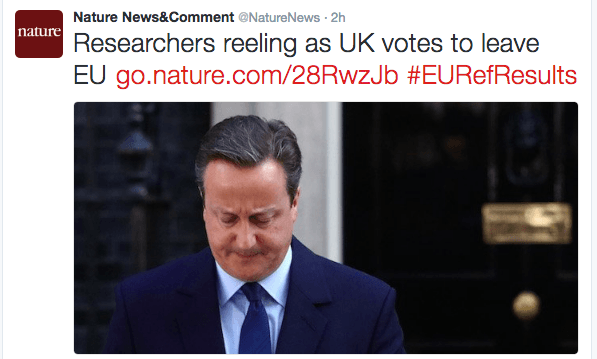