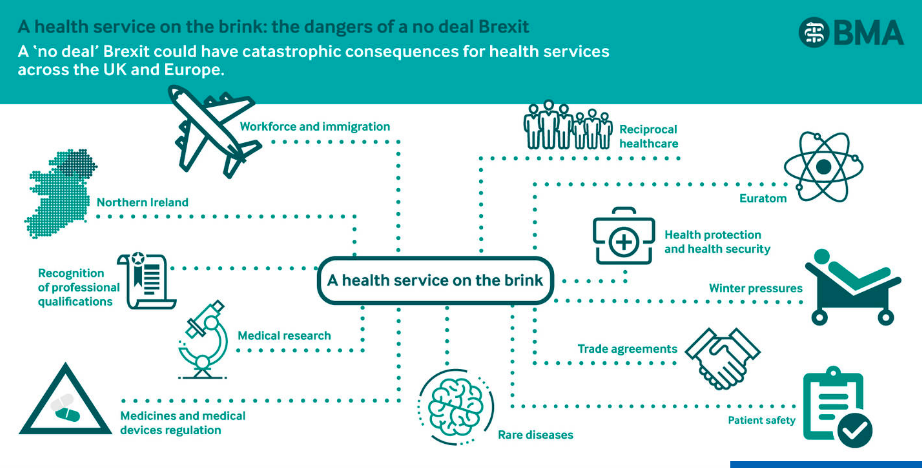 From the British Medical Association policy paper: A health service on the brink: the dangers of a no deal Brexit

British politics was in turmoil this week, after MPs, including Tory rebels, voted against Prime Minister Boris Johnson’s demand for an early general election and in  favour of a bill blocking a no-deal Brexit.

It is unclear yet what will happen in the coming days or weeks but British health leaders have been stepping up their warnings that Johnson’s plan to crash out of the European Union with no Brexit deal will “irreparably harm” the National Health Service (NHS) and the nation’s health.

The British Medical Association this week warned in a new policy paper that a no-deal Brexit will have “catastrophic consequences” for patients, the health workforce and health services at a time when the NHS is already struggling to cope with rising demand and on the cusp of winter.

Among dozens of questions it puts to the UK Government on how a no-deal Brexit could affect health and health care, it asks:

“The BMA is in no doubt that Brexit, and a ‘no-deal’ Brexit specifically, will irreparably harm the NHS and the nation’s health,” BMA council chair Chaand Nagpaul said in a statement.

The warning came as consultant neurologist Dr David Nicholl, who had been involved in emergency planning for a no-deal Brexit, claimed the government is stockpiling bodybags to deal with the risk of an increased mortality rate in a no-deal Brexit. (Such reports also emerged earlier this year). Nicholl has written of his concerns here.

The BMA was one of a dozen health unions and health bodies that last week issued a joint statement saying that leaving the EU without an agreed deal could have fatal consequences for patients owing to shortages and delays in the supply of medicines.

The groups, which include the Royal College of Nursing and Royal College of Midwives, say a no-deal Brexit could lead to vital medical shortages, including life-saving agents for cancer diagnosis and therapy that cannot be stockpiled, and could also intensify the NHS’ staffing crisis.

They warned that health and social care budgets across the country are already under immense pressure after a decade of austerity.

“With waiting times rising, operations being cancelled and yet another winter crisis looming, the health service cannot weather a long-term economic shock.”

The BMA, which last month voted to declare that climate change has created a “climate emergency”, said the NHS across the UK is now caught in a cycle of deteriorating performance, where increasingly pressurised winters lead to unprecedentedly difficult summers, leading to a vicious cycle.

Over nine in every ten (92%) respondents to the BMA’s quarterly survey highlighted this normalisation of NHS pressures, reporting that ‘The NHS is now in a state of year-round crisis’.”

Adding to the no-deal Brexit warnings this week were leading UK health think tanks, the Nuffield Trust, King’s Fund and Health Foundation, which wrote a joint letter to British MPs outlining the major potential impacts on health and social care.

They say their own and other objective evidence is that a no-deal Brexit could cause significant harm to these services and the people who rely on them, also pointing to  four major areas where the impact could be felt most sharply:

There is a very real risk that leaving the EU without an agreement could exacerbate the workforce crisis in health and care, drive up demand for already hard-pressed services, hinder the supply of medicines and other vital supplies, and stretch the public finances which pay for health care.”

The letter says that despite plans for stockpiling and creating new supply routes, the large amount of new paperwork and regulatory hurdles that a no-deal Brexit would create for imports is likely to increase shortages of medicines and medical devices and may cost an additional £2.3 billion per year across the UK.

It warns that a no-deal Brexit will also mean up to 200,000 UK emigrants to the EU may have  to return to the UK to live and receive treatment if they become ill, because they will lose access to EU health care rights guarantees for retirees abroad.

The think tanks also outline serious workforce shortages in the NHS. They say there are nearly 100,000 vacancies in English NHS trusts and a further 110,000 in social care, and reliance on 116,000 EU nationals working in health care and 104,000 in social care.

“Even a small trend towards European migrants leaving the United Kingdom due to a fall in the pound or uncertainty around being granted settled status will worsen this situation,” they said.

The BMA says that EU applications to UK medical schools have fallen to their lowest point in a decade, “suggesting Brexit is deterring prospective doctors from studying in the UK”

It cites a dramatic decline in other fields, saying Nursing and Midwifery Council figures show that the number of EU nursing and midwifery professionals joining the register declined from 9,389 in 2016 to 968 in 2019.

Health is ‘central to Brexit’

A group of prominent public health academics sought to look at broader health implications in a paper, published in the BMJ last week.

These included access to food, law and order, and trade policy, which they say is “another increasingly recognised determinant of health—for example, where trade agreements limit scope to respond to threats to health”.

The authors include Martin McKee, a professor of European public health at the London School of Hygiene and Tropical Medicine (LSHTM), Tim Lang, a professor of food policy and consultant to the World Health Organization, and Maggie Rae, the president of the Faculty of Public Health.

They give as an example where a desperate UK may feel compelled to sign a deal with the US and make considerable concessions to do so.

“This could have serious consequences for dietary quality, food safety standards, animal welfare commitments, and the UK’s ability to adopt public health policies such as warning labels, which the US views as non-tariff barriers to trade,” they say.

They say health is central to Brexit, with the Leave campaign having claimed that Brexit would provide £350m a week for the NHS and Johnson recently announcing “what he misleadingly described as ‘new’ spending on the NHS”.

“Thus, many people may think that a no deal Brexit will do no harm and could even be good for health and the NHS,” they say.

But they say these hopes compare starkly with previous analyses that have set out, in detail, detailing why any form of Brexit will be damaging, and the leaked Operation Yellowhammer document that paints an even more alarming picture (see this paywalled article).

They say the picture of post-Brexit is complex, amid predictions it will prompt an economic crisis. For example, it says that deaths from road traffic injury often fall in such crises because of reductions in road freight.

But other causes of death would be expected to increase, although much would depend on what policy responses are adopted, they write.

Likely consequences include rises in suicides, alcohol related deaths, and some communicable diseases, such as tuberculosis and HIV, especially among vulnerable groups. Response will be more difficult because of disruption of collaboration with the European Centre for Disease Prevention and Control.”

The article also criticises the government’s secretive approach on post-Brexit health, saying at least 26 non-disclosure agreements have been imposed on advisers.

Co-authors Rae and McKee were also among the signatories of a letter signed by 29 leading health organisations published on Wednesday that expressed concern over the threat of a no-deal Brexit “exacerbating the devastating consequences of health inequalities”.

They challenge the government to publish “all assessments it has undertaken of the impact of different Brexit scenarios on health” and called for it establish a system for monitoring any impacts on health from Brexit.

We have sought to mitigate the very real risk of Brexit exacerbating the devastating consequences of health inequalities, and are concerned about the impact that a no-deal Brexit would have on the public health of all four nations of the United Kingdom, including placing at risk the Good Friday agreement and the peace and stability it has brought to Ireland.

Brexit is proceeding at a time when the long-term improvement in life expectancy has slowed and, for some age groups, gone into reverse, while the most vulnerable in our population face growing insecurity of income, employment and even food.

We believe that all of these would be exacerbated by a no-deal Brexit.”