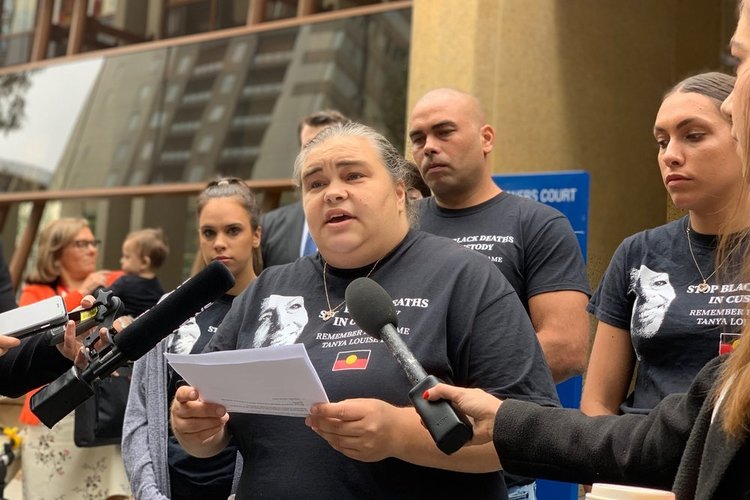 The organisations have signed a letter (read it in full below) from the family of Yorta Yorta woman, Tanya Day, who was taken off a train in regional Castlemaine in December 2017 and locked up for public drunkenness. She fell and hit her head in the police cell and later died from a brain haemorrhage.

The Human Rights Law Centre (HRLC), which is representing Day’s family in the coronial inquest into her death, said that over the past three decades, in addition to the Royal Commission, numerous expert reports have recommended that the offence of public drunkenness be abolished and replaced with a community health response.

Victoria and Queensland are the only two states that have failed to repeal the offence, it said in a statement.

The HRLC said that the Coroner has foreshadowed she will recommend the repeal of the offence, but the Andrews Labor Government is yet to commit to getting rid of the law.

“Today is the 28th anniversary of the Royal Commission into Aboriginal Deaths in Custody.

Our Mum –Tanya Louise Day –would still be here with us if the Victorian Government had implemented the Royal Commission’s recommendations and abolished the offence of public drunkenness.

Mum was a proud Yorta Yorta woman who was greatly respected within the Aboriginal community. She was a loving mother, grandmother, sister and aunty to many.

In December 2017 our mum died from a brain haemorrhage caused by a traumatic head injury she sustained while in police custody.

Mum was travelling on a VLine train from Echuca to Melbourne when she fell asleep. She was approached by a conductor who deemed her ‘unruly’ and called the police. She was then taken off the train and placed in a Castlemaine police cell for being drunk in a public place.

Abolishing the offence of public drunkenness was a key recommendation of the Royal Commission.To date, Victoria is one of only two states that have failed to act.

Section 13 of the Summary Offences Act still provides that ‘any person found drunk in a public place shall be guilty of an offence’.

Mum was 55 years old when she died. She was taken from her children and grandchildren as a direct result of this recommendation not being implemented.

She had so much more life to give, and so many more hearts to touch.If there are concerns that somebody is too intoxicated, the appropriate steps should be taken. That person should be cared for at home or at a medical service.

If there are concerns about their wellbeing, an ambulance should be called. Drunkenness requires a public health response, not a criminal one.

The organisations listed below support us and call on the current Victorian Government to act when past governments have failed to: repeal the offence of public drunkenness.

It’s time to put an end to racially discriminatory laws and policies that result in Aboriginal people, like our mum, dying in police custody. Our mum was not treated with respect, she was not afforded dignity and there was no compassion in how she was treated –the simple fact is, this is because she was an Aboriginal woman.

Please let our family be the last to endure the pain, suffering and heartache of losing a loved one in these circumstances. The time for change is now.

“Djirra works daily with Aboriginal women who experience multiple forms of system violence just like Tanya Day did. It’s shameful that 28 years on from the Royal Commission into Aboriginal Deaths in Custody, the public drunkenness law still has not been repealed by the Victorian Government.”

“Our people must be safe, especially culturally safe. When we are not this is the worst outcome, people die. Drunkenness is a public health issue, not a criminal one. The Royal Commission into Aboriginal Death in Custody was handed down in 1991 and made 365 recommendations. Recommendations 79 and 80 concerning public drunkenness are yet to be implemented by Victoria and Queensland. As long as public drunkenness remains an offence the lives of our people and the rest of Victorians are at risk.”

“Premier Andrews must respect the calls of Tanya Day’s family and act on the Royal Commission’s recommendations. He must not let this offence take any more lives, like Tanya Day’s. The offence of public drunkenness is too often used to target Aboriginal and Torres Strait Islander people and must be abolished.”

“To stop people dying in custody, governments need to change the law. Premier Andrews should show his mettle and act today by repealing the offence of public drunkenness. If somebody is too drunk, they need help to get home or for an ambulance to be called – they should not be behind bars.”

For more information, you can listen to today’s Radio National interview with Belinda Stevens and Ruth Barson here