Home Global health and climate change Call to action: “The culture of using antibiotics as placebo must stop” 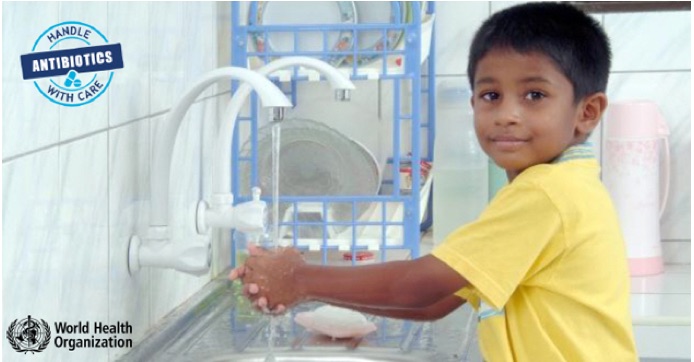 Call to action: “The culture of using antibiotics as placebo must stop”

Alarm bells about antibiotic resistance have been ringing for so many years that it seems quite remarkable it has taken until 2015 for there to be the first World Antibiotic Awareness Week.

Nonetheless, this WHO initiative provides an opportunity for highlighting the local, national and global actions that are needed in the face of such a massive public health threat.

Antibiotic resistance is “a global issue that is everyone’s problem”, and a reminder that “investment in the health of our neighbours has domestic returns”, according to Dr Paul Mason, from the Woolcock Institute of Medical Research, and Dr David Griffin, a medical registrar.

How could we combat bacterial diseases in a world where antibiotics had been rendered ineffective? Antibiotic Awareness Week is a time to ponder such questions.

This year, Australia hosted two major international conferences on infectious diseases. A major topic on everyone’s minds was “antibiotic resistance”; the ability of a bacterium to overcome the activity of an antibiotic.

Drug resistant microbes are a major threat to global health. A rise in untreatable common diseases could see medicine thrust back into the pre-antibiotic era of the early twentieth century.

At both the tuberculosis conference in Sydney and the sexually transmitted infections conference in Brisbane, the central message was clear: The increase of antibiotic resistant microbes demands a radical transformation in the approach to patient care, disease control, and drug development.

Indeed, a radical shift in the reliance on antibiotic use in infection control needs to occur in healthcare, the community and agriculture, if we are to avoid the impending “antibiotic apocalypse”.

The development of safe, effective antibiotics from the 1930s revolutionised medicine. The first widely commercialised antibiotics were developed to combat syphilis, which was endemic and responsible for significant illness, disfigurement, and death at the time. Penicillin followed shortly thereafter, along with a number of other antibiotic classes.

These drugs facilitated reductions in illness and death from a variety of common diseases; minimised maternal and foetal mortality; decreased infections associated with surgery, enabling safer and more complicated procedures; supported the growth of intensive care units; and reduced the mortality associated with infection in immunocompromised patients, permitting organ transplantation.

The success of antibiotics has modified the public perception of infectious diseases, with antibiotics viewed as an elixir for any febrile illness.

We have come to depend on antibiotics, and the benefits they afford us. Antibiotics are now widely used in agriculture, to improve animal growth and productivity.

However, reckless use of antimicrobial agents in medicine and agriculture has presented bacteria with ample opportunity to develop resistance. We have seen the emergence of multi-, extensively-, and even totally drug-resistant organisms, each becoming more difficult to treat.

The inability to treat common infections with antibiotics will lead to higher morbidity and mortality due to infectious diseases, something not seen since the early-mid twentieth century. Here, only invasive techniques such as surgical debridement or amputation will remain possible treatment. However, such procedures will be inherently more dangerous without antibiotics.

Many are warning of a return to the pre-antibiotic era, with devastating economic and public health consequences. Only then, may the real value of antibiotics, until now taken for granted, become apparent.

Preventing resistance to existing antibiotics is a pressing issue, particularly in the Asia Pacific. This region accounts for 58 per cent of global multidrug-resistant tuberculosis cases and is home to the emergence of antibiotic resistant strains of Neisseria gonorrhoeae (Gonorrhoea), Treponema pallidum (Syphilis) and Mycoplasma genitalium.

Drug resistance is no longer a niche medical concern. Drug resistant disease in some parts of the world is reaching epidemic levels. In Papua New Guinea, for example, multidrug resistant tuberculosis is set to become the dominant form of the disease within the next decade; a terrifying prospect given its intersection with a growing HIV/AIDS epidemic.

Historically, gonorrhoea could be treated with simple penicillins. However, in recent years it has become increasingly resistant to available drugs, leaving ceftriaxone as one of the last remaining antibiotic treatments. Meanwhile, the number of cases of gonorrhoea in Australia continues to increase with some 15,786 notifications in 2014.

A multinational approach to combating the rise of drug resistance is in Australia’s best interests. Infectious diseases are intrinsically transnational in character because they spread through social contact and do not observe national borders. With ever-increasing global travel, antibiotic resistant organisms can be transported vast distances around the world, often in asymptomatic individuals.

Addressing the problems of infectious disease in neighbouring countries has proven to be a cost-effective method for reducing the incidence at home. While the Australian government focuses funds on stopping people immigrating to our shores, drug resistant bacteria pass through customs undetected and unannounced.

Infectious diseases are a potent reminder that investment in the health of our neighbours has domestic returns. The threat that antibiotic resistance poses to national biosecurity calls for reinvestment in global health.

Over the years, the rise of drug resistance has led to a lot of finger-pointing, but the problem is ultimately multifactorial. Doctors, for instance, have blamed patients who were noncompliant with lengthy and complicated treatment regimens. However, standardised treatment programs administered without adequate drug susceptibility testing have also been at fault. Treating a drug resistant infection with inappropriate antibiotics facilitates the selection of resistance in neighbouring bacteria. The replacement of drug susceptible infections by drug resistant infections is a scenario no one desires.

In tuberculosis diagnostics, a fully automated rapid nucleic acid amplification test called Xpert MTB/RIF has reduced the time taken to detect Mycobacterium tuberculosis, and associated drug resistance, from 2 weeks to 2 hours. This means that patients are more accurately and rapidly put onto the correct medication. To improve patient outcomes, molecular testing needs to become commonplace for all infectious diseases.

Strategies to curb the rise of drug resistance cannot rely on technological innovations alone. Programmatic interventions and cultural changes are also required. The commonplace practice of overprescribing antibiotics for viral and other non-microbial conditions amounts to nothing more than a placebo.

The culture of using of antibiotics as a placebo must stop.

The widespread use of antibiotics in livestock must also be seriously reassessed and its effect upon human pathogens more closely monitored. The current culture of antibiotic use for short-term gains has severe, long-term consequences. A more forward-looking strategy is required.

For those contacts diagnosed with a latent infection, a clinical trial is set to investigate if an antibiotic can be used to prevent infected contacts from developing drug resistant tuberculosis. In some ways, the approach is reminiscent of the surveillance-containment models that have proven a culturally-sensitive method of eliminating smallpox and controlling polio in diverse cultural settings.

Dr Fox’s trial is still in its early stages but should it prove effective and cost-efficient, it will be a trail-blazing approach to stopping the rise of drug resistant tuberculosis.

This antibiotic awareness week, we highlight antibiotic resistance as a global issue that is everyone’s problem. Stopping the emergence and transmission of drug resistant infectious disease will help protect the power of antibiotics for us all.

All countries need to take action. Achievements in any one country will benefit other countries. At the clinical level, we need to ensure the use of the right antibiotic, at the right time, at the right dose, for the right duration. We need innovative diagnostics to detect antibiotic resistance, and enable early, targeted antibiotic therapy; sound guidelines for doctors to follow; and coordinated local and international resistance surveillance programs.

Preventing the spread of drug resistant infectious microbes could be considered a priority, along with the development of novel agents. If we do not develop adequate measures of effectively using the antibiotics we have, then resistance to future drugs is likely to occur.

• Dr Paul H. Mason is a medical anthropologist and Post-doctoral Research Fellow at the Woolcock Institute of Medical Research.
On Twitter: @sociocerebral

• Dr David Griffin is a medical registrar, with a keen interest in infectious diseases, public health and infection prevention in healthcare.”
On Twitter: @drdavidwjg

• The feature image was sourced from the WHO here.