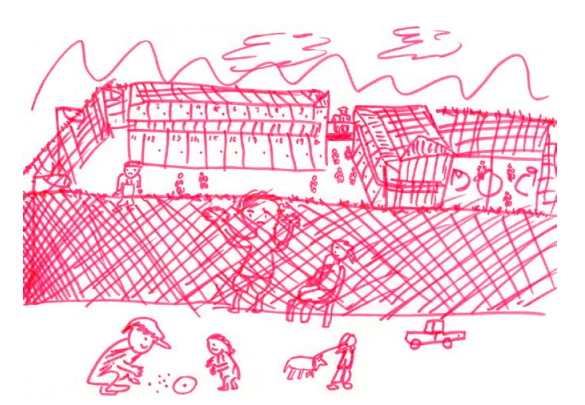 2014 drawing of a Darwin detention centre, from The Forgotten Children report by the Australian Human Rights Commission

Infectious disease specialists have called on the Australian Government to consider the release of around 1,400 asylum seekers and other “non-citizens” being held in detention in crowded conditions that would preclude adequate protection against COVID-19.

The call follows the publication of an open letter from more than 370 legal experts calling on Australian governments to reduce the risk of transmission of COVID-19 in the criminal justice system, especially prisons and youth detention centres.

The Australasian Society for Infectious Diseases (ASID) and the Australian College of Infection Prevention and Control (ACIPC) have published a joint statement, warning of the risk to the health of both staff and detainees in immigration detention facilities, and then beyond to the broader Australian community.

We understand that around 1400 asylum seekers and other non-citizens are being held in detention in crowded conditions that would preclude adequate social distancing or self-isolation.

This would potentially pose a risk to their health in the event of an outbreak of COVID-19, as outbreaks in other crowded settings, including detention facilities, have been well documented to date.

This would also potentially pose a risk to staff who work at immigration detention facilities and, through the amplification of infection, the broader Australian community.

We urge the Commonwealth government to consider the release of detainees into suitable housing in the community if they do not pose a significant security or health risk.”

If not released, then as a minimum standard ASID and ACIPIC say detainees should be held in single rooms with their own bathroom facilities.

“While this would not fully address the risk associated with COVID-19, and it certainly would not be as effective as reducing the overall numbers in immigration detention facilities, it would go some way to reducing the risk and could be considered the absolute minimum necessary step,” they said.

Human Rights for All, a law firm dedicated to refugee issues, has also launched a petition urging the government to act against the risk of COVID19 spreading in detention centres, after an immigration guard, working at a Brisbane hotel that is used by the Australian Border Force to house refugees, tested positive for the disease.

It says there is a simple solution to this emerging and potentially life-threatening situation: send these people to homes in Australia. Those without immediate families have advocates in the community who will support them.

“Politics has no place in dealing with a global pandemic,” it says.