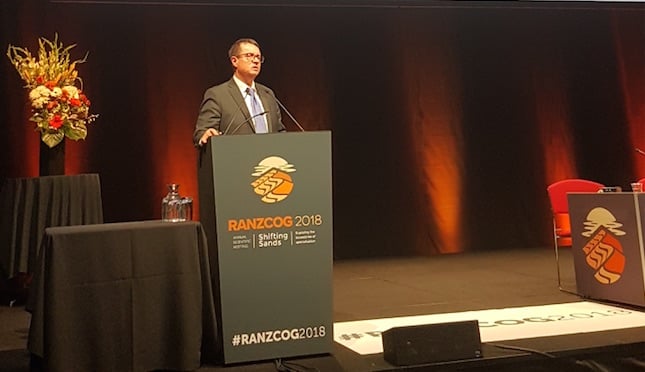 Ten thousand couples across Australia are set to have genetic carrier screening for conditions such as cystic fibrosis, spinal muscular atrophy and fragile X syndrome, as part of a $20 million pilot study.

The study is funded via a $500 million allocation for genomics medicine announced in the May Federal Budget, which was welcomed by medical researchers but has also generated debate about some of the equity and ethical issues involved.

Some of the wide-ranging questions raised by genetic screening were also discussed at the Royal Australian and New Zealand College of Obstetricians and Gynaecologists (RANZCOG) conference in Adelaide recently, as Amy Coopes reports below for the Croakey Conference News Service.

In an era where it’s possible to distil our makeup down to its most fundamental building blocks, offering a glimpse not only of who we are but what we have the potential to become, how prepared are we for the answers and their implications?

This was the essence of a thought-provoking talk to women’s health specialists at their recent annual summit in Adelaide, where obstetrician Dr Steve Robson offered an insight into the ambitious Australian Reproductive Carrier Screening Project.

The project – a $20 million pilot study – aims to roll out extended genetic carrier screening for couples intending to start a family, in the hopes of reducing deaths and serious morbidity from heritable causes.

Called “Mackenzie’s Mission”, the project follows advocacy from the parents of Mackenzie Casella, who died aged seven months from spinal muscular atrophy, an inherited condition of which both her parents were unaware they were carriers. An estimated one million Australians are directly or indirectly affected by genetic disorders.

Presently in the preliminary phases, the project will initially examine a panel of about 500 genes across 10,000 couples, looking to refine a potential list for use in population-wide screening, Robson told the annual congress of the Royal Australian and New Zealand College of Obstetricians and Gynaecologists (RANZCOG).

As the medical specialty concerned with the conception, gestation and delivery of children, Robson said obstetricians could soon find themselves at the forefront of one of the great bioethical debates of our time: “the fundamental essence of being human”.

It is part of being human that we are imperfect, and we are now on the threshold of an era where it is possible to dissect in minute detail all of the genetic imperfections that each of us carry.

It gives us a choice: if we are going to have a family, do we accept imperfection? At what level do we say this is not an imperfection I want to accept in my children? Should you even be given that knowledge?”

Genetic technology had advanced at such a rate Robson said it had run “far ahead of society’s capability of understanding what it can do”, including the medical professionals who would be tasked with counseling the public on the risks, benefits and implications of screening for potential risks.

Describing technology as the “easy” part of the equation, Robson sounded caution on the enormous, perhaps to some degree inconceivable, psychosocial and ethical dimensions to the project, which he likened to “intelligence designing humans”.

At a fundamental level, there were questions about where you set the bar – which conditions should be included in standardised screening, and on what basis: because it imposed a certain burden of disability; because that disability was intractable or difficult and therefore costly to treat?

“Do we look at it from the point of view of what’s most economical: will taking these diseases out of the gene pool in Australia be an economic plus, will it be an economic minus?” asked Robson.

“Is it right to even look at it in economic terms, or is it something that should be beyond economics and purely be around the morality of illness?”

If the screening panel ultimately included genes for 500 conditions, how much should a prospective couple need to know about each of these to make an informed choice when “most genetic specialists wouldn’t have a clue about most of the conditions on this list or what they do, and in fact even in the sum of all human knowledge these conditions may be so rare that people don’t know a lot about them”?

How could you guarantee that this information was accessible to every person in the population, no matter their level of education or proficiency with English or degree of literacy with the Australian health system, asked Robson.

“One of the big things that frightens me very strongly is the concept of the genetic haves and the genetic have-nots, that the person who is well informed, well-heeled, can afford & knows what the options are will have a completely different family or diversity in their family to the poor person who can’t afford it, or can’t understand it, or doesn’t know how to make a choice or is isn’t helped to make a choice or isn’t made aware of the options,” he said.

How much information should be shared with the couple about the findings and in what format was another thorny question, he said.

Currently, it was being proposed that screening would be offered to couples rather than individuals, and only conditions for which both were found to carry a genetic mutation would be reported back, “partly to simplify things”.

But what would happen to the data, and to the tested material itself? Would it be stored, and if so, where? What protections would there be on other, or future uses? “I think there is enormous concern about, for example, insurance implications, work implications,” he said.

Robson said these were fundamental questions beyond individual doctors or parents to adjudicate, but a discussion that needed to be had “as a community as a whole”.

“The technology’s totally available and it’s becoming affordable and society needs to have this discussion now before it’s frankly taken over by commercial interests, we need to know where we’re going and have a voice as a community,” he said.

Watch from 10mins 30 secs in for the discussion on genomics.

The tweets below are from Amy Coopes tweeting for @WePublicHealth. 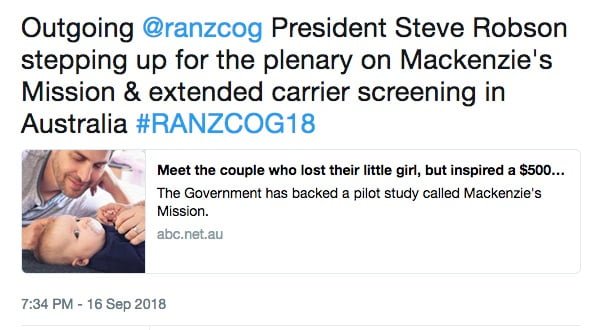 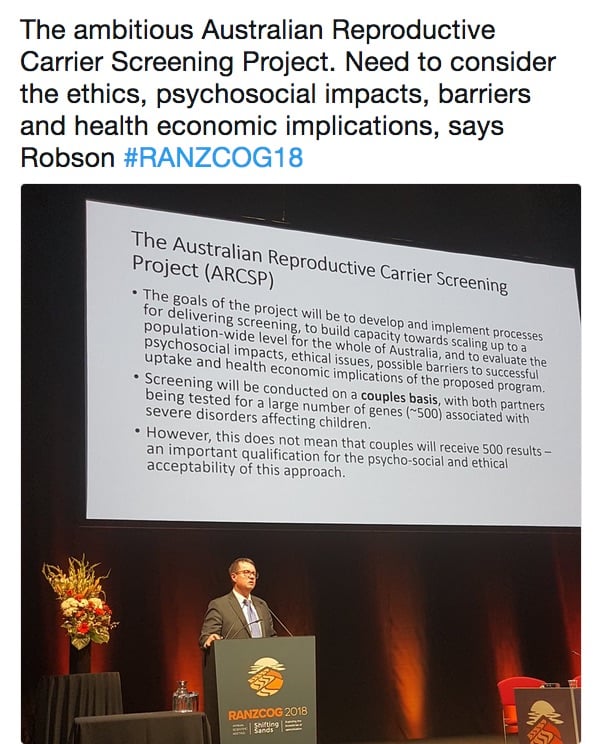 • Bookmark this link to follow reports by Amy Coopes from #ranzcog18 for the Croakey Conference News Service.