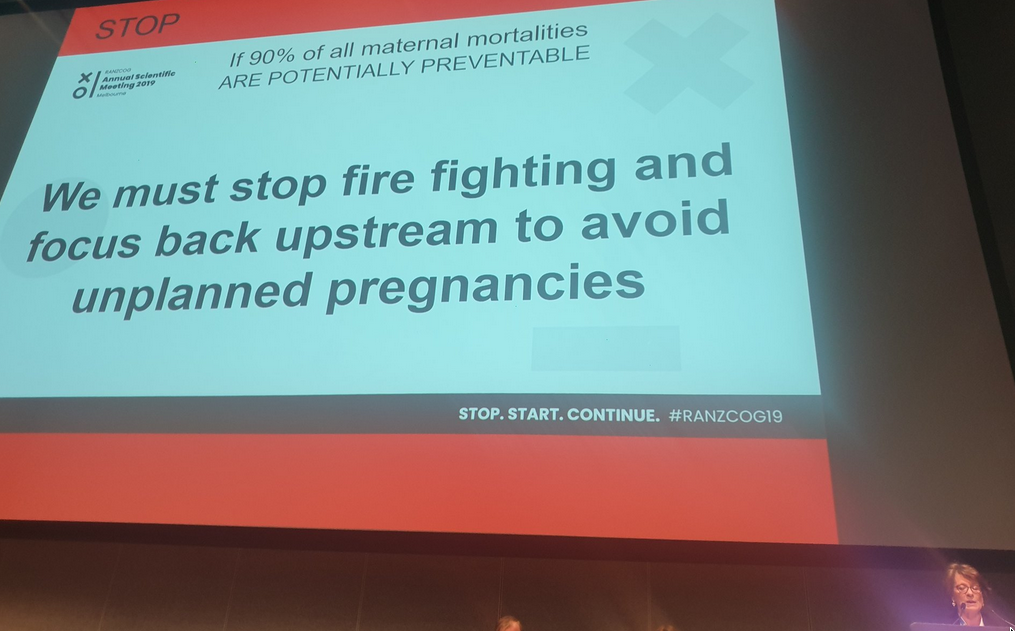 Calling for advocacy and action on inequities in abortion care

Australian women face harmful inequities in access to abortion care, and obstetricians, gynaecologists and their College must do much more to push for change, a major meeting of women’s health specialists has been told.

While there had been welcome progress on abortion care in Australia with the passage of decriminalisation laws in NSW,  there was no room for complacency or self-congratulation, speakers told the annual scientific meeting of the Royal Australian and New Zealand College of Obstetricians and Gynaecologists (RANZCOG) in Melbourne this week.

Drug restrictions, cost, and stigma – especially within the medical profession – are contributing to inequities of access, they said.

The conference was told about so-called ‘conscientious objector’ doctors, who not only refused to provide services but also did their best to stymie those did.

This often took the form of delaying a referral for abortion until 10, 12 or sometimes 20 weeks, according to a doctor from Brisbane who described this practice as “directly harming women”. (The doctor was commenting from the floor in a session and was not identified).

RANZCOG was urged to step up its advocacy in this space and provide greater support for primary care providers, with one of the field’s pre-eminent experts telling the conference that the College was only “a third of the way there”.

It was standing room only at the conference’s sexual and reproductive health session, with delegates forced to sit on the floor and overflow into the corridor as Dr Paddy Moore, from the Royal Women’s Hospital in Melbourne, provided an update on equity of access to abortion both in Australia and abroad. 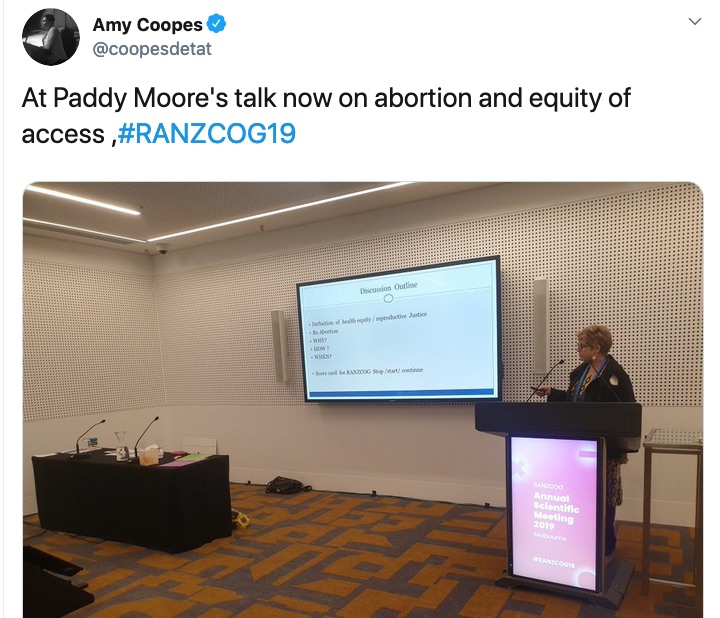 Moore, one of Australia’s leading voices on abortion (and profiled recently in The Sydney Morning Herald), told delegates she had evolved over the years into someone with a ‘conscientious compulsion’ to not only provide abortion care, but to speak about it publicly. She was prominent during the recent NSW decriminalisation debate.

While legislative reform was of course welcome, Moore said it was only part of the puzzle, with legal protection meaning little if people were unable to access abortion services due to geographic or cost barriers.

Instead of reproductive ‘rights’, which she described as being grounded in the law, Moore said she was an advocate for reproductive ‘justice’, which recognised that, when it came to accessing services, it was not a level playing field.

“There is no room for self-congratulation,” Moore said, noting that the average cost of a medical abortion in Australia was $560. “That is not equity of access.”

Describing equity as a “process” that required political will, Moore detailed a blueprint for progress that included greater training for providers and planning for succession and increased services – especially in the public system, rurally and remotely, and for marginalised groups.

“Governments and health boards have to mandate that women’s health services provide abortion and contraception services,” said Moore, also stressing that women must be able to self-refer.

The importance of this was illustrated during a panel discussion at the end of the session, when delegates shared their frustrations at so-called ‘conscientious objector’ colleagues, who often delayed referrals for abortion until 10, 12 or sometimes 20 weeks.

Rather than “chastening” a pregnant woman into changing her mind, Moore said the research showed such tactics only served to waste patients’ time. The best way to get around obstructive colleagues was to allow women to directly self-refer, Moore said.

She urged those in the session to “start the conversation” with objectors in their ranks, saying no viewpoint was fixed, even among the most trenchant opponents.

“I have discovered that if I talk to the junior staff, the medical students, let them hear the women’s stories and talk to them about their conflicted feelings, there is movement,” said Moore.

This was echoed by Professor Lesley Regan, president of the UK’s Royal College of Obstetricians and Gynaecologists, who was in the audience for the session.

Regan shared the success of a US program called the Ryan Fellowship in Family Planning, which requires involved doctors – even those who describe themselves as objectors – to have an observer role in the abortion care process.

After spending time with women seeking an abortion and understanding more about their decisions, Regan said more than 90 percent of objectors – termed ‘partial participants’ by the program – were converted to full participation.

In her earlier keynote, Regan described abortion and contraception as the two ‘elephants in the room’ for maternal mortality globally, and in meaningful progress towards Sustainable Development Goal 5: Achieve gender equality and empower all women and girls (an interview with Regan about this and other issues will be reported in later coverage of #RANZCOG19). 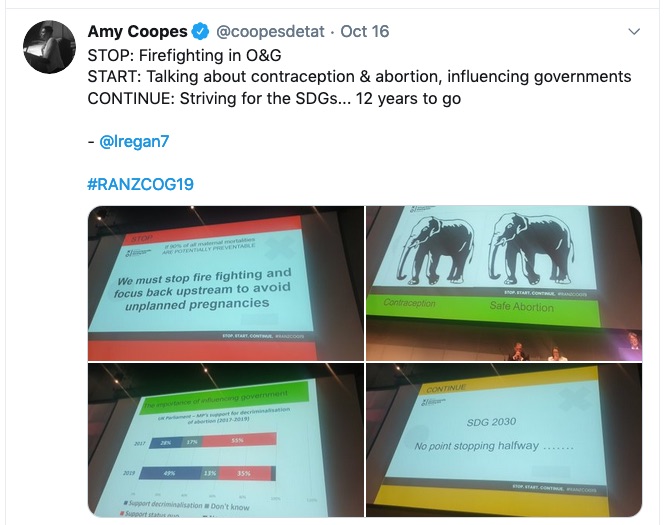 Regan and others stressed the importance of language and using terminology such as ‘anti-choice ‘(not pro-life), ‘conscientious commitment’ as well as objection, and ‘abortion care’ rather than ‘termination of pregnancy’.

RANZCOG ought to have a leading role in these discussions, according to Moore and de Costa.

Moore said the College, and the profession more broadly, had “abrogated this responsibility” for too long. She also called for RANZCOG to drive greater education around sexuality and respectful relationships.

Moore’s take-home messages, in keeping with the ASM theme ‘Stop. Start. Continue’ were that RANZCOG:

She also impressed on colleagues that the US experience, which she shared in some detail having just returned from sabbatical there, showed you “can’t take your eye off the political ball”.

Moore described clinics having their electricity, water and waste collection shut off, and said opponents had “swapped Roe v Wade to just shutting clinics down”.

Professor Caroline de Costa, who was the first doctor in Australia granted permission to use the abortion drug mifepristone (also known as RU486), took delegates through a potted history of the drug, which she said had been politicised in Australia unlike any other medicine, and in a way unseen anywhere else in the world.

The Therapeutic Goods Administration restricts prescription of mifespristone (usually sold in combination with misoprostol as the preparation MS TwoStep) to specific groups of doctors, and requires all other providers to complete a training module before they can prescribe.

The TGA has also imposed specific conditions on the single group that distributes the drug in Australia – MS Health, which was established by Marie Stopes for this specific purpose – including provision of a 24-hour telephone aftercare service.

“These special requirements are not because the drug is difficult to use or poses dangers to Australian women,” said de Costa, outlining four major Australian studies showing MS TwoStep was safe, acceptable and effective.

“They were instituted in response to the political pressure applied to the TGA by politicians opposed to abortion.”

Not only were these restrictions unparalleled globally, de Costa said they had – as intended by those who agitated for them – a chilling effect on abortion provision, contributing to stigma both in broader society and within the medical profession. Just 1,500 of Australia’s 35,000 GPs are registered as MS TwoStep providers.

Even GPs who are registered still face the additional hurdle of finding a pharmacist who is prepared to get the drug in and supply it to their patients, which was not always easy outside of metropolitan centres, added Dr Deb Bateson, who is medical director of Family Planning NSW.

Bateson said this was sometimes a case of conscientious objection to abortion, but more often than not was down to the practice being out of a pharmacist’s comfort zone, underscoring the need for education and support.

Moore, de Costa and Bateson all stressed the need for GPs to receive greater support from RANZCOG and its members to offer medical abortion.

Using Victoria’s MyOptions website, where patients can search for providers, Moore demonstrated that when a doctor knew there were other doctors in their area offering abortion care who they could contact for advice and support, they were more likely to undertake the training themselves, resulting in service provision ‘clusters’.

“But what we really need is for people to set up in those blank areas of the map,” Moore said.

De Costa urged the College and its members to continue lobbying for the TGA to lift the restrictions on MS TwoStep, and to step up its education and support of GPs and trainees in mifepristone use. 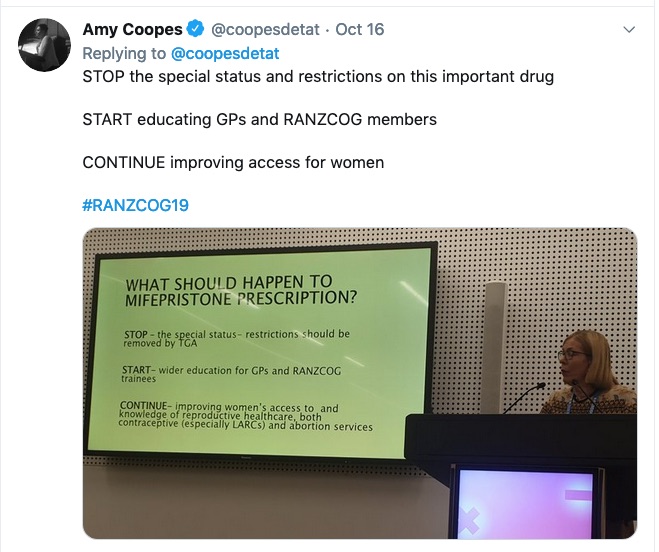 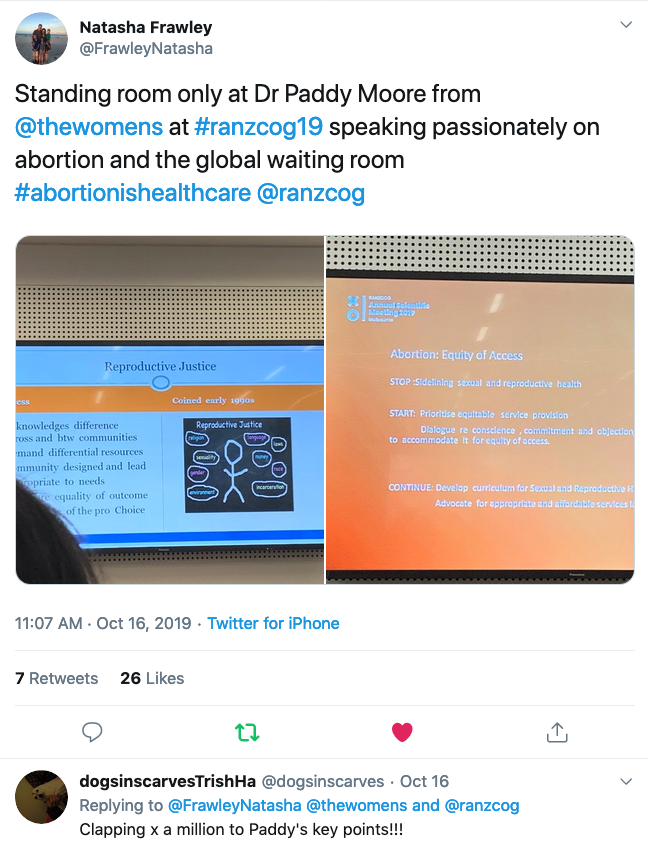 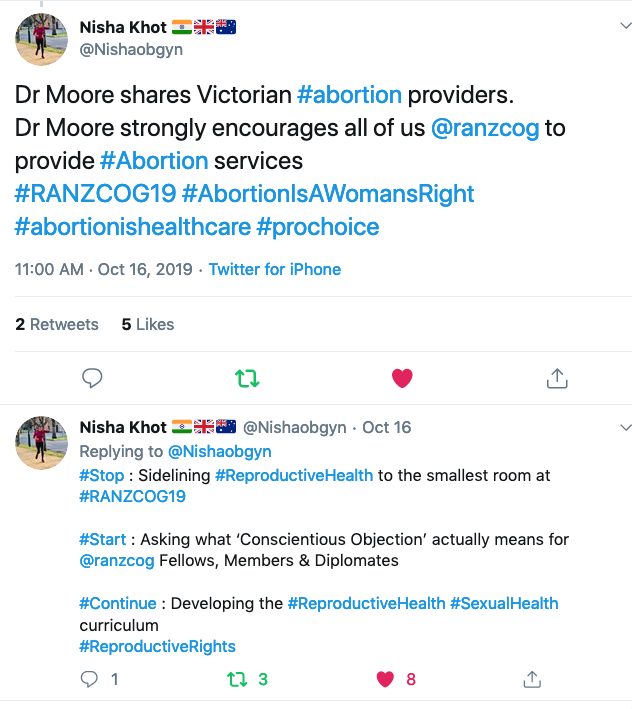 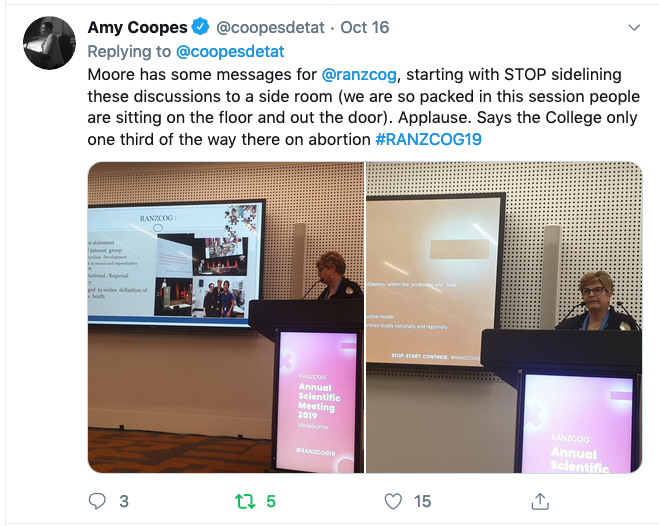 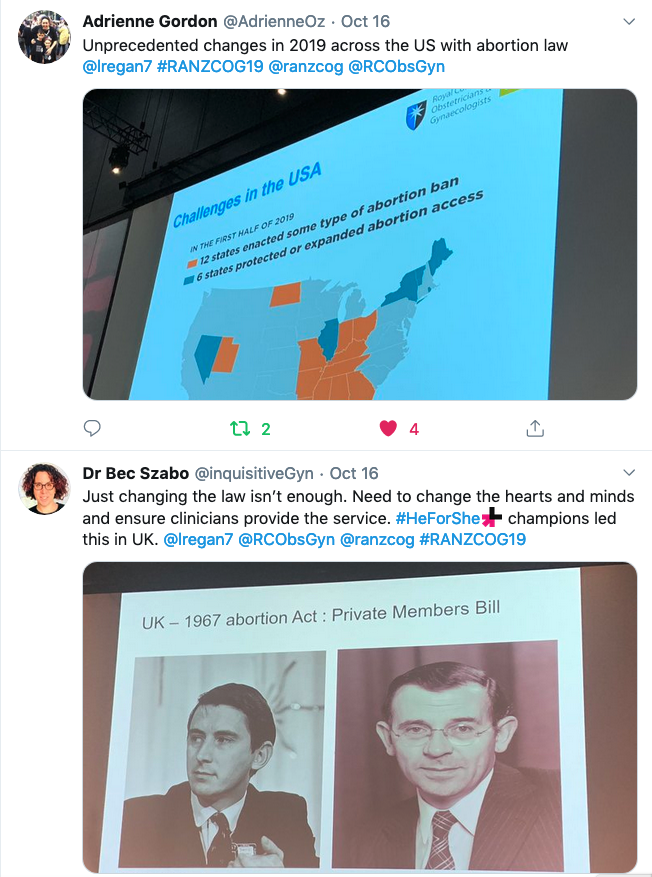 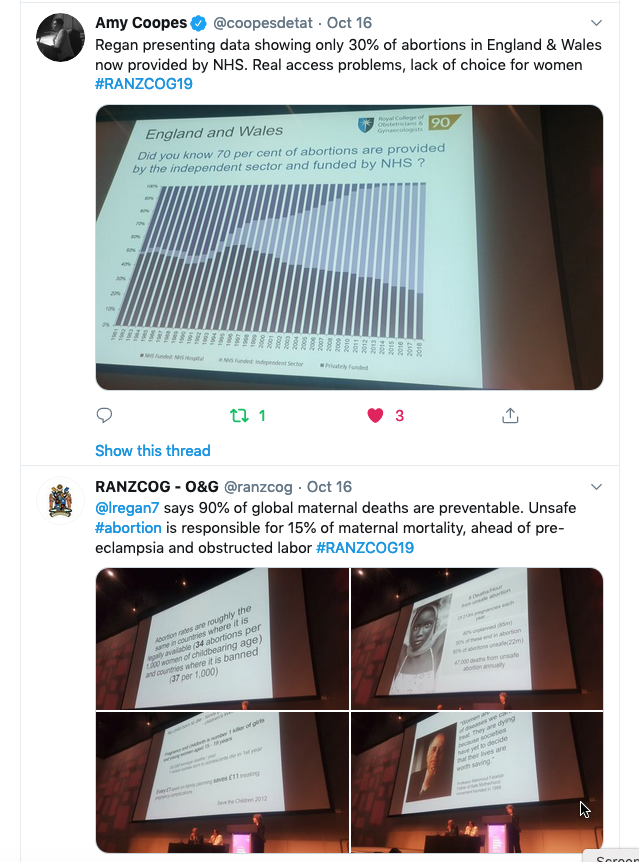 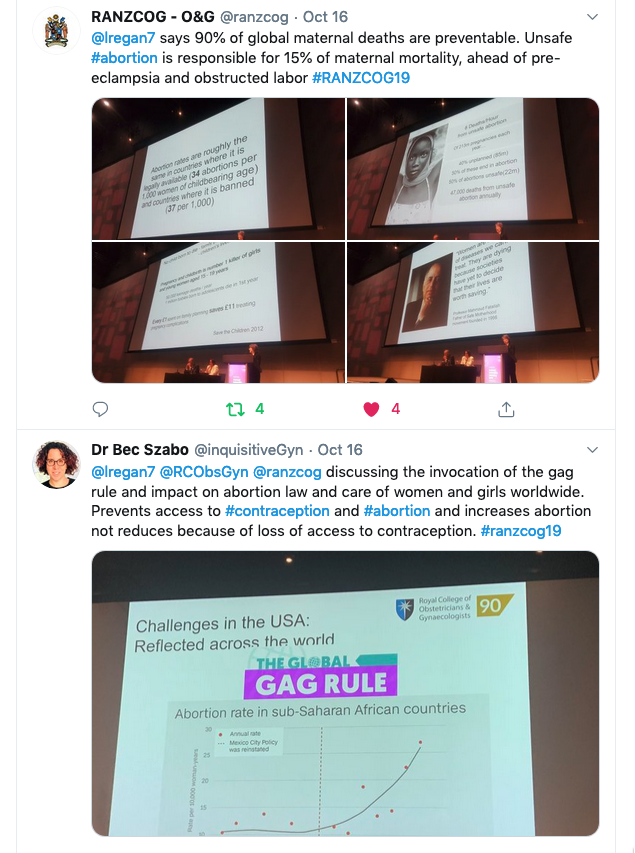 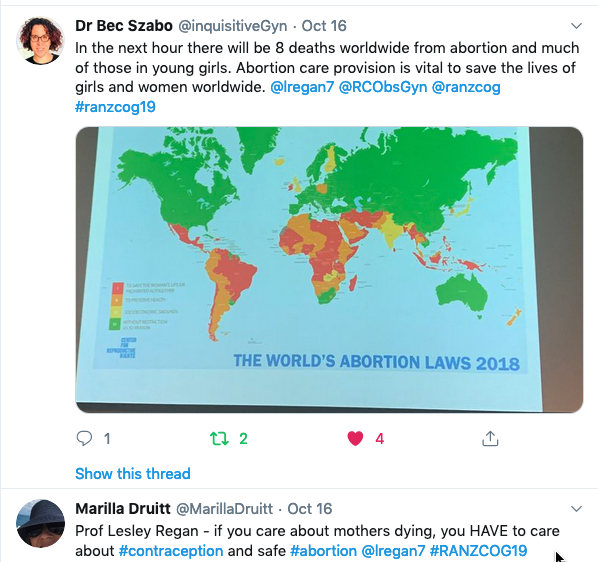 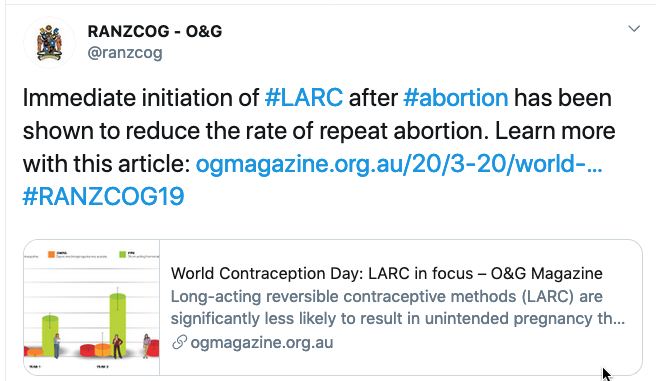 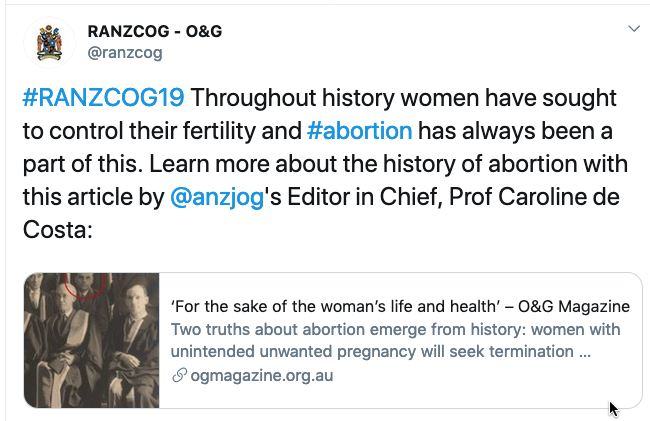