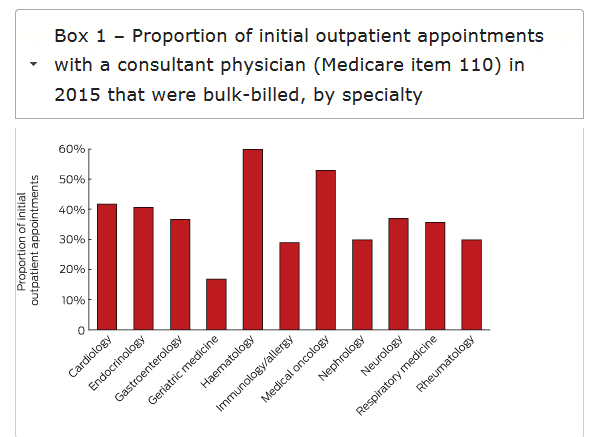 From the Medical Journal of Australia

Research published this week in the Medical Journal of Australia has once more ignited debate over variation of fees charged by specialists and calls for greater transparency, with the Consumers Health Forum of Australia calling for an “independent and authoritative website to list fees and ultimately data on the performance of specialists”.

Conceding it’s a controversial suggestion, the CHF says perhaps specialists who choose not to have their fees and performance published should lose eligibility to Medicare benefits and subsidised health insurance benefits. See its statement here, or published in full below.

The study, by Professor Gary Freed and Amy Allen from the University of Melbourne finds a dramatic range of fees charged within specialties for an initial physician outpatient consultation, varying within and between states. They conclude:

In the first post below, originally published in Medical Observer and republished here with permission, Dr Justin Coleman, a  GP and medical writer, says there may be valid arguments for cost variations, but they don’t take away from the need for costs to be made more transparent for consumers. He suggests a good start might be mandating that practice websites state the fee for an initial consultation in a standardised format.

Why greater transparency on specialist fees is a no-brainer

The question as to whether medical specialists should make their fees more transparent has long ruffled a few feathers.

The debate is raging afresh this week, sparked by a new study of billing data that reveals wide variations in specialist fees. The study, published in the Medical Journal of Australia, finds fees can vary up to five-fold within a single specialty.

As with any service, of course, some providers are of higher quality. But this is unpredictable. And as the study authors note, the rationale for fee variations is opaque without data on quality of care in private outpatient services.

An accompanying commentary cites unpublished research by the Royal Australasian College of Surgeons which finds “no correlation between the size of the fee charged and the quality of the surgery”.

Commenters have been quick to react, noting that the cost variation may reflect differences in office rental costs, the time spent per appointment, and the experience of the practitioner.

While these may be valid arguments for the existence of cost variation, they do little to counter the contention that costs should be made more transparent for consumers.

As a rule, transparency is the grease that keeps supply-and-demand systems running smoothly, and the confusion of the specialist fee system should be no exception.

Let’s say a GP suggests my child sees a dermatologist for acne, and recommends three good specialists. Whether or not I’d admit it to the GP, I’d have some curiosity as to the likely fee. It’s not the GP’s job to know, so I might end up phoning those three, plus a couple of other local dermatologists.

Yet that’s not how I compare prices of anything much else these days — by making a series of calls. Spending half-an-hour on the phone won’t help me decide on service quality. It will merely provide the exact sort of cost transparency which the study authors argue should be already available.

And I’m better off than most consumers. I speak good English, I’m used to conversations with receptionists, and I have the capacity to pay even a very high consultation fee — albeit reluctantly.

It won’t be easy to formulate a system of transparency. Maintaining an up-to-date website with comprehensive information would be a considerable impost on thousands of small businesses.

But surely health consumers are justified in pushing for something better than we have now.

A minimum standard might be mandating that practice websites state the fee for an initial consultation in a standardised format. Many do that already.

Specialists who worry that patients won’t understand why their costs are so high could, if they wished, add an explanation.

Although the two topics are often conflated, whether specialists are ‘worth’ their fees is an entirely separate discussion — one which does not need to be debated, let alone resolved, before moving on transparency.

In my view, there is little argument against making it easier for health consumers to become more informed about impending medical fees.

Medical specialists should be required to list their fees publicly to ensure patients are able to make better informed choices and avoid the ‘bill shock’ of unexpectedly high fees, the Consumers Health Forum said today.

“The publication today of reports showing dramatic variations in what specialists charge, highlights the pressing need for a transparent system that gives patients some power and choice about whom they seek treatment from,” the CEO of the Consumers Health Forum, Leanne Wells, said.

“We already know that many people avoid care because of cost. Affordability of care for the Australian community is a growing issue due to out-of-pocket costs which are on the rise.  Add to this these trends in fee variation and we will see even more patients stopping treatment or not seeking treatment early enough.

“We propose the establishment of an independent and authoritative website to list fees and ultimately data on the performance of specialists such as measures of quality. Quite apart from the expectation of consumers in the 21st century to be able to ascertain the cost and quality of services, it is reasonable to expect that a profession whose incomes are heavily reliant on the taxpayer and health fund members, should have their fees openly and easily accessible.

“Choice of specialist is an important healthcare decision for patients and their families – often the most important decision they will make in their lives.  There needs to be greater awareness about the referral process and the fact that patients already have the option to go to a specialist of their choice. However, given that around 60 per cent of Australians have low health literacy and are challenged by the complexities of our health system, it is far more preferable that referral and choice of specialist emerges as a shared decision out of an informed discussion between a GP and their patient based on a system that promotes transparency of fees and, over time, incorporates appropriate performance information.

“While a controversial suggestion, consideration could be given to those specialists who choose not to have their fees and performance published losing eligibility to Medicare benefits and subsidised health insurance benefits.

Ms Wells was commenting on a report that the amount paid by patients for an initial outpatient consultation varied more than five-fold in some specialties.  This was according to a study of Medicare billing data published in the Medical Journal of Australia. The difference in average out-of-pocket costs between the least and most expensive practitioners was $100 or more for eight out of 11 specialties – cardiology, endocrinology, gastroenterology, haematology, immunology/allergy, neurology, respiratory medicine and rheumatology.

Ms Wells has told MJA InSight that that the latest figures revealed a system urgently in need of repair.

“The paucity of publicly available information about the range of fees for specific services does not serve patients and informed patient choice well.  It is an unacceptable feature of Medicare which should and can be fixed urgently. The at-times stark differentials in fees for the same operation exposes patients to a random maze of costs for which there is no transparent explanation or justification.

This hits patients at their most vulnerable, contributes nothing to the quality of the health system and does not reflect well on the medical community whose prime duty is to supply best medical care.

“Quite apart from unexpectedly onerous fees, there is no way the patient can gauge whether higher fees represent higher quality. It is also important that patients do not think that higher fees automatically equate to superior access, quality and outcome.

“The authors of these reports also discuss a number of issues that might be contributing to the variation. We endorse their suggestion that there is a need for more research into the causes of this variation.

“To some extent at least it appears that higher fees are a factor of supply and demand, as well as the recognition by many specialists of limited means of some patients. A good example may be the modest gaps charged for geriatric patients. Those specialists in short supply, for instance, may also charge higher fees not necessarily out of pecuniary considerations but as a way of restricting their waiting lists to the most pressing cases. The cases of much higher fees charged by some seem to indicate a practice based on what the market will bear. That again would justify our call for a strong system of transparency.

“Consumer sovereignty is a prevailing principle in most other markets, its principles should also prevail in the healthcare market,” Ms Wells said.