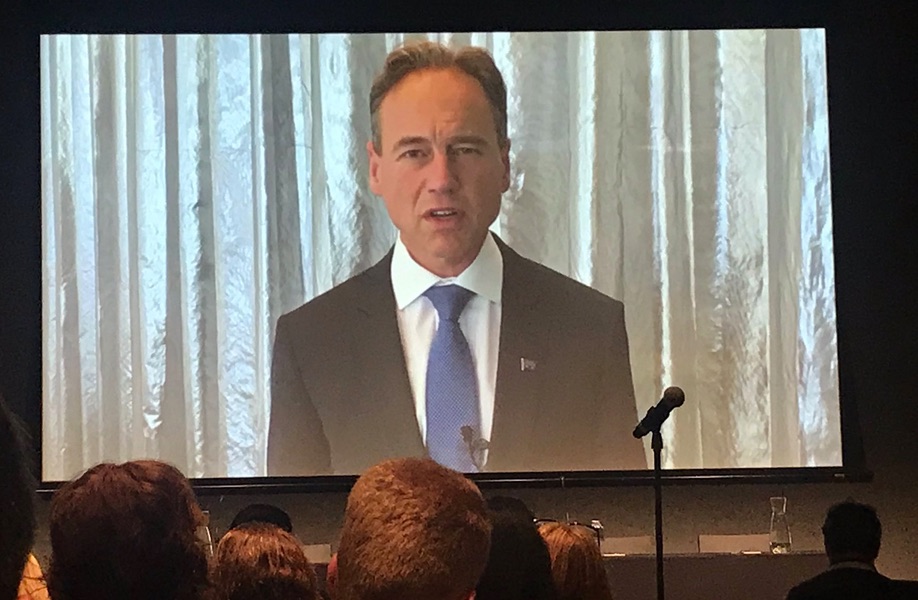 Health advocates have welcomed plans for “a long-term national preventive health strategy”, announced today by Health Minister Greg Hunt, but warned that it must not take a narrow focus, and should prioritise action on climate change, poverty and other determinants of health.

In a presentation by video to the Public Health Prevention Conference in Melbourne, Hunt said he would convene a roundtable to progress development of the strategy “in the near term, to have your views, your advice, your comments, frank and fearless as always”.

Although speaking to an audience of public health professionals with a broad view of what prevention entails, the Minister’s speech was largely focused on medical interventions, including describing the importance of new medicines in tackling chronic conditions.

“Many of you have been advocates for such powerful new medicines as Spinraza for spinal muscular atrophy, Tagrisso for lung cancer, cystic fibrosis being covered through the new medicines such as Orkambi, so thank you for that,” he said.

(As an aside, Croakey is old enough to remember when it would have raised eyebrows for a health professional, let alone a health minister, to use the brand name of pharmaceuticals in public announcements, lest this be mistaken for marketing.)

The announcement today is something of a back-to-the-future moment, given the 2009 publication of a 307-page National Preventative Health Strategy – the roadmap for action, which laid out a vision for how Australia could become the healthiest country by 2020.

Professor Rob Moodie, who chaired the former National Preventative Health Taskforce that developed the 2009 strategy, lamented a lack of action since then in preventing diet-related diseases such as obesity, diabetes and cardiovascular diseases.

So many Australians have died and become sick because we, as a nation haven’t acted. These diseases have been driven a huge rise in the consumption of junk food and drinks over the last twenty years.

As so many clinicians (including bariatric surgeons) say, we can’t treat our way out of these problems.

The only way these will be controlled is to limit the saturation junk food and junk drink advertising to our kids (and adults), to mandate effective front of pack labelling, to increase the cost of sugary drinks to drive down really unhealthy levels of sugar consumption and to encourage industry to move to healthier products much quicker than is envisaged and finally fund smart, appealing emotionally engaging social marketing campaigns over the next five years.”

Moodie said he welcomed the Minister’s focus on immunisation and cancer prevention such as cervical and bowel cancer programs.

“The biggest contributors to reducing the burden of disease, to improving life expectancy and quality of life over the last ten years have been large population health programs in tobacco control (now down to 10 percent in Victoria), road trauma, and injury prevention,” he said.

Dr  Cassandra Goldie, CEO of the Australian Council of Social Service, urged the Government to look at people’s health and wellbeing holistically.

We know that lifting the incomes of people with the least has a huge benefit for people’s health. If you live in poverty, it is not only your bank balance that suffers. Your health, your education and your wellbeing also deteriorate.

We could do a lot for the health of the nation if we ensured that everyone can afford to eat three meals a day and keep a roof over their head. That is why we must raise the rate of Newstart and other allowances to help people struggling to get through tough times on $40 a day.”

Goldie also urged action on the health impacts of climate change, which she noted is recognised by the World Health Organization as one of the greatest threats to human health.

For example, in Australia more people die from heatwaves than any of natural disaster, dengue fever is spreading further south, and deadly asthma storms are likely to increase. People on low-income or experiencing disadvantage are most at risk.

Rapidly reducing our emissions and building resilience to climate change should be a core part of preventative health strategy. There are a range of actions the federal government should be taking but are not.

A critical action for people on low incomes is to improve the energy efficiency for existing homes which will directly improve health outcomes and reduce our emissions.”

Summer May Finlay, a Yorta Yorta woman, public health practitioner and contributing editor at Croakey, also stressed the need for the strategy to address poverty, food security poor housing and the living conditions that contribute to preventable conditions such as Rheumatic Heart Disease.

She said: “Climate change and poverty should absolutely be part of the strategy. We need to go back to Bob Hawke’s goal of eradicating child poverty. If we want to genuinely have preventative health strategies, we should be aiming for that.”

She added that prevention efforts need to be tailored so they are appropriate and effective for specific populations, whether LGBTQI people, Aboriginal and Torres Strait Islander people, or people from culturally and linguistically diverse backgrounds.

It’s fantastic that we’re talking about prevention, but we need to take a whole system approach, which means tackling some of the curly things like the influence of the alcohol and food industry, and revisiting the sugar tax.”

Jo Walker, a director of the Climate and Health Alliance, welcomed the Minister’s prevention agenda, but called for a focus on primary prevention strategies:

And for 21st century public health – this has to include addressing emerging threats from climate and health related issues, for example, air pollution, water quality, heat stress, energy use and sources, sustainable food systems, changing patterns of disease.

CAHA would welcome a seat at the roundtable to assist in addressing co-health benefits to prevent  climate and health related disease and injury.”

Mrs Janine Mohamed, CEO of the Lowitja Institute and chair of Croakey Health Media, said she would welcome greater investment in comprehensive primary healthcare as part of the strategy.

She said the Aboriginal Community Controlled Health Organisation (ACCHO) sector provided an “amazing blueprint” for informing development of the strategy:

Our concept of comprehensive primary healthcare is holistic; it’s about having services that are designed, developed and evaluated by the community.

If any preventative primary healthcare programs are going to be put into place, it’s an opportunity for them to honour Aboriginal ways of knowing, being and doing.”

Fran Baum, Matthew Flinders distinguished professor of public health at Flinders University, welcomed news of the strategy but said Minister Hunt’s speech suggested he was taking a very medical approach which would not be effective in key areas.

She called instead for “a national health and wellbeing strategy that encourages all sectors to work for health”.

Baum said it was disappointing to see no focus in Hunt’s speech on the social determinants of health or the need to set a goal to reduce the glaring health inequities in Australia by race and class.

I also find ‘preventive health’ a strange term. Who wants to prevent health?

I would suggest what we need is a long term disease prevention (which is what the Minister’s speech focused on) and a health promotion strategy. This strategy should set goals concerning the reduction in health inequities. At the moment in Australia they are increasing.

The health promotion aspects would focus on how all sectors are able to contribute to making Australians healthier by creating health and supportive environments that make healthy choices the easy choices. This includes healthy urban planning, increasing access to natural environment (great for mental health promotion) and healthy transport choices (increasing the accessibility and affordability of public transport).

The strategy should aim to create healthy food and beverage environments so that advertising and marketing of fast food and high sugar drinks to children and alcohol to adults is greatly restricted.

A national health promotion strategy would examine the health costs of these employment trends and seek to reverse them. A further example is that housing has become more expensive and home ownership unaffordable for some. In Sydney and Melbourne in particular there are housing crises that affect people’s health adversely.

Unless we begin to take the social determinants of health seriously in policy and health strategy documents, health inequities will continue to increase and the health gains that have been made over the last decades may reverse as is being seen in the US and UK.”

Coming on the back of other important Government commitments such as child dental services, this is further recognition that our health system can be highly effective when it works to prevent poor health, not simply to respond to illness.

From Health Justice Australia’s work with health and human services across Australia, we know that many of the problems undermining people’s health are highly preventable.

They are also problems driven by non-medical factors such as quality of housing, adequacy and security of income, social connectedness and economic participation. These factors are underpinned by the very strong evidence of the social determinants of health: that 75 percent of the factors determining people’s health sit beyond the health-care system.

The pathway to prevention of poor health lies in well-coordinated and connected services that respond to community needs and that recognise the many factors beyond the medical that affect people’s health.

We look forward to supporting the Minister to develop a National Plan that takes account of this clear and critical evidence for the pathway to prevention.”

Focus on those at greatest risk

CEO of the Public Health Association of Australian (PHAA), Terry Slevin, said the strategy “must focus on those with the greatest need and those at greatest disadvantage because we know that poverty and minority vulnerabilities have a profound impact on health outcomes.”

He also noted that developing the strategy was “only the first step” and that it must be followed by action and investment to enable effective implementation.

“Time is of the essence given rising rates of chronic illness in Australia, preventable diseases that are burdening children and young people especially,” he said in a statement.

The PHAA would like to see greater effort on:

The above would require setting a national target of five percent of Australia’s health budget to focus on prevention, Slevin added. 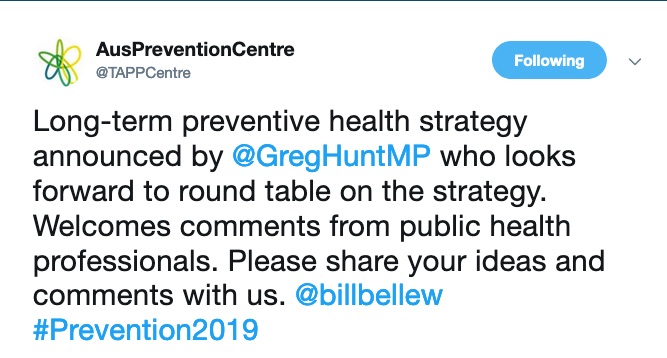 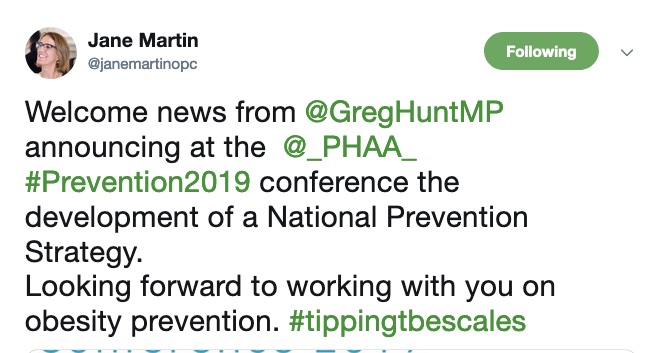 Meanwhile, also speaking at the Public Health Prevention Conference, the Victorian Parliamentary Secretary for Health, Anthony Carbines, said the new statewide Victorian Health and Wellbeing Plan would be released in September. He also spoke of the importance of tackling social isolation. 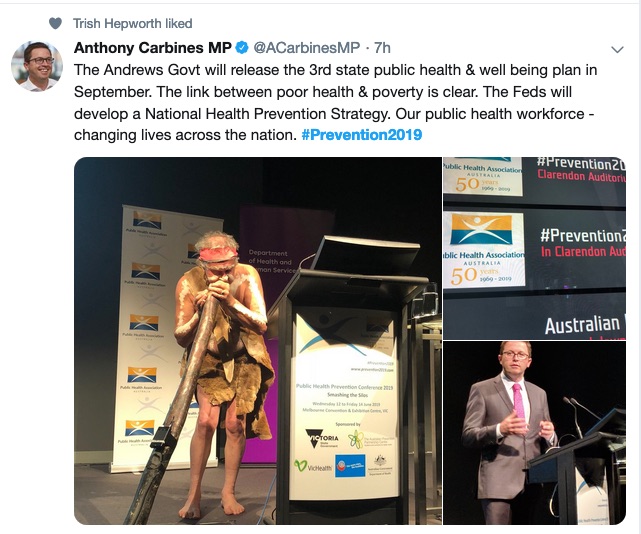 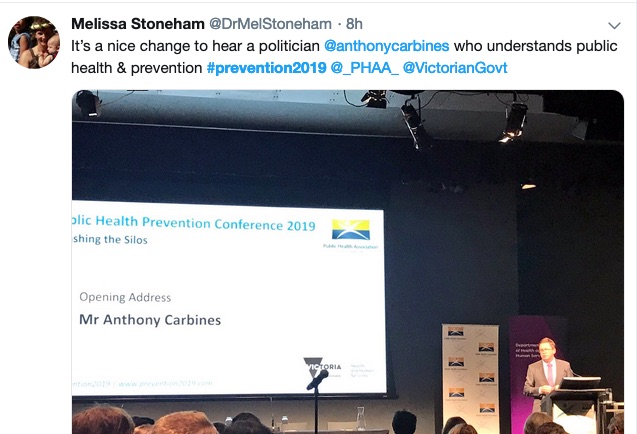