Jackie Crowe, an articulate and diplomatic reformer for mental health

Celebrating the contribution of Jackie Crowe to mental health

The mental health sector lost one of its most articulate and diplomatic reformers on the weekend, with the announcement of the death of Jackie Crowe.  Among several professional roles, Jackie had been a member of the National Mental Health Commission since its inception in 2012.  She was incredible fun, with a terrific sense of humour and irony.  She was a mature person, contributing at the highest level in a critical and difficult area of public policy.

Jackie was a passionate advocate for safety and quality in mental health care.  Mental health consumer advocates are still often subject to tokenism, asked to join boards or committees for appearance’s sake rather than to contribute substantively to debates.  Jackie would have none of that.

Her capacity in this regard was borne from a gift that enabled her to judiciously balance perspectives.  Particularly based on her own experiences, it would have been easy to just be angry, bitter, loud and twisted about the way the system worked –  or failed.  She chose another path.  It must have been difficult; learning, sharing and listening carefully to health professionals and bureaucrats and academics and others when she perhaps would have preferred to shout.

This is not to say Jackie lacked force in any way. She was a potent and powerful person and speaker.  She was a persuader, but this came from what she had heard.  She made herself bigger than her own experience.  This is often difficult for health consumers.  “Nothing about us without us” is just a demand to be present.  What made Jackie so potent was her capacity to move beyond this and evolve a broader view of our broken mental health “system” and see the role we could each play in its betterment.  Her gift was to encourage us all, without prejudice – consumers, carers, health professionals, everyone.

And there is so much to do.  In the short days since her passing, the full strategy of Jackie’s approach has perhaps become even clearer.  It seems there are several of us in the mental health sector who, in one way or another, have been left shoes to fill, jobs to do – to continue Jackie’s careful work in watching the mental health system, making it safer and better for consumers and their families.

And there are so few people seriously watching.  Jackie was one of them – a real, good one. Vale Jackie. 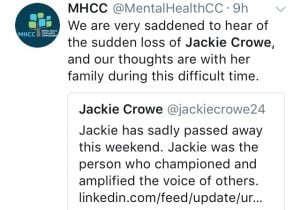