Home Croakey projects #CoveringClimateNow Climate change is making us sick, but the solutions offer a healthier, brighter future for all 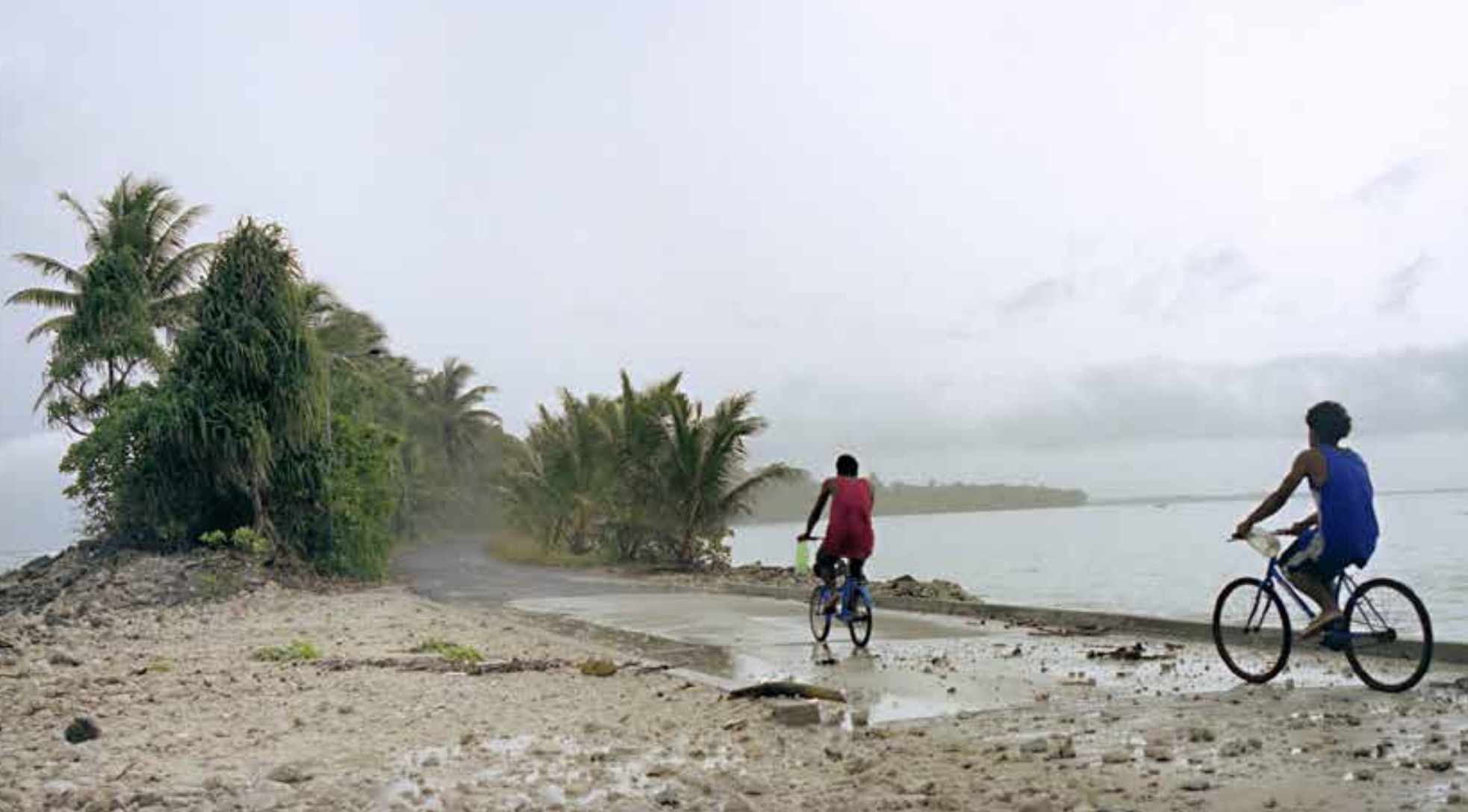 Image from cover of Oxfam publication, Save Tuvalu, Save the World:The Climate Crisis and the Pacific

Climate change is making us sick, but the solutions offer a healthier, brighter future for all

Introduction by Croakey: In the Bahamas, the devastating aftermath of Hurricane Dorian provides yet another example of how the climate crisis is exacerbating inequality, and of the importance of centring the most affected communities in responding to the crisis.

In the article below, the Chief Executive of Oxfam Australian, Lyn Morgain, calls for those on the climate frontlines, from Bangladesh to the Pacific, to be properly supported in building resilience to the impacts of climate change that can no longer be avoided.

She also calls for “immediate, bold and transformative action” on the climate crisis, and shares some hopeful reflections about how the solutions to “this defining challenge of our times” offer tremendous benefits for our health and communities.

Whether we emerge from the climate crisis as a healthier, happy and more just society – or spiral down into an era of crushing inequality, people being forced en masse from their homes and declining health – depends on fully recognising the gravity of the challenge we now face and responding in ways that are rapid, life-changing and, above all, led by the priorities of our most vulnerable.

No aspect of our global community, our individual wellbeing and our natural world are untouched by the unfolding climate crisis.

As such, there are many different paths through which we have each woken to the dangers and opportunities of the current moment and joined the fight for climate justice.

For some, it is the impact of on our beloved reef and other critical ecosystems. Or it may be the crippling toll of climate change on our farmers.

For me, it is off the back of 30 years of working in community health, human rights advocacy and women’s leadership, and now as the Chief Executive of Oxfam Australia – an organisation committed to tackling poverty, hunger and inequality and working towards a world in which everyone can thrive.

Put simply, the climate crisis is the single greatest long-term threat to health and wellbeing. This was powerfully called out by our own Australian Medical Association earlier this month, building off similar pronouncements from the World Health Organization, Global Health Alliance and other authoritative voices.

These assessments have also laid bare the deep injustice of our climate crisis: those who have done least to contribute to global climate pollution tend to be among the worst hit and to have the least resources to cope with these new stresses. After years of decline, global hunger is on the rise again, with climate change a leading cause.

Just as the impacts of global heating on our physical health, from heat stress to rising hunger to vector-borne diseases, are becoming painfully apparent, so too is the rising strain upon our mental and spiritual wellbeing. The anxiety faced by farmers as they struggle to cope with prolonged droughts. The grief experienced by generations young and old as they witness the loss of species and the degradation of natural wonders. The rise in domestic violence in the wake of extreme weather disasters. The risks of conflict as populations compete over dwindling resources. And the profound toll upon a community of being severed from its ancestral home as rising seas swallow sacred lands.

In the midst of these terrifying realities, we can often be left wondering where to find hope.

Fortunately, in 2019, hope can be found everywhere. From the indomitable school strikers rising up in their hundreds of thousands to lead the older generations towards a more just and sustainable future. To the Pacific ‘large ocean states’, which are determined to lead from the front and chart their own course based on traditional Pacific values and strengths, and to hold the big polluters to account.

And for all the confronting facts about today’s escalating climate crisis, there is one very convenient truth: What works for the climate works for people too.

In other words, the solutions to this defining challenge of our times, from local renewable energy to empowering young women leaders, offer tremendous benefits in terms of local livelihoods, food security, health, equality and even strengthening our democracies.

The challenges are no longer technical or even economic, but political.

It is matter of breaking free from a politics polluted by dirty money, from the concentration of power in the hands of a few, and from the centralised energy systems of the past. And building a prosperous, clean-energy powered future, in which the benefits are shared by all.

While the increasingly favourable economics of renewables are already driving a global transition from fossil fuels, experience has shown that this transition must be carefully managed. The market alone will not create the future we all want.

Special attention must be given to those communities where their past has been wedded to the fossil fuel industry and who, like everyone, must find their place in the post-carbon economy.

Those on the climate frontlines, from the Sundarbans of Bangladesh to the atoll nations of the Pacific, must also be given adequate support with building resilience to the impacts of climate change that can no longer be avoided.

The recent spate of bombshell reports, including the defining report of the Intergovernmental Panel on Climate Change last October on limiting warming to 1.5C, have carried another equally important message, often lost in the clamour.

It is not too late to limit warming to 1.5C – a matter of survival for many vulnerable communities around the world – and to build a brighter future for all.

But this requires immediate, bold and transformative action.

For the Australian Government, the message is clear. There can be no new fossil fuels, including the Adani mine. By 2030 we must transition out of thermal coal exports and shift Australia to 100 per cent renewable energy, and be on a path to zero emissions well before mid-century.

And we must steadily ramp up support to communities in our region and beyond with dealing with the ravages of climate change.

Australia must substantially increase its contribution to international climate finance, as part of a growing aid budget, and including through a new contribution to the Green Climate Fund.

Its recent commitment of a further $500 million for climate and energy programs in the Pacific saw this money diverted from within the existing aid budget, and the Government standing by its decision to withdraw from the Green Climate Fund – a decision that looks set to further tarnish our international reputation.

From Tuvalu to the Torres Strait, those on the frontlines of climate damage are calling us out and showing the Australian Government what real climate leadership looks like.

And across Australia, cities, states, businesses and communities are forging ahead, in spite of government inaction.

No one has ever said that confronting this greatest challenge of our times would be easy. But the promise of a happier, healthier world, and a secure future for our children, is one worth fighting for. 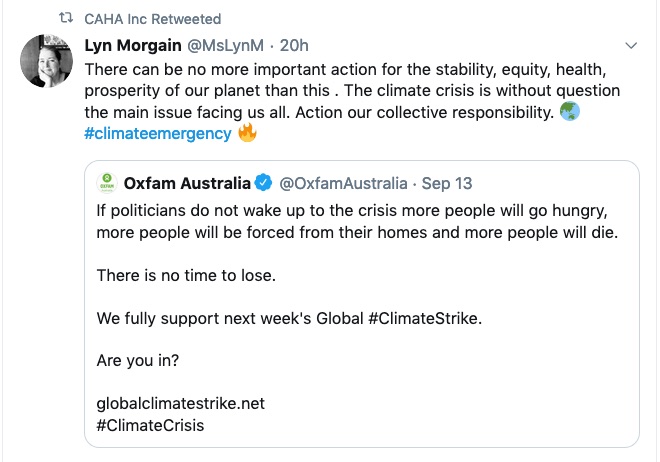 • This article is published as part of the Covering Climate Now initiative, an unprecedented collaboration involving more than 250 media outlets around the world that is putting the spotlight on the climate crisis in the leadup to a Climate Action Summit at the United Nations General Assembly in New York on 23 September. It is co-founded by The Nation and the Columbia Journalism Review (CJR), in partnership with The Guardian. Croakey invites our readers, contributors and social media followers to engage with these critical discussions, using the hashtag #CoveringClimateNow. See Croakey’s archive of climate and health coverage.