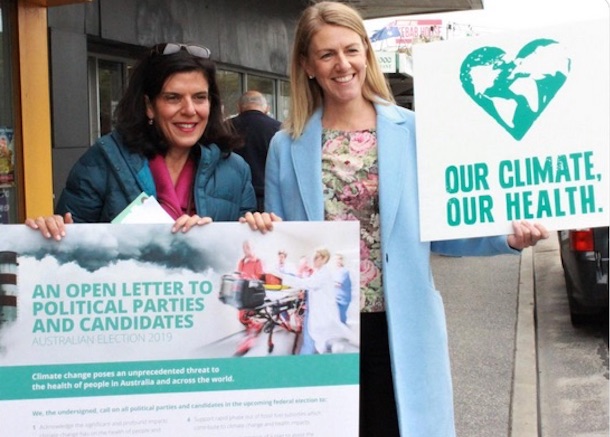 Climate inaction: coming back to bite?

On the eve of election day, Melissa Sweet reports on critical climate and health concerns facing voters – and why the politics of climate change are so challenging for Health Minister Greg Hunt.

Since Greg Hunt was appointed Federal Health Minister in January 2017, the Climate and Health Alliance (CAHA) has reached out many times, inviting him to engage with development of national climate and health policy.

“We’ve asked for meetings, we’ve invited him to attend events, to contribute to discussions,” CAHA founder and executive director Fiona Armstrong told Croakey this week. “We never heard back from him.”

The exception was a letter dated 12 November 2018, where Hunt referred to “the potential impact of climate change on human health” and more or less suggested the Government was already doing everything necessary on the issue.

His letter did not acknowledge or address wide-ranging recommendations for climate health action put forward 18 months earlier by a broad-based coalition of health and medical groups.

These were from a detailed roadmap for national action on climate launched in Parliament House in Canberra in June 2017, The Framework for a National Strategy on Climate, Health and Well-being for Australia.

Minister Hunt was invited to the launch but did not attend. Indigenous Health Minister Ken Wyatt attended and his supportive comments for the framework clearly indicated a real concern for the wide-ranging health impacts of climate change.

Armstrong says Hunt is not the only Coalition Health Minister to rebuff CAHA’s approaches. His predecessor Sussan Ley also made clear her disinterest in engaging with climate and health policy development, says Armstrong.

On one level, this is perfectly understandable. The framework lays out wide-ranging recommendations for a whole-of-government response to climate change.

It would be challenging for any health minister to drive such cross-portfolio changes in any government, never mind in a government so rent by internal divisions and ineffective climate policy – as the emails below remind us.

On 19 March this year, Greg Hunt began his regular newsletter to his electorate: “Like most people in our community, I support action on climate change…” 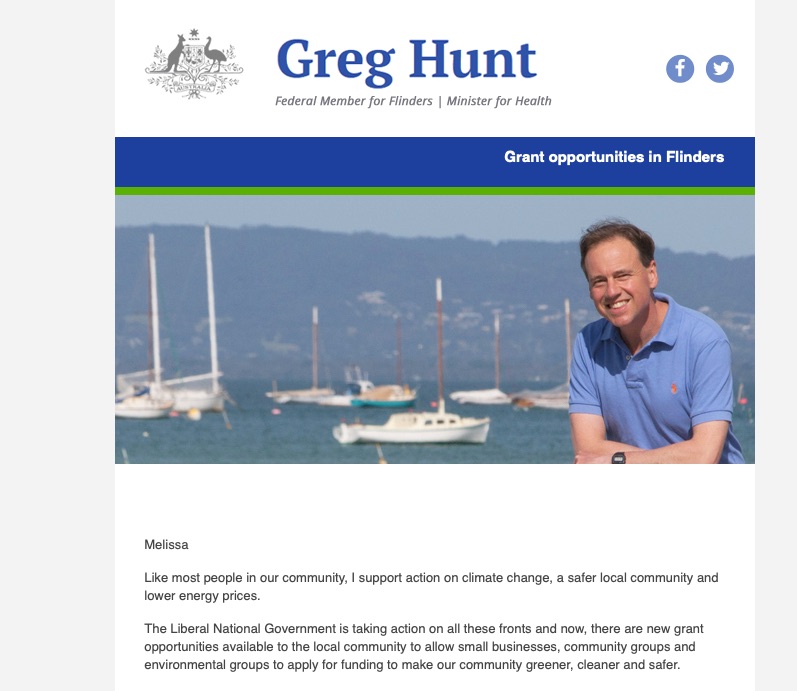 Just days earlier, on 8 March, Hunt’s Liberal Party colleague, Craig Kelly, emailed a constituent who had asked for an explanation about why Kelly continued to oppose climate action.

Kelly replied that climate science was “junk science”, said “today we have never been safer from extreme weather”, and argued against transitioning to renewables.

Next month, it will be two years since the Framework was launched. It’s timely to imagine where we might have been now, if Greg Hunt and colleagues had been able to provide effective leadership on climate and health.

These are a few of the things that might have happened:

While the Federal Government has failed to provide national climate and health leadership, some jurisdictions, including Queensland, NSW, and Western Australia, have been active.

The meeting brought together climate and health researchers, clinicians and policy makers, to identify priority issues for Tasmania, while recognising many solutions fall outside the health sector.

In an interview with Croakey the day after this meeting, a leading climate and health researcher Professor Liz Hanna described the accelerating impacts of climate change, and urged an urgent national response as in times of world war, to work towards a low carbon economy.

The longer we leave it, the more strict we are going to have to be and the more ugly it will be.

The onus is on every single person to do everything they can.”

In the lead up to the election, many health professionals and organisations have been working tirelessly to raise wider public and political awareness of the need for urgent action on this global health emergency.

Whatever the outcome of the election, it is clear this advocacy will remain critical.

While Labor has committed to developing a climate and health strategy based on the framework, their overall climate commitments leave much to be desired. Armstrong says Labor’s support for fracking and coal-mining are “completely inconsistent” with effective climate action.

She says the next government must prioritise a climate and health education campaign:

The links between climate and health are still not well understood.

When people understand those links, it’s very powerful in helping them to understand why climate change is an issue right now.

Informing the community can unleash an explosion of support for action and build peoples’ capacity to take action.”

Armstrong says many nurses and other clinicians in the health sector are working hard to reduce the sector’s environmental footprint but that much more support is needed for this work, from policymakers and funders.

Given that some climate change impacts are already locked in, investment is also needed to make health systems resilient to the inevitable stresses of extreme weather events and other climate-related demand. She says:

We know at CAHA from our engagement with the sector that there is very little going on in terms of assessment of risk from climate change.

The health sector needs to be supported in making climate risk assessment core business. That will help them understand where the investment is needed to prepare.”

Education campaigns also need to help local communities better prepare for, cope with, survive and recover from climate-related emergencies, Armstrong says, and these campaigns would also help to build trust and support for climate action:

An incoming government that was very clear about the threat that we face and very open to working with the community to tackle this threat would be a great way to build trust with the community, given that it’s so undermined by the endless debates about climate change we’ve had in the Federal Parliament.

People would welcome some honesty that this is a complicated issue, there are solutions available and governments are prepared to work together with community to build solutions.

There is a huge amount of good will in the health sector to work with government but they need to be willing to listen to and respond to those concerns.”

Climate health advocates have been working hard during the campaign to get out the message to vote for climate (see climate-related election scorecards in this previous Croakey post). Armstrong says:

We feel like this is our last chance as a Parliamentary term to really embed definitive action on climate change for Australia, or we miss the window of opportunity. We can’t delay any longer.”

It’s a message that may come back to bite Greg Hunt, who has been surprisingly low-key as a health minister in an election campaign where health has otherwise been a prominent issue.

His once-safe Liberal seat is under challenge – and one of his contestants is former Liberal colleague Julia Banks, who has been campaigning for climate action. 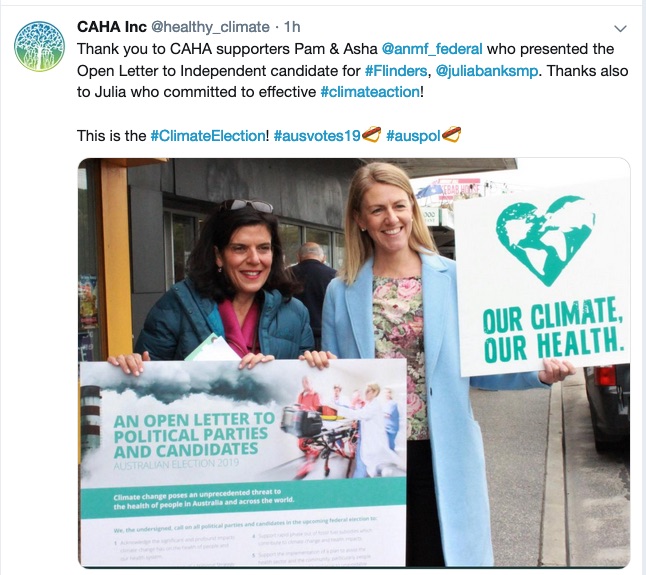 It’s interesting that a message sent this afternoon to the Flinders electorate by Prime Minister Scott Morrison does not mention climate change. 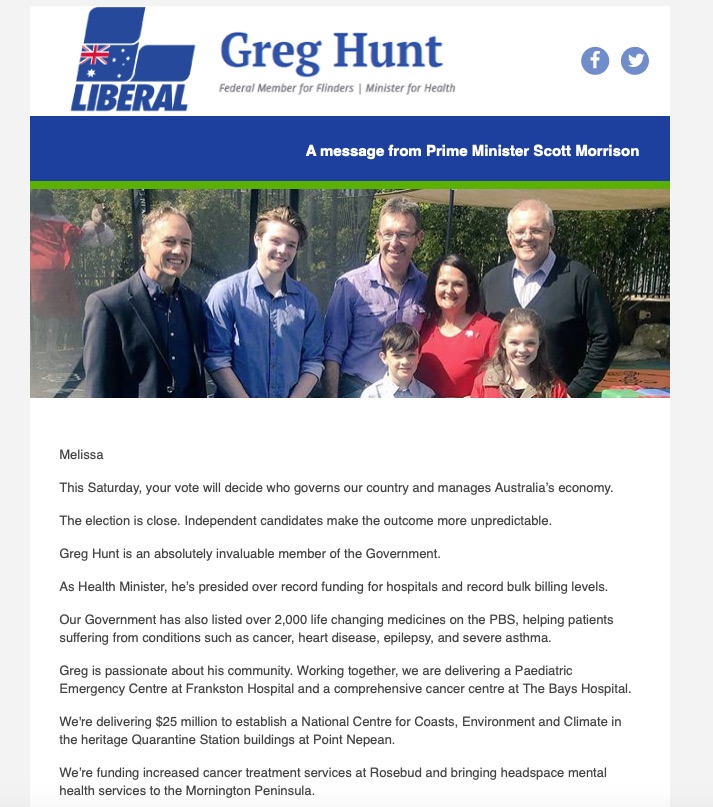 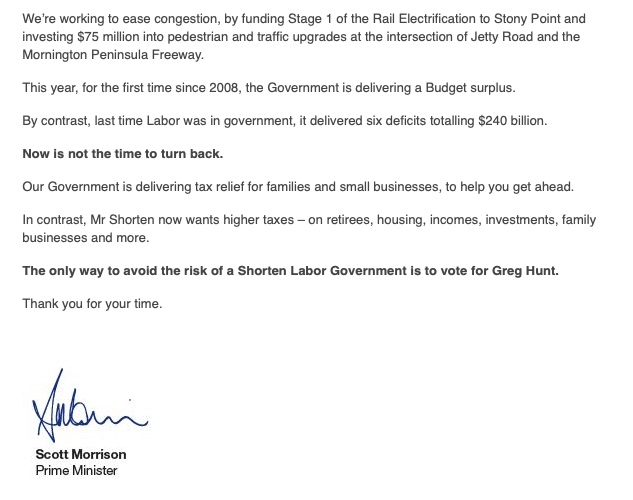 Morrison must have missed the memo: it’s a #ClimateElection. 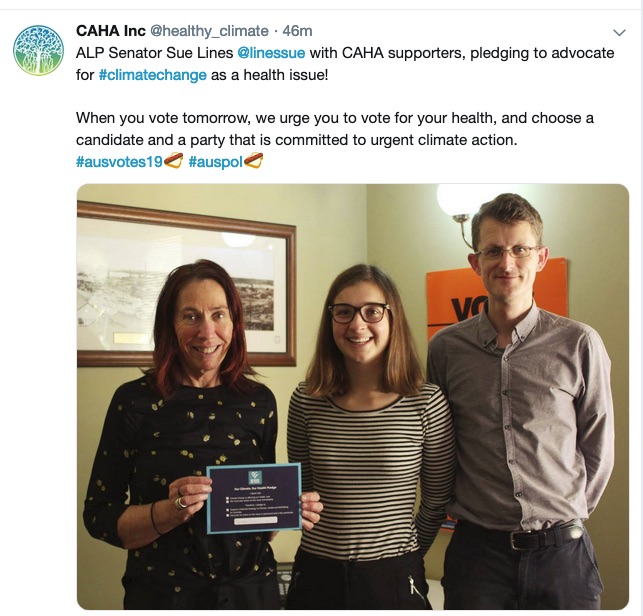 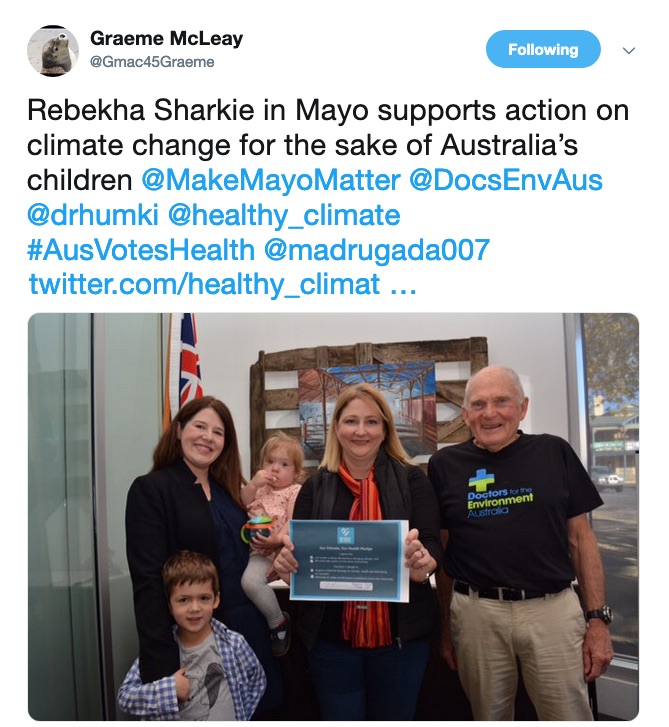 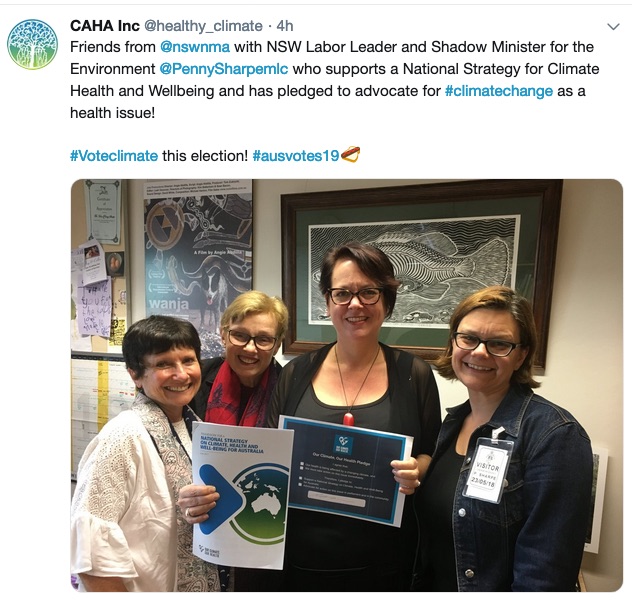 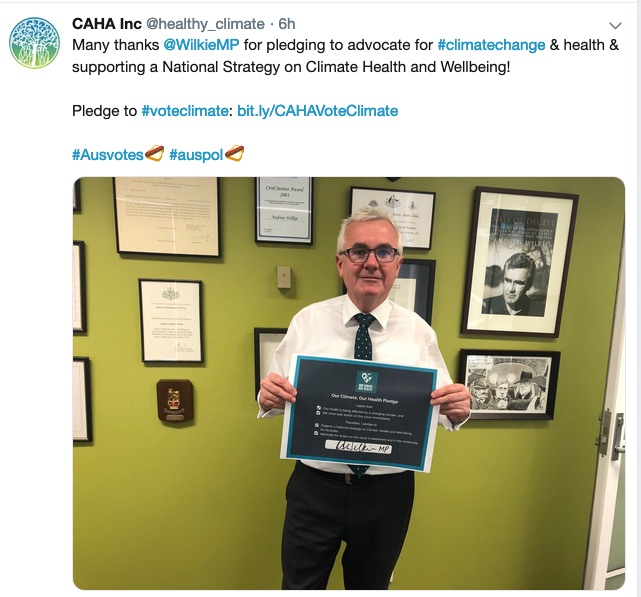 A message from health leaders

• Croakey readers may be interested in my recent article in The Guardian: Inequality and climate change: the prefect storm threatening the health of Australia’s poorest.