Home Public health and population health health inequalities Close the Gap: ‘Do things with us, not to us.’ But make sure you do them & don’t do harm! 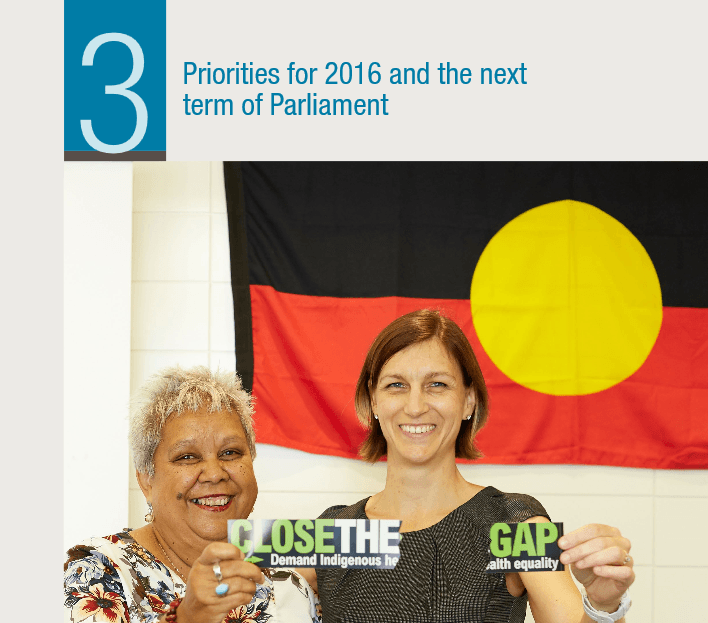 Updated 13 February, with  Age story about the Prime Minister opening his Closing the Gap address in the language of the Ngunawal, the people on whose land Parliament House was built.

With the Close the Gap campaign marking its 10th anniversary today, Prime Minister Malcolm Turnbull delivered his first Closing the Gap progress report, much touted as his first major speech as PM on Indigenous issues.

As expected, progress continues to be disappointing, with only two of seven targets – cutting infant mortality and getting more students to finish high school – on track to be met . The Prime Minister said:

“While Indigenous mortality rates have declined since 1998, the life expectancy gap is still around 10 years – an unacceptably wide gap, and this target is not on track to be met by 2031.”

Here’s his speech to Parliament and his earlier address to the Close the Gap 10th anniversary Parliamentary breakfast. (Curiously, unless I missed it, there’s no neat graphic in the report this year showing progress on each target (who wants to broadcast failure, right?), so here’s the ABC version.)

There were no big announcements or policy shifts, just a promised $20 million in additional funding over two years for the Australian Institute of Aboriginal and Torres Strait Islander Studies (AIATSIS) for the collection of critical cultural knowledge – welcome in the wake of Tuesday’s State of Reconciliation report – and little acknowledgement of the priorities urged by the Close the Gap Campaign’s own report card, released earlier in the day (more below) by  Co-Chairs Mick Gooda and Dr Jackie Huggins. (Updated: see this fascinating story in The Age about AIATSIS’ role in Turnbull’s wish to open his speech in the language of the Ngunawal.)

The Prime Minister talked about high rates of Indigenous imprisonment, but remained silent on when, if ever, the government might meet its election promise to add a Justice target, as has long been urged by the Close the Gap Campaign. There was no acknowledgement either of the impact of massive cuts in government funding to Indigenous services over the past years or the shambles of the In 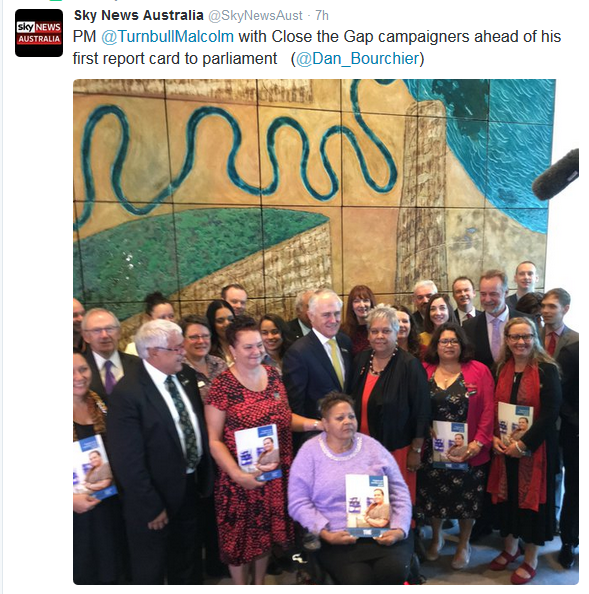 Turnbull expressed strong support for the 10 year National Aboriginal and Torres Strait Islander Health Plan but gave no details of the funding it will get in the May budget and said there would be no policy direction change from “the key priorities of health, education, employment, economic empowerment”. He waxed lyrical about the power of enterprise and innovation in business and land use.

The big question is whether a softening in tone and a fulsome commitment to working in partnership with Aboriginal and Torres Strait Islander people could represent a game changer, particularly his statement that:

It is equally important we listen to Aboriginal and Torres Strait Islander people when they tell us what is working and what needs to change.  It’s our role as government to provide an environment that enables Indigenous leaders to develop local solutions….It is time for Governments to ‘do things with Aboriginal people, not do things to them’. 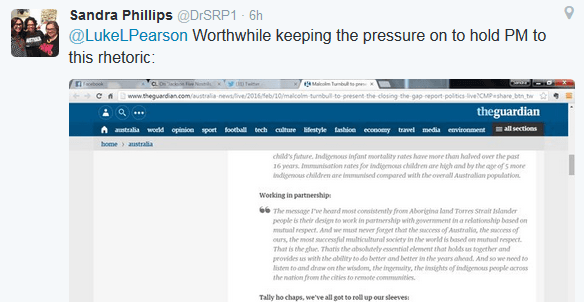 Aboriginal and Torres Strait Islander Social Justice Commissioner Mick Gooda says there is much goodwill still, but he said Indigenous people are “entitled to be a little bit cynical” until change really comes.

The speech in reply by Opposition Leader Bill Shorten also revealed a widening gap between the parties on Indigenous issues, with a commitment to:

He didn’t commit to the Australian Medical Association’s call for a reversal in funding cuts over the past three years but said: “You cannot cut your way to closing the gap.”

The Close the Gap Campaign‘s Close the Gap Progress and priorities report 2016, released ahead of the PM’s speech, has put the government on notice to apply the same accountability to itself on Closing the Gap as it applies to others, particularly Indigenous organisations and services.

It said the Government must allocate appropriate funding for the Health Plan in this year’s Budget, and increase health funds generally – critical given the National Partnership Agreement on Closing the Gap in Indigenous Health Outcomes actually expired in 2014 and funding was discontinued.

The committee says the government also must attend to the impact of the IAS on the social determinants of health by demonstrating “how it will contribute to achieving the close the gap targets”. It said:

“Funding of the Implementation Plan should be prioritised. We want to see core health service models and associated workforce and funding arrangements urgently developed, with particular focus on regions with relatively poor health and inadequate levels of service. Aboriginal Community Controlled Health Services should be the preferred model for investment as our own Aboriginal Health Services are best placed to deliver primary health care for Aboriginal and Torres Strait Islander peoples in all settings.”

The report also includes recommendations for:

Here are some of the reactions to today’s developments:

The expansion of Aboriginal controlled primary health services and programs, the reduction of racism in the health system and investment in the Aboriginal health implementation plan are all key to improving the health outcomes of Aboriginal people now and for future generations.

The recent Productivity Commission’s Report on the performance of the National Indigenous Reform Agreement has shown that investment in the mainstream organisations is not the answer.

The Public Health Association of Australia’s Vice President of Aboriginal and Torres Strait Islander Peoples Health Carmen Parter also called on the Government to set aside appropriate funding for the Implementation Plan in the 2016 Federal Budget,” said Ms Parter.

The Australian Medical Association (AMA) said it is encouraging that the number of Aboriginal and Torres Strait Islander Health Checks have increased, Indigenous peoples’ access to medicines has improved, and there have been improvements in infant and child health outcomes but the number of targets not on track were “a clear signal that we have to put politics aside”.

We accept it is the government’s right to set targets but we are not seeing the corresponding accountability for those targets not being met.

We welcome the fact that nationally the report is showing progress in some areas but it is not the experience we have in the remote Aboriginal communities in Cape York. While making good progress in infancy and early childhood through our award winning Baby One Program, overall life expectancy is certainly not on track.

Funding for Aboriginal health has been decimated in recent years and the government has indicated in recent months that there will again be significant cuts to health funding and this can only impact upon close the gap trajectories.

We have also seen increased bureaucracy with the introduction of the Health and Hospital Services and Primary Health Networks which means the Indigenous health dollar rarely reaches the services on the ground in remote communities.

Remote Aboriginal communities in Cape York are going to suffer if there is no funding reform, how are we expected to achieve outcomes with less or the same levels of funding and an increase in government red tape?

While both sides of government talk about respect and working closely with Aboriginal and Torres Strait Islander people and communities, this has not been felt at a service or community level even though this has been our approach for the past five years.”

“This is a generational challenge and we have to keep up the fight – particularly when the going gets tough. Government policy makers need to close the knowledge gap if they are serious about making lasting inroads to tackle disadvantage among Aboriginal people in Australia.” 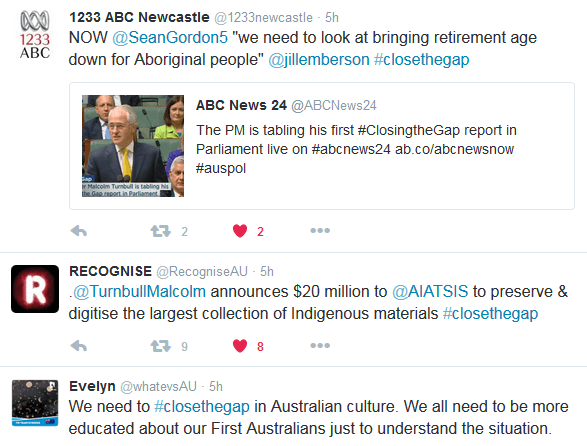 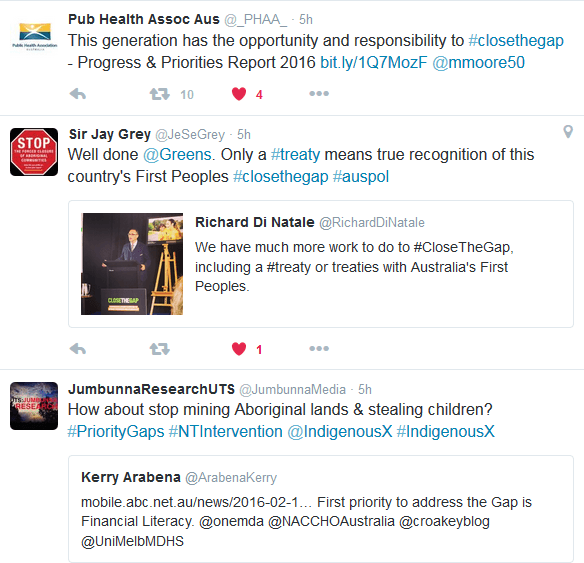 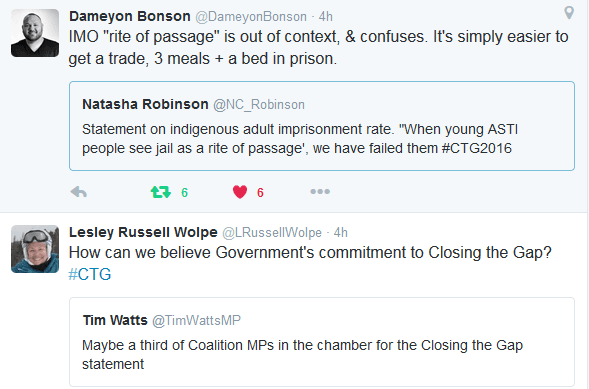 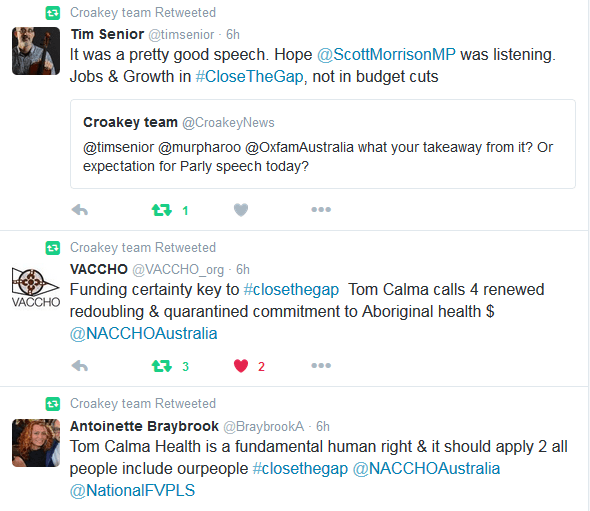 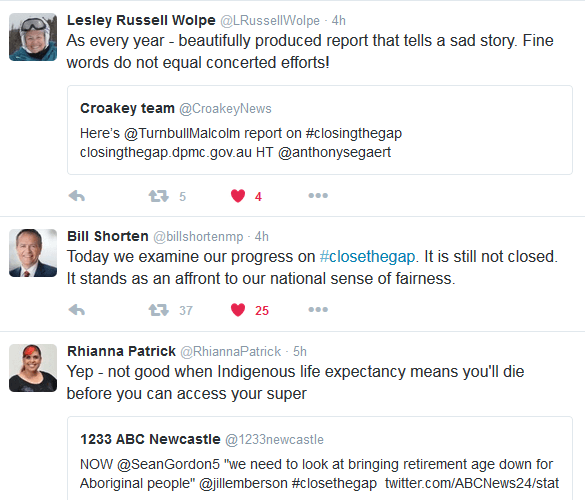 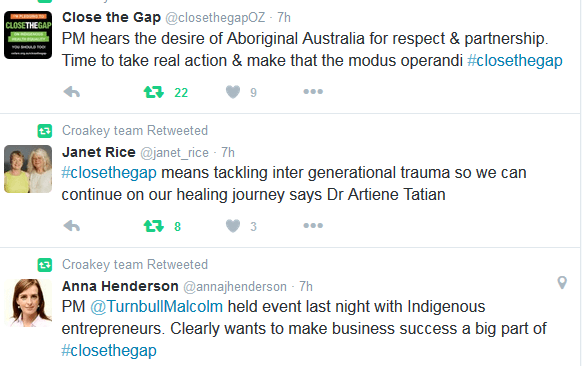