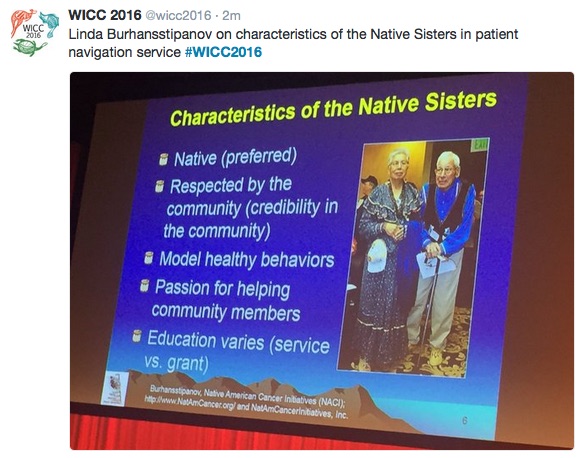 In Colorado and other states in the US, a community-driven initiative is helping American Indian cancer patients to navigate a complex and confusing health system.

The Native Sisters initiative arose out of a meeting some decades ago between Native American Cancer Research Corporation director Dr Linda Burhansstipanov and a renowned Harlem oncologist Dr Harold Freeman, who pioneered the patient navigation concept in 1990. 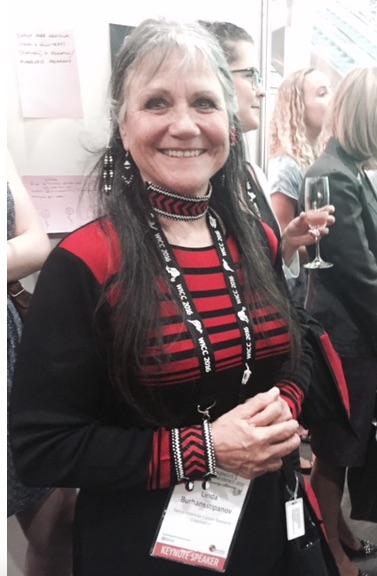 Burhansstipanov had come to health via work in family violence and HIV/AIDs, and was inspired by the concept of patient navigation that Freeman founded after despairing of how sick so many black Americans were before they sought medical care for cancer.

A Cherokee woman, Burhansstipanov decided to return to her community and to set up a not for profit American Indian community version of the concept, and the Native Sisters were born.

“They do everything,” she says after presenting on the model to the World Indigenous Cancer Conference. “Our navigators work through the whole continuum of cancer care.”

Unlike many other liaison officers, the Native Sisters “cross the threshold of the clinical setting,” and get patients signed up for screening, and follow up on tests. They speak on their behalf if they’re having symptoms that they don’t know how to explain.

The Native Sisters help schedule and maintain clinical appointments, sit in on doctor visits to translate or help pose or answer questions, and, often, guide clinical staff on spiritual and native language issues.

“Every barrier we have identified, we find the navigator is successful at overcoming in a very respectful way,” she said.

It’s a model that may hold promise in Australia, particularly in the wake of studies presented at the conference about the unmet needs of Indigenous cancer patients and the need for a bigger and more specialised Aboriginal health workforce.

Family violence advocates have similarly looked through the recent Royal Commission into Family Violence process in Victoria for the appointment of women’s advocates, to ‘walk alongside’ women through complex legal processes.

Burhansstipanov describes the case of one patient, who had become distressed while attending a health appointment. A Native Sister was called in and was able to find out that pictures of owls, used by the institution to show directions, was a symbol of death in her tribe. The Native Sister led her into the building by a back way.

For others, it’s about being a support to work through the mistrust many American Indians have of a medical system that abused them in the not so distant past: forced sterilisation, being lied to about what tests were being undertaken, and specimens shared without consent.

It can also be simply the use of language. Burhansstipanov says:

“For some of our people, to be told your cancer test is ‘positive’ means it’s positive news, that is, you don’t have it.

The navigator is there to ask questions on the patient’s behalf and to make sure the clinician is getting across the right information.

The end run for us is to see people get earlier and earlier diagnosis.

At the beginning we were primarily getting people in stage 3 and 4 of cancer, now the majority are zero, one and two. It’s because of the navigators.” 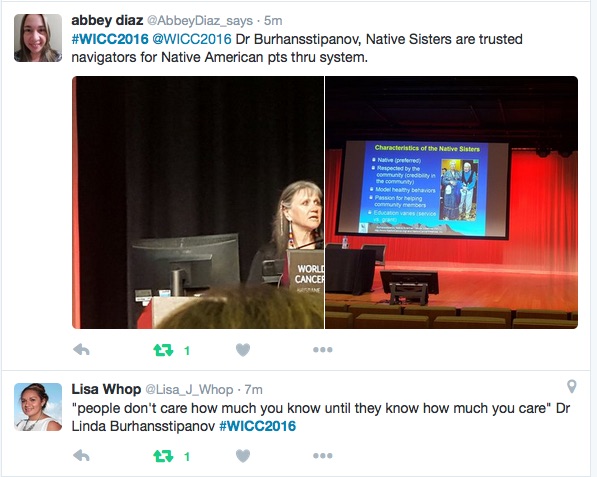 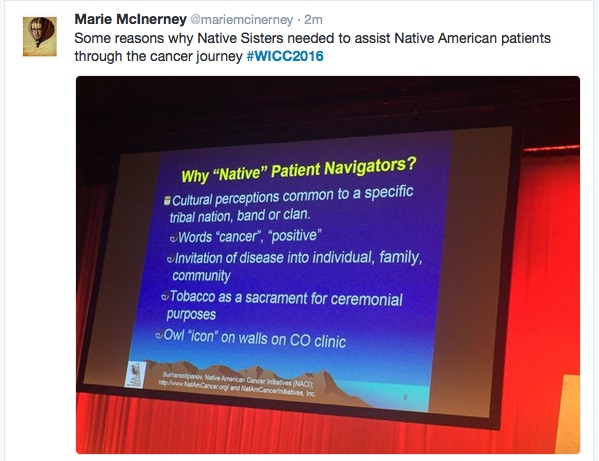 You can watch this video interview with Dr Linda Burhansstipanov:

Gaps in palliative care and support

Also speaking in the session, Professor Patsy Yates, President of Palliative Care Australia, said Burhansstipano’s work underscores how important it is to have an Indigenous health workforce in palliative care.

Reconciling that data suggested that Indigenous people either went into palliative care late or not at all, that they received more end of life care in acute health settings. “If they are having to end up in Emergency Departments then we have big issues to address,” she said.

The conference also heard latest progress on a number of investigations by the Menzies School of Health Research into unmet needs and quality of life issues for Indigenous cancer patients.

The most commonly reported moderate-to-high unmet needs ‘worrying about your illness spreading or getting worse’, ‘anxiety’ and ‘money worries’, including ‘finding a place to stay’ when having to travel, often far from home, for treatment.

Money worries, including for those who were not having to travel far, were also the main concern for patients in a cross-sectional study by Abbey Diaz, which investigated the association between comorbidity and supportive care needs among newly diagnosed Indigenous cancer patients in Queensland.

Given the concerns, she suggested there was an opportunity for tele-oncology, which could reduce costs on patients and the system, reduce social isolation and improve patient doctor communications, for those who lived too far or were too unwell to get to clinics.

Detailing further research into health-related quality of life among Indigenous Australians diagnosed with cancer, Associate Professor Gail Garvey of the Menzies said clinicians have increasingly recognised that while morbidity and mortality are important, more attention needs to be paid to the quality of life in a patient’s care, given the very significant impact on peoples’ lives, families, and work.

As part of a larger, longitudinal study, the research surveyed Indigenous cancer patients at four clinics in Queensland who were receiving treatment or were about to, and who were well enough to participate.