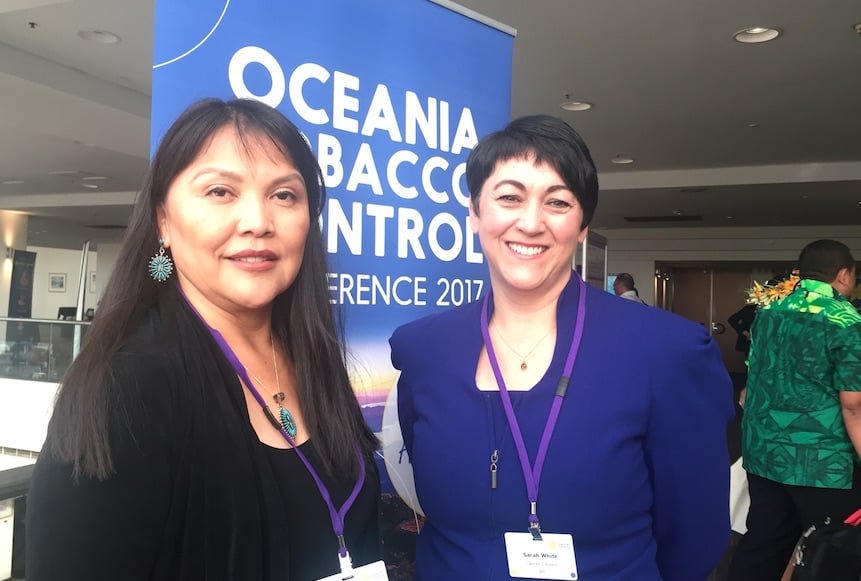 Dr Patricia Nez Henderson and Sarah White at the conference

Compelling stories from the fight for smoke-free American Indian communities

Traditional healers are at the front-line of efforts by Navajo researchers to prevent rising rates of smokers in American Indian communities while general population rates are trending down, the Oceania Tobacco Control Conference was told recently.

But tobacco control campaigners are up against formidable opponents: a brutal history that unleashed cigarettes into ceremonial use including as gifts following births and deaths, a tobacco industry that understands how to use tribal sovereignty to its advantage, and community fear that smoking bans will affect vital revenues from tribal casinos.

Navajo researcher Dr Patricia Nez Henderson told the Hobart conference that Team Navajo, a grassroots coalition she helped found a decade ago, had been campaigning since 2006 for the Navajo Nation to ban the use of commercial tobacco in all public spaces and workplaces.

The campaign focuses only on commercial tobacco, not the sacred tobacco – dzil not’ah or ‘mountain smoke’ – which is cultivated by communities and used for gift giving, medicinal purposes and traditional ceremonies, she emphasised.

Team Navajo has got close to a commercial tobacco ban four times, only to have the legislation vetoed or community support drop away out of fear that the Navajo people – the second biggest American Indian tribe, whose sovereign borders cross New Mexico, Arizona and Utah – would suffer economic loss with a smoke-free casino.

In the meantime, they’ve had a number of wins – not least enlisting the interest and support of traditional healers, but work on the ban has been “very, very frustrating,” she said.

Nez Henderson, who heads the Black Hills Center for American Indian Health in South Dakota, is the grand-daughter of two Navajo traditional healers and the first American Indian woman to graduate from Yale Medicine School. (See her profiled here in the Huffington Post’s Greatest Person of the Day feature).

Fifteen years ago, she published her first research paper, out of concern about rates of smoking among American Indian and Alaskan Natives.

“She said: ‘It’s wonderful that you’re publishing all this wonderful data, now what are you going to do for us?’

“She didn’t want just another ‘helicopter’ researcher coming in (and flying out),” Nez Henderson told the conference.

In response, Team Navajo has been working since to increase community involvement in tobacco control efforts, reduce smoking among Navajo people, and protect non-smokers from second-hand smoke.

It also has a fundamental cultural goal: to respect the role of sacred tobacco for ceremonial purposes, to “keep it sacred”.

While smoking prevalence has been declining within the general United States population, rates are rising among American Indian people, up from 37 per cent to 39 per cent between 2002-2005 and 2010-2013, according to latest figures from the US Centers for Disease Control and Prevention (CDC).

Nez Henderson said the rate is highly variable; in some communities it is low, in others it can hover around 50-60 per cent, for both men and women, and it is rising among the Navajo people.

Just as for Aboriginal and Torres Strait Islander people who were given tobacco as part of their ration packs, and for most other Indigenous peoples, she told the conference there is a brutal colonial story behind these figures.

In 1882, the US federal government prohibited American Indian tribes the right to practise their religious ways, including dances, ceremonies, gatherings, songs, prayers, and the use of ceremonial and cultural paraphernalia, including traditional tobacco.

The ban remained in force for nearly a century, stripping away culture and language and forcing American Indian people to incorporate commercial tobacco within their ceremonies, where it is now “ingrained”.

We have cigarettes in every stages of our lives.

When a baby is born, for example, cigarettes may be exchanged as a gift, all the way through to the death of a person, when there is a wake, you usually have baskets of cigarettes given away as gifts to those who are paying their last respects.”

So it’s been a challenge, as you can imagine, trying to educate our people about commercial tobacco.

And how do we do it in a way that is respectful to our elders, to our traditional healers?”

“Preying on our culture”

The Navajo nation and more than 550 other federally recognised tribes are exempt from state tobacco control laws introduced to ban smoking in public areas in many jurisdictions, so separate laws are required on sovereign lands.

She blames the tobacco and gaming industries for “preying on our culture” and on promoting fears of continuing economic disadvantage to prevent those laws being introduced. 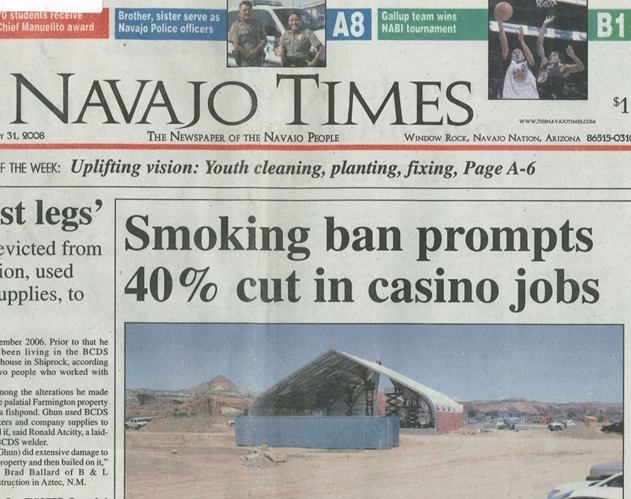 “A lot of tribes have done very well with casinos, however many still allow smoking so the workers and patrons are exposed to second hand smoke,” she said. “Initially the revenue will drop when they go smoke-free but it will go back up, the evidence shows that.”

Nez Henderson says she has dug into historic documents from the tobacco industry that show it understood the implications and opportunities around sovereignty “probably better than anybody else”, as well as the importance of sacred tobacco.

According to the CDC, tobacco companies “target” American Indian and Alaska Native communities through extensive promotions, sponsorships and advertising campaigns, including product packaging and names.

“For example,” it says, “the American Spirit™ cigarettes were promoted as “natural” cigarettes, and their packaging featured an American Indian smoking a pipe,” it said.

That’s now unfortunately been taken up, Nez Henderson said, by some tribes that are manufacturing their own cigarettes, using very evocative images. 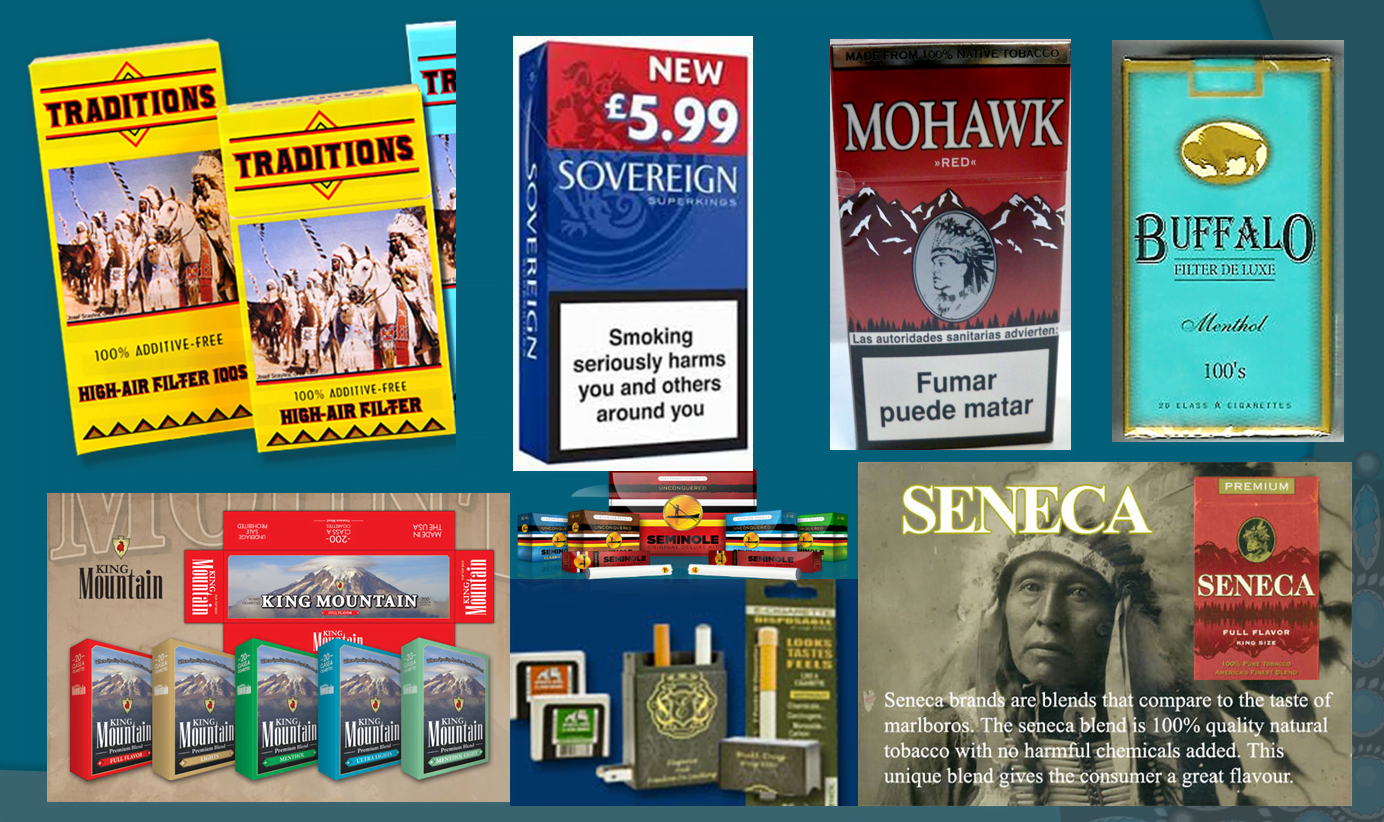 Stories of harm and healing

Faced with continued resistance to a public commercial smoking ban, Nez Henderson said she put on her research hat, to try to investigate why elected leaders were not listening to people at the local level and what the health coalition could do to gain traction. 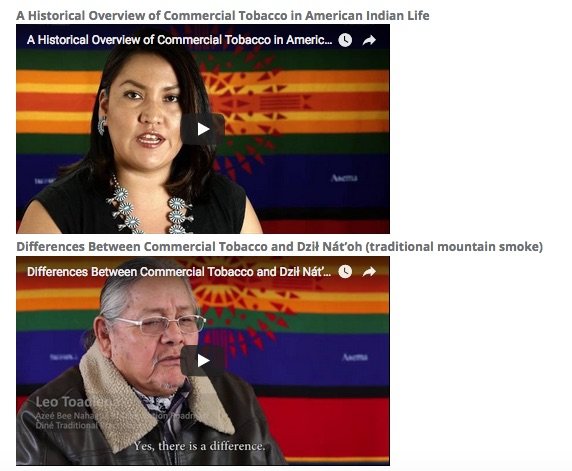 She said it’s thought to be the first such American Indian project, and taught the researchers and advocates valuable lessons in how to partner in culturally respectful ways.

Telling stories in this way, she said:

The team has also gathered the stories of American Indian people who have been harmed by commercial tobacco products, including Nathan, a member of the Oglala Sioux tribe, who never smoked but worked for 11 years at a casino that allowed smoking. He died at age 54 of illnesses caused by secondhand smoke exposure.

And the campaign for a Navajo Nation ban is set to resume, with a new grant secured to get Team Navajo “up and going again” plus recognition of the need to “build relationships with tribal leaders and casino management in order to develop the business case that will take comprehensive smoke-free policies to scale throughout tribal lands”.

The team is currently polling the elected leaders and community members, to gauge their enthusiasm this time around, particularly given the Navajo nation in the meantime became the first American Indian nation to impose a “junk food tax“.

An interview with Dr Patricia Nez Henderson at the conference 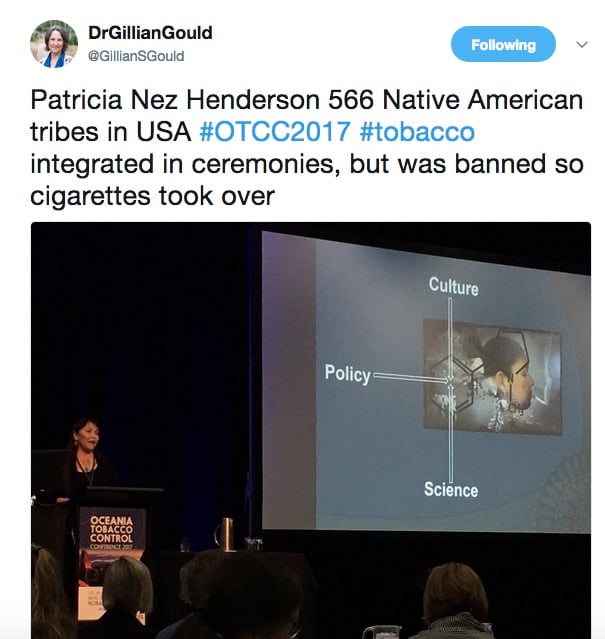 • Bookmark this link to follow our coverage of #OTCC2017. And flashback to Marie McInerney’s reports from #OTCC15. Download the full conference report here from the Oceania Tobacco Free Conference, held in Perth with the theme, “let’s make smoking history”.