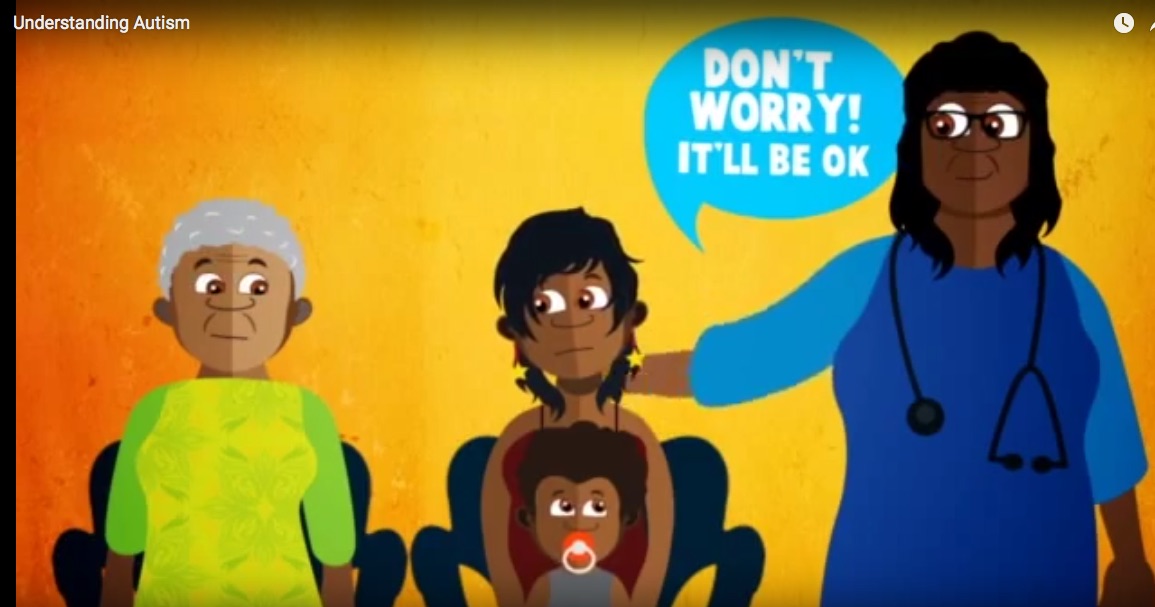 In this report from the recent Aboriginal Health and Medical Research Council of NSW conference in Sydney, journalist Marie McInerney details efforts to improve the care of Aboriginal people with chronic pain and children with autism.

This is her final report from #AHMRC16 for the Croakey Conference News Service.

Many Aboriginal people with chronic pain do not receive effective care; however, efforts are underway in NSW to improve access to effective, culturally appropriate help.

The focus is also on reducing the need for people to travel long distances to metropolitan centres.

As the conference heard, developing more accessible, appropriate services requires an understanding of the current barriers to care.

Some of these are detailed in the slide below, presented at the conference by Aboriginal Health Education Officer Ellis Bradshaw, from the Lismore Base Hospital in northern NSW. 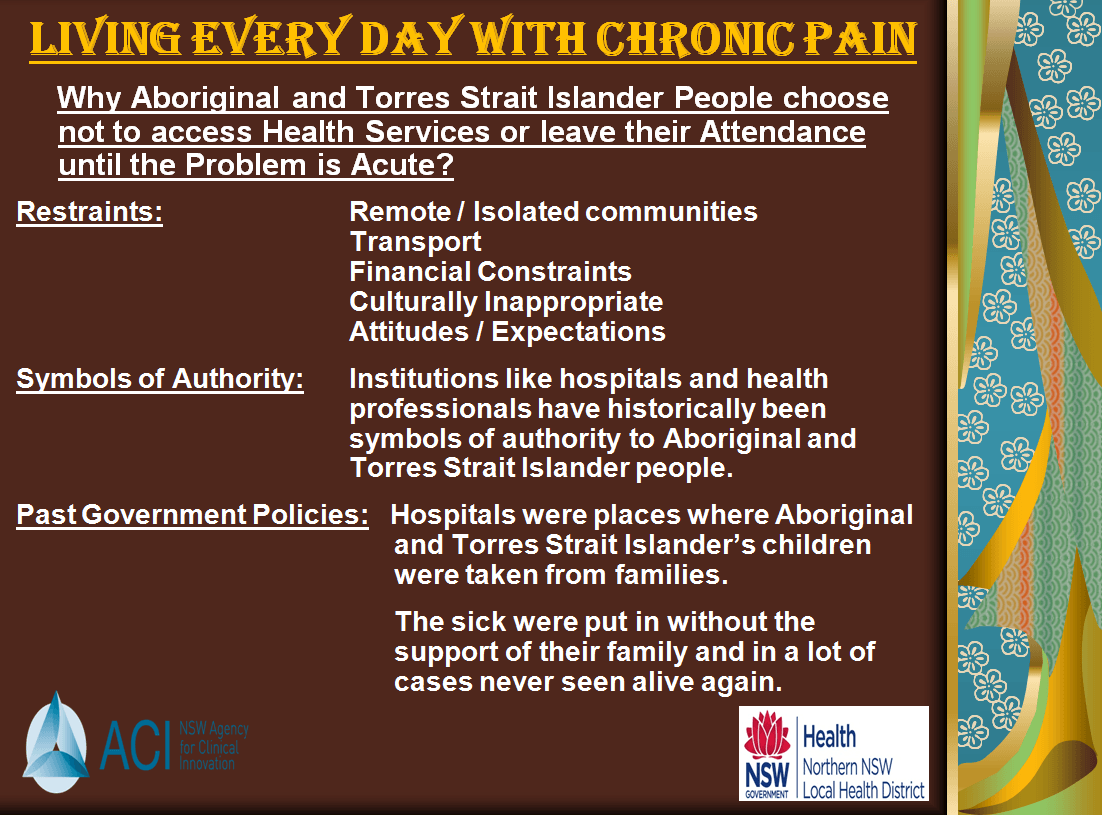 He described workshops being run by Lismore Aboriginal Health – Gurgun Bulahnggelah – as part of a growing effort in the state to address high levels of often un-managed chronic pain in Aboriginal communities.

The session was run by New South Wales Health’s Pain Management Network, which is looking to partner with Aboriginal health organisations and programs, like that run by Bradshaw in Lismore, by providing training and resources that Aboriginal health workers can take away and tailor in language, style and content for their communities.

It’s hoping also to develop culturally appropriate and relevant resources like the video below on managing back pain. It was produced by the Western Australian Centre for Rural Health, in association with Curtin University and the Geraldton Regional Aboriginal Medical Service.

This figure rises to one in three people for Aboriginal and Torres Strait Islander people – the same rate experienced by non-Indigenous Australians aged over age 65 years.

There is also over-representation of Aboriginal and Torres Strait Islander people in use of opioids for pain management, Nicholas said – making up one in ten of those on opioid programs.

The Network believes that this over-representation is for similar reasons that opioid use is so high generally in rural and regional areas (up to ten times the level of prescribing compared to metropolitan areas).

“A lack of alternative options is the main reason,” Nicholas told Croakey after the conference. “That’s why we’re trying to push access to broader pain services in more remote areas.”

When the Pain Management Network was set up in 2012, NSW had 11 pain clinics, all along the east coast, and only three in rural or regional areas.

There are now 19, with more on the way, and with tele-services extending the reach into regional areas.

The Network is now seeking to partner with more Aboriginal health services and communities, and has worked to date with organisations on the north coast, Redfern, Moree, Broken Hill and the south coast.

Pain is not a separate health entity for many Aboriginal people, according to Pain Management Network Manager Jenni Johnson.

“It’s part of a broader social, emotional and historical context and interwoven with Country and way of life,” she says.

Grief and loss are linked heavily with pain, including loss of culture, language, land and identity. Pain can result in shame and isolation.

There’s also, as Bradshaw’s slide noted, mistrust of the health system when seeking help for pain, and mistrust or misunderstanding about the role of medications.

“Key messages about pain need to be simple – they need to be delivered in the context of story telling and shared experience to have meaning,” she said.

In the main, she said, the program has learnt that clinic environments are not suitable. Nor is a “fly in and fly out” approach from specialists.

Communities need a long-term commitment, and learn better from community leaders, with the support of an expert pain clinic. 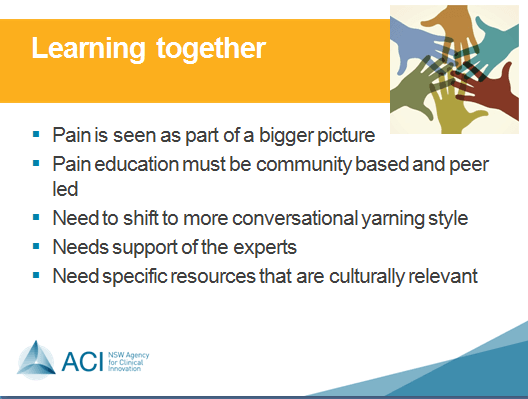 Nicholas said the reason pain clinics were so centred on metropolitan regions is that they require a multidisciplinary team.

“In country towns, you might have a GP and a nurse, but not a physio or psychologist. You can find ways to fill those roles as much as possible from the people who are available, but they need training.”

Thus the Network is seeking to develop, in collaboration with the AH&MRC and through Aboriginal community controlled health organisations, ways of running pain programs in communities, “so they don’t have to face coming down to Sydney or going to one of the big centres where experience has been that they don’t want to do that,” he said.

Under the proposed program, Aboriginal health workers would be trained in pain management skills and approaches, which they can then translate as they see best for their communities.

“At the moment, Aboriginal people are not accessing available services as much as their numbers suggest they should, in which case we’ve got a delivery problem,” he said.

The objective is to have pain services “that are accessible to people across the state at a reasonably consistent level so it shouldn’t matter where you live or what you earn as to what services you get, it will depend more on your need,” he said.

“We obviously can’t have a big pain clinic in every town, but there’s no need: we can project tele-services and engage local services.

“They don’t have to be hospital-based, we’re actually trying to demedicalise (pain management), to show there are non-drug alternatives.” 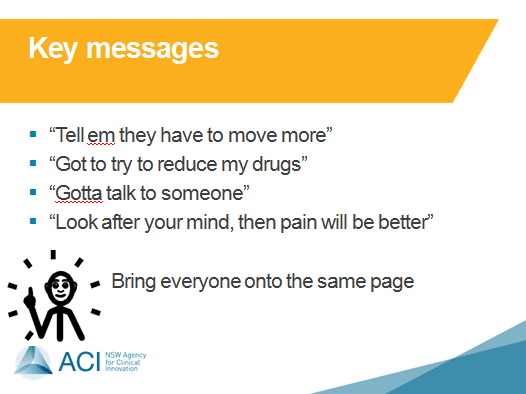 Beyond the international stage

Yvonne O’Neill has played rugby league on the international stage for Australia and has artwork on display in the Vatican.

But her passion now is to spread the word in Indigenous health services and communities about the need for early diagnosis and management of autism spectrum disorder (ASD) so the next generation of Aboriginal and Torres Strait Islander children can achieve their ambitions.

“I’ve been very fortunate,” she says, “but I want them to do better.”

For that to happen, she says mainstream health services will have to start looking at children with ASD with fresh eyes, to avoid stereotypes and to allay family fears that they are ‘naughty kids’ who may be taken away by authorities if behaviour issues are reported.

O’Neill is an Aboriginal woman from Goodooga in NSW. Her mum is an Yuwaalaraay/Kamilaroi woman and her dad, well-known Indigenous artist Tex Skuthorpe, is a Noonghaburra man.

In 1995, she became the first ever Indigenous woman selected for the Australian Women’s Rugby League team. She continued to play at the international level for ten years, and helped found the Indigenous All Stars women’s rugby league side.

It was while working as head of Indigenous education at St Joseph’s Nudgee College, a Catholic boarding school for boys in Brisbane, that she finally followed her father’s calling and picked up a paintbrush.

In 2010, she was commissioned to paint a 2.1 metre wooden cross for the thanksgiving ceremony in Rome that marked the sainthood of Australian nun Mary McKillop. Another commission for the Vatican followed, and her canvas painting depicting a dreamtime story now hangs in the Vatican Museum.

Now she is one of three Early Intervention Indigenous Liaison Officers based at Autism Queensland, and is charged with raising awareness nationally about the prevalence of autism in Aboriginal and Torres Strait Islander communities and the benefits of early intervention for children aged 0-7.

O’Neill and her colleagues were recently also given responsibility for promoting awareness around a range of other disabilities, including Down syndrome and cerebral palsy, in the lead up to the roll-out of the National Disability Insurance Scheme (NDIS).

In many communities, she said, there’s a tendency, particularly among non-Indigenous services, to assume that a child presenting with developmental issues has whatever is prevalent in the community, whether it’s foetal alcohol spectrum disorder (FASD) or attention deficit disorder.

“People need to start looking at Aboriginal and Torres Strait Islander kids with fresh eyes, when they walk into a surgery or health service, so they’re getting a fresh evaluation every time they go there, rather than being stereotyped,” she said.

While Indigenous patients generally are at risk of being stereotyped by health services, she says the stakes are higher when it comes to children, given the benefits that can flow from early intervention for a range of illnesses and disabilities, including autism.

To foster awareness, the team has created this film below, Understanding Autism. It follows the journey of an Indigenous boy called Ned through the process of diagnosis.

Other resources, including picture books, about autism for Aboriginal and Torres Strait Islander children and families can be found here.

When it comes to ASD, O’Neill says the key is to give families and service providers in Aboriginal communities the right tools, language and information to be able to go to their GP or paediatrician to “get the right diagnosis and not be scared of the process”.

“If all anyone in the community tells you is that your child is naughty, always mucking up, and no-one has any alternative diagnosis because ASD is not even on the radar, the kid gets labelled,” she said.

“The more we can reach into communities, building awareness and capacity, the more that service providers who are there on the ground can help families to navigate that system in a safe and culturally appropriate way.

“If they have the diagnosis, then they can have the proper care plan, so they can be set up on a successful pathway, not be disadvantaged from the get go. Otherwise we are setting them up to fail.”

• Marie McInerney covered the #AHMRC16 conference for the Croakey Conference News Service. Bookmark this link for the coverage.

Below are the Twitter analytics from #AHMRC16, and you can also read the Twitter transcript. Thanks to all tweeters! 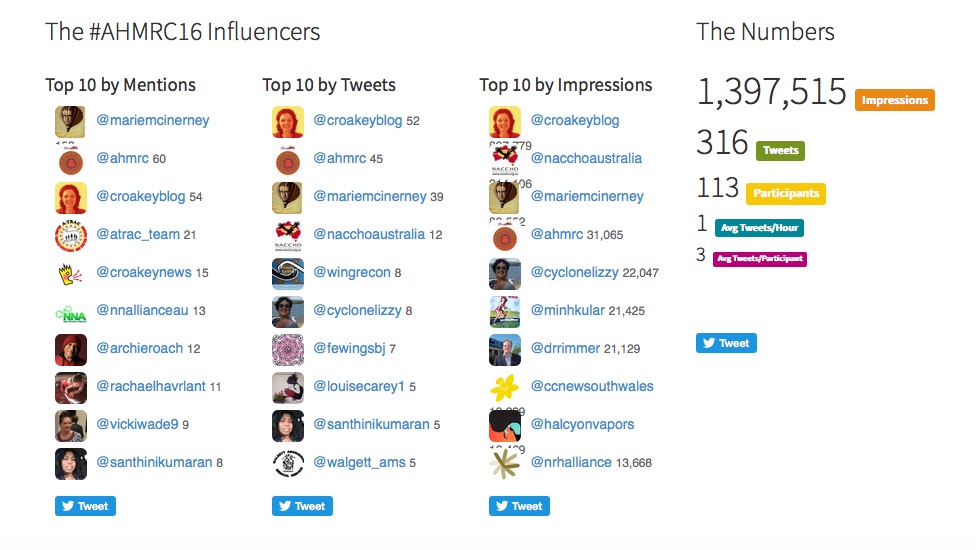