Home Croakey projects #JusticeCOVID Could the pandemic open the doors to prison reform? 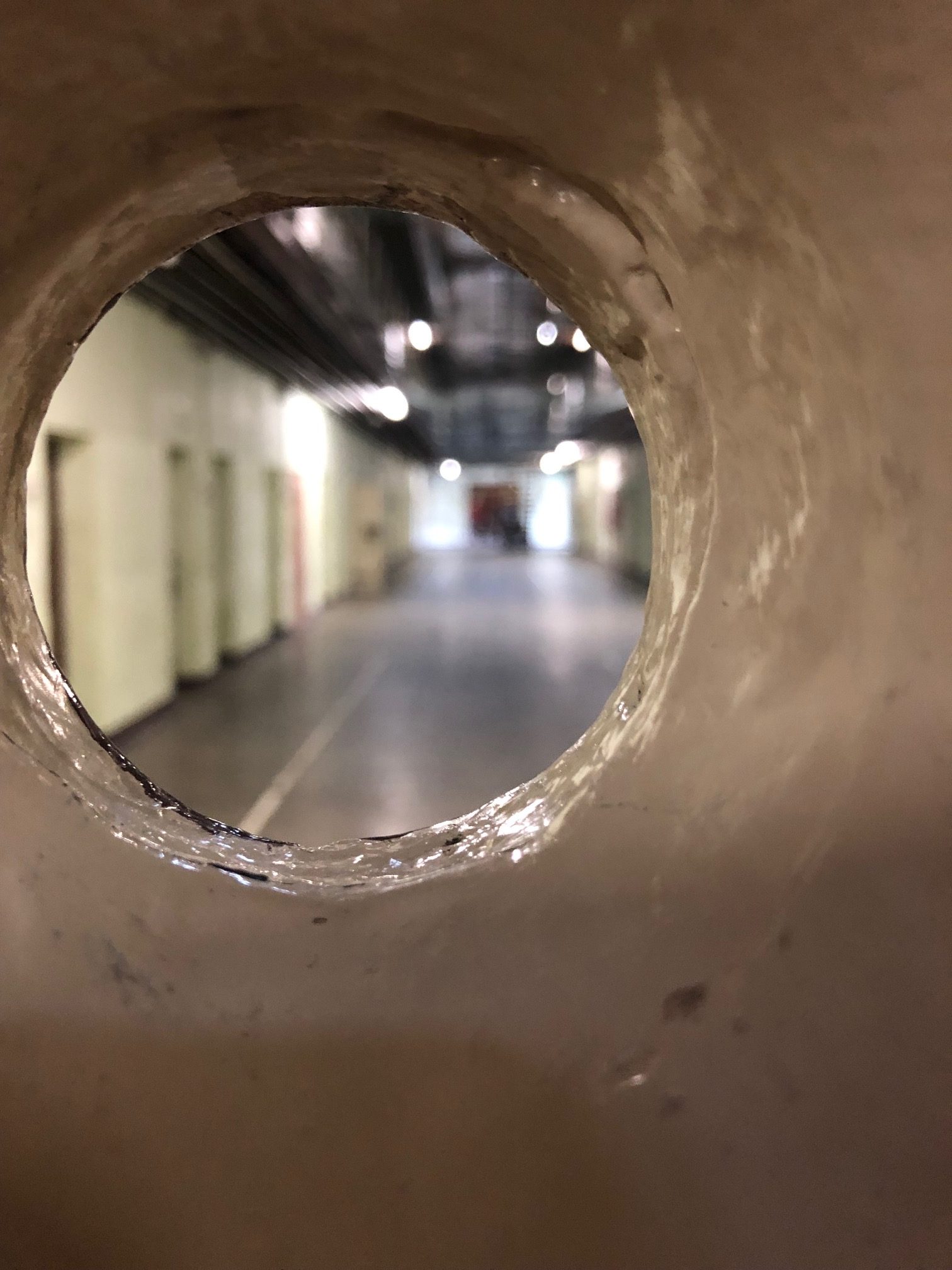 Could the pandemic open the doors to prison reform?

Around the world, COVID-19 has raised deep anxieties about the welfare of prisoners, but it is also leading to hope that emerging from the pandemic to a “new normal” might bring long-overdue, meaningful prison reform.

In Darwin, lawyer David Woodroffe is used to seeing prisons packed with disproportionately high numbers of Aboriginal people, many on remand because they have been refused bail, serving time often because of traffic offences and failure to pay fines, and suffering a range of chronic health issues.

As the Principal Legal Officer with the North Australian Aboriginal Justice Agency (NAAJA), he has been on tenterhooks for the past few months, amid grave concerns that Australia’s prisons will be hot spots for transmission of the novel coronavirus, as has happened in the United States.

“There’s the risk of real catastrophe, in the loss of Aboriginal lives, and the effect that would have on communities, families, and children,” he told Croakey.

But Woodroffe, who is chair of the Winkiku Rrumbangi NT Indigenous Lawyers, says the pandemic has also given him a glimpse of what justice systems might look like if the health, welfare and safety of Aboriginal people in corrections was more of a priority.

While no Australian prisons have released large numbers of prisoners, as has happened in Iran or Ireland, Woodroffe estimates that numbers of Aboriginal prisoners at the Darwin Correctional Centre have been cut by about 130 (possibly 10-15 per cent) as authorities have sought to reduce overcrowding to limit the risk and impact of a possible outbreak.

That’s been achieved in a number of ways, he says.

One has been better access to bail – something that is often denied to Aboriginal and Torres Strait Islander people, who are 11 times more likely than non-Indigenous Australians to be held in prison on remand awaiting trial or sentence.

There’s also, he said, been a more concerted effort to make sure that people have been able to get home safely when they’ve left prison or youth detention, to avoid them becoming homeless or stranded, he said. That’s often tricky for those returning home on Country, having to navigate distances of thousands of kilometres, but particularly when remote communities are in lockdown.

And the threat of the coronavirus entering remote communities led to another benefit, he says. Mainstream health and social services, including bush courts, “withdrew” from many places during lockdowns, providing the opportunity for local communities to step up and find their own ways of keeping themselves safe and well.

“Why shouldn’t this be the new normal?” Woodroffe asks.

Keep children out of custody

A similar question is being asked thousands of kilometres south, where the Victorian Commission for Children and Young People is urging courts and justice departments to continue their efforts begun during the pandemic to reduce numbers in youth detention.

Commissioner Liana Buchanan told Croakey that management of the pandemic has been posing unique risks in a secure setting like youth justice – not just the risk of a devastating outbreak but also issues like use of solitary confinement as a means to reduce transmission.

She said her greatest fear so far has been that any COVID-19 case in a youth facility would lead to all children and young people being in effective solitary confinement for extended periods.

“That would be devastating,” she said of the mental health impacts outlined by her office in a 2017 report that found most children and young people in youth justice centres have a history of trauma or disadvantage and faced “significant neurological and emotional harms” from isolation, separation and lockdowns.

Although they don’t yet have exact figures on lower rates of detention through the pandemic, Buchanan and her colleague Justin Mohamed, Victoria’s Commissioner for Aboriginal Children and Young People, have observed greater efforts by authorities to prepare young people for bail and parole and to keep them informed and engaged in activities in detention.

Those greater efforts include Youth Justice putting extra resources into case management to support children getting bail, an approach that “should of course be the norm”, Buchanan said.

Reduced numbers have also resulted from less ‘offending’ by young people in the community during lockdown and an apparent shift in the exercise of magistrates’ discretion, she said.

“These efforts to keep children out of custody, and to better support those in custody, should not only be applied during a pandemic, they should set the new benchmark from which we should be aiming to improve further,” she said.

Just as Australia’s overall COVID-19 numbers are among the lowest in the world, so too is the infection rate in our prisons. To date, only been a handful of cases have been reported among guards or support service staff, and none confirmed among prisoners.

That compares to the devastating outbreaks seen in the US where, as at June 2, according to tracking by the Marshall Project, more than 40,000 prisoners have tested positive for COVID-19 and at least 495 have died.

Australia’s success has come with costs for prisoners and youth detainees.

These include a stop on face to face visits from family and friends, and lawyers and support services were unable to go inside. Education has been disrupted, and new arrivals to prison and juvenile justice have had to go into mandatory 14-day isolation in some jurisdictions, a big worry for those who may be experiencing great anxiety and/or managing withdrawal from drugs.

Justice watchdogs told Croakey they have worried about such costs but said they have had to be balanced to a degree by the success so far in keeping the coronavirus out of prisons. “The stakes are high,” said Western Australian Inspector of Custodial Services Eamon Ryan.

While advocates have raised many concerns for prisoners and young people in detention under the pandemic restrictions, Ryan told Croakey his office has received “mixed feedback” from prisoners, staff, families and support services and staff.

Many, he says, have welcomed the long-urged expansion of ‘digital visits’ via skype or other video links, which has given some inmates the first chance in years to see their homes and pets and children playing in backyards.

“If there is any good to come of this situation, it is this initiative,” he said, adding this office had been also told that the atmosphere in many facilities “is more calm because of a reduction in contraband entering and the flow-on impact of that within prisons”.

Now some of those restrictions are lifting around the country but, like David Woodroffe,  Olga Havnen believes “business as usual” is the last thing that prisoners need.

Her worries are not only about a second wave of coronavirus, but third or fourth waves, an ongoing threat of coronavirus infection that also means constant lockdowns and risks of damaging solitary confinement.

“It could go potentially for years,” says Havnen, who is CEO of the Danila Dilba Health Service, which provides youth outreach into the Don Dale juvenile detention centres in Darwin, as well as community controlled health services across Darwin.

Earlier this month Haven welcomed a High Court decision which found the tear-gassing of four teenagers at Don Dale in 2014 was unlawful.

It was one of many shocking abuses at the facility that led to the Royal Commission into juvenile detention in the Northern Territory.

Havnen said it was “completely and utterly obscene”, and further proof that prison or detention should be a place of last resort for Aboriginal and Torres Strait Islander people – as urged by the Royal Commission into Aboriginal Deaths in Custody 30 years ago and multiple other reports since.

With the pandemic now adding to that threat, Havnen and other advocates are urging the release of low-risk prisoners from prisons and youth detention: the many who are sentenced for traffic offences or non-payment of fines, those with chronic health conditions or on remand, the elderly, the young, women with children in their care.

“For Christ’s sake, get people out,” Havnen said, urging prisons to act now, before an outbreak happens and while we have a respite.

If this release does not happen, she worries that if an outbreak occurs, authorities will either lock down all prisoners or launch a large scale release without adequate supports for those released.

Havnen said there had been talk in Darwin early in the pandemic about setting up low cost accommodation options for people exiting prisons in an outbreak, and for those who live rough.

“But now that things have eased up a bit, I’m not sure the impetus and appetite is still there for that,” she said.

“There is not much point opening the doors of a prison and turfing them out on the street.”

The risks and lack of support in the transition from custody to community is one of the biggest issues that prisoners and young people face and has long been a worry for Melbourne women’s prisoner support group Flat Out, especially in the pandemic.

Executive Officer Elisa Buggy says it’s hard to be hypercritical of prison authorities at the moment, given how effective facilities have been at preventing an outbreak.

“But that doesn’t detract from how terrifying it must have been to be in prison”, particularly in the early days when the threats for prisons were emerging and lockdowns beginning.

Equally hard, she said, has been the experience of many women released during the pandemic from prison back into the broader community, where they were subject to heavy police surveillance.

She doesn’t have access to numbers yet of the number of women who cycled back into prison during the pandemic, but said Flat Out’s referral rates “climbed exponentially”.

“Coming out of prison into a pandemic, where if you don’t have access to housing immediately, and it’s not stable and safe, you’re going to be walking the streets,” she said.

“If so, you’re very susceptible to being picked up by police, a $1,600 fine slapped on you, police checking whether you’re breaching bail conditions, and you’re back in the system again before you can blink.”

Asked what she would like to see happen, Buggy says it’s no secret that Flat Out is an organisation that advocates prison abolition. “It would be great to see this level of social and societal disruption also have a positive impact on reducing the number of people in prison,” she said.

Flat Out is not alone in calling for dramatic cuts to prisoner numbers in Australia.

The Law Council of Australia wrote in March to Attorney General Christian Porter, saying Australian courts had already begun to factor in to bail decisions the risks to people coming before them of both COVID-19 and disruptions from the pandemic that have clogged up legal processes.

Weeks before the Black Lives Matter protests exploded across the globe, the families of Aboriginal and Torres Strait Islander people who have died in custody issued an urgent letter to police, prisons and governments, saying they “fear that a Black COVID-19 death in custody is only a matter of time”.

Even if we don’t have another coronavirus wave, David Woodroffe can’t bear the thought of going back to normal in the NT, “if normal is that the bars and coffee shops are open, and our courts and prisons fill up once more, with another generation of Aboriginal people lost to the justice system”.

“This is a pivotal opportunity to change the way the justice system operates,” he says.

This article was supported by the Judith Neilson Institute for Journalism and Ideas.