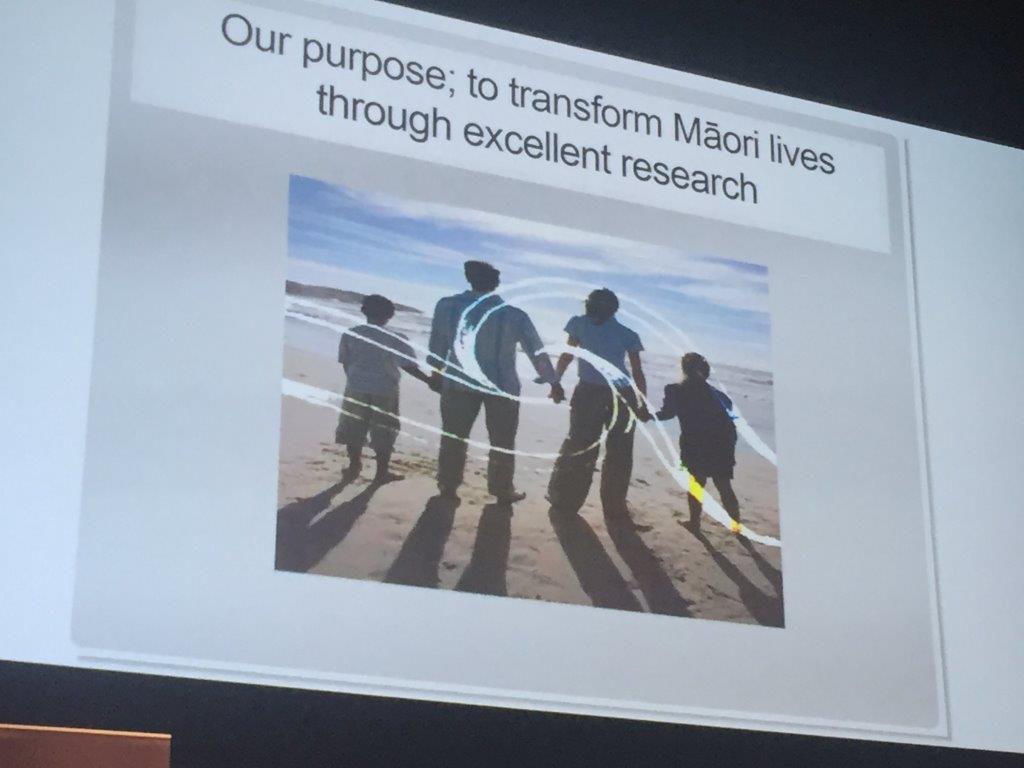 This slide was shown in the session, Reclaiming and transforming research and practice: three Indigenous case studies from Aotearoa

Courage, honesty, celebration and imagination – and other ethics for Indigenous health research

Research ethics was, not surprisingly, a major theme at the Lowitja Institute International Indigenous Health and Wellbeing Conference 2016, held recently in Melbourne.

Below is the first in a series of three articles on research ethics, arising from the conference.

One of the biggest impacts of colonisation has been to destroy and denigrate Indigenous knowledge systems and intellectual traditions across the globe, according to leading Maori constitutional lawyer and Treaty of Waitangi expert Moana Jackson.

Speaking at the Lowitja Institute International Indigenous Health and Wellbeing Conference 2016 last week, Jackson warned this threat is not over and that an unethical research approach to Indigenous peoples can in itself be “a colonising act of dispossession”.

In his keynote address, he outlined 10 ethics that he believes should underpin any research into and about Indigenous peoples. See them listed below.

His address in Melbourne focused on the themes of #LowitjaConf2016 – Identity, Knowledge, Strength – and the insights of his beloved mokopuna (grand-daughter) who, with the wisdom of an eight-year-old, observed: “it’s not what you learn, it’s how you learn”.

One New Zealand research organisation detailed how its research was located, physically and metaphorically, in the tribal meeting place. Any tricky or important discussions would be held there. “That’s the way we ground who we are and what we do,” said Heather Gifford from Whakauae Research in Whanganui.

Others detailed the risks of being co-opted, often without power, influence or proper funding, to “authenticate” non-Indigenous led research or of being expected to be the holders of knowledge on “all things Indigenous”. See more below.

Of Ngāti Kahungunu and Ngāti Porou descent, Jackson is Director of Nga Kaiwhakamarama I Nga Ture (the Māori Legal Service), a former Director of the Maori Law Commission and played a key role in developing the UN Declaration on the Rights of Indigenous Peoples.

In his Lowitja keynote, he talked about the question of knowledge, how every people on the planet developed their own “acute and astute intellectual tradition”, with a search for knowledge that is culturally determined and shaped by the land on which they live, which “in turn shapes their history, their relationships, the ways they see the world”.

“Among the many brutal, damaging things that colonisation has done to Indigenous people has been to convince them there is indeed only one way of seeing the world, only one system of knowledge,” he said, adding that any belated recognition of an Indigenous intellectual sees “a certain quaint exotic interest” but in no way universality.

He sees one of the coarsest examples of that destruction in the renaming of places of meaning for Indigenous people, as a form of graffiti, such as the small island of Waikawa or “bitter water”, renamed prosaically by Captain Cook as Portland Island.

In the same destructive way, he said, colonisers replaced the “deeply individual but inherently collective identification of place” with ways of defining Indigenousness that suited them, with the “mythology of the blood quantum”, that a person’s identity is determined by how much Maori, Cree, Aboriginal or other Indigenous blood they may have.

“That not only disrupted our understanding of what it means to be us, it’s also caused and continues to cause immeasurable heartache and pain to Indigenous people. It leads to often hurtful comments: ‘you can’t be a real Maori, you can’t be a real Aboriginal, you’re too white, as if that is the determinant of what makes us uniquely Indigenous,” he said.

Echoing the concerns of many presenters at the conference, Jackson said the Western intellectual tradition and its research methodology came with the presumption that colonisers could research anything and anyone they wanted, that they could “research, deconstruct, displace and replace Indigenous knowledge systems.”

Describing academic freedom as a social construct, he said there remains a conviction that non-Indigenous people have some automatic right to research what they wish and a resistance to understanding that Indigenous people are most capable of researching Indigenous issues or that different knowledges count.

He said that in many Indigenous knowledge systems, written literature is only recent, but the knowledge exists in the poetry, songs, history and traditions of the people.

“Yet to try to get a university to accept that that way of knowing and seeing the world constitutes a valid literature review is one of those many struggles that Indigenous researchers and people continue to wage,” he said.

Here are summaries of his 10 ethics for research into and about Indigenous people:

Jackson ran out of time to fully explore the final point, but you can watch him discuss the 10 ethics in a video in this Fala Media post.

Research as a tool for transformation

In other sessions at the conference, delegates heard a range of presentations building on Lowitja Institute patron Dr Lowitja O’Donoghue’s call to always question the point of research: Whose interests does it serve? Who will benefit? Who is asking the research questions? What are the drivers of the research? And who is at the steering wheel? 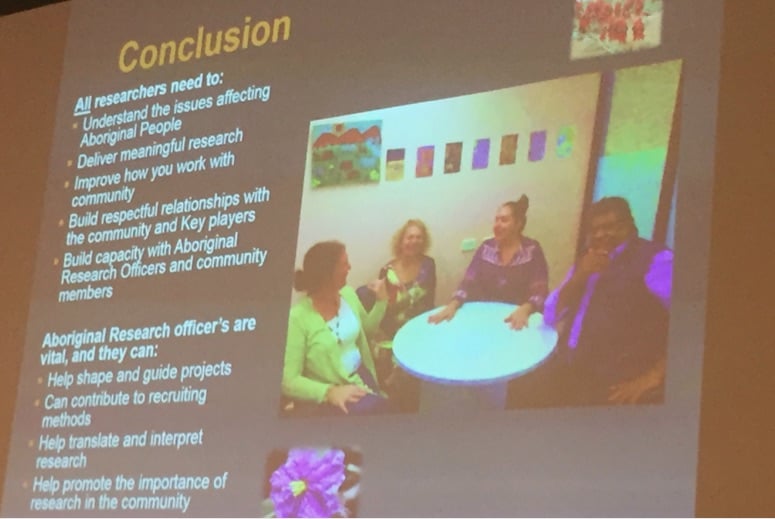 Our Men Our Healing

The conference heard of impressive results from the Our Men Our Healing co-design project run by three Healing Foundation projects conducted in the Northern Territory which allowed men to see themselves as nurturers, teachers and protectors.

Researcher Steven Torres-Carne quoted women in the communities as saying they remembered the day the men began the program. “(They said): we remember that day as the day they started their healing program.” 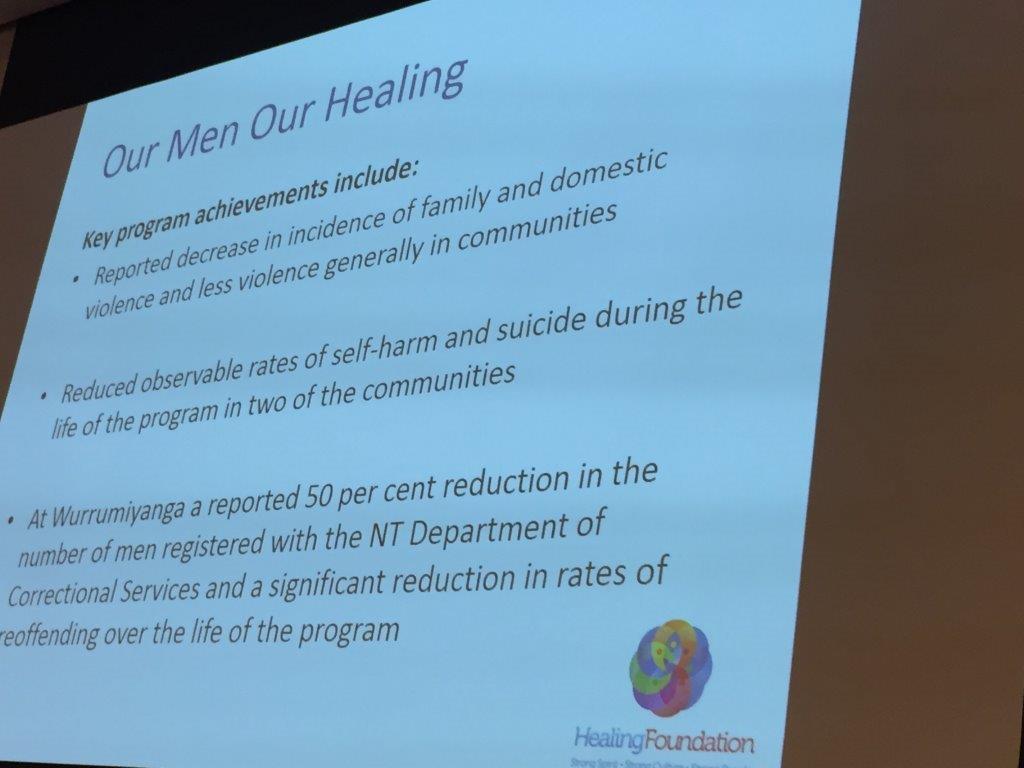 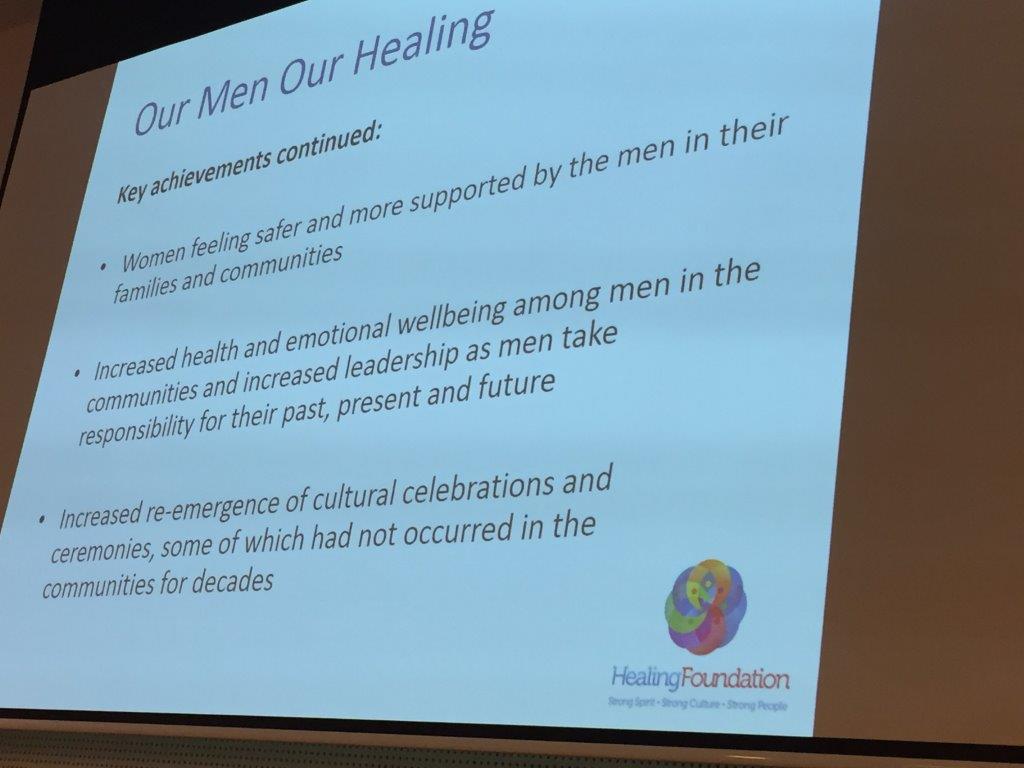 Reclaiming and transforming research and practice

A session on three Indigenous case studies from Aotearoa/New Zealand reported a real awakening of Indigenous-led research in recent years, with a focus on it being “a tool for transformation…that actually has to make a difference for services on the ground.”

Presenters talked about how multiple accountability is a big issue for Maori health researchers, being accountable to funders, academic leaders, and to their own tribe and Maori communities more broadly, with additional responsibility to nurture the next generation of researchers and strengthen their own cultural competency. Another constant question was how to engage with community with integrity: not to be expedient, nor convenient.

Denise Wilson from the Auckland University of Technology said her team ran workshops to support young Maori students so they are not pushed into Western ways, and now refused to act just as advisors to projects.

“If people want us, they can name us (as researchers),” said “A lot of work goes into being an advisor with no recognition of that hard work.”

At another session on reforming practice and research agendas, Dr Deb Duthie, Senior Lecturer in the Oodgeroo Unit of the Queensland University of Technology, described what she regarded as unethical questions and assumptions about Indigenous scholars and researchers.

“It’s often assumed that, as a researcher who is Aboriginal, that all my research is conducted in an Indigenous space,” she said. “I am also seen as the Indigenous knowledges expert, the ‘knower of all things Aboriginal’. She described requests from media and others to “describe Aboriginal and Torres Strait Islander culture”, who she then refers to the Tindale map and the knowledge that 500 nations equal 500 different protocols and traditions. 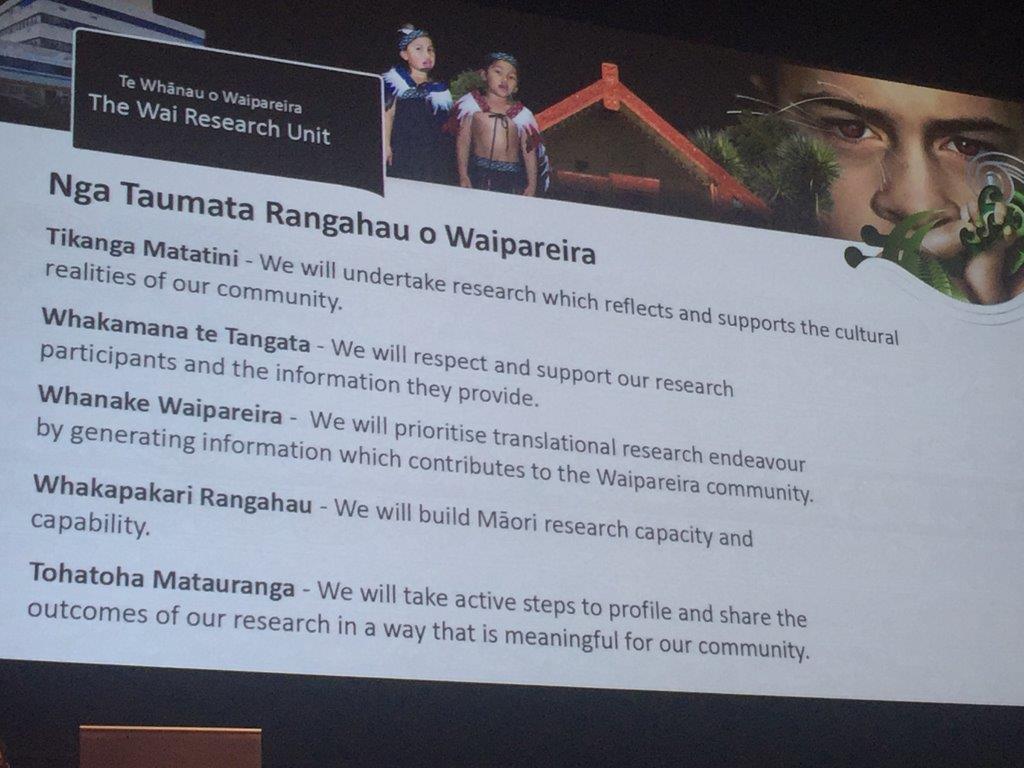 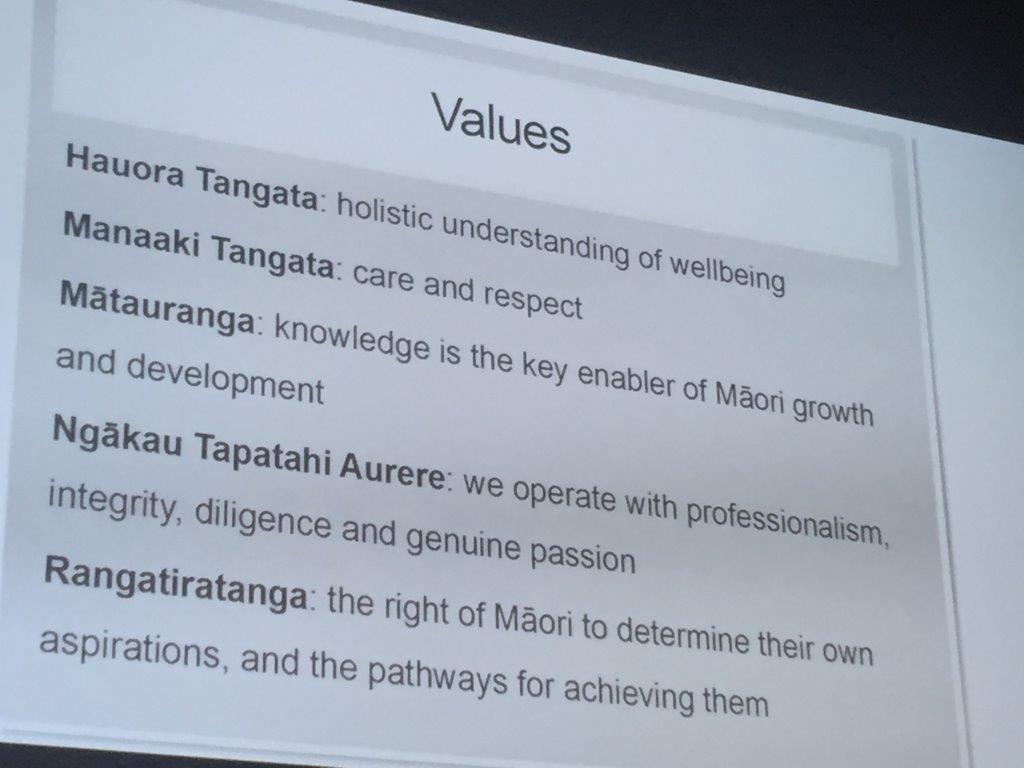 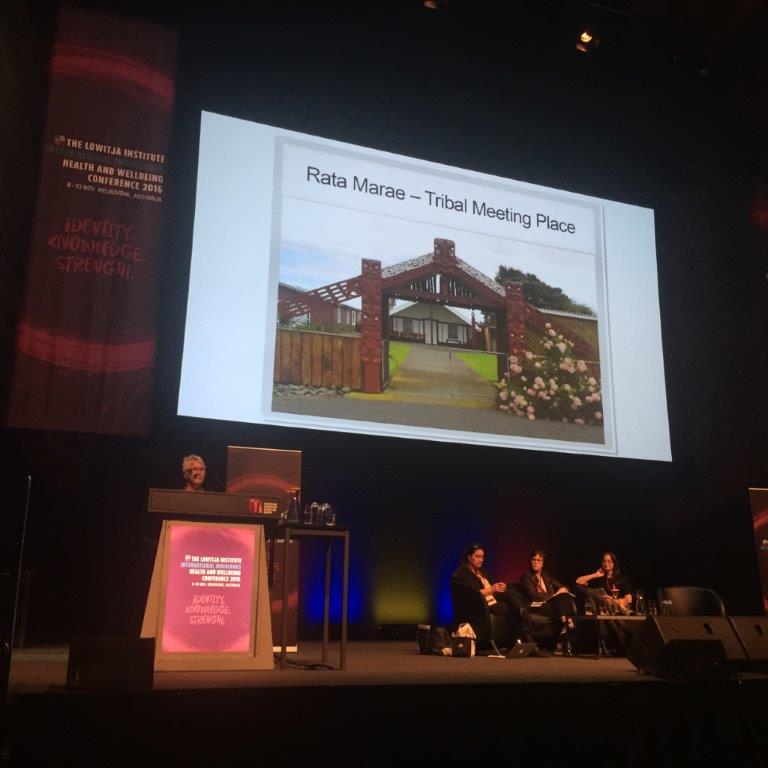 • Stay tuned for future articles by Dr Chelsea Bond in this series on research ethics.