Home Indigenous health Coutts-Trotter: Governments need to surrender some of our powers

Photo by Kat Jayne from Pexels

Coutts-Trotter: Governments need to surrender some of our powers

Governments have a reputation for not understanding the impact of their actions, especially on marginalised groups.

But when Michael Coutts-Trotter, Secretary of the NSW Government’s Stronger Communities Cluster spoke recently at Health Justice 2019, a conference organised by Health Justice Australia, he showed that this reputation can be misplaced at times.

The Stronger Communities Cluster is a merger of the NSW Department of Family and Community Services and the NSW Department of Justice. It has had a long and unhappy relationship with more marginalised people in the state, and particularly so with Aboriginal and Torres Strait Islander people.

Coutts-Trotter spoke of the need for organisations such as his to change.

We have to acknowledge our errors and be really open about that.

We have to lay down some of the extraordinary powers we hold and work hard to make ourselves available and accountable to the people we serve.

In our agency, most of them are at the absolute margins of the community, and unless we work really hard to make it possible for them to approach us, they can’t and they won’t.”

He went on to describe that the people who needed to change to repair the relationship were those in government.

“Unless we understand the history of our organisation, we can not make sense of the relationships we have and seek to build, particularly with Aboriginal people,” he said.

He said: “Family and Community Services, Communities and Justice … for Aboriginal Elders, for Aboriginal Aunties, we’re the welfare. Unless the organisation understands that, we can not begin to build a trusting relationship with the people we seek to serve.”

By serving the community, Coutts-Trotter was largely speaking about the desire of the Stronger Families Cluster to support parents to raise their children with the backing, rather than the fear of, government.

“It’s about having something to offer people that they value, it’s about finding a way to walk beside them, not over the top of them, and recognise that it’s unbelievably hard for people to approach us, given who we are, the powers we hold and the history we have,” he said. 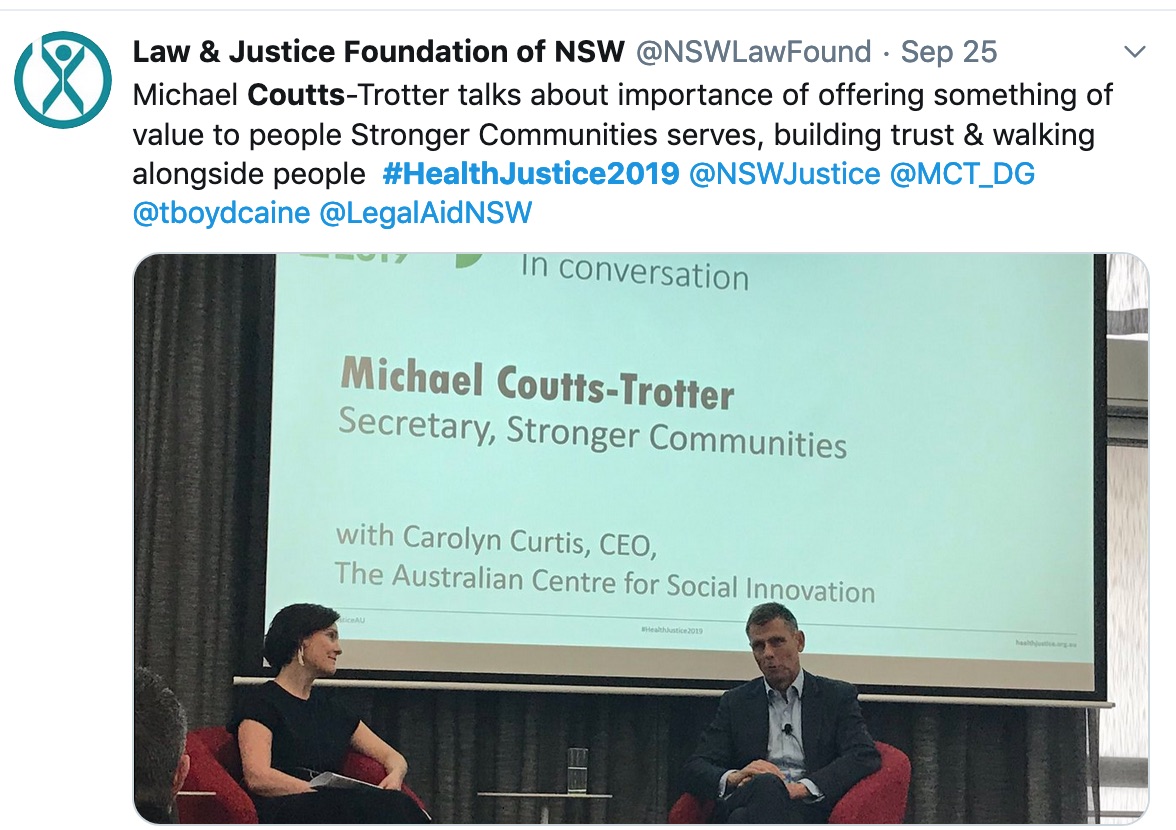 Coutts-Trotter described changes that had been made within government, with a positive result.

Two things changed that. One was a community-led campaign of anger, grief and insistence, with all sorts of communities, and all sorts of leaders, but with Grandmothers Against Removal a big part of it.

Secondly, it was a willingness for our organisation to challenge prejudices. … We discovered we were most likely to bring a child into care if we thought that child’s caregiver was resistant or wouldn’t engage.

If the child’s caregiver is an Aboriginal grandma who has seen us truck up to her front door over two or three generations, and at the time of the Stolen Generations has taken children away not because they were unsafe but because they were Aboriginal, being angry and shutting the door on us is an act of protection, not an act of noncompliance. It is keeping her children and her grandchildren safe.

Understanding that, and trying to work with and through community and community leaders has profoundly changed the culture and practice of the organisation.”

• Mark Ragg is an editor at Croakey and director of Ragg & Co. He was a guest of Health Justice Australia at the conference.