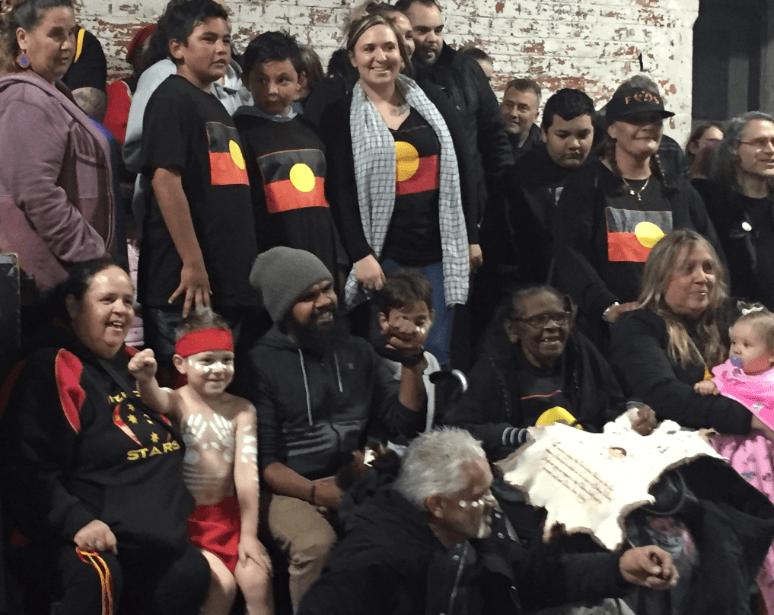 Dear PM: My name is Isiah and I am 6 years old. I hope you have a yarn with Clinton. 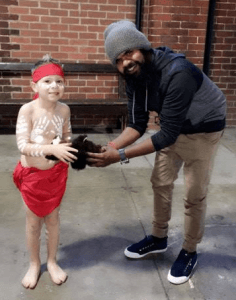 Clinton is a Wajuk, Balardung, Kija and Yulparitja man whose #WalkforJustice has so far taken him nearly 4,500 kilometres by foot across Australia, through scorching desert heat and bitter morning chill from Perth to Melbourne.

Isiah, whose family are Gunditjmara people from the western districts of Victoria, was so inspired by Clinton’s walk that he handed over his pocket money to buy a new pair of boots to help get him to Canberra. On Sunday he gave Clinton a letter, wrapped in possum skin, to deliver to the Prime Minister. It says:

“Dear Prime Minister. My name is Isiah and I am 6 years old. I live in Melbourne.

My great grandmother was a part of the Stolen Generations and this still affects my people today. Please don’t close our communities. Our people have a strong connection to the land. I hope you have a chance to meet with Clinton and have a yarn and listen to all the messages he received across Australia. 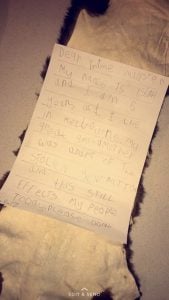 Isiah last year emptied his money box – $140 of his pocket money – to put on a barbecue for homeless Aboriginal people in inner Melbourne, and then emptied it out again last weeks for the boots he presented to Clinton on the steps of Parliament House in Melbourne.

In return, Clinton co-hosted a public event on Sunday with Democracy in Colour, in honour of Isiah, providing free food for anyone in need.

Watch this interview below with Isiah, his mum Shakara Montalto, who is a Project Officer at the Victorian Aboriginal Community Controlled Health Organisation (VACCHO), and his grandmother Tina Wright.

Photo credit for pix of Clinton and Isiah and Isiah’s letter: Shakara Montalto

A long list of priorities for a long walk to Canberra

Clinton’s list of priorities for justice for Aboriginal and Torres Strait Islander people started with fears about the closure of remote communities in Western Australia. The list is now almost as long as the walk he has taken since leaving Perth in September last year.

In each town and city, he meets with local Indigenous services and communities, talking about their issues and being joined for short stints on the road by Indigenous and non-Indigenous supporters who have raised $20,000 so far to fund his trek.

In Melbourne over the past week, he met with another legendary walker, Australian Football League champion Michael Long, who trekked 650 kilometres from Melbourne to Canberra in 2004 on his Long Walk to try to put Aboriginal and Torres Strait Islander affairs higher on the agenda.

Like Pryor, Long was joined on the road by supporters from all over Australia. Now each year he leads the annual Long Walk to the Dreamtime to the MCG for the traditional Essendon versus Richmond match that is the showcase event of the AFL’s Indigenous Round.

Clinton aims to go a little further, heading to Canberra via Sydney. His current timetable has him arriving in Canberra in early September, after nearly a full year of walking for justice. Follow his route here.

Read more about Clinton’s walk in this story by Miki Perkins in The Age: Clinton Pryor’s nationwide walk for justice, one step at a time

And you can watch this earlier Croakey interview with Clinton when he arrived in Adelaide in April.

Some snaps and tweets from the past few weeks 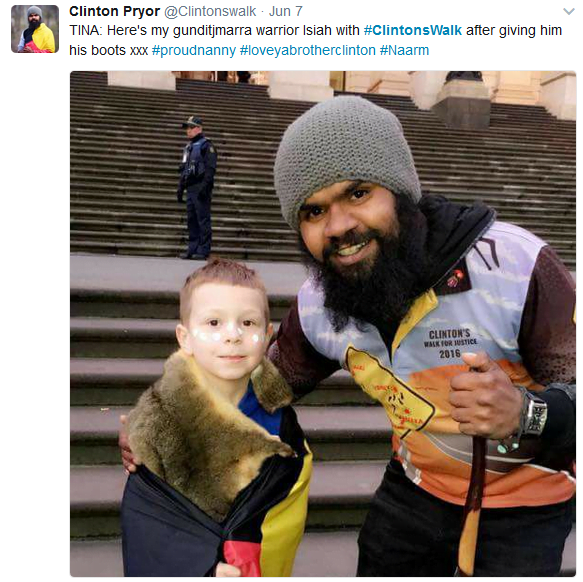 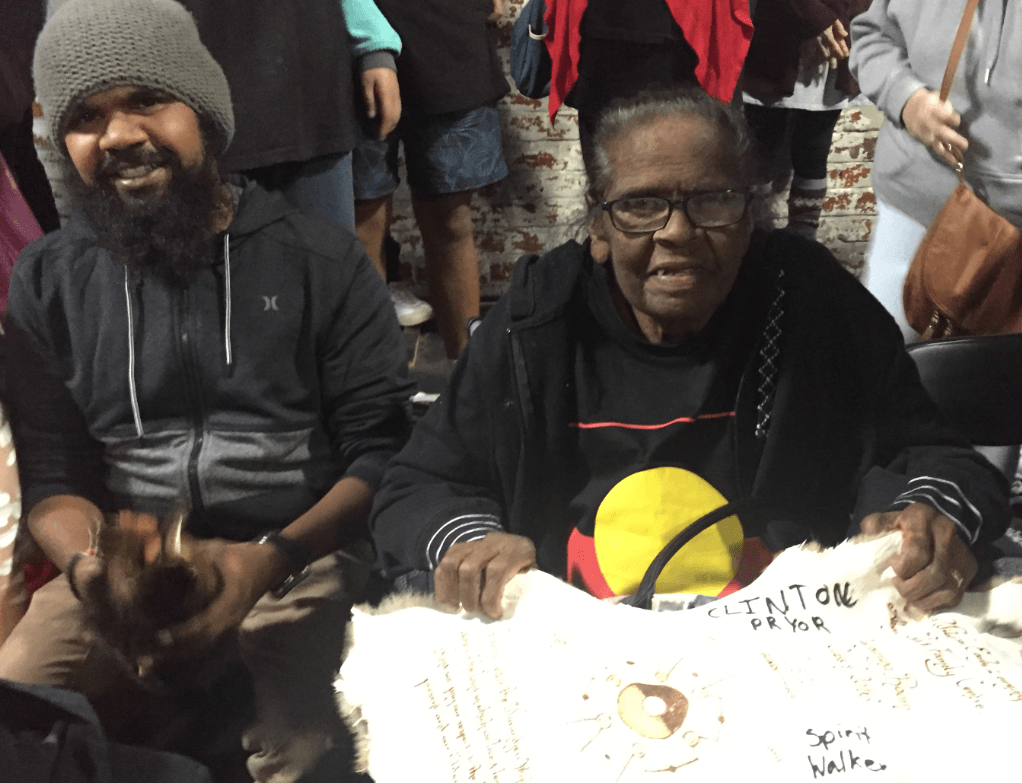 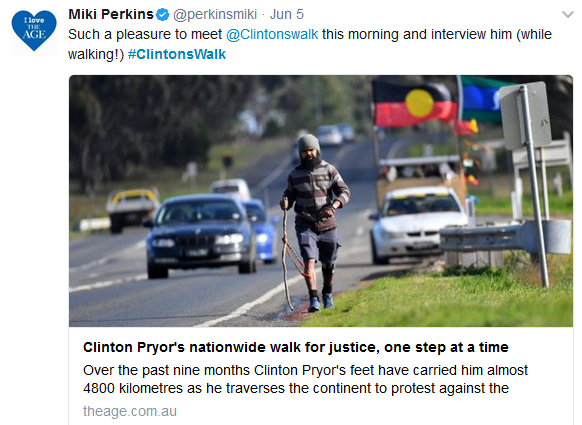 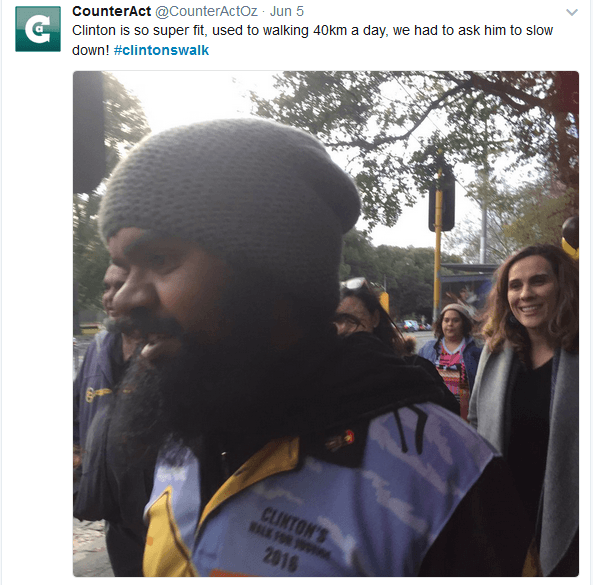 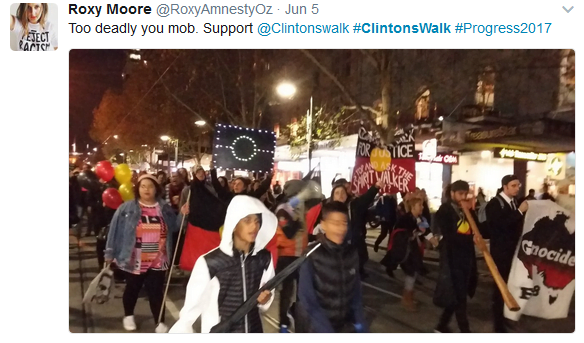 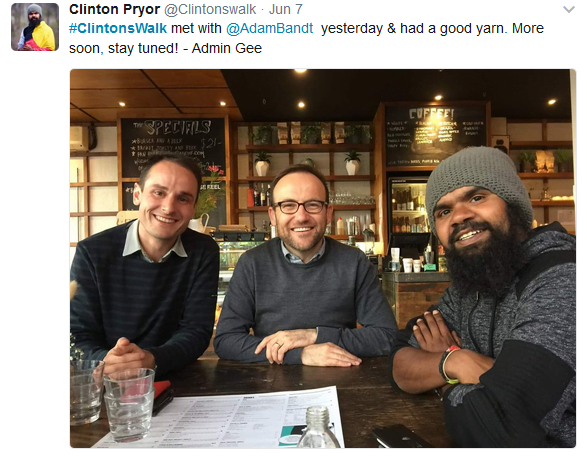 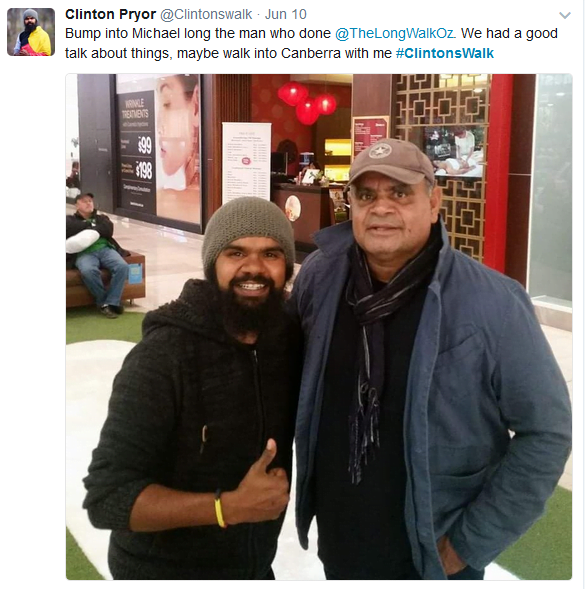 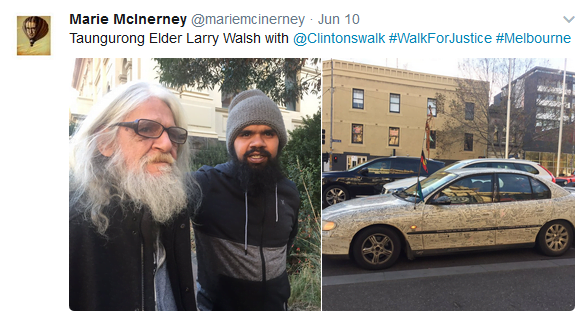 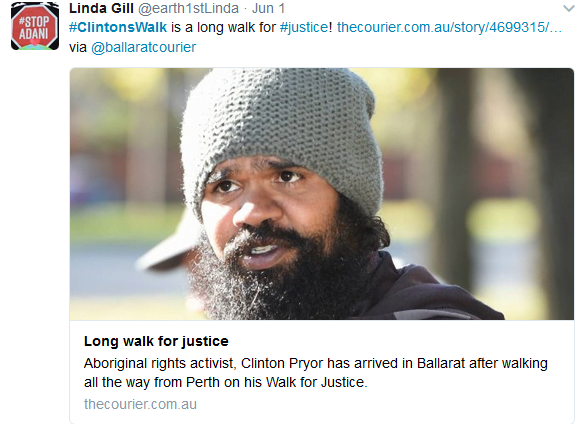 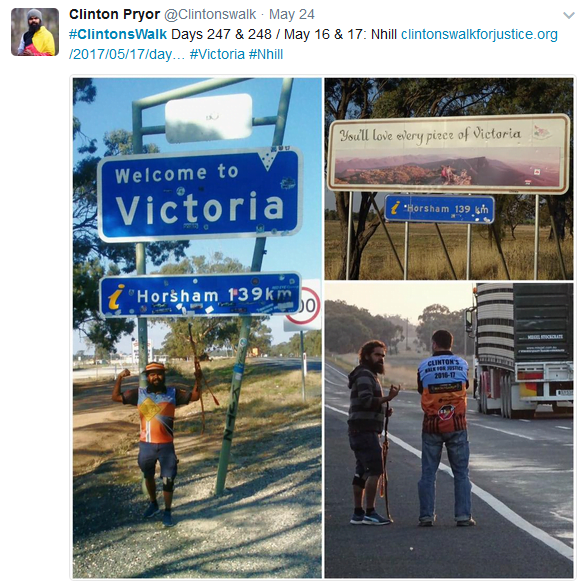 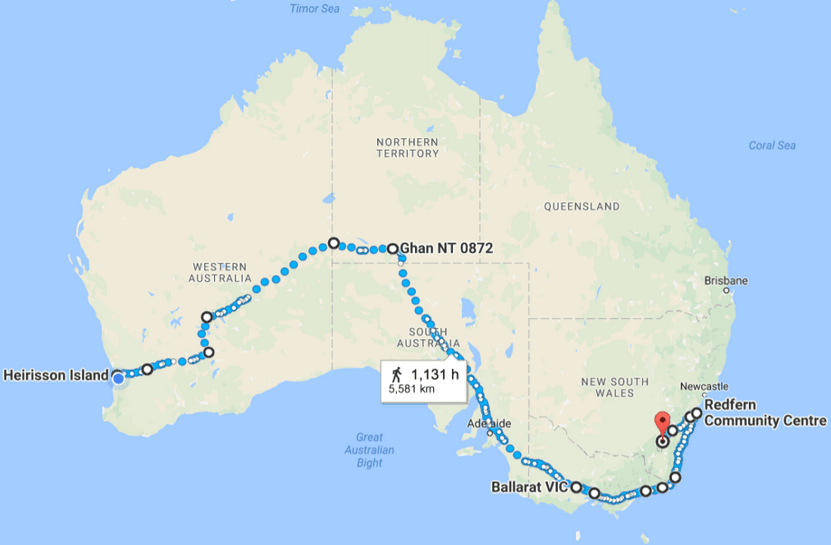 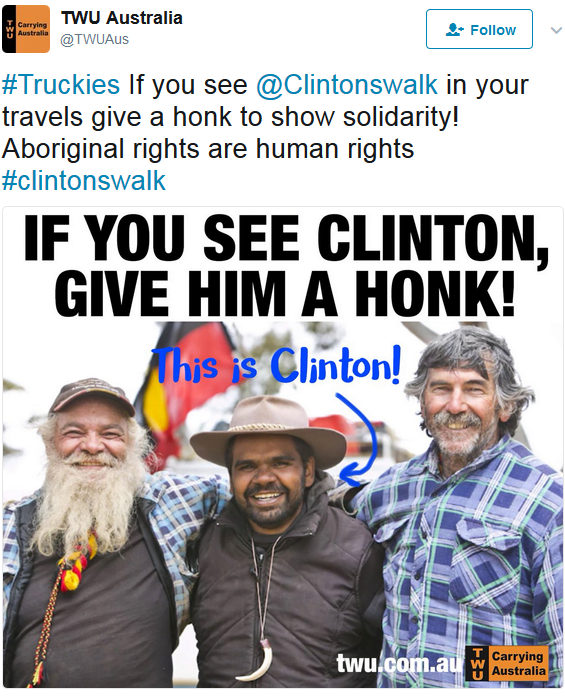 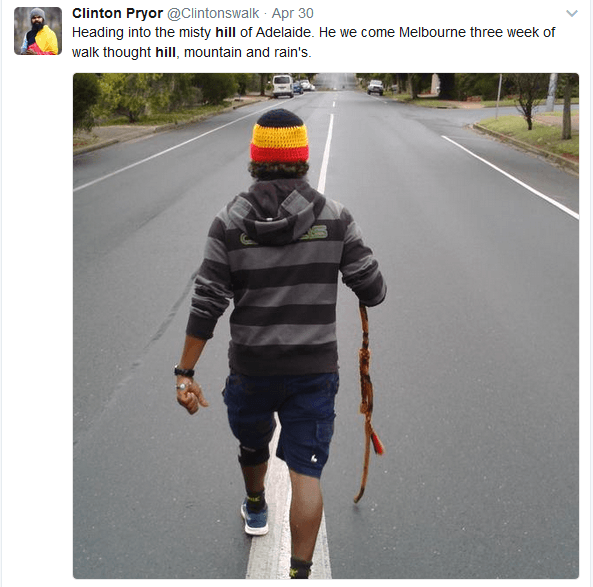 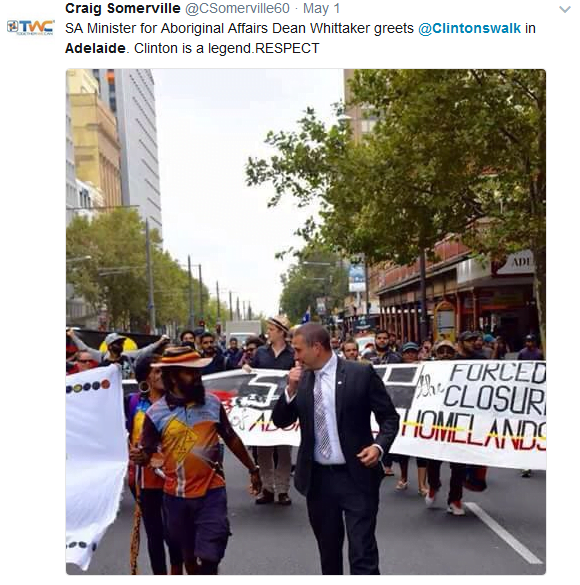