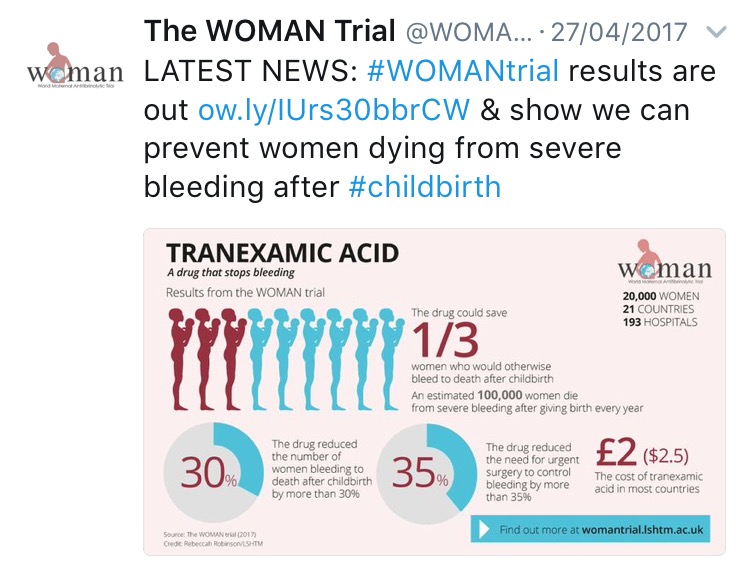 May 5 was International Day of the Midwife but, amid celebration of the vital role of midwives in the lives of women and their families, there were reminders that, worldwide, about one in four births still take place without the help of a skilled attendant. Even when an attendant is present, facilities and resources can often be poor.

Planning for the best outcomes for women and babies in resource poor settings needs to be pragmatic and innovative, and it also needs to consider the best available evidence.

In the post below, Dr Tari Turner who is currently a Senior Research Fellow at Cochrane Australia after a stint working for World Vision Australia, describes how the evidence from a well conducted and adequately powered international study that could save lives threatened by postpartum haemorrhage, will still face practical barriers at the implementation stage.

Globally, postpartum haemorrhage (bleeding after giving birth, PPH) is a major killer of women, the biggest cause of maternal death, responsible for nearly one hundred thousand deaths each year. More than 99% of these deaths occur in low resource settings.

In well-resourced settings, deaths from postpartum haemorrhage are rare, largely because an injection of oxytocin (an agent that increases uterine tone), is all that is needed in most cases to prevent major bleeding and save lives.

So it seems obvious that we should be making sure that oxytocin is universally available to women giving birth – that would solve the problem, right?

Well, no, actually. While there is certainly a case for improving access to oxytocin, to be effective it needs to be kept refrigerated and be delivered by injection requiring a skilled health worker. Both fridges and skilled health workers can be hard to find in many health settings. So in less resourced settings another approach is needed.

It felt like we had just about settled on that other approach – providing another uterotonic,  misoprostol, during the third stage of labour. Misoprostol comes as a tablet, and doesn’t require refrigeration. Excellent. It’s not as effective as oxytocin, and has some side effects, but it’s better than nothing. But…

The big but for misoprostol is that if it is taken prior to delivery, that is, earlier in pregnancy, it can result in miscarriage. Health policy makers have been understandably concerned about this risk.

To overcome these concerns, the health community has spent the past 10 years developing, piloting and testing ways to safely get misoprostol into the hands of the women who need it, when they need it.

This has meant setting up procurement systems, training community health workers and many, many rounds of discussion with communities and decision-makers. It was a lot of work, but progress was being made. And now…

And now a bright, shiny, new trial has been published in The Lancet that throws a spanner in the works. The WOMAN trial (I love a good acronym) included more than 20,000 women in 21 countries.

It found that administering the anti-fibrinolytic drug, tranexamic acid, substantially reduced death due to bleeding after childbirth. Obviously this is a huge win. But…

The thing about this study is that tranexamic acid was delivered by injection to women with established PPH, which kind of gets us right back to where we started. The authors, and there are a lot of them, acknowledge this and “urge” further research to see if tranexamic acid can be effectively delivered in other forms, but for now we just don’t know.

While the WOMAN trial is potentially a fantastic step forward for treatment of postpartum bleeding, it is only a slight exaggeration to say that for the large majority of decision makers wanting to know how to develop health systems to combat deaths from bleeding, it’s essentially useless.

Could tranexamic acid be the next big thing in treating bleeding and save thousands of new mums’ lives? Possibly, but it’s definitely not ready for a community health worker to pick up of the shelf just yet.

And while we wait to find out, decisions about the management of PPH in less resourced settings still need to be made because, devastatingly, women will keep on bleeding to death in the meantime.

This situation is a big deal in itself, but it also highlights a more pervasive issue.

We are all (myself included) very quick to proclaim the merits of using research evidence to support health decisions. Evidence-based decision-making is, appropriately, the order of the day.

Decisions about how we deliver healthcare and what healthcare we deliver should be informed by the best available research evidence. But the reality is always more complicated that how it is described on the box.

Ideally research should enable decision makers to make well informed, evidence based decisions, by reducing uncertainty. By ruling out options that have been shown to be ineffective, and providing support for demonstrably effective options, research should bring clarity and focus to healthcare choices.

The postpartum haemorrhage example highlights that this isn’t always the case. Research doesn’t and shouldn’t always make our decision-making processes simpler. Sometimes good research brings new options to the table, sometimes it contradicts previous thinking, sometimes it shows us that the truth is a good deal more complex than we would like it to be.

The truth, however, remains the truth, and research is our best tool for discovering it.

*Dr Tari Turner is a Senior Research Fellow on Project Transform at Cochrane Australia, a three-year flagship health evidence project, which is piloting, refining and scaling-up innovations in evidence production by the global Cochrane network. She has recently returned to Cochrane at Monash University, following a stint at World Vision Australia. The views expressed in this post are her own, and do not represent those of Cochrane. On twitter @Tari_Turner