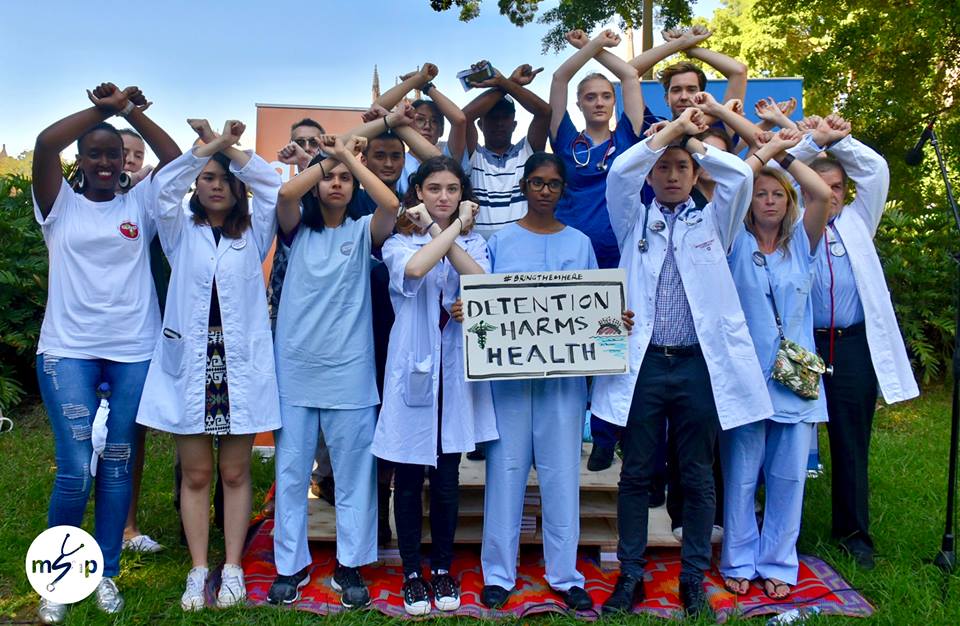 On April 7th, the Australian Medical Students’ Association (AMSA) held a student march for refugees in protest of Australia’s ongoing policy of mandatory, offshore detention in Manus Island and Nauru.

The Detention Harms Health – Student March for Refugees was organised by AMSA Crossing Borders, the AMSA Global Health Project to advocate for refugee and asylum seeker health, in conjunction with student global health groups in NSW and the NSW Medical Students’ Council.

Medical students from all over Australia attended the march, along with doctors, nurses, other health professionals and their families and concerned citizens.

My spirits were greatly lifted by #DetentionHarmsHealth march by medical students in Sydney today pic.twitter.com/5AzN1hD1hC

AMSA’s opposition to this policy is based on evidence that it is jeopardising the lives and wellbeing of hundreds of vulnerable men, women and children by forcibly detaining them in unsafe, unsanitary living conditions that lack adequate access to medical care.

AMSA also expressed concern about the inadequate access to medical care for detainees.  They argue that “While sick refugees and asylum seekers are sent to Port Moresby Hospital in Papua New Guinea for ‘treatment’, there have been countless reports of insufficient and negligent care. Delayed treatment (sometimes more than a year) markedly worsens the health conditions of already suffering refugees and asylum seekers.

So privileged to be able to walk with this inspiring community of medical students, doctors and advocates. Health is a human right for all 🌈❤️#detentionharmshealth #health #globalhealth #RefugeesWelcome #refugees pic.twitter.com/gwiJfyGkfE

“Many detainees have experienced extraordinary trauma that, coupled with indefinite detention, manifests as serious mental health problems. These mental illnesses only worsen with the more time spent in detention, especially as mental health services and counselling support is inadequate,” AMSA stated.

The aim of the march was to call on the Australian government to allow Australian medical personnel to independently assess the refugees and asylum seekers on Manus Island and Nauru. These appeals have been made repeatedly by the Australian Medical Association (AMA) and Colleges of General Practitioners, Physicians and Psychiatrists (RACGP, RACP and RANZP) but have consistently been rejected.

After attending the march a spokesperson for the Royal Australasian College of Physicians (RACP) highlighted the harms caused by indefinite mandatory detention for people seeking asylum.

“Australia’s policy of indefinite mandatory detention is inhumane and continues to cause significant harm to the physical and mental health of detainees, particularly children,” Dr Zwi said.

“Australian and international policies increasingly subject displaced children to immigration detention.  There is a growing body of evidence that suggests mandatory detention has a long-term mental health impact on children, compared with children who are given community placements.”

With 30 children currently being held in detention in Nauru, Dr Zwi said the Government should remove the provision of mandatory detention for children seeking asylum.

“The Government’s role is to safeguard and promote the ongoing health and wellbeing of all children. If we are to do this, then removing mandatory detention for children would be the most effective and powerful intervention.

“We need to see an immediate end to mandatory detention. All asylum seekers, including children, should be given safe and durable community placements until their claims are assessed.”

Information about the march was received by people being detained on Manus Island who sent back messages of thanks, such as the following.

To all the medical students in Australia
Thank you very much for your solidarities & support.
Your the future doctors of Australia & world
Much love from the refugees on #Manus & #Nauru
Aziz
@ManusAlert pic.twitter.com/U4zBsP5LtU

Funds were raised during the event for the Great Lakes Agency for Peace and Development International.