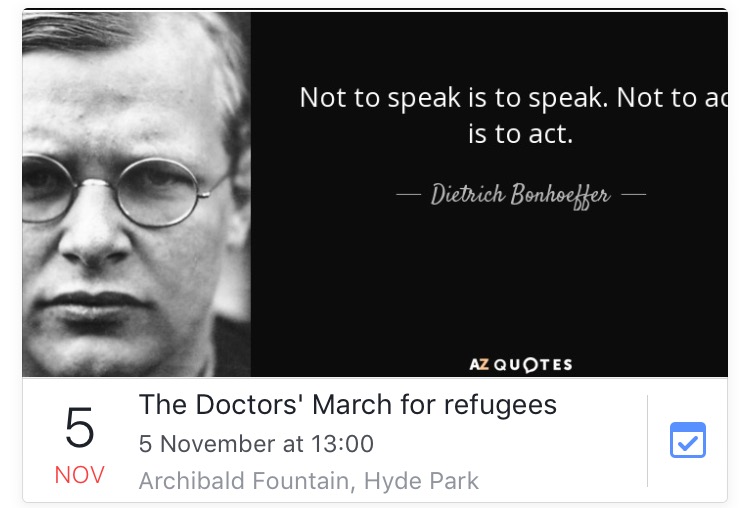 Does anyone really think it’s OK that Australia is treating a large group of asylum seekers, many of them children, in a way in which human rights groups say is tantamount to torture?

It’s a question that should be particularly resonant for people who have worked in healthcare, where two key guiding principles are: behave ethically; advocate tirelessly.

Healthcare organisations have become increasingly uneasy about our harsh treatment of asylum seekers, as have individual practitioners. An open letter Urging Peter Dutton to show compassion to refugees currently has in excess of 500 doctors’ signatures.

The post below is a call for all doctors and health professionals to show “moral and ethical leadership” on this issue, by attending marches around the country this weekend or next.

Early on in our training, doctors learn to incorporate ethical thinking into our decisions so that it becomes second nature.

As time goes on more layers are added to the decision-making process and sometimes it’s easy to forget what underpins the way we think, but in the end it all comes down to ethics.

Ethics runs in our veins. Not doing harm is our guiding principle. Few other professionals live their lives at the ethical tempo we do, and I believe we are also compelled to advocate fearlessly on behalf of people who are not directly our own patients.

I am talking here, of course, of the innocent individuals in immigration detention in Australia (one is coming up to eight years in detention) and in Australia’s offshore detention camps (several thousand, including children, in detention for three years and counting and with no prospect of release).

It has been pointed out by academics, and this month again by human rights group Amnesty International, that detainees, particularly those in offshore detention are held in conditions amounting to torture. The UN Rapporteur has also just slammed Australia’s human rights record. Again.

Let’s just say that once more, more explicitly, so we can really try and grasp this mind-boggling fact: The Australian government is incarcerating and torturing innocent people. Can you believe that? I really can’t.

As a member of Doctors for Refugees, an organisation that pursues medical advocacy for asylum seekers and refugees, these people are also in some way my patients.

I work in the public hospital system in Australia, a government employee, an instrument of Australian government policy. In this, I’m lucky. My job is to advocate powerfully for my patients and ensure they get the best medical treatment available.

It’s a privilege to be employed to do this. It’s a sign of the enlightened nature of Australia that such a service can exist, but it makes the contrast with my not-for-profit activities, where I advocate for innocent people who are being harmed and abused by Australia, all the more stark.

In my recent editorial in the BMJ, I highlighted the failure of evidence, advocacy and reasoned argument in putting an end to what will ultimately be viewed by history as another shameful chapter in Australia’s history.

I called on Australia’s doctors to show moral and ethical leadership and to take to the streets with me to protest at the appalling ill-treatment of innocent people, who could best be termed ‘Australia’s political prisoners’.

I hope, therefore, that all doctors, healthcare professionals and other caring people will join me on ‘The Doctors’ March’ in Sydney on Saturday November 5th at 1pm at Archibald fountain in Hyde Park to march to Circular Quay.

We are calling for:

The desire to do the right thing for our fellow humans is why most doctors chose their profession in the first place. I hope you will demonstrate that and how many decent people there are in Australia, with me, on October 30th and November 5th.

Dr David Berger is an executive committee member of Doctors for Refugees. On twitter @davebergie

Doctors for Refugees on twitter@Drs4Refugees

This is an updated version of an article published in Medical Observer. Reproduced with thanks.

Events around the nation

Canberra Sunday October 30th 1-2:30pm Meet outside the entrance to the Legislative assembly at 12.45. Meet our fellow health professional MAPW friends at their banner. Contact Rosie 0435004648.

Cairns Saturday Nov 5 D4R march– Dept of Immigration and Border Protection office at 85 Spence St at 10am. March at 10.30am via Shields St to the Esplanade where there will be speakers. Carla 0488 760 854

For those who cannot attend, please show your support by signing the open letter, urging the Minister for Immigration to show compassion to refugees.