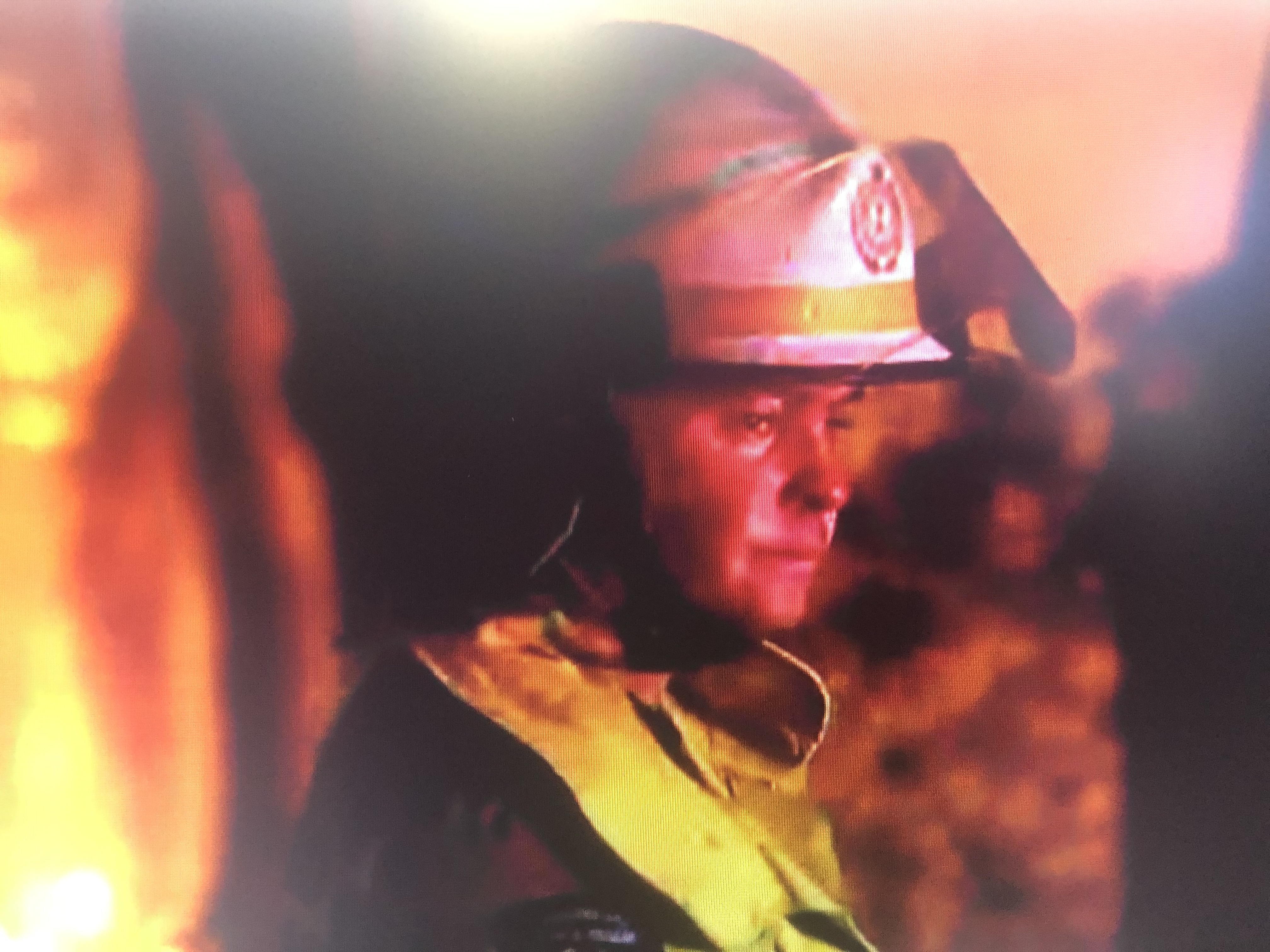 “Like nothing we’ve ever seen before.” “It’s just not within people’s imagination”.

These are some of the reactions we’ve heard from senior and former senior Australian firefighters to bushfires that have raged in early Spring across New South Wales and Queensland, amid warnings that they are an “omen” for what may come in the summer.

In Australia as elsewhere, climate change is bringing “a new world of bushfires”, making every risk factor worse and fuelling fires of increasing frequency and ferocity.

As well as a growing threat to communities and the environment, this new world is posing a greater threat to those who have to protect them, says Vivien Thomson AFSM, a firefighter and co-founder of the Australian Firefighters Climate Alliance.

She writes in the article below about the growing risks for Australia’s mainly volunteer firefighting force as, under the influence of climate change, fire seasons are growing longer each year and the number of days of Very High fire danger and above are also increasing.

Australia is one of the most bushfire-prone countries in the world, and firefighting is a part of Aussie culture. Thousands of career and volunteer firefighters across the country work hard to keep our communities safe, responding to emergencies, preventing fires, and educating communities.

Firefighters and other emergency service workers are instrumental in protecting our lives, property, and natural heritage. But even so, these brave men and women work in conditions that are very stressful for their physical and mental health.

From increased risk of injuries and heat stress to a high degree of vulnerability to mental health issues like post-traumatic stress disorder (PTSD), firefighting can have immediate and long-term health risks.

And as climate change exacerbates hot and dry conditions, increasing fire danger across many parts of Australia, there are worse dangers and health risks in store, unless Australia and other countries rapidly reduce emissions and halt climate change.

Working shifts of up to 14 hours—and sometimes longer—with heavy equipment and physically demanding responsibilities is all in a day’s work for firefighters. We work hard to maintain our fitness, but the science does show that intermittent exertion can trigger cardiac events—especially in middle-aged men, who make up much of Australia’s bushfire-fighting force.

Injuries such as strains and sprains are also not uncommon among firefighters, as accidents can happen when we move in and out from fire trucks carrying hoses and other equipment and move quickly across uneven terrain—often with low visibility.

Firefighters know regular exercise can reduce these risks, and make sure to build up our endurance, strength and flexibility so that we’re in peak condition for fire season. Regular health assessments and support from our organisations also help.

But exercise doesn’t do much to protect against smoke inhalation and heat stress. The toxic substances and microscopic particles in bushfire smoke, for example, can lead to issues like impaired lung function and more stress on the heart, and worsen respiratory problems like asthma and bronchitis.

And as for the heat, the high temperatures of fire conditions are compounded by the body heat we generate from heavy exertion whilst we wear our personal protective clothing. There are several degrees of heat sickness, from heat stress to exhaustion to life-threatening heat stroke.

If we’re not careful, these health threats can become a life-or-death issue; so we take every precaution possible. For instance, as a team leader, I get my crews to start drinking water early in the morning on hot days, so that when a fire does break out, we are fully hydrated by the time we reach the incident.

We take a safety-first approach, and take preventative measures such as on-site medical crews at staging areas to assist us when needed. But we know that unless one of the major causes of worsening bushfires in Australia is stopped, we’ll be up against tougher and tougher conditions.

The physical health risks of our job are very visible—the frequent images of black, sweaty firefighters we see give us a good sense of the physical dangers we face. The mental health impacts of the job are much less visible.

We go into dangerous situations, do the best job we can to get everyone out safely, and minimise damage to property. This used to be a for a fixed number of months a year, but fire seasons are growing longer each year under the influence of climate change.

On the job, we have to make tough decisions, and after the flames have died down, we must reckon with the things we didn’t manage to save—and the grief of the people who have suffered losses.

These painful and terrifying moments are difficult to forget, and take a toll on us. Often, the slightest change in temperature or wind can trigger intense flashbacks. It happened to me a few years ago—a hot dry breeze blowing across my deck took me back to the 2003 Canberra bushfires, and it took me several minutes to shake off the sudden sense of dread.

For rural firefighters, many of us serve in the communities we live in—our kids go to the same schools and play sports together, and we see each other regularly.  It’s always painful when people sustain losses because of fire—but the pain is compounded when it’s our friends and neighbours and the community we live in.

Sometimes, with nowhere else to direct the blame for what’s happening, affected communities may find fault with firefighters. These tensions are part and parcel of the job, but they do take a toll, especially when they arise within our home communities.

In the past, we’d be able to leave all this behind at the close of a fire season, and go off to spend several months with our families and friends, tending to our other responsibilities, relaxing, and planning ahead.

But as fire seasons lengthen, firefighters—especially volunteers—have shorter and shorter recovery periods. The exhaustion and burnout resulting from this isn’t good for mental health, and can lead to potentially dangerous lapses of concentration on the job. It can also come at the cost of family life and other economic responsibilities.

All things considered, it should come as no surprise that potentially one in ten firefighters can experience post-traumatic stress disorder. We receive support to cope with these stresses, but this can only go so far when we know that our greenhouse gas emissions are still rising—meaning we’re in for more intense fire conditions in the future.

Despite knowing the many mental and physical health risks the job entails, we still choose to work as emergency responders every day. We’re driven by the deep fulfilment we get from contributing to our communities, by protecting our families, friends and assets and our way of life.

We commit ourselves to do our best—and it’s high time the Federal Government matched the dedication and commitment of emergency services professionals.

To start with, we need more attention to the new challenges that firefighting organisations face due to worsening climate change, and a national policy—as well as more resources, equipment and recruits—to help agencies cope, and keep firefighters and communities safe.

But most importantly, I’d like to see the government show that it is serious about our safety by developing and implementing a credible climate policy. We have to stop digging up and burning coal, oil and gas—the biggest climate culprits—while investing in low-carbon industries like renewable energy and services to create new jobs.

Only this will bring about meaningful change to the unprecedented levels of danger and stress we work in today. And every time this government ignores the issue to instead spruik coal, cite dodgy numbers to pretend we’re meeting our climate targets, or spin our rising emissions as a good thing, I want them to remember they’re just fanning the flames.

Vivien Thomson AFSM is a firefighter and co-founder of the Australian Firefighters Climate Alliance (AFCA).

Thomson has been a rural firefighter for 31 years and held several leadership roles, including being the captain of a brigade and President of the ACT Fire Controllers Group. In 2004, she achieved the highest honour possible, the Australian Fire Service Medal for distinguished service to the Australian Capital Territory Bushfire Service, as both a departmental and volunteer firefighter, and as a brigade officer.

She lives and works on the family farm at Muttama in New South Wales and witnesses climate change first hand on the farm as well as firefighting. In 2013, Vivien released ‘Ashes of the Firefighters’ – a book that documents the journey of nine people after experiencing a major bushfire event.

This article is published as part of the Covering Climate Now initiative, an unprecedented collaboration involving more than 250 media outlets around the world that is putting the spotlight on the climate crisis in the leadup to a Climate Action Summit at the United Nations General Assembly in New York on 23 September. It is co-founded by The Nation and the Columbia Journalism Review (CJR), in partnership with The Guardian. Croakey invites our readers, contributors and social media followers to engage with these critical discussions, using the hashtag #CoveringClimateNow. See Croakey’s archive of climate and health coverage.