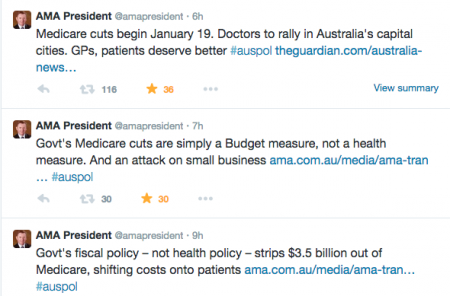 The Federal Government is facing the prospect of doctors marching on the streets against its latest Medicare package – possibly ahead of the Queensland state election on January 31 where health cuts are already on the agenda.

The Australian Medical Association (AMA) yesterday signalled it was launching a campaign to put a stop to the changes.

We have a new Health Minister, and obviously the new Minister’s getting across her portfolio at the moment, but we would hope that common sense will prevail. Now, these changes are due to come in on 19 January. Parliament can disallow them when they come back in early February, so they will be introduced before Parliament has the chance to make the disallowance, but when they come back, the AMA and the other groups will be campaigning very strongly to make sure that these changes are stopped.

See the full transcript of his interview, which steps up the relatively mild response to the package by the peak bodies when it was first announced. See also these reactions. Minister Ley has not yet spoken publicly in detail about her plans in health but those concerned about universal health care being undermined in Australia will find little solace in this recent profile of Assistant Health Minister Fiona Nash who dismisses most concerns on major issues as “noise”.

This Croakey post by Tim Woodruff from the Doctors Reform Society explaining the changes and their implications for GPs and patients of the Plan B package, and what role the Senate might play, has also had huge interest since it was posted.

Guardian Australia said that Labor, the Greens and crossbench senators have vowed to disallow one measure – to cut GP rebates for general patients by another $5, which will be introduced in July. But it says “fears are growing that the government could try to ‘play chicken’ with the Senate – forcing it to take the untenable step of abolishing all Medicare rebates if senators try to oppose the $5 rebate cut.” See its full report.

Owler said the changes were purely a Budget measure.

Now, when they took the initial proposal off the table, what they’ve done is announce further changes which actually still achieve those savings, so what this is all about is actually not about general practice, it’s not about preventing chronic disease, what it’s about is saving money and making the bottom line of the Budget look better, because the third element to all of this is actually a freeze on patient rebates as well. 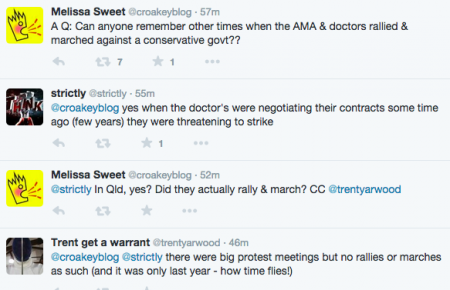 The Royal Australian College of GPs (RACGP) has also launched a campaign ‘You have been targeted’, calling on GPs to send protest letters to the Prime Minister and encourage their patients also to do so.

It released a statement yesterday urging the Government to establish a moratorium until the full consequences of its policy have been assessed.

This policy will have an immediate effect on GPs and patients, including such key components of general practice such as immunisation rates and point of care testing to name just a few. The policy appears to have been prepared in haste and its consequences and acute implications were not appreciated by the Government, the general practice profession or by patients.

See also this statement released today by the Consumers Health Forum of Australia, which says:

Unlike most other goods and services, the need for health care is not something over which the consumer can exert that much influence at the time. For them the $5 slug may be a fortnightly reality along with a variety of other health costs that come with chronic illness.

To put the co-payment in the category of just another “price signal” in the marketplace misses the over-riding reason for a universal health scheme like Medicare: to ensure those in need of health care can seek treatment free of cost concerns. 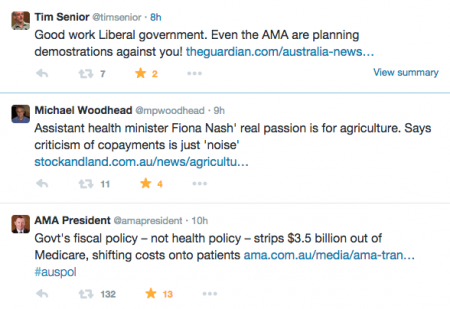