Home Public health and population health Coronavirus outbreak 2019-2020 For public health, some congratulations, as well as reasons for fury 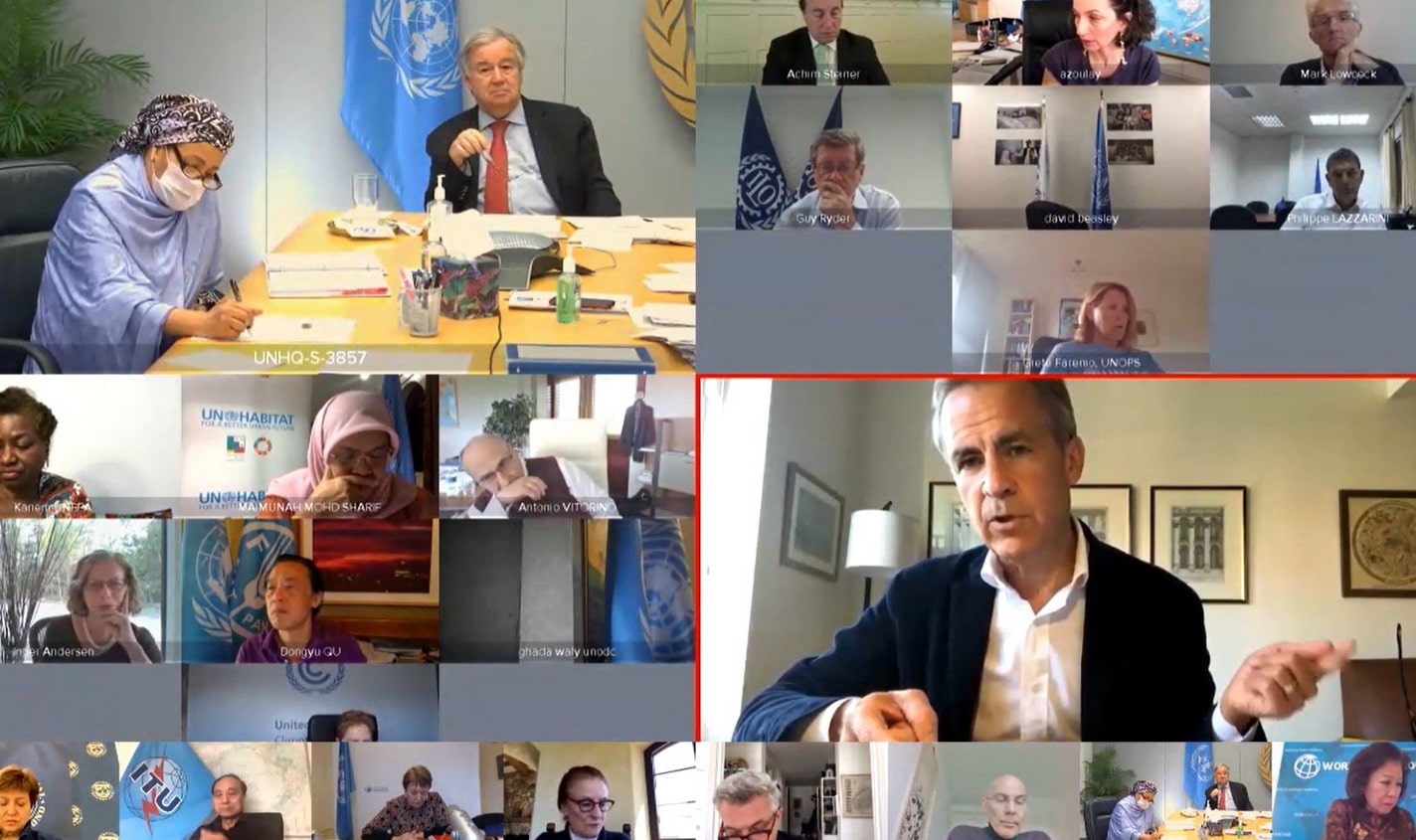 For public health, some congratulations, as well as reasons for fury

Introduction by Croakey: The Public Health Association of Australia is recognising the work of the Australian Health Protection Principal Committee (AHPPC) with a special PHAA President’s Award for the committee members.

PHAA president David Templeman said in a statement that they had undoubtably saved lives, and had been “tireless and fearless” in their advice, which had put “Australia in an enviable position worldwide”:

They deserve every form of recognition Australians can give. The Public Health Association is proud of them, and proud to be recognizing them formally through this award.

In response to the COVID-19 pandemic the AHPPC has been the engine room that has driven the capture and synthesis of the vital data on the unfolding pandemic, which has underpinned their policy advice to our political leaders.”

The PHAA published the membership of the committee, which prompted some discussion on Twitter about the importance of transparency around the committee’s membership and operations, with health promotion practitioner Daniel Reeders saying:

The one other thing I’d love to know is the committeee’s terms of reference — do they make decisions by consensus, for example? Do their decisions get made with minority dissent, or do they keep discussions going until there’s unanimity?”

Meanwhile, Emeritus Professor Ian Webster AO reviews the history of public health in the article below, cross published from Pearls and Irritations, and issues some timely calls for support for the World Health Organization (WHO).

He raises concerns about Prime Minister Scott Morrison’s attack on the WHO, saying he was “acting as an echo chamber for Donald Trump’s attack”.

In related news this week, global public health leaders Dr Helen Clark and Dr David Nabarro have called out a vacuum in global political leadership on COVID-19, citing the United Nations Security Council’s failure to pass a resolution on the pandemic in face of attacks on the World Health Organization. 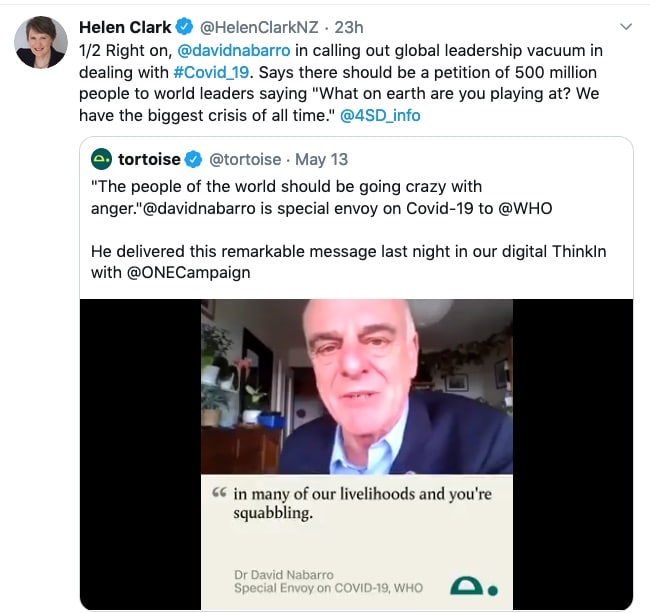 We just have a complete fracture in global leadership right now, to the point where the UN Security Council resolution on COVID was not approved because the World Health Organization was mentioned in the resolution.

We have the biggest crisis of all time in many of our livelihoods and you are squabbling.

Together with the World Food Programme and UNICEF, it is running the only airline bringing supplies into Africa, bringing tests in, we are dealing with the market failures.

For heavens sake, what are you doing?!'”

Walking on a hillside outside Eyam in Derbyshire there are two weathered rocks with holes on top. Coins were placed in the holes under vinegar by the village rector to pay for the food neighbouring farms delivered. In the “village of the damned” forty-two deaths from the plague had occurred. The rector persuaded his parishioners to quarantine themselves to prevent the plague spreading to the villages of Sheffield and Bakewell. They stayed, facing death.

In a population of 350 to 800, 260 people died – a fatality rate of 30 percent to 75 percent from human-to-human transmission albeit through the intermediary of flea bites. That was 1666, shades of today with lockdowns, physical distancing and quarantining.

These measures, with personal hygiene, are the tested and effective measures that must underpin the control of epidemics. As Stephen Leeder said in Pearls and Irritations on April 15, “old ways of managing epidemic illness – social distancing and quarantining – have been dusted off and put to good use”.

As medical students we thought infectious disease had all but been defeated by antibiotics and vaccines – penicillin for pneumonia, streptomycin and BCG for TB, vaccinations for smallpox, tetanus toxoid and the Salk vaccine just around the corner. Since then, the mycobacterium, the staphylococcus and other bacteria have thwarted our interventions.

Behind our backs, public health became the poor cousin of biomedicine and was dismissed as ‘drains and sewerage’. How wrong we were!

Control of contagious disease has always been the stuff of public health. Quarantine started with the First Fleet in 1788, later formalised by State (1830-50s) and Federal (1908) legislation. Smallpox vaccine became available in 1804 and campaigns started in the 1930s, pasteurisation of milk was introduced in 1950s – pasteurisation being discovered in 1860s, mass TB campaigns started in 1945 – the tubercle bacillus being discovered in 1882, and polio vaccination commenced – Salk in 1956, Sabin in 1966, Triple Antigen in 1953 and MMR for mumps, measles, rubella in 1989.

Vaccinations for the rotavirus, pneumococcus, meningococcus and Haemophilus influenzae and for hepatitis A and B then followed. Widespread community influenza vaccination became available through government funding support in 2015. And drugs to treat HIV/AIDS and hepatitis C have also provided opportunities for prevention.

Public health has benefited from social reforms as well – the eight hours day, the minimum wage, women’s suffrage, infant welfare, aged and disability and ‘TB’ pensions, sickness and unemployment payments were all gains for public health.

At some point, the coronavirus will give way to the ever-present non-communicable diseases, the ‘diseases of affluence’ and the “diseases of despair and hopelessness” – addictions, alcohol abuse, suicide, unremitting pain. Australia has done well here, too. Deaths from heart attacks, strokes and other conditions, fell before the UK, US and most other countries. The “Slip, Slap, Slop” campaign for skin cancer is an example of the early take-up of health promotion. National plans and strategies for mental health and suicide prevention and the national drug strategy have all been in the vanguard internationally.

Beyond the nation’s boundaries, the world around us – the environment, climate change, populations, global conflicts, food and water supply and economic inequality – threaten human and planetary survival.

Recent revisions of state Public Health Acts will enable government policies to shift in these directions. And readers of Pearls and Irritations are indebted to the weekly updates from Peter Sainsbury on climate and the environment.

There is no easy path for public health. In the US protestors wave “nanny state” placards and carry threatening firearms as they agitate against lockdowns and social distancing.

The pejorative ‘nanny state’ first appeared in 1965 from the one-time UK Health Minister, Iain McLeod, a heavy smoker – a criticism of government public health actions which were taken up with alacrity by the tobacco industry and Margaret Thatcher.

A Google search will find a myriad of references in Australia to the ‘nanny state’ – tobacco and alcohol restrictions, gun and drug control, food labelling, speed limits, ‘random breath testing’, pool fencing, ‘fluoro vests’ and much more – voiced by “shock jocks”, conservative think-tanks and shadowy websites; among them the libertarian former senator, David Leyonhjelm. Some in the media even went so far as to deny the existence of an epidemic, let alone acknowledge the developing pandemic.

No room for complacency

What then of Australia and the pandemic? The ‘nanny state’?

As the Guardian Weekly said on May 1:

Ronald Reagan’s wisecrack – ‘The nine most terrifying words in the English language are: I’m from the government and we are here to help’ – would not get a lot of laughs today. In much of the world, people are desperate for the government to show up and rise to the challenge of the coronavirus pandemic.”

Australia will not experience the loss of life as heavily as other countries, but this should not lead to complacency as, we too, must re-evaluate our public health and social systems.

Prevention is not a priority for the government, or the community, and preventive actions are usually too late, “catching those who fall at the bottom of the cliff” rather than anticipating future events.

There is much to be done:

Public health is important as it reflects our values – communal and personal – and the way we shape our working and living environments and above all, our connectedness to each other and the community.

Ian W Webster AO is Emeritus Professor of Public Health and Community Medicine of the University of New South Wales. He has worked as a physician in public and regional hospitals in Australia and UK and in NGOs dealing with homelessness, alcohol and drug problems and mental illness.

Note from Croakey: the feature image was taken from this tweet 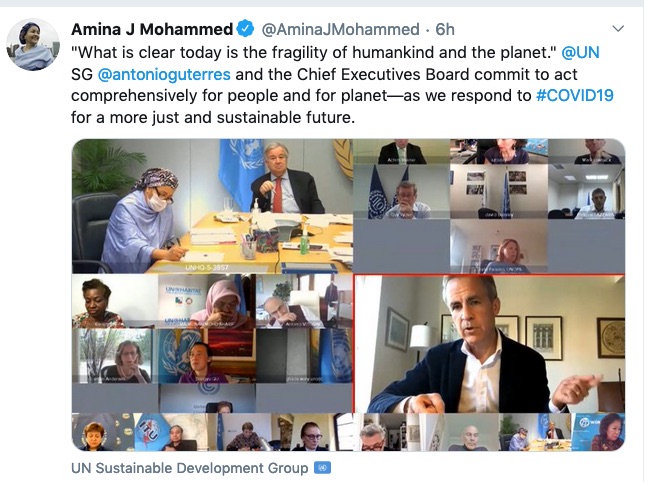