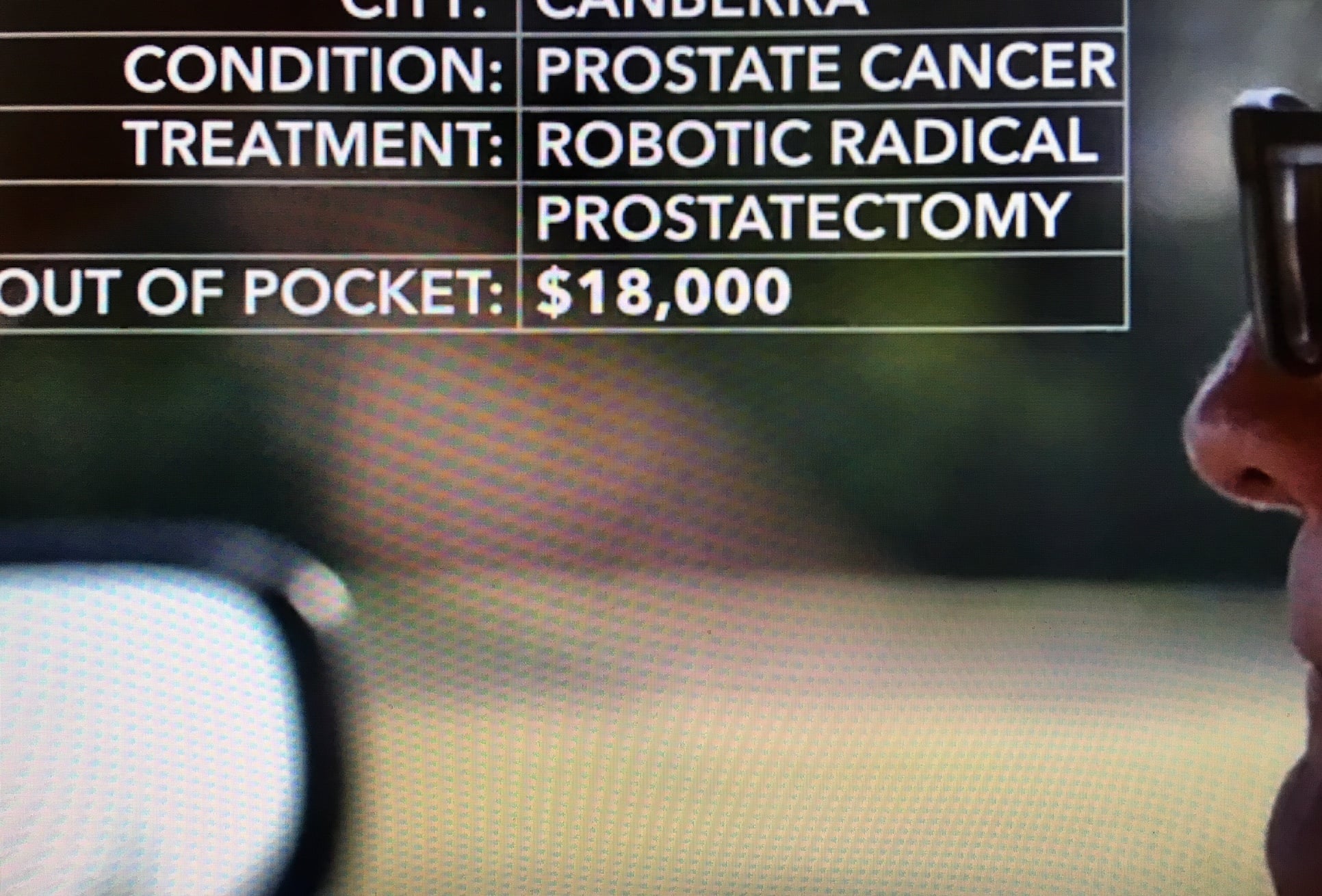 Four Corners MindTheGap episode: a one dimensional look at a multifaceted problem

A single tweet put Monday night’s Four Corners episode into perspective for me. 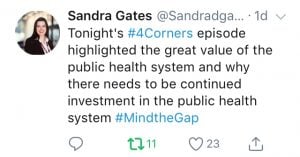 I’d been trying to put my finger on what seemed out of kilter with the whole segment and there is was: the program had virtually ignored the bedrock of Australian health care, the public hospital system.

In fact, when public hospitals were mentioned they seemed like a thing of dread, the downmarket half of “our very successful private/public system”.

But first, the good:

The program was a shared project of Four Corners and the Radio National Health Report, with Dr Norman Swan as the main interviewer/presenter. Apparently hundreds of listeners responded to a call-out for hospital bills, many with stories of significant out of pocket costs.

Carried by the stories

Through the stories of three articulate and thoughtful patients, the program highlighted the dilemmas faced by many Australians who find themselves in need of surgery: the desire for a good outcome at the soonest available opportunity, a lack of information about how to transact the complicated financial side of medical treatment, and vulnerability and a lack of agency when dealing with doctors, private hospitals and private insurers.

“It shocks you,” said a man who had undergone robotic surgery for prostate cancer. “You live in this world where you have Medicare, a universal health fund. You’ve got a private health fund and, lo and behold, you’re 18 grand out of pocket when you have one operation.”

The bulk of the program was about an unknown minority of surgeons (anaesthetists and others were mostly off the hook) who charge exorbitant fees that are out of step with others in their field, and fail to properly inform patients, leading to “bill shock”, excessive out of pocket costs, and hardship.

Fee gouging is an important issue, which everyone – including the AMA, the specialist societies and private health funds – agrees must be addressed. Its overall contribution to to out of pocket health costs is unknown.

Dr John Batten, President of the Royal Australasian College of Surgeons, spoke strongly and credibly when he denounced rogue surgeons who charge excessive fees, and vowed that the College would do something about it. The RACS has asked patients with any concerns to complain directly to them, and has not ruled out removing fellowships from transgressors who do not abide by the ethical principles to which the College aspires.

There were some good messages for patients, including that excessive fees are not a mark of quality. This was spelled out by several of the experts interviewed, which was a good thing because Norman Swan also tried to explain it from the driver’s seat of a shiny red Holden Commodore, in an attempt at metaphor that was a bit distracting (a Commodore is a Commodore and is has blue tooth and alloy wheels – maybe it’s a man thing).

Patients were advised to seek second opinions about treatment and probe costs. The segment on prostate cancer management seemed like a bit of a digression but was useful on its own, given that the management options must be difficult for most men to understand in the contested spaces between surgical, medical and radiation oncology.

The program also tried to achieve balance by exploring the more usual situation of cumulative gaps for multiple tests and episodes of care, which become huge when added up. The last patient, who had undergone bilateral mastectomy and reconstruction as a single procedure in a private hospital, was able to furnish the ABC with 32 separate bills, totalling more than $29 000 (a gap of $16 000).

Taken for a ride?

My unease with this program was that a lot of it seemed to involve being taken for a metaphorical ride in the shiny red car (I never did work out if the car was bad or good) by the private health care industry.

“The cowboys that are out there that are charging very high gaps without justification are having a negative impact on the whole of the private health sector.”

With that segue, the patients’ woes took a back seat for the middle part of the program, during which we were supposed to worry about the private health and insurance sector.

Health economist, Professor Stephen Duckett pointed out, quite logically, that the onus should not be on private health insurers to meet fees that are excessive with no cap:

“It’s almost impossible for an insurance company to set a premium that covers whatever some doctor charges.”

Terry Barnes, a health policy consultant, went further, saying private health funds were the convenient bad guys, “as popular as a fart in a lift”.

When the scene changed to a group of young surgeons attending their convocation ceremony at the Royal Australasian College of Surgeons, I thought the program had moved on to another topic. I was wrong.  With the candidates’ faces cast in a blue-light shadow, it was the program’s film noir moment.

“This is the culmination of up to 15 years in training. It’s been hard work,” said the voice-over, “and the majority of these young surgeons will rely on private patients for most of their income. Some may be sorely disappointed because, thanks to the rapacious behaviour of some of senior colleagues, private patients may not be around in their current numbers.”

And so it continued, with Dr David concerned about a loss of confidence, and a recent decline in participation, in private health insurance, the AMA’s spokesperson, Dr Gino Pecoraro lamenting empty beds in private hospitals and more available theatre time, and a cameo from Michael Roff of the Australian Private Hospitals Association, saying it’s too early to be sure but there is a “softening” in the market.

Some suggestions, many questions

The program went on to round out the patient stories with some good discussions about why healthcare can’t be a free market when consumers don’t have enough information, excellent observations from the patients on why fee disclosure is so opaque, a directive for all fees to be specified before the first clinical encounter, insights into the psychology of doctors and fees (some might overcharge to show how good they are, and so publishing fees might have the opposite of the intended effect if some doctors decide to catch up).

There was also an extension of the car metaphor to include a Ferrari (no Ferrari put in an appearance, but the gist was that you might pay for a Ferrari and get a Commodore).

The Chief Medical Officer, Professor Brendan Murphy signalled the determination of the out-of-pocket costs Ministerial Advisory Committee to deal with the problem:

This small group of doctors behaving in this egregious way may potentially disrupt the very successful private/public model that we have in this country. Doctors have to own the solution. And every member of that committee – the AMA, and Specialists Societies – is absolutely unanimous in us needing to do something.”

But a press release today from the Australian Healthcare and Hospitals Association reiterated concerns about who is represented on the out of pocket committee. CEO Alison Verhoeven said:

…the Australian Government would benefit from including more consumer and patient organisations on its review committees if they want to know first-hand the impacts the current system is having on ordinary Australians.

The current out-of-pocket costs review committee is totally dominated by doctor organisations, private health providers and private health insurers—the very people who benefit most from leaving the system as it currently is.”

It’s unrealistic to expect a 45-minute television program to illuminate all the issues contributing to out of pocket costs for healthcare but, in my opinion, this episode of Four Corners started with the skewed premise that private health insurers, private hospitals and other corporates are passive victims in the rising tide of health costs—that escalating healthcare costs are the fault of a small group of rogue doctors, rather than entrenched systemic issues.

There’s something deeply disturbing about seeing young surgeons entering the profession, and only being invited to ask ourselves how they will benefit from private medicine.

I think most of them would agree that there are better questions we can ask:

How will Australians benefit from their skills and training while they lead purposeful, rewarding careers?

How can we match need to care?

How can we afford the best health system that serves us all?

How can we address the systemic inequities that are entrenched as a result of the public largesse supporting the private system?

Four Corners is rightly known for its fearless, high quality public interest journalism but, in this program, I can’t help but think that private interests were better served.

As the private system and its out-of-pocket costs and confusion continue to run away from us, we reiterate our call for a Productivity Commission review of the health system, including an appropriate and affordable balance between private and public healthcare that is patient-centred rather than provider-centred.”

The Consumers Health Forum of Australia made a similar plea.

A slavish mandate to protect the private health system will not aid in the endeavour to create an affordable, equitable, high quality health system. Achieving such a system will take open minds, inclusive consultation and political courage.

***Croakey spoke to Dr Norman Swan about these concerns before posting.

He said there were several other issues he would like to have covered, including stories from patients with “junk policies” (none were received in their callout), and issues with the Medicare freeze and items with inadequate rebates. The program took its direction from the three patient stories they chose to tell.

While a piece to camera had been recorded at a public hospital in which he talked about the competitiveness of the public sector, this was not able to be included in the final cut.  He said that the program was unapologetically focused on the private sector, which was something not typically covered by the ABC.

“The reality is, we have a private sector and we rely on it. I wanted to talk to some of the players.”

The Consumers Health Forum of Australia

Royal Australian and New Zealand College of Obstetricians and Gynaecologists

Report from the AMA conference in the Sydney Morning Herald 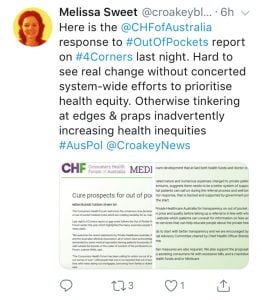 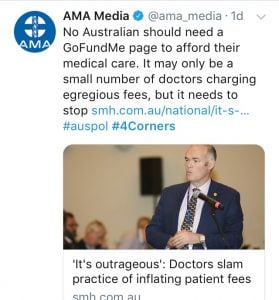 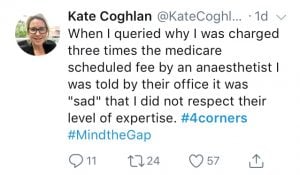 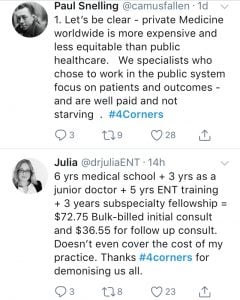 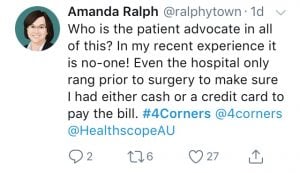 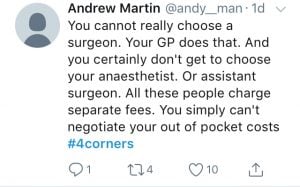 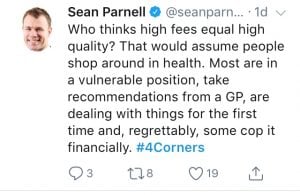 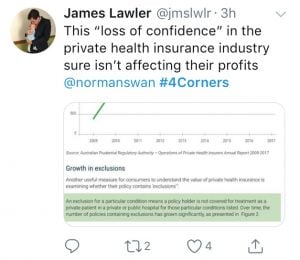 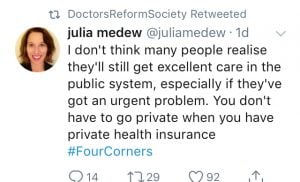