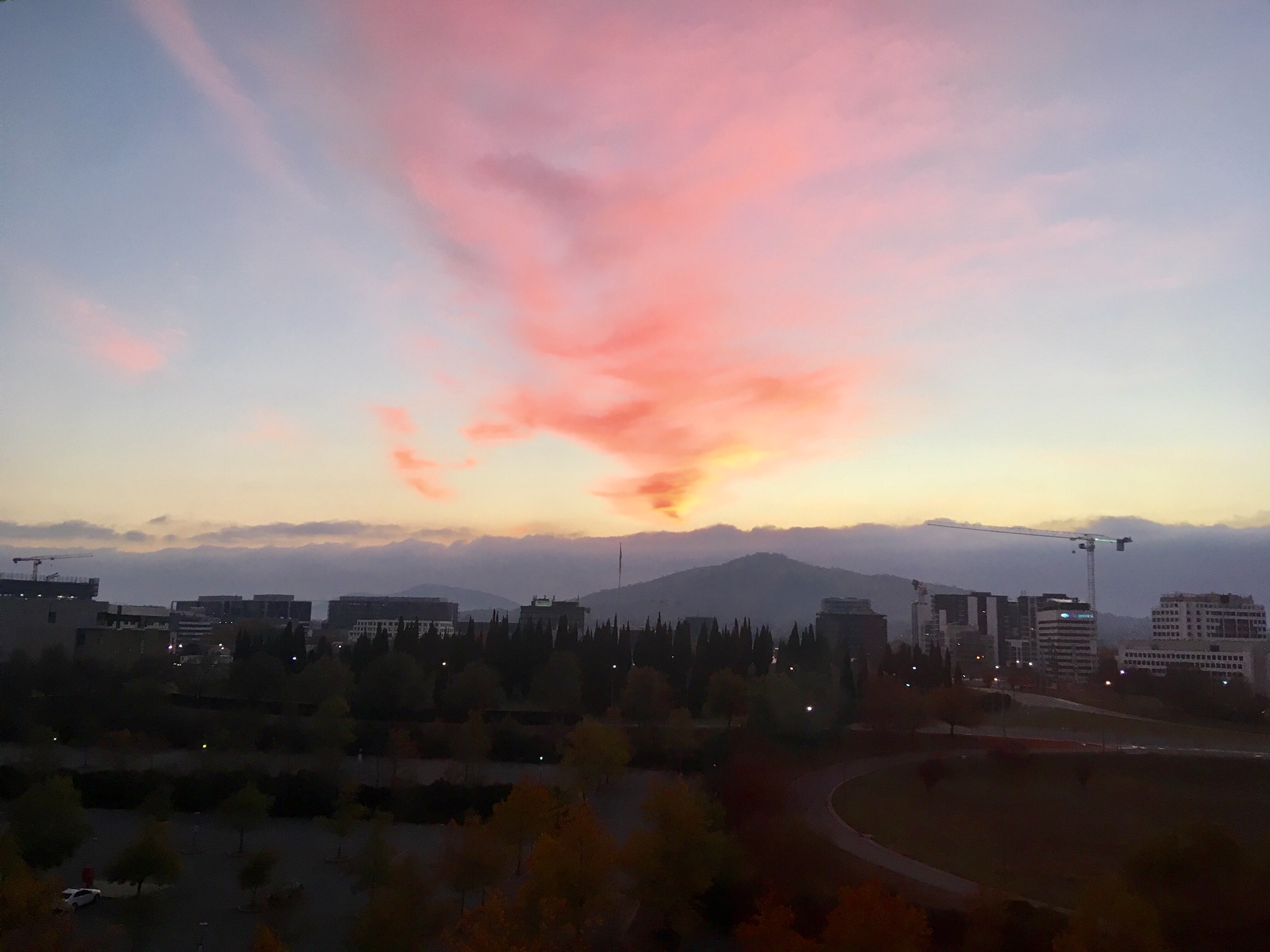 Introduction by Croakey: We’re only three working days out, but there has been plenty of reaction to Saturday’s federal election outcome, which contradicted the results of polling and returned a Coalition government with Scott Morrison as Prime Minister.

Financial markets  have surged, the value of shares in private health insurance has increased, and Clive Palmer, not content with depriving the country of yellow ink, is claiming victory in his efforts to stop the election of a Labor government (and sure up the future of his proposed coal mine).

All that aside, health and social welfare organisations did a great deal of work before the election, highlighting policy, funding, program and other gaps that they are keen to work with government to fill.

Some of it was collated by Croakey here, showing widespread support for efforts to improve Aboriginal and Torres Strait Islander peoples’ health, and to address climate change and health inequities.

When the election result was not as expected, it was Indigenous voices on Twitter who led the way with resilience and pragmatism, as illustrated by a selection of these tweets below. 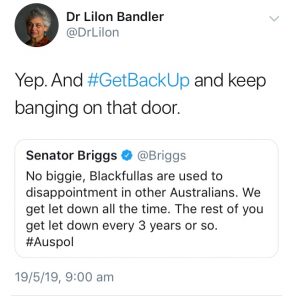 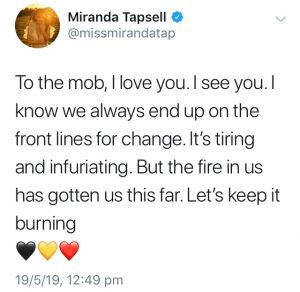 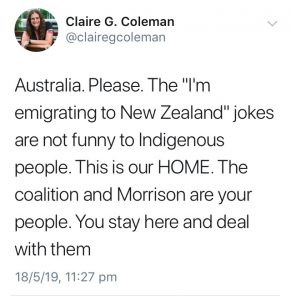 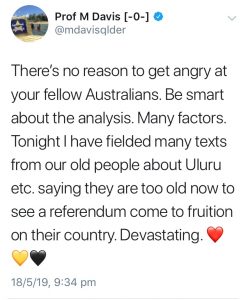 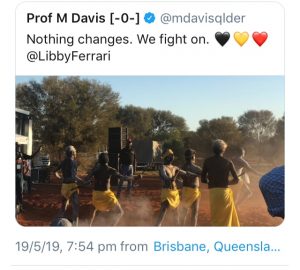 So how good are Australians? Good enough to work together and with the government of the day, to improve health?

Croakey will continue to bring you analysis as new plans for policy and leadership become clearer, but below are some early responses.

CEO of The National Aboriginal Community Controlled Health Organisation, Pat Turner, spoke on the ABC News Channel on Monday. You can view the interview – now featuring at the Croakey homepage and in our archive of recommended public health viewing – and other NACCHO coverage here.

Turner congratulated the newly elected Government and said she hoped that the Parliament would take a bipartisan approach to dealing with all matters for Aboriginal and Torres Strait Islander people.

She also thanked the Labor party for all the hard work they did in putting forward their policy platform which “unfortunately the Australian people decided they weren’t ready to take on”.

“Regardless of the election result,” Turner said, “we need a radical rethink by governments  regarding the way they work with Aboriginal and Torres Strait Islander people.”

Turner said NACCHO was grateful for Scott Morrison’s leadership on closing the gap.

We need to see the colour of the money and I’m hoping that the Prime Minister will announce that very soon.

We also urge all the state and territory governments to work with us on a collaborative basis, to ensure the self-determination of our people is given legs.”

Turner said self determination had been a policy since the early 1970’s but that infrastructure and support for Indigenous systems of government  “to ensure our cultural values remain, our languages remain and our culture is strong” had not been forthcoming:

The resources need to be directed at the Aboriginal communities and through Aboriginal controlled organisations.

The old way of doing things and business as usual are over. Scott Morrison has the mandate to ensure that he takes on our advice.”

She also said the days of government appointed advisory bodies were over:

Aboriginal people need a real say in who they want to speak for them.

The community controlled organisations should be respected, and have a seat at the negotiating table, making sure the decisions are made in partnership with us.”

Turner said there were more than 40 organisations in the Coalition of National Aboriginal and Torres Strait Islander Peak Bodies and that they were “extremely united” in their efforts to close the gap.

We came together because we were devastated over the past.

We would like the 500 million dollars taken out of the Aboriginal Affairs budget by Abbott and Hockey reinvested in Aboriginal community control.”

She said the states and local government also need to be more accountable for the programs they are responsible for.

We are always accountable as Aboriginal people and we will continue. We want the responsibility and we have to be given the role, to play it.”

Turner thanked Scott Morrison for his commitment to ending youth suicide and invited him to visit one of the high risk areas to meet the people on the ground and “make sure we really hear from our communities how we can overcome this tragedy of youth suicide.” 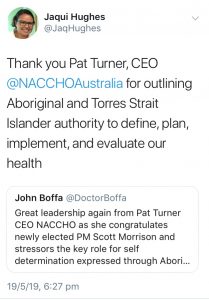 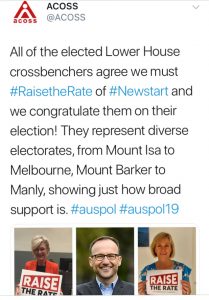 The Australian Council of Social Services (full statement here) congratulated the Coalition on its re-election and said it would work with government to support people in need and to tackle the changes we face as a country.

The economy is fragile and the climate crisis is impacting people, our regions, the economy and the environment.

More than 3 million people across Australia are struggling, especially women, to make ends meet and keep a safe secure roof over their heads. Employment is uncertain for millions, including young people, older people, and people in regional areas.

We urge the Morrison Government to work collaboratively across the community, with First Nations leaders, the community sector, the union movement, business groups and regional groups to find the common ground that will deliver the solutions for a fairer sustainable future.

She urged Mr Morrison to reach out to First Nations leaders as a first priority, then reiterated the need, and widespread support, for an increase in Newstart – support that includes that of crossbench members of parliament.

Lifting Newstart is exactly the right policy we need now to bring the community together and exactly what the economy needs right now in the face of concerns of an economic downturn.”

Goldie promised that ACOSS would continue working to increase Newstart and address the housing affordability crisis, warning resources were needed to address the climate crisis, and that the government’s planned tax cuts would be “a huge change and fiscal risk.”

The community sector is committed to working with the government to guarantee essential services we all need, and to ensure that as a country we are up to tackling today’s challenges together.”

The Australian Healthcare and Hospitals Association 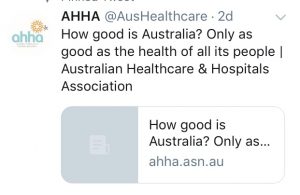 Last night, the Prime Minister asked how good is Australia, and in our view, the answer is that it can only be as good as the health of all its people.

Large, structural reforms are needed to deliver better healthcare access and affordability for all Australians.

We can no longer reward service volume when we need to shift the whole system to value-based healthcare—that is, better outcomes for patients relative to costs. Simply throwing new money at old problems will be doing current and future generations of Australians a disservice.”

She invited the Government and the incoming Health Minister to engage the with the work of AHHA’s recently established Australian Centre for Value-Based Health Care, citing out-of-pocket costs, private health insurance subsidies, and  coordination of services as important areas for investigation.

While applauding the Coalition’s commitment to invest in mental health, including to address youth suicide, Verhoeven raised equity issues, such as for Indigenous people.

The particular needs of young Aboriginal people must be part of this investment.

The national tragedy of Indigenous youth suicide rates clearly tells us we have a long way to go before we can answer positively to the question, how good is Australia?”

She pointed to poor progress with the Closing the Gap strategy.

The Coalition must act urgently and decisively, and in genuine partnership with Aboriginal and Torres Strait Islander peoples.”

Other areas with equity gaps, she said, included access and affordability of health care in rural Australia.

In the lead up to the election, the Government had little to say on oral health, the health impacts of climate change, and prevention. Ignoring these issues is not in the best interests of Australians.”

Dr Simon Judkins, president of the Australasian College for Emergency Medicine (ACEM) released a short statement acknowledging the Coalition’s win and urging the returned Morrison government to ensure health policies continue to focus on better outcomes for all Australians. He said:

Our major concern is vulnerable populations who seemingly are left behind. We strongly advocate for a robust public health and public hospital system. Our health care needs to remain universal and accessible.

We need to ensure our health policies support this vision and not contribute to a two-tiered system and two-tiered outcomes.” 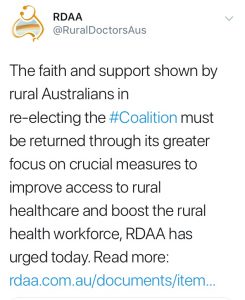 The Rural Doctors’ Association of Australia’s President, Dr Adam Coltzau (full statement here) encouraged the Coalition “to return the faith and support of rural voters,” and said RDAA was looking forward to working with them to progress key rural health initiatives.

These include the rollout of the National Rural Generalist Pathway – to deliver more of the next generation of doctors with extended skills to the bush – and further rollout of the Coalition’s Stronger Rural Health Strategy and National Medical Workforce Strategy.

There is much to be done in boosting access to healthcare in the bush, and we are looking forward to continuing to work with the Coalition to ensure this is delivered.”

He said big picture initiatives were needed and included:

We also look forward to working with Labor, the Greens and others in delivering a better deal for rural and remote Australians in the parliamentary term ahead.” 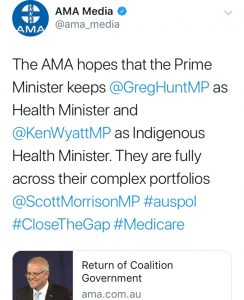 Australian Medical Association President, Dr Tony Bartone (full statement here), said the AMA stood “ready to work with the Government to strengthen the Australian health system and set it up to meet the needs of our growing and ageing population.”

He said the AMA was keen to help with the “unfinished business” in the Coalition’s health reform agenda, including primary care and general practice, bedding down the private health insurance reforms and supporting and maintaining the integrity of the private health system and its symbiotic balance with public hospital.

He advised that Greg Hunt and Ken Wyatt continue their roles as Health and as Indigenous Health Ministers respectively:

There is plenty to do. There are clear consultative processes in place to ensure we can get straight back to the business of investing in the health of all Australians.”

Dr Bartone also acknowledged the “significantly bold health platform” Labor at the election, and offered commiserations to them on the election outcome.

Bill Shorten was consultative and constructive in our dealings with the Opposition, and the AMA wishes him well following his decision to stand down as Labor leader.”

The Pharmacy Guild of Australia

The National President of the Pharmacy Guild, George Tambassis (full statement here), said the election win would help to provide greater certainty for community pharmacies and their staff at a time when community pharmacies “are facing a very tough operating environment and certainty is crucial to their ability to continue meeting the ongoing health needs of the communities they serve.”

This year we are entering negotiations for the 7th Community Pharmacy Agreement, an agreement which will shape the future of the sector and the pharmacy profession.

Our strong and respectful relationship with the Coalition will be central to ensuring the best outcomes for health consumers and the pharmacy profession are achieved in the 7th Agreement.”

He said the Guild looked forward to the announcement of the new Cabinet and to working with Minister Hunt and the new ministers in all areas including health, aged care and rural and indigenous health.

I won’t be engaging in the recrimination n despair on Twitter today. Our job, all of us is to turn it around. Acknowledge all the powerful work that’s been done & build on it. For my younger friends, allies & colleagues 3 years is not so long, long enough to plan, execute & win. pic.twitter.com/EGJTg2YvwS