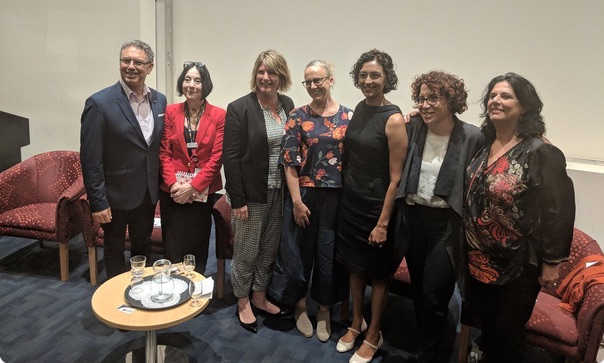 Health professionals and their organisations, including medical colleges, have a moral, ethical and professional duty to speak out against the “institutional cruelty” being perpetrated on asylum seekers and refugees by the Australian Government.

That was a clear message from a grand round panel event hosted by the Royal Women’s Hospital in Melbourne last Friday, with senior clinicians urging stronger action and greater unity across the health sector amid hopes that the country is reaching a “tipping point” on the issue.

Medical colleges were also urged to step up to provide strong institutional support for individual members – doctors, nurses, midwives and others – who take on often risky “whistleblower” roles to highlight grave concern for asylum seekers and refugees suffering in offshore detention on Nauru and Manus, and in Australia.

The packed event brought together nearly 200 health professionals, including senior representatives of the Australian Medical Association (AMA) and medical and midwifery colleges to discuss how they and the broader sector can practically, legally and ethically advocate for asylum seekers and refugees.

It sparked ongoing discussions over the weekend on Twitter via the #healthadvocacy hashtag, generating nearly 10 million impressions so far, and calls for doctors in particular to make the most of their political influence and the trust they enjoy in the broader community.

I think we all came away with a mindset changed from ‘I want to do something but don’t know what or how’.. to ‘I now realise my power and I know how to make a difference’.”

The event was also timely, serving as a rallying call to the health sector ahead of the proposed introduction today of legislation by new Independent MP Professor Kerryn Phelps and of the release by Médecins Sans Frontières (MSF) of Indefinite Despair, which says the mental health suffering on Nauru is “among the most severe MSF has ever seen around the world, including in projects providing care for victims of torture”.

Phelps’ Urgent Medical Treatment Bill seeks the immediate transfer of the remaining children and their families from Nauru and to streamline urgent medical transfers for adults on Nauru and Manus, scrapping the existing provision of ministerial veto.

Opening the panel discussion, Professor Louise Newman, a psychiatrist, Director of the Centre for Women’s Mental Health at the Royal Women’s Hospital and convenor of Doctors for Justice, said:

The core issue for me is we have both a moral and ethical imperative to speak out on these issues.

Remaining silent in the face of obvious human rights violations is a particularly dangerous position to take.”

Newman said every woman from Nauru whom she had treated had experienced sexual assault.

“I think history tells us a lot about being a bystander to gross abuse and we have I think that key role, even if we can’t change things immediately, in bearing witness, in documenting, in researching, [and in] highlighting the damage of detention.”

Newman initially planned the Royal Women’s Hospital final grand round for 2018 as a presentation on perinatal mental health and refugees and asylum seekers.

However, convenor Dr Rebecca Szabo, an obstetrician/gynaecologist and medical educator, said it was refocused as a broader panel discussion on the role of the health profession in advocacy due to a recent “surge of interest” in the plight of asylum seeker issues.

That’s included the #kidsoffnauru campaign, and an Open Letter to Prime Minister Scott Morrison that attracted nearly 8,000 signatures from doctors and other health workers and was backed by major health and medical groups.

The AMA has also recently stepped up its criticism of offshore detention under new president Dr Tony Bartone and Phelps’ election as the Member for Wentworth also put the issue on the agenda for the Morrison minority government.

“We have finally got sufficient critical mass of medical practitioners and other groups agitating for change and we’ve all come to the conclusion that obviously the continuing institutional cruelty that’s being perpetrated on both Nauru and Manus has to end,” he said.

Rait told Croakey the AMA had seen Phelps’ draft bill. While he was sure the medical profession would support it, the key question was whether Labor would.

He said it was very clear that health professionals and groups were going to have to “step up our advocacy” over the next week or two to make sure the legislation gets through, although he signalled it may be subject to some changes to the draft.

Bioethicist Associate Professor Deborah Zion, Chair of the Victoria University Human Research Ethics Committee, has no doubts that Australian health professionals have a collective responsibility to speak out for asylum seekers and refugees.

Like many others at the Melbourne event, Zion said her position on asylum seeker issues had been shaped by her family background, particularly three aunts who had survived the Dachau and Auschwitz concentration camps.

Zion has interviewed health care providers working in Australian immigration detention centres for the past 15 years, with a focus on how they confront dual loyalty issues – strong duties they wish to fulfil for those in their care that is hampered by their positions as employees of the state, which has sought to gag them from speaking out.

Many still have spoken out but have paid a very high cost, she said.

This was one clear area where “very empowered” medical colleges could make a real difference, by providing strong institutional support for those members who need to speak up and making sure that message was heard politically, she said.

“I don’t think it’s reasonable that this burden should fall solely on brave individual people. That’s something that can be done and could make a huge difference.”

Listen to an interview with Zion here.

It is very difficult for clinicians as individuals to stand up and fight that fight and be the whistleblower.

I think we need to give them that institutional support and we need to be advocating, being the voice for their concerns, (and) not just for refugees, there are a lot of things we can do better to give voice to individual clinicians.”

The forum also heard differing views on whether medical practitioners should work within the detention centre system.

Professor Louise Newman said she had resolved not to do so because she did not want to “prop up a system when…prolonged mandatory detention is actually the thing that damages people,” she said. “The answer is to overhaul the system.”

However, human rights lawyer Professor George Newhouse, principal solicitor of the National Justice Project, said the medical reports and examinations of “many good doctors and other clinicians” had been vital in strategic litigation that has resulted in 130 people, including 50 children, being removed from Nauru in recent years.

“I don’t have a black or white position but I can tell you the lives of children and adults have been saved by good people within the system writing notes, writing reports, pleading for help or even whistle-blowing to ensure the information got out to the public so individual lives can be saved,” he said.

Janakiramanan also talked about the momentum built since by teams of doctors and other clinicians, who were peppering MPs with letters, and of a local campaign by doctors in South Australia, which had headed off the closure of a sexual health clinic.

“Doctors are realising our voices are important and we can work together to bring about genuine political change,” she said.

Blackburn talked about the 32 million women and girls currently displaced across the globe. They experience high rates of sexual violence, of pregnancy complications and of unwanted pregnancies because of interrupted contraception and sexual violence, she said.

These experiences and other health issues faced by women and girls who come to Australia under the humanitarian assistance program point to the need for more cultural competence in the Australian health system, she said.

After the forum, Newman said she took great hope from the opportunity it had provided to pull together passionate people and key health profession and medical groups, and that it highlighted the need to not only speak up but to be politically savvy.

There will obviously be different opinions about political strategy but there was a consensus that things need to change and also a very clear message … that it is an ethical and moral responsibility to have a view on these issues.

Our treatment of these very vulnerable people is one of the greatest moral issues of our time.”

• Watch video interviews from the event via this playlist link, compiling six interviews with a total of 2,076 views on Periscope as of 3 December 2018.

• With thanks to Szabo and Dr Sonia Fullerton, you can also watch most of the panel discussion via the Periscope app, which has had more than 2,000 views to date – search on Twitter or Periscope for  @SoniaLF to access this. 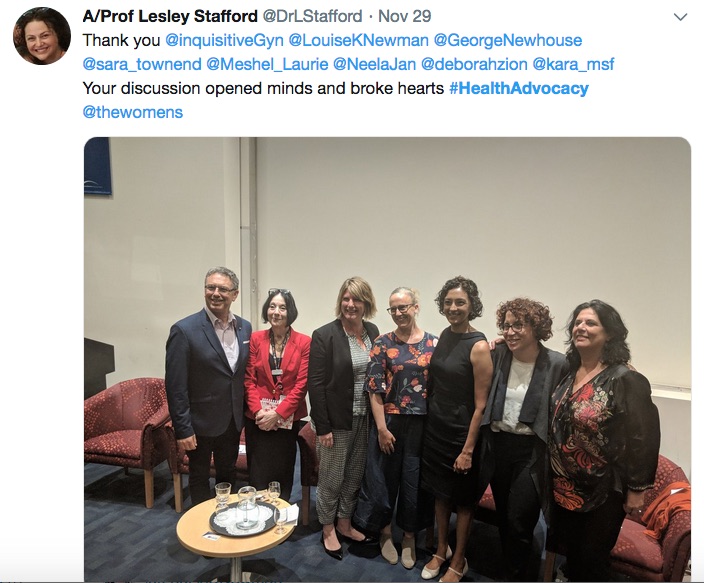 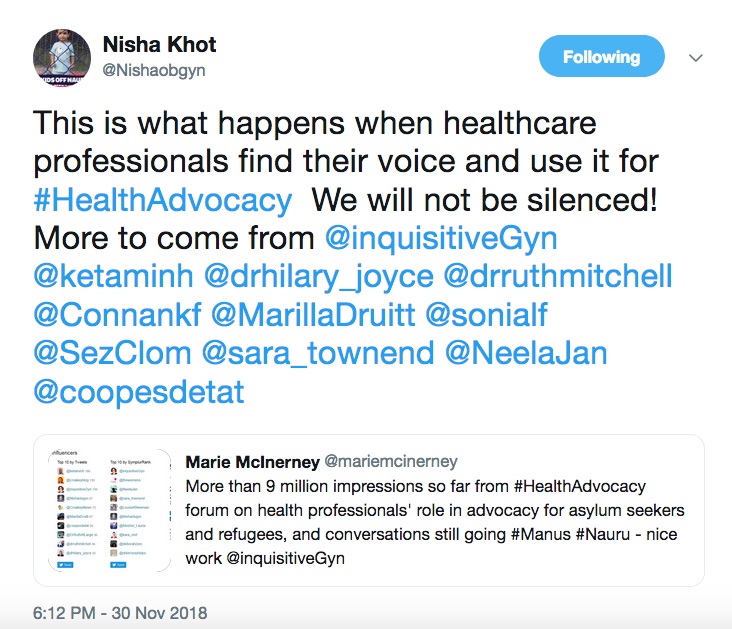 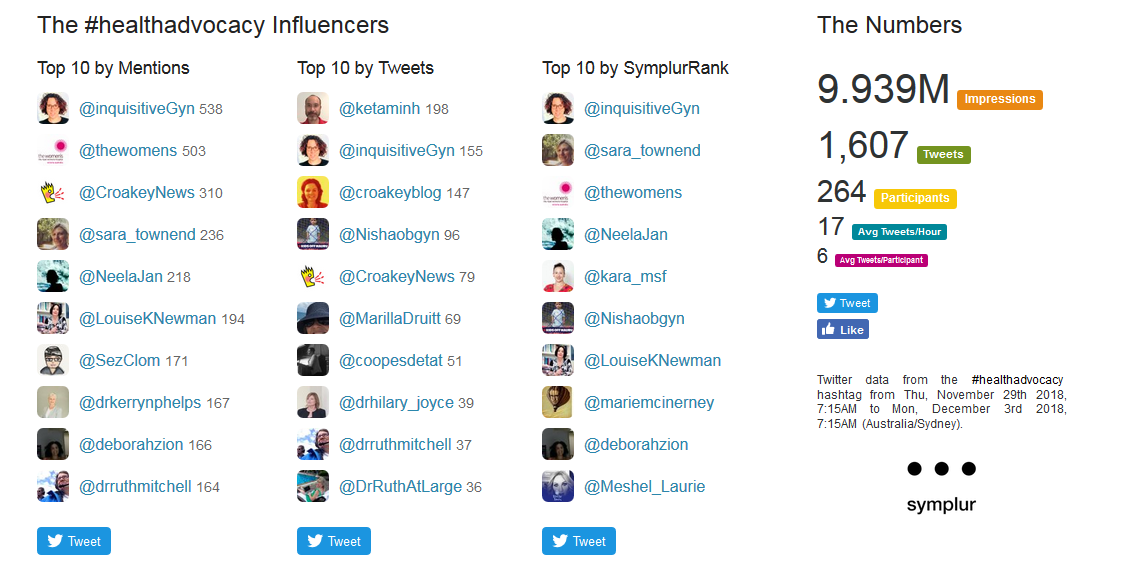 • Declaration: The Royal Women’s Hospital paid for Marie McInerney to live-tweet the event and conduct Periscope videos on Friday for Croakey Conference News Service. The writing of this article is funded through Croakey’s editorial budget.