Home Public health and population health Health in All Policies Healthy urban planning: why is it so hard to achieve, and what might help? 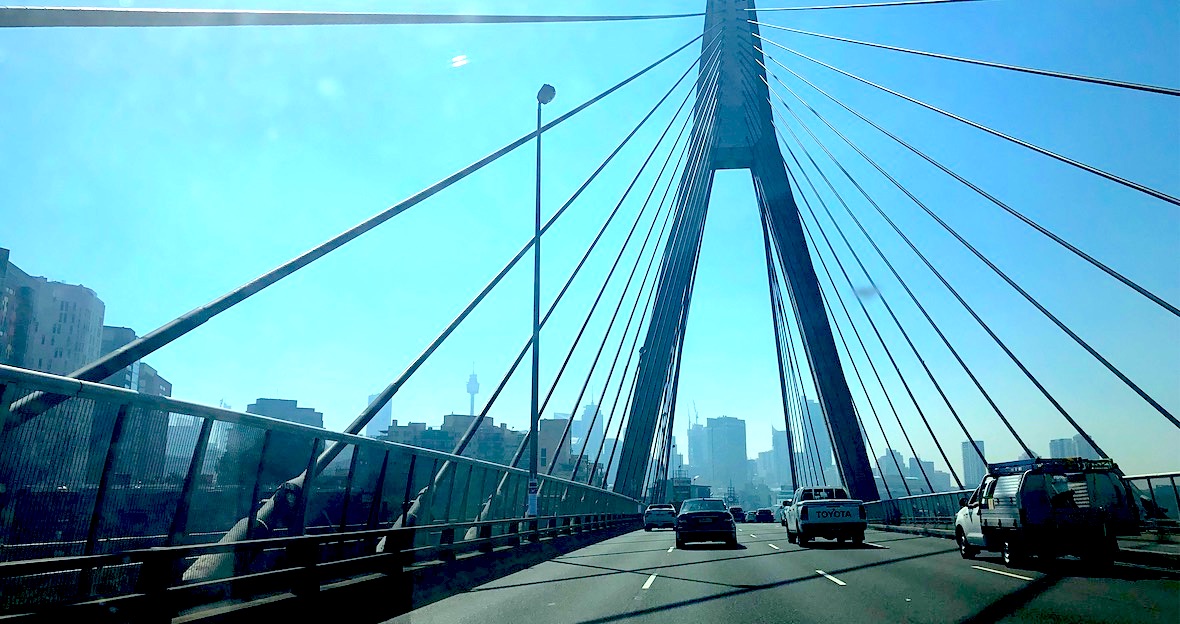 On the road in Sydney, where is the vision for healthy planning? Photograph by Melissa Sweet

Healthy urban planning: why is it so hard to achieve, and what might help?

Introduction by Croakey: When Prime Minister Scott Morrison recently told a Business Council of Australia dinner of the Government’s plans to bring forward infrastructure spending, it’s a safe bet that he did not field any questions about the likely health impacts, whether from BCA members or journalists.

Yet, infrastructure and other urban planning decisions have profound consequences for the health of communities, especially at a time when there is increasing focus on the importance of infrastructure in reducing greenhouse gas emissions.

So how can health concerns be put on the agenda?

For the past several years, University of Sydney researcher Dr Patrick Harris and colleagues have been investigating this question, using case studies in New South Wales and South Australia. The article below concludes with four key suggestions for how to achieve healthier planning.

The past two decades have seen an upswell of interest in and evidence supporting urban planning as a determinant of health.

However, there remains little understanding in health circles of how urban planning works as a sector. That understanding is a necessary precursor to effective action to create cities that support, protect and promote health and wellbeing.

To that end, this article overviews research I conducted with colleagues over the past seven years.

We investigated the New South Wales land use planning system, with a Sydney focus, between 2013 and 2018.  Additional research looked at other jurisdictions, particularly Adelaide, South Australia.

This was a tumultuous and exciting time for Sydney on the back of ongoing major reforms and unprecedented – billions of dollars – investment in urban infrastructure. Sydney is an excellent example of cities globally facing massive planning challenges due to rapid population growth.

We focussed on the essential policy functions of the planning system from a population health perspective (ie we were interested in the system’s impact on populations, not individuals): legislation, strategic planning, and very large ‘state significant’ infrastructure projects.

We undertook interviews with more than 100 people ranging from Ministers to affected community members, analysed more than 200 documents, and applied theories from political science and urban politics to better explain findings.

Between 2011 and 2014, the NSW Government undertook reform of the legislation and system governing planning.

These reforms provided the opportunity for a specific, ‘health’ focussed guiding objective where there had previously been no reference to health at all.

We first interrogated submissions to the various reforms to understand how ‘health’ was being referred to. Only a small group of health advocates really suggested that ‘health’ was important to the reforms, we found. For everyone else, ‘infrastructure’ was fundamental.

Given no one really cared about health outside that select few, we then investigated how the health objective came eventually to be included.

Almost everyone we interviewed – whether they were ministers, bureaucrats, or advocates ­– claimed personal responsibility for the success.

What actually occurred, we discovered, was more complex and interesting.

The same core group of health advocates, many of whom had been pushing the importance of healthy built environments for nearly a decade, went to extraordinary lengths promoting the health objective.

They quietly and strategically developed a broad network across government, industry and non-government to promote support for the objective, or at least not to oppose it.

Towards the end of the reforms the window for influence finally opened. The Government was searching for a good news story as their ‘jobs and growth’ agenda was failing to gain public support.

The health objective was included in the draft legislation tabled in parliament. Ultimately, however, the lack of public support meant the legislation was not passed.

The Government subsequently amended the legislation having learned the lessons from the previous attempt, but without including the explicit healthy built environment objective. There is, however, an objective about ‘place-based planning’, and its supporting policy has human health as its first overarching goal.

In other words, the advocacy was successful, but ultimately resulted in the compromise of health as a supporting consideration rather than an objective.

This ‘wins with caveats’ continued at the strategic planning layer of the system, which we investigated next.

In 2014, just as the reforms were failing, the NSW Department of Planning put out a Metropolitan Strategy for Sydney.

Influenced by the legislative health advocacy work, the Plan included ‘healthy built environments’ as a specific strategic direction. Despite the rhetoric there was no meaningful mechanism to make this work.

At the same time, a new Planning Minister, Rob Stokes, came on board who put in place opportunities to radically alter the system’s policy focus and capability.

The place-based policy agenda was articulated and the Greater Sydney Commission (GSC) was established. As we went on to show, crucially for population health the GSC had twin fundamental tasks: re-working the Metropolitan Strategy and delivering infrastructure.

The GSC’s new raft of strategic plans (which took almost three years to finalise) pulled economic development rhetoric down a peg to become ‘Productivity’ alongside ‘Sustainability’ and ‘Liveability’.

This potential to link population health as a goal for the city has yet to materialise. Instead, infrastructure coordination was the defining strategic city problem, emphasising ‘health precincts’ built around hospitals as major employers, rather than positioning the health of the population as core for the growth of the city.

Health advocacy was and remains part of the problem. Essentially the health messaging did not adjust or fully connect with the opportunity presented by the GSC and others to deliver infrastructure via a place-based approach across varying layers of the city: the city itself, precincts, and buildings.

Liveability has more potential. Our comparative research with South Australia showed that liveability can address the social determinants of health at local levels while simultaneously branding a city or region as globally or economically competitive.

However, we also found the overt positive spin that comes with ideas like liveability has to be tempered with a concern for equity. Equity requires a less politically palatable requirement for the largest capital investment in infrastructure investment to be made within the most disadvantaged urban regions.

The Western Sydney City Deal (a paper on which is currently under review) is providing important lessons about how best to leverage equitable infrastructure investment for a disadvantaged urban region.

The repeat finding from our research was that infrastructure is crucial to the health of a city. Our next study interviewed leading infrastructure policy makers nationally about what health meant for their infrastructure work.

Most saw its value but questioned its relevance to the essential purpose of infrastructure, which is facilitating the economy.

Politics also gets in the way.

Once politically agreed upon, the main information to support the planning focusses on the financial risks and benefits. Other ‘externalities’ like liveability or sustainability struggle to be included.

There is, however, hope. Our paper was set against the backdrop of the United Nation’s sustainable development goals, arguing that this is the framework from which to improve infrastructure planning for the public interest.

Fast forward to 2019 and Infrastructure Australia’s ‘Infrastructure Audit’ argues ‘quality of life’ is the main challenge facing infrastructure, and positions the SDGs as the planning mechanism to achieve that.

‘Health’ remains under the radar, but this policy recognition is a win (with caveats), nonetheless.

The additional stream of research focussed on the environmental assessment (EA) of very large mega-infrastructure projects. EA was chosen because this provides the clearest, regulated, point to have health issues considered and then detailed in the subsequent Environmental Impact Statement (EIS).

We first interrogated transport EISs, which amount to several thousands of pages, for Westconnex, NorthConnex, The Sydney SBD Light Rail, and the Darlington Road in Adelaide.

Our analysis showed health was insufficiently considered relative to the known health impacts of transport. When health was included, this largely focuses on air quality impacts, with the EISs predicting that a project was not going to impact, or was going to improve, air quality.

Asking why this limited coverage of health occurred was revealing and depressing for three principle reasons.

The EA process is fundamentally concerned with approving a project. Health is not required under legislation (overtly anyway, with the new place-based objective under-utilised to date). The result is that a broad definition of health is seen as adding an unnecessary layer of complexity.

The NSW Department of Health tends to advise that EAs focus on health risks to air quality above all else. When these very large projects are subsequently approved rather than challenged, the community distrusts the data used to inform the health risk assessment.

EISs insufficiently capture population health impacts because legislation means they focus on single projects, or even specific project stages, ‘in the locality’. This local scope means it is difficult to link either decisions to approve projects or the subsequent conditions of approval to population health concerns like social equity or climate change.

Overall, we found that EA/EIS is a necessary but insufficient and very late point in planning for engaging about population health issues.

This finding was subsequently supported by two parliamentary inquiries, one into WestConnex and the other the Sydney CBD light rail. The WestConnex inquiry was particularly damning, recommending that health ‘be included in early options appraisal processes for all infrastructure projects’.

The NSW Government response was underwhelming and obfuscating. Because health is considered in EIA, the response argued, and EIA ‘complements’ the business case behind projects, the inquiry’s recommendation is unnecessary.

The satirical TV show Utopia could not have scripted a better response.

To conclude, our research has added a sophisticated understanding about the realities of land use planning for a health audience.

Land use planning will always be fraught and contested. These contests fundamentally turn on whether planning should be a vehicle for neoliberal competition and economic growth or wider concerns about the people or environment that cities impact upon.

To position health as valuable for those contests:

• Dr Patrick Harris is a senior research fellow at the Menzies Centre for Health Policy at the University of Sydney until the end of this year. He is currently writing a contracted book about the research covered in this article, due in early 2020. He is also looking to take on new work ventures – if you like this article and have work opportunities coming up, please contact him at patrick.harris@sydney.edu.au, or via Twitter @pharrismusings. Also contact him if you have trouble downloading articles cited in this piece. Patrick would like to thank the following close collaborators: Peter Sainsbury, Emily Riley, Fran Baum, Sharon Friel, and Jen Kent.