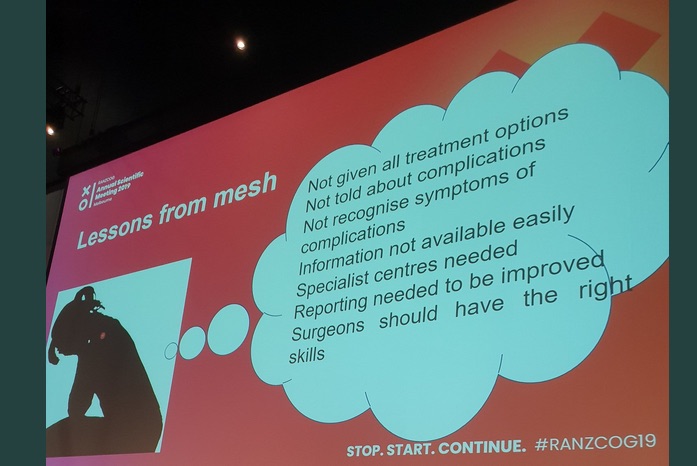 Heed the lessons from the pelvic mesh scandal

This article was first published on 1 November, 2019.

A leading medical specialist has called for a paradigm shift to stop harmful commercial influences on clinical practice in the wake of the pelvic mesh scandal.

Dr Ranee Thakar, president of the International Urogynecological Association, urged gynaecologists to learn the necessary lessons from the mesh controversy that had engulfed their specialty.

In an address to the Royal Australian and New Zealand College of Obstetricians and Gynaecologists’ (RANZCOG) annual scientific meeting (ASM) in Melbourne recently, she explored how and why ‘mesh’ had become a “four-letter word”.

“What follows is really a tale of travesty,” said Thakar of the series of regulatory and professional failings that allowed mesh products to gain traction and flood the market before they had a robust evidence base.

Ease of use, quicker recovery and a perception among gynaecologists that they were better for patients were some of the reasons Thakar gave for the popularity of the mesh products.

But she also offered a damning assessment of the role of industry partners, researchers, academics and physicians, calling for a “paradigm re-shift” to put undue influences at arm’s length from clinical practice.

“Otherwise this specialty will be dead,” she said.

Thakar pointed to fragmentation and the regulation of these devices being on a voluntary rather than mandatory basis worldwide, the uneasy financial relationship between industry and research, and the training and throughput of surgeons.

She noted that most mesh procedures had been found to have been done by non-board certified personnel (or registrars).

She also reminded colleagues that clinicians had driven the uptake of mesh products, pushing for alternatives to the products and procedures then on offer.

Thakar urged those who considered themselves innovators to “curb your enthusiasm” and restrict the use of new technologies to research settings, with adequate training (including simulation) essential once new devices and techniques had enough evidence to enter clinical practice. 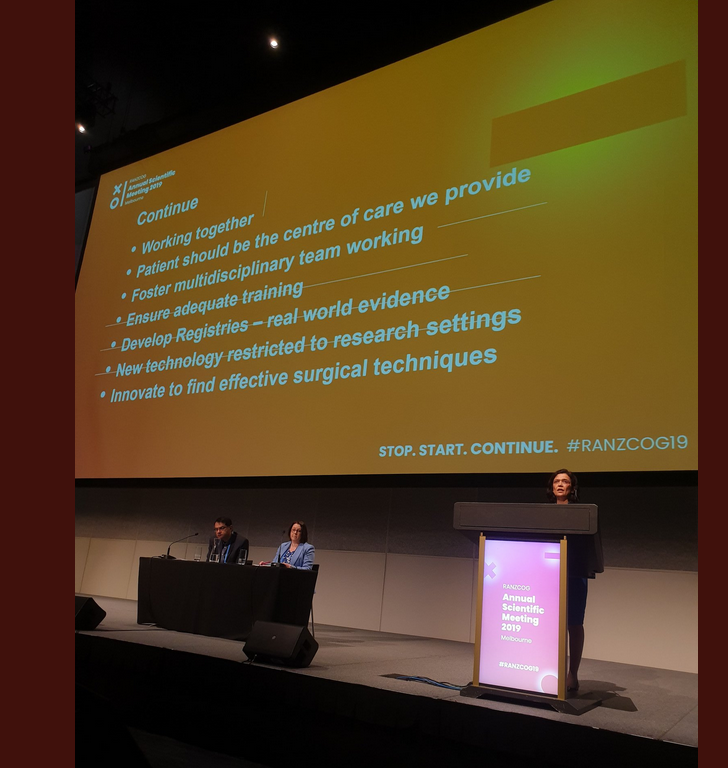 The issue of training, simulation and surgical volumes was also explored by Sydney surgeon Professor Jason Abbott, who urged colleagues to “stop thinking we can be good at everything”.

(Read more about simulation in this Twitter thread by Dr Rebecca Szabo, summarising her presentation to the ASM) 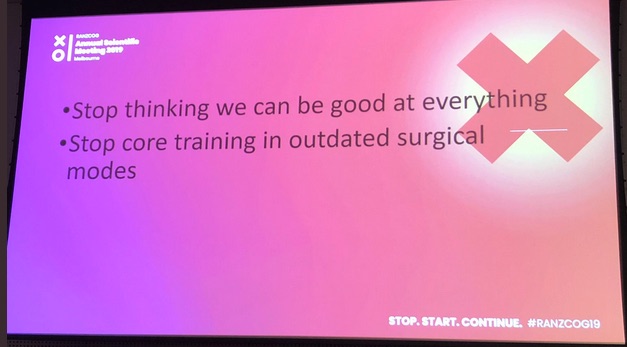 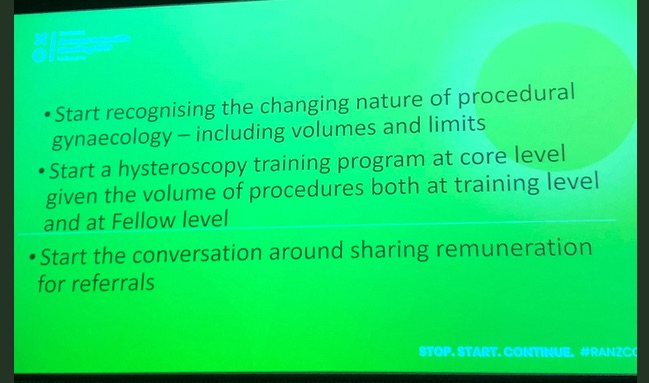 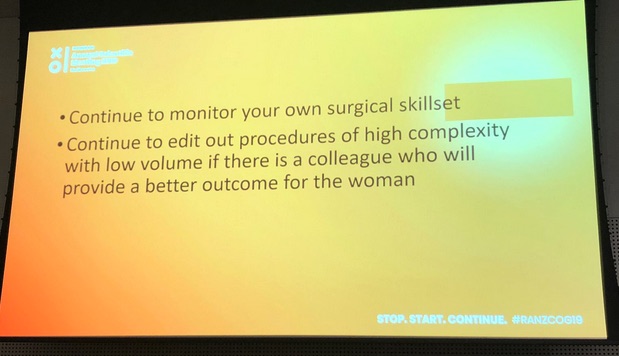 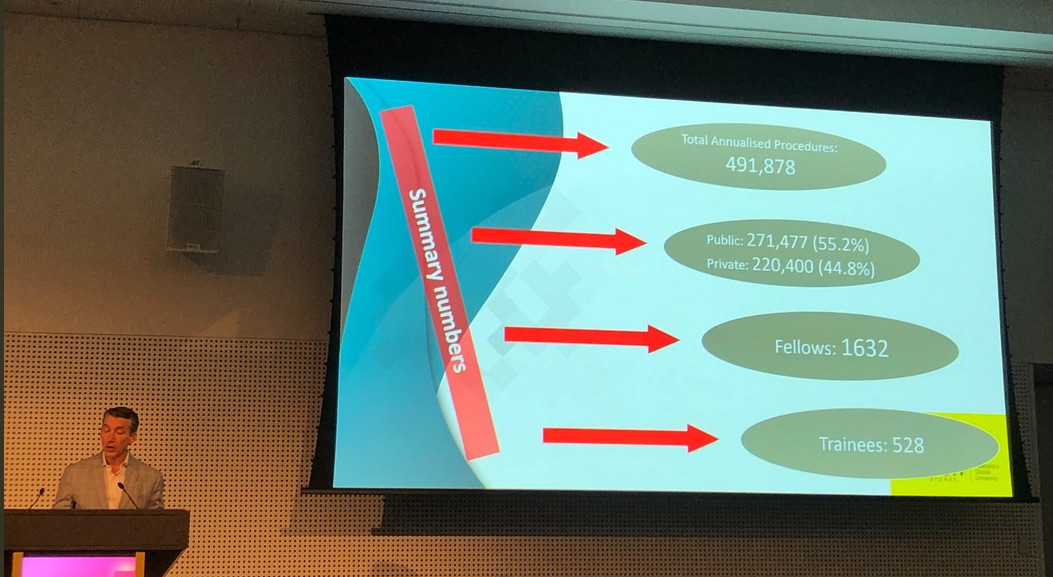 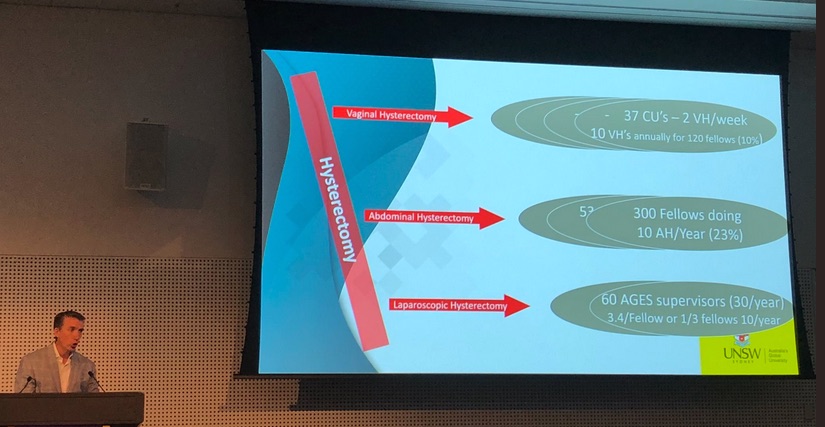 Thakar also stressed the importance of patient involvement in medical innovation, not just at the point of trial and rollout but from the earliest stages of conception.

She called for consumer representation at every level of medical governance, whether committee, council or board.

Our profession has had to navigate the failure of systems, and ourselves, with the improper use of vaginal mesh that has had significant consequences for many women.

While much of the blame lies with medical device companies and poor regulation, the College recognises that we too hold responsibility.

We are actively supportive of better training and regulation.

We acknowledge that, when surgical complications occur, it is the patient who suffers.”

In an interview with Croakey at the conclusion of the conference, Roach said Thakar’s presentation had been one of the highlights of the meeting, and wholeheartedly endorsed her call for the profession to heed the lessons of the mesh controversy.

“We absolutely do acknowledge the role of the medical profession in that failure,” said Roach. “I don’t think it’s good enough to simply point to the government or to the regulatory bodies or the device manufacturers and say that it was all their fault”:

“We failed to investigate the potential complications of mesh adequately; even more importantly we failed to listen when women started to report the negative consequences of mesh. We failed to validate their pain, we failed to recognise that they were experiencing complications, and we didn’t do something about it when we should have.

“There were many opportunities for us to stop using mesh at an earlier stage and I think that it’s better for the medical profession, it’s more honest, for us to acknowledge our role in that and to address that.”

In a panel discussion following Thakar’s talk, Roach had questioned the significance of self-interest, and not just for industry, which he described as the “low-hanging fruit” for criticism, but within their own specialty.

Professor Ben Mol, who head up Monash University’s evidence-based women’s health care research group and was also on the panel, said the world was driven by profit, and anything that offered a financial return took on a life of its own.

“That, I am afraid, is also true in medicine,” he said.

Mol said the only way to truly address this issue was reform of financial incentive systems, giving the example of IVF where he proposed remunerating specialists per successful pregnancy rather than per cycle performed.

In an earlier keynote, Mol advocated for what has been dubbed the third, or moral era in medicine, the central tenets of which included a rejection of protectionism, greed and complex individual incentives, and a shift of emphasis from revenue to quality, transparency, civility and to “hear[ing] the voices of the people served”.

Mol noted that some half of all commonly-used treatments in the UK were of unknown effectiveness, and research had shown a similar proportion within obstetrics and gynaecology in the Netherlands, describing this as the “elephant in the room” for O&G as a specialty.

He examined a number of common interventions including use of assisted reproductive technologies, induction of labour, caesarean section and hysterectomy, showing that, for each, there were considerable practice variations, including equity of access.

All were increasing in Australia, and Mol questioned whether clinicians properly considered the consequences of these procedures or adequately counselled patients about them.

Echoing Thakar, Mol said it was about striking the right balance between innovation and re-evaluating what was already being done.

In presenting the media award, as per the tweet below, Roach said the piece had been chosen, in part, because it had given a voice to victims. 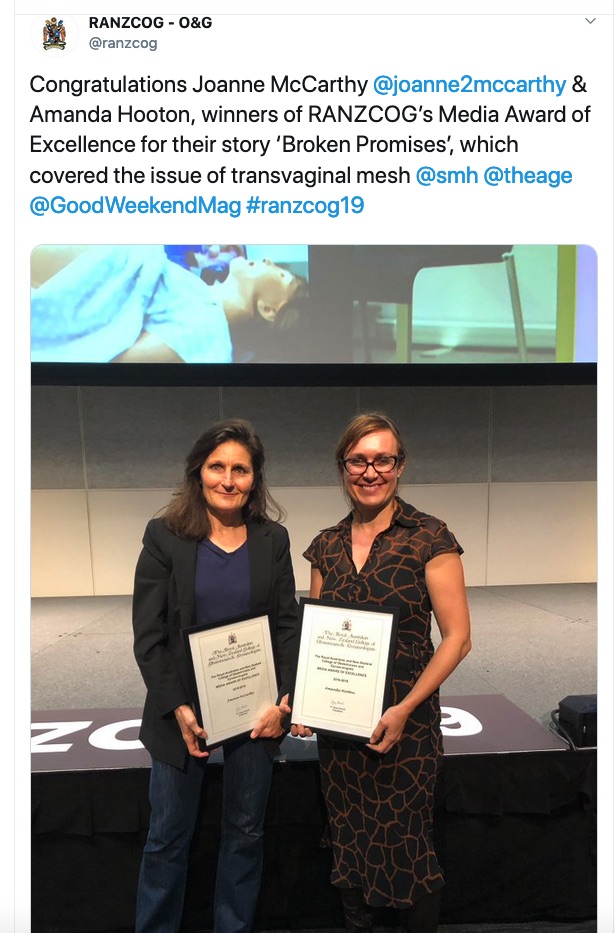