Home Global health and climate change climate change Historic, inadequate, important, a miracle and a disaster – after COP21, it’s time to grow up and get moving 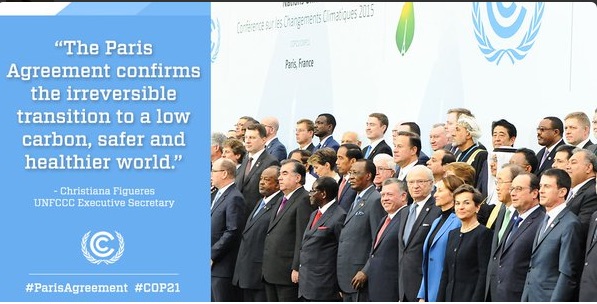 Historic, inadequate, important, a miracle and a disaster – after COP21, it’s time to grow up and get moving

The Paris agreement on climate action, which calls for a target to keep average global warming to “well below” 2°C, and includes an aspirational target of 1.5°C, can be read in full here.

It has been described as “a watershed climate pact”, a signal of “the beginning of the end of the fossil era”, and as historic, important – and inadequate (in The Conversation). According to George Monbiot in The Guardian, it is both a miracle and a disaster.

Climate campaigner Bill McKibben says there is no time for optimism or complacency, and argues that the critical issue now facing the world is: how fast can we move on ending fracking and subsidies to fossil fuels, while scaling up renewables.

Meanwhile, Dr Sinead Boylan, a public health nutritionist from the Sydney School of Public Health at the University of Sydney, calls for alignment between policies on climate action and control of non-communicable diseases. She writes below that:

“It is now unquestionably time for all of humanity to wake up. We all live on the one planet and our over-consumption of energy is destroying planetary and population health at an unprecedented rate.”

As an estimated 25,000 delegates and 147 leaders leave the Conference of Parties (COP 21) in Paris to go back to their day jobs, we have time to reflect on how it went. The major aim was to adopt a treaty and commit to keeping global warming below 2°C.

The focus was on big asks – mitigation, adaption, climate finance and technology. Why the big asks? Climate change is an imminent threat, a global threat.

Climate change not only impacts planetary health. The impacts on population health are widespread, with some effects being more obvious than others.

However, many of the ways in which we live today (e.g. car travel, poor urban design, mass food production) contribute to what have been labelled the two of the biggest public health threats of the 21st century. 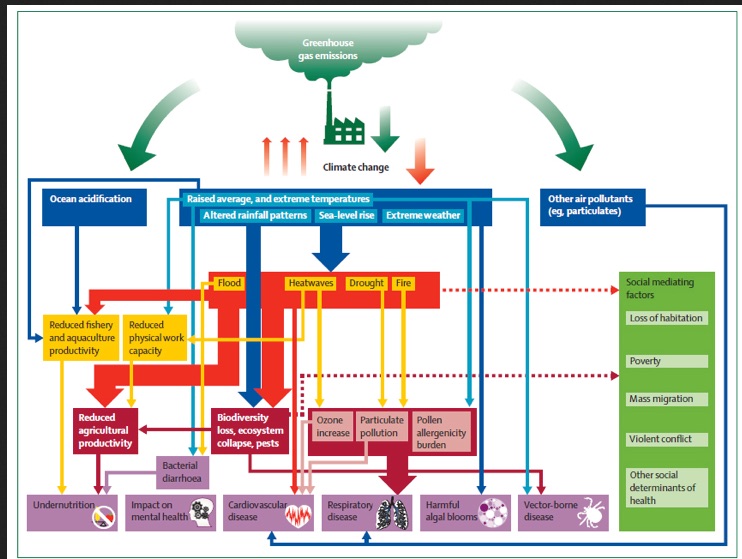 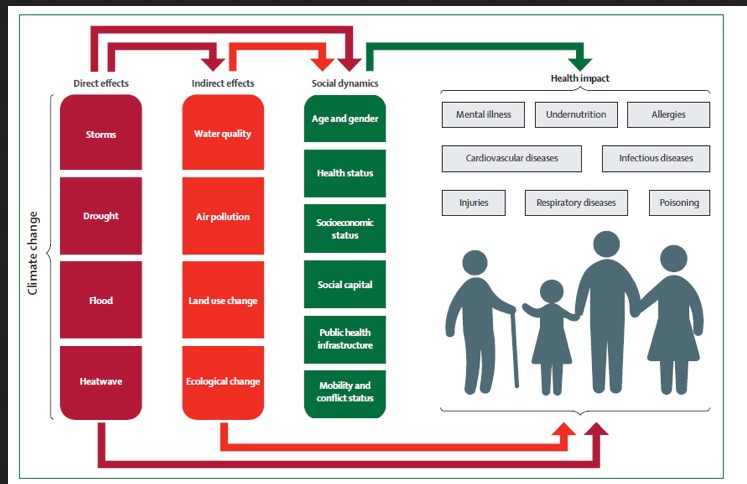 If in the immediate future, humanity does not find big answers, we risk falling out of what the late Anthony McMichael referred to as the ‘Goldilocks zone’ – a comfort zone where the global temperature is ‘not too hot, not too cold, but just right’.

As you can imagine, developing nations, being the most vulnerable to the effects of climate change, experiencing the double-burden of disease and little capacity to deal with such threats, are most likely to fall out of the Goldilocks zone.

However, no one is safe – the political will, economic and intellectual capacities of developed nations cannot be deployed quickly enough.

Emerging research evidence links the causes of climate change and NCDs and it has been argued that the ‘two great and urgent contemporary human challenges’ – to improve global health, especially the control of NCDs, and reduce the health impacts of climate change – would benefit from aligning their policy agendas, and simultaneously improving population and planetary health.

In 2009, The Lancet published a Series of ground-breaking papers presenting evidence for certain actions to tackle climate change that might improve health. These health co-benefits—which are additional to the global-health benefits that come from mitigation—could partly offset the costs of tackling climate change. For example, a combination of agricultural technological improvements and a 30% reduction in livestock production could significantly reduce greenhouse gas emissions and reduce burden of ischaemic heart disease due to decreased consumption of saturated fat.

More recently, The Lancet Commission on Health and Climate Change mapped out the necessary policy responses to protect population health. 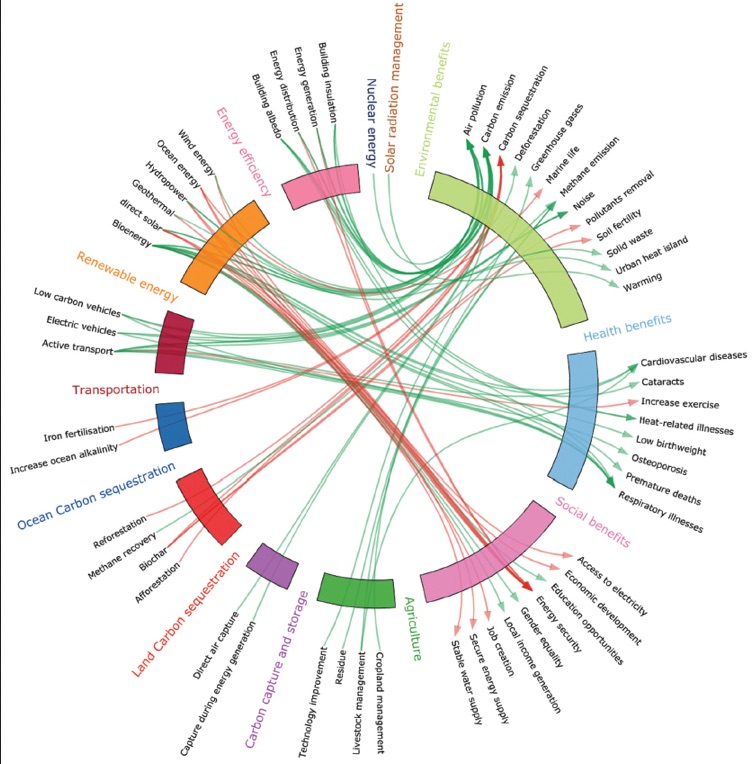 In addition, The World Health Organisation Climate and Health Declaration calls for a climate change agreement that promotes “strong and effective action to limit climate change, and avoid unacceptable risks to global health”. As Dr Maria Neira, WHO Director, Department of Public Health, Environmental and Social Determinants of Health, states:

“As health professionals, we have a duty to stop the impacts of climate change. While it may seem outside our scope of work, we are at the front line in caring for the health of current and future generations.”

So while there is some evidence of a willingness to move in right direction, an increasingly clear link between climate change and NCDs, and the existence of several key governance mechanisms for tackling these issues, the confluence between NCDs and climate change remains under-applied by policy makers.

COP21 is ironic timing. Twenty-one – a milestone year which signifies the coming of age and a transition which infers significant benefits but also unlocks full rights and responsibilities.

NCDs and climate change are humanities biggest social, economic and environment responsibilities. So where have NCDs sat on the COP21 agenda? They haven’t really.

In fact, out of the 50-odd COP21 side-meetings, less than a handful explicitly mentions health. Like my household chores as a teenager, NCDs don’t get a look in.

Ironically, it was my 21st birthday when my mother had a heart attack after suffering from cardiovascular disease most of her life. That was when I woke up and faced my responsibilities.

It is now unquestionably time for all of humanity to wake up. We all live on the one planet and our over-consumption of energy is destroying planetary and population health at an unprecedented rate.

We need to tackle both issues at a similar rate. Identifying solutions which have co-benefits for both these imminent threats is one emerging strategy which offers some hope. Whether tried and tested, or in their infancy, these co-benefits need to be more prominent in both international negotiations and domestic policy making.

• This article is a slightly edited version of one first published by the Sydney Environment Institute at the University of Sydney.

• Dr Sinead Boylan is a public health nutritionist who works closely with the Ministry of Health in her role as Research Fellow at the Prevention Research Collaboration, School of Public Health at the University of Sydney and is also affiliated with the Charles Perkins Centre. Sinead is passionate about identifying solutions which have co-benefits for population and planetary health. Her interest was sparked by helping co-ordinate The University of Sydney Masters in Sustainability Population and Health Unit for the last 6 years. While travelling overland across various continents, Sinead has seen firsthand how the way that we all live is impacting ourselves and the planet. She is keen to help identify equitable solutions to protect both.