Home The Croakey Archives CroakeyGO archive 2017 – 2018 CroakeyGo 2018 #CroakeyGO #VicVotes 2018 Honouring the legacy of William Cooper: an invitation to walk together 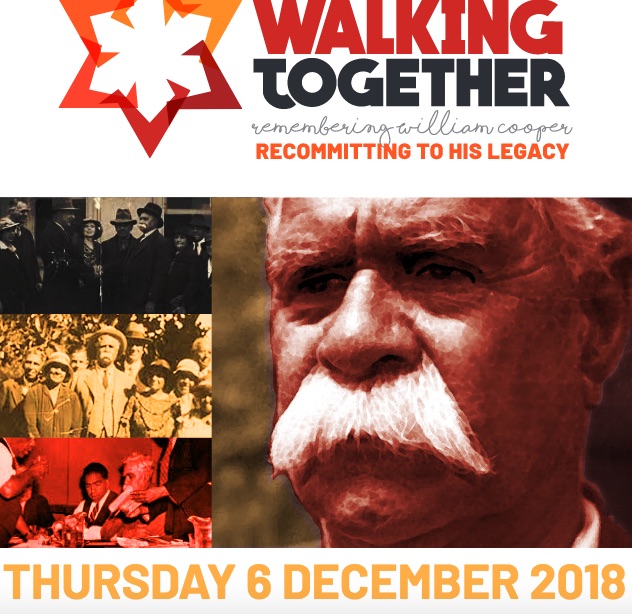 Honouring the legacy of William Cooper: an invitation to walk together

In Melbourne on Thursday 6 December, walkers will pay tribute to legendary Aboriginal Elder and activist William Cooper to mark the 80th anniversary of his historic stand to condemn the persecution of Jewish people under the Nazi regime.

The Walking Together march is organised by the William Cooper Legacy Project, together with the Jewish Community Council of Victoria, which says in its invitation:

While world leadership watched in silent disbelief to the events of Kristallnacht, Uncle William Cooper, the Secretary of the Australian Aborigines’ League and an elder of the Yorta Yorta, led the only known private protest against the Nazi regime.

At a time when Aboriginal and Torres Strait Islanders people were themselves denied citizenship and other basic human rights, and where they were frequently subjected to appalling physical, social and economic hardships, he chose to stand for our people and our future.”

William Cooper’s grandson, Alfred (Uncle Boydie) Turner is patron for the walk. Now 90 years old, he has travelled across Australia and the globe to honour his grandfather’s vision and commitment.

The Croakey team learnt of the Walking Together march at a chance meeting with Turner and his friend and colleague Abe Schwartz during the recent #VicVotes #CroakeyGO in Melbourne.

When he was just a very small boy, Alf Turner, or Uncle Boydie as he’s known, used to walk alongside his grandfather, the legendary Aboriginal activist William Cooper, from their home in the Melbourne suburb of Footscray into the CBD, helping him to carry his books and papers on many outings to pursue Aboriginal rights.

“He’d stand up on a box on the banks of the Yarra to tell people how the Aboriginal people were treated,” Turner told Croakey of those many trips in the 1930s as Cooper stepped up his calls for Indigenous representation and rights.

“Those days were not too good for Aboriginal people,” Turner said.

But since those early walks, Turner’s journey in support of his beloved grandfather has taken him much further.

He has travelled the globe to have William Cooper’s demands delivered to those for whom they were intended, but so often blocked.

Turner did not quite win an invite to Buckingham Palace to deliver Cooper’s petition to the Royal Family demanding Indigenous representation in the Australian Parliament, which then Prime Minister Joseph Lyons failed to deliver to King George V.

But in 2014 he did hand it over to Governor General Peter Cosgrove to deliver on his behalf.

Last year he travelled to Berlin where he was granted the permission his grandfather was denied, 80 years ago by the German consulate in Melbourne.

There he handed over a copy of the protest letter condemning the persecution of European Jews in the wake of Kristallnacht in 1938, when hundreds of synagogues and Jewish businesses were burned to the ground while Jews were beaten, imprisoned and killed.

On behalf of the Aboriginal inhabitants of Australia, we wish to have it registered and on record that we protest wholeheartedly at the cruel persecution of the Jewish people by the Nazi government in Germany.

We plead that you would make it known to your government and its military leaders that this cruel persecution of their fellow citizens must be brought to an end.”

Cooper’s attempt to send that message is believed to have been the only private protest of its kind in Australia against Kristallnacht.

Turner was also last year invited by the Australian Government to lay a wreath at the centenary of the Light Horse charge at Beersheba on October 31, to honour the role of Yorta Yorta soldiers in World War I, and Aboriginal soldiers in all ANZAC conflicts, including Private Daniel Cooper, William Cooper’s son, who was killed in World War One.

Had Daniel Cooper survived, he would have returned from fighting for a country that didn’t recognise him to be treated like a second-class citizen, as so many Aboriginal military veterans were.

Turner and Schwartz have written about William Cooper’s role as a “mobilising force” in the early fight in Australia for Indigenous rights, after spending most of his life living near the junction of the Murray and Goulburn rivers, in the Yorta Yorta nation of his mother.

Cooper began to balance farm work with politics, spurred on by the poverty and inequality that surrounded him. He joined the Australian Workers’ Union and represented Aboriginal workers in western New South Wales and central Victoria. He championed remote communities that were denied aid during drought and the Depression.

When he moved to 1933 at the age of 70, he stepped up his political work, and was instrumental in the establishment of the Australian Aborigines’ League – the first advocacy organisation with an entirely Aboriginal membership and the predecessor to the Victorian Aborigines Advancement League which played a prominent role in the Indigenous struggle for land and human rights.

He was one of the organisers of the Day of Mourning, held by Aboriginal and Torres Strait Islander people on the 150th anniversary of colonisation on Australia Day 1938.”

In a 2014 article, The Age quoted Turner as saying the symbolism of the handover of his grandfather’s petition for Indigenous representation in the national Parliament was enough, even if the Queen did not respond.

“This is something I know my grandfather wanted to finish, but couldn’t. I am very pleased we could do that,” he told Fairfax Media.

“I remember him [William Cooper] sitting up in bed – even when he was sick – writing letters to different people by candlelight … prime ministers, politicians and the like, trying to get something done about how our people were treated.

“He was a very gentle man, one of those grandfathers that every child should have.”

The petition to the King states that Aboriginal lands have been “expropriated” and Aboriginal people’s legal status “denied to us” by His Majesty’s Governments, and urges the King to “grant us the power to propose a member of parliament, of our own blood or a white man known to have studied our needs and to be in sympathy with our race, to represent us in the Federal Parliament”.

With the backing of more than 1800 signatures, it warned of “the extinction of the Aboriginal race” if the injustice was not addressed.

The interview with Uncle Boydie and Abe Schwartz was filmed at the Stolen Generations memorial in Fitzroy, Melbourne.