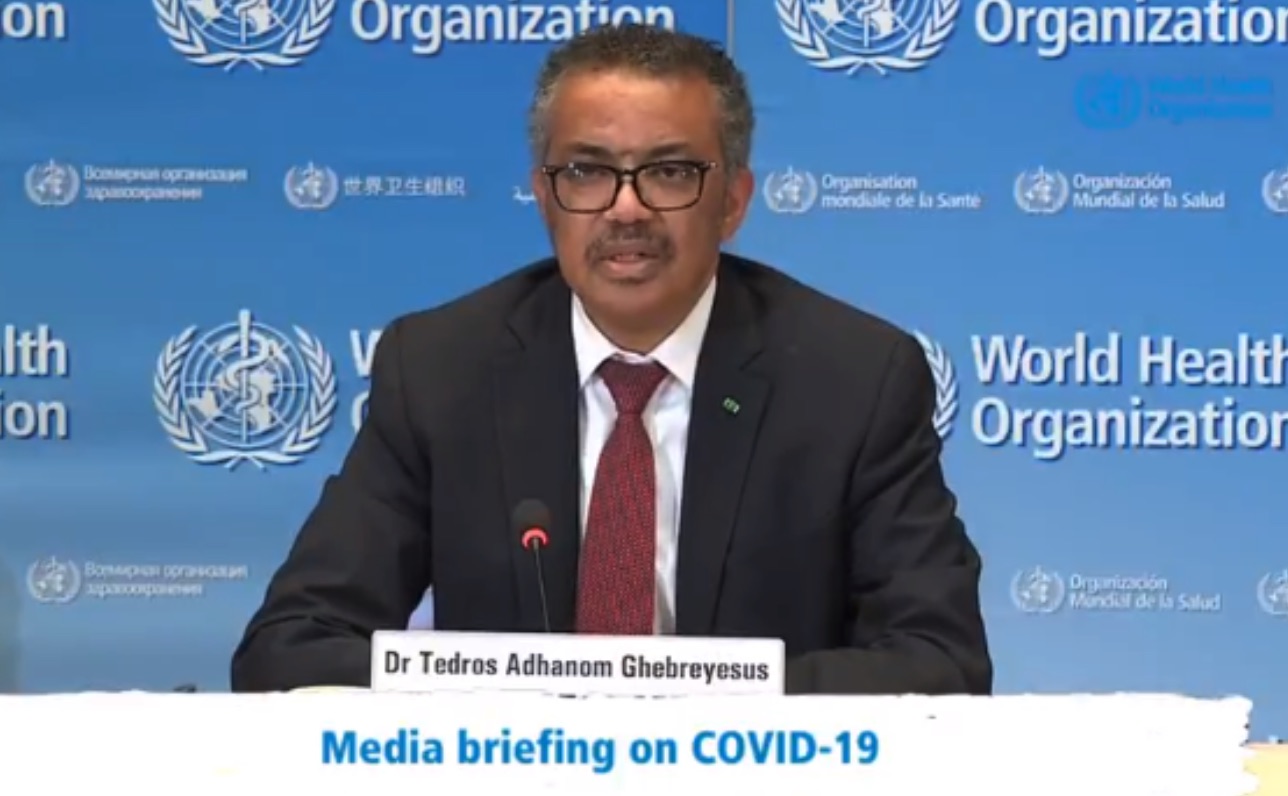 WHO's Director-General responds to the United States announcement

Introduction by Croakey: More than 117 million children in 37 countries may miss out on life-saving measles vaccines as a result of the COVID-19 pandemic, according to a statement issued this week by the Measles & Rubella Initiative (M&RI), a global partnership whose founding members include the World Health Organization (WHO).

A surge in measles cases in recent years claimed more than 140,000 lives in 2018, mostly of children and babies. As the statement notes, this is a “dangerous backdrop” when preventive and responsive measles vaccination campaigns have now been paused or postponed in many countries to help avert further spread of COVID-19.

The statement is a reminder that President Donald Trump’s attack on the WHO is not only jeopardising global efforts to combat the COVID-19 pandemic, which has now claimed more than 137,000 lives (as of 16 April at 5.20pm AEST), but also that there are many wider consequences to undermining the organisation’s work.

In seeking to distract attention from his own political problems, Trump has generated a chorus of global support for the WHO, although that was surely not his intention.

Below, researchers from the University of Sydney and the George Institute for Global Health describe the President’s attack on the WHO as “unconscionable”.

For an overview of wider reaction, see the tweets and links beneath their article, including a comment by Dr Richard Horton, Editor-in-Chief of The Lancet, describing Trump’s action as “a crime against humanity”.

On April 15, President Donald Trump announced that the United States will abruptly stop funding the World Health Organization (WHO) for at least the next three months. This decision was made amid claims that the WHO has grossly mishandled the COVID-19 pandemic and covered up the spread of the coronavirus.

This was clearly just an attempt to deflect attention from the mishandling of the situation in the US.

The WHO is only as strong as the leadership and commitment of its member states, which includes the US. Abandoning the leading global public health body during a worldwide crisis is unconscionable.

The majority of these efforts are deployed in low and middle income countries. WHO also plays a lead role in responding to acute infectious disease outbreaks, like SARS, Ebola, and now COVID-19.

While trying to meet the complex demands of its 194 member states is challenging, the WHO is the best model we currently have for addressing global public health issues.

Transparency and accountability are crucial to ensuring trust in WHO, but threatening, or actually de-funding an organisation in mid-crisis will not magically improve its operations.

Member states do have a history of decreasing, or increasing, their WHO funding commitments. However, a “policy-normal” approach is to do so over a period of years, not as a form of political theatre to deflect attention from domestic COVID-19 control policy.

The policy response is occurring on the fly, the virus has spread in six weeks to almost every country, and it can rapidly overwhelm any health care system if its spread is not controlled.

In countries that clamped down early to reduce spread of the virus, case numbers are starting to decline. In other countries, the epidemic remains rampant, or in many low-resource countries, the worst is still ahead of them.

WHO has a key role in the dissemination of population and clinical guidelines for epidemic control in this varied and changing context.

Communicating clearly and effectively during a fast-moving infectious disease is essential, but incredibly challenging when there is so little time to plan and reflect.

The initial focus on simple key messages around frequent hand washing and not touching your face, maintaining physical distances and reducing crowds has rapidly evolved to complex debates around school closures and whether everyone should wear masks.

The US has been a long-time financial supporter of WHO, much more so than other high-income countries. This sudden change in commitment destabilises WHO programs across the board, as well as suddenly limiting the immediate response to COVID-19.

Low income countries will become desperate and thousands could needlessly die, not only from COVID-19, but also from resurgent malaria, TB and other entirely preventable childhood illnesses, if WHO programs are suddenly without resources.

The relatively small investment in the WHO is the very least high-income UN member states can do to help improve global heath and contain the spread of COVID-19. The $400 million annual US contribution to the WHO is a low-cost, high-return investment.

Strengthening global collaboration will see an end to the coronavirus outbreak far sooner than any one nation going it alone.

We need sharing of country-level experiences and expertise and committed resourcing – not defunding or delayed resourcing of WHO during a global pandemic.

Enhancing our ability to suppress and contain COVID-19 in a globalized world requires a global response.

Anything less will only prolong the outbreak, increase deaths, and worsen the economic fallout.

Professor Jacqui Webster @JacquiWebster3 is Head of Advocacy and Policy Impact at the George Institute for Global Health.

At The Conversation, in What Donald Trump’s Funding cuts to WHO mean for the World, Adam Kamradt-Scott, an Associate Professor at the Centre for International Security Studies, University of Sydney, writes:

If enacted, these funding cuts may cause the WHO to go bankrupt in the middle of a pandemic. That might mean the WHO has to fire staff, even as they are trying to help low- and middle-income countries save lives.

It will also mean the WHO is less able to coordinate international efforts around issues like vaccine research, procurement of personal protective equipment for health workers and providing technical assistance and experts to help countries fight the pandemic.

More broadly, if the US extends these cuts for other global health initiatives coordinated by the WHO, it will likely cause people in low income countries to lose access to vital medicines and health services. Lives will be lost.”

At the Economist, Kevin Rudd writes that the WHO “has been underfunded for decades as America and others put their resources elsewhere and ignored repeated warnings to strengthen its powers. Now, under Donald Trump, America has turned the WHO into a convenient scapegoat for its own domestic failings.”

The United Nations Secretary General has issued a statement, saying that the WHO must be supported, as it is absolutely critical to the world’s efforts to win the war against COVID-19, and:

This virus is unprecedented in our lifetime and requires an unprecedented response. Obviously, in such conditions, it is possible that the same facts have had different readings by different entities.

Once we have finally turned the page on this epidemic, there must be a time to look back fully to understand how such a disease emerged and spread its devastation so quickly across the globe, and how all those involved reacted to the crisis.

The lessons learned will be essential to effectively address similar challenges, as they may arise in the future.

But now is not that time.

As it is not that time, it is also not the time to reduce the resources for the operations of the World Health Organization or any other humanitarian organization in the fight against the virus.

As I have said before, now is the time for unity and for the international community to work together in solidarity to stop this virus and its shattering consequences.

Politico: The virus-fighting agency Trump gutted (it’s not the WHO) reports that “diplomats and public health experts at the WHO and elsewhere say the US president has already gutted the agency that has traditionally taken the lead in battling global pandemics: the US Centers for Disease Control and Prevention”.

Halting funding to the WHO is a dangerous, shortsighted, and politically motivated decision, with potential public health consequences for all countries in the world, whether they are rich or poor . . .

This pandemic is not over anywhere until it is over everywhere. Strong support from the United States has always been key for WHO’s effectiveness and must continue.”

The BMJ also quotes Robert Dingwall, professor of sociology at Nottingham Trent University, who called the funding freeze “a typically petulant act against an international organisation that has sought to maintain its integrity and impartiality rather than to bow to President Trump’s transient and volatile prejudices.”

He added that, while there were “fair grounds for debating WHO’s positions and performance, its contribution to maintaining international solidarity and coordination, within the limits of the powers granted by its members, cannot be denied.”

This Twitter thread by Laurie Garrett concludes that, overall, there’s been a steady 30-year trend of stagnating assessed funding for WHO, at the same time as the organisation’s mission has widened. This has spawned greater reliance on voluntary support, chiefly from US Government and the Gates Foundation. With that dependency has come vulnerability – to White House whims.

WHO Director-General Dr Tedros Adhanom Ghebreyesus responded to the US move on 15 April, stating that WHO is not only fighting COVID-19 but is also working to address polio, measles, malaria, Ebola, HIV, tuberculosis, malnutrition, cancer, diabetes, mental health and many other diseases and conditions. The WHO also works with countries to strengthen health systems and improve access to life-saving health services.

He said the WHO was reviewing the impact on its work of any withdrawal of US funding and will work with partners to fill any financial gaps and to ensure its work continues uninterrupted.

We will continue to work with every country and every partner, to serve the people of the world, with a relentless commitment to science, solutions and solidarity.

Since the beginning, WHO has been fighting the pandemic with every ounce of our soul and spirit. We will continue to do that until the end. That’s our commitment to the whole world.” 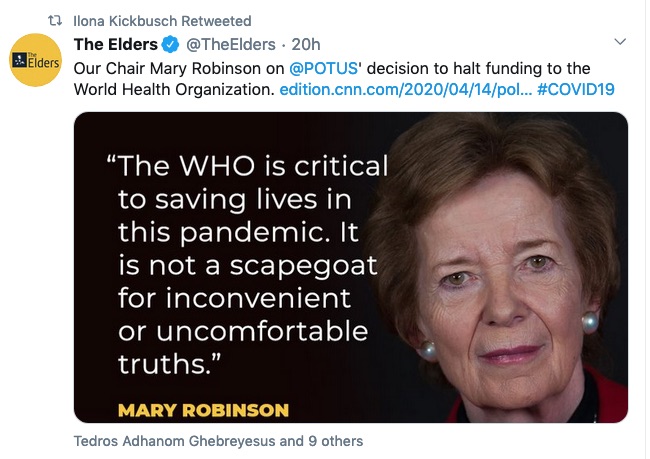 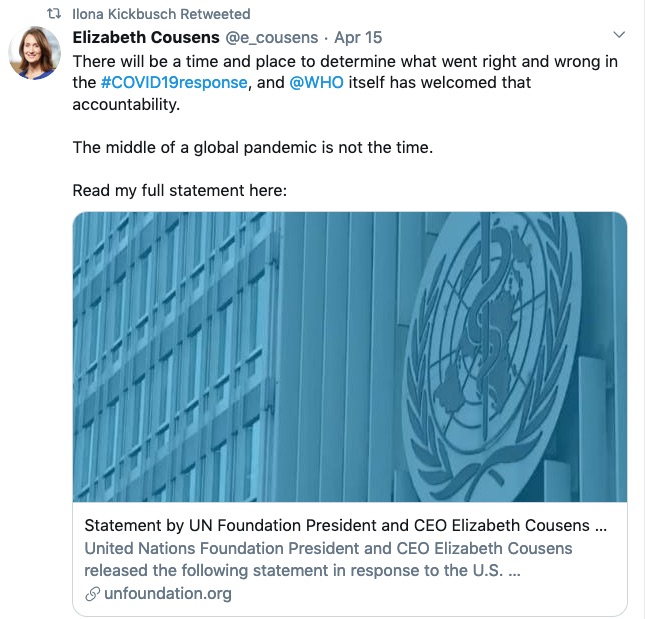 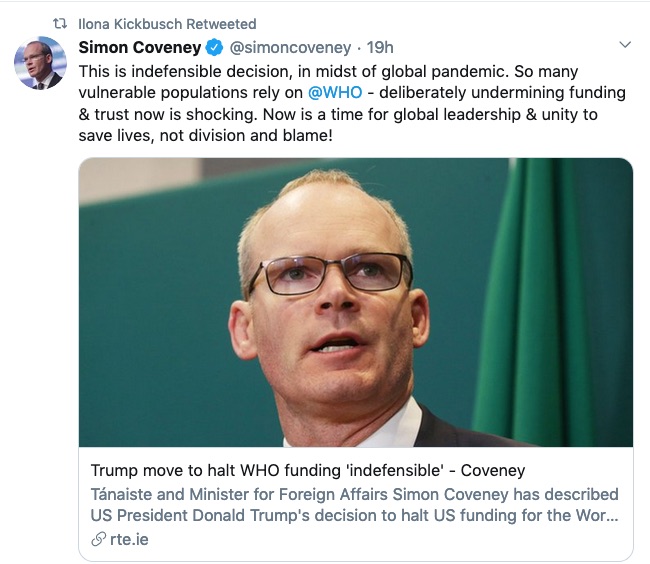 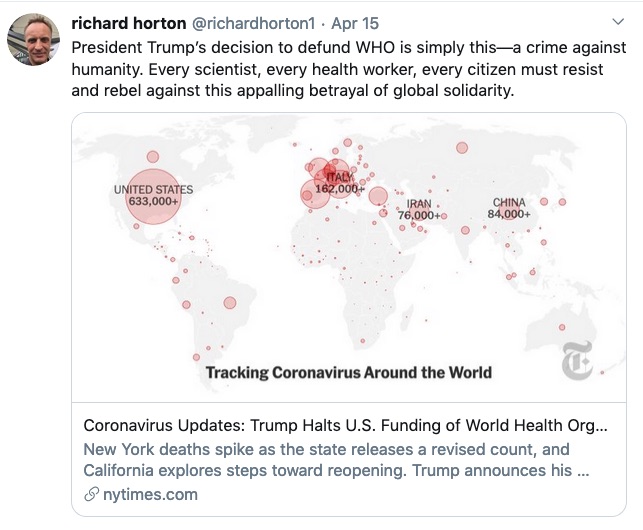 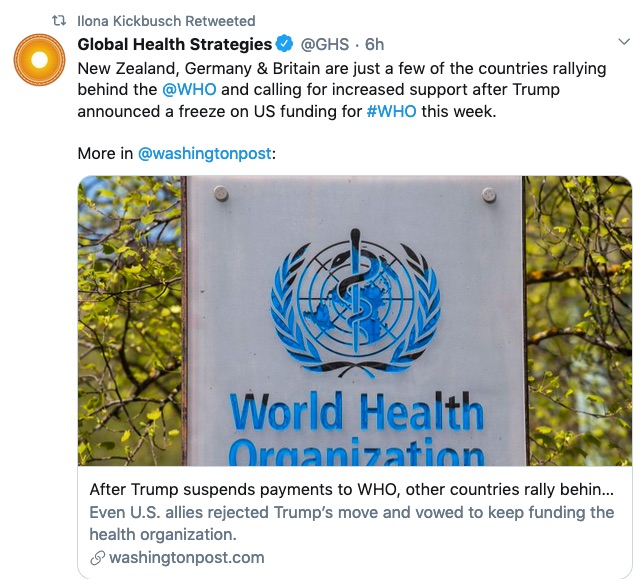 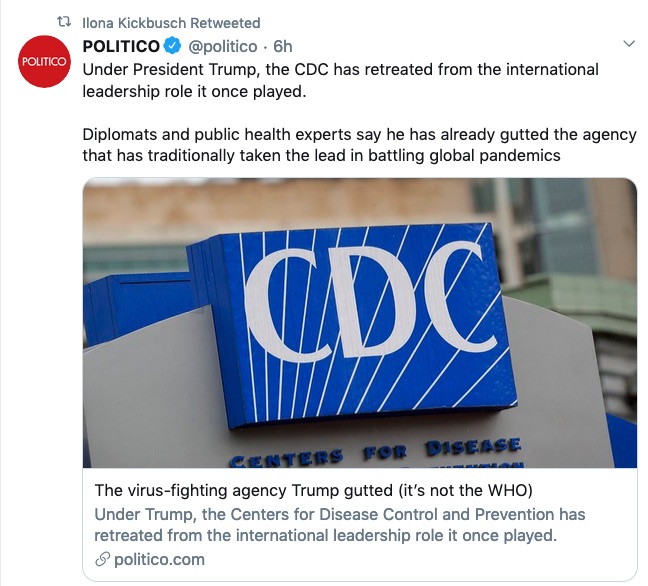 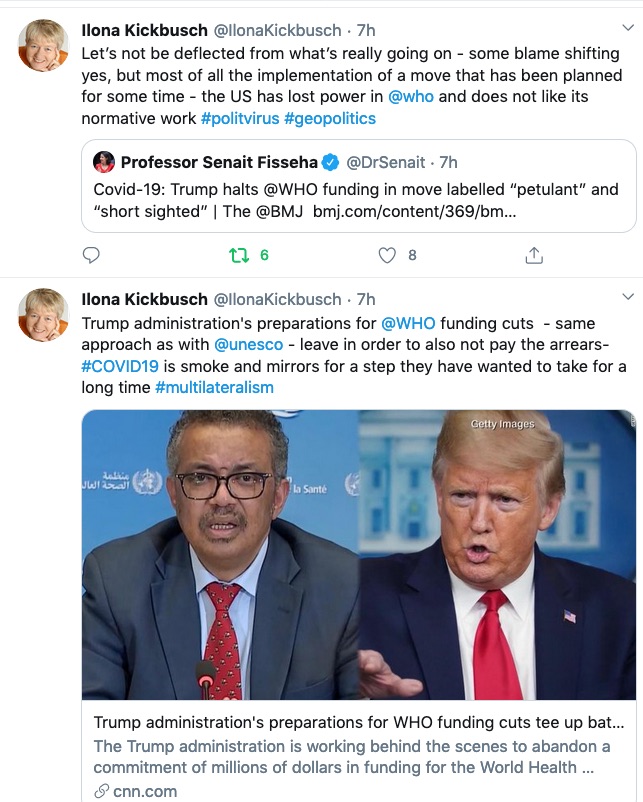 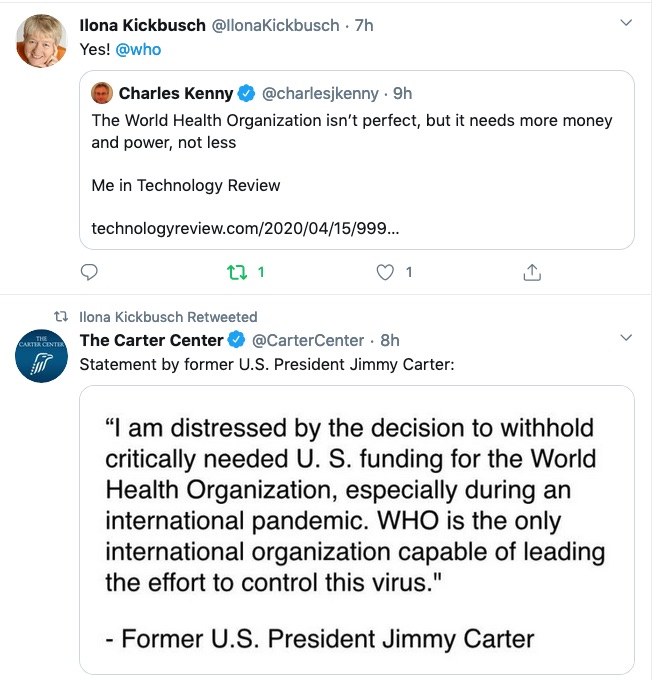 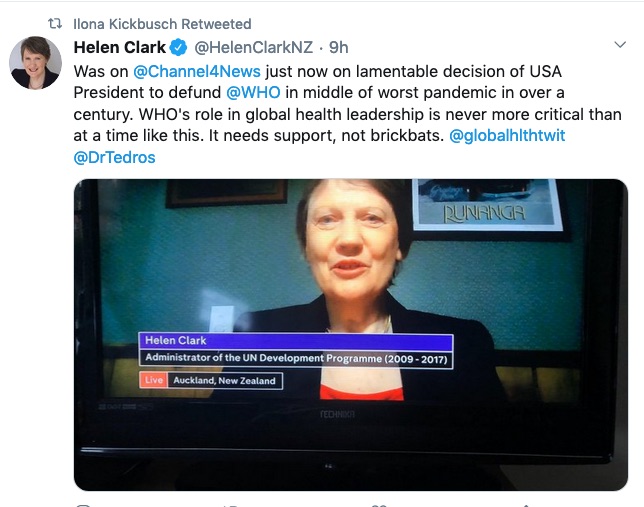 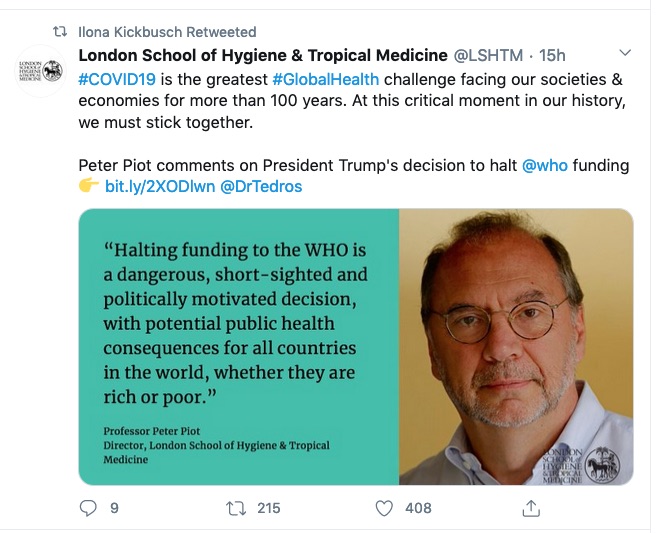 Graphic from the WHO 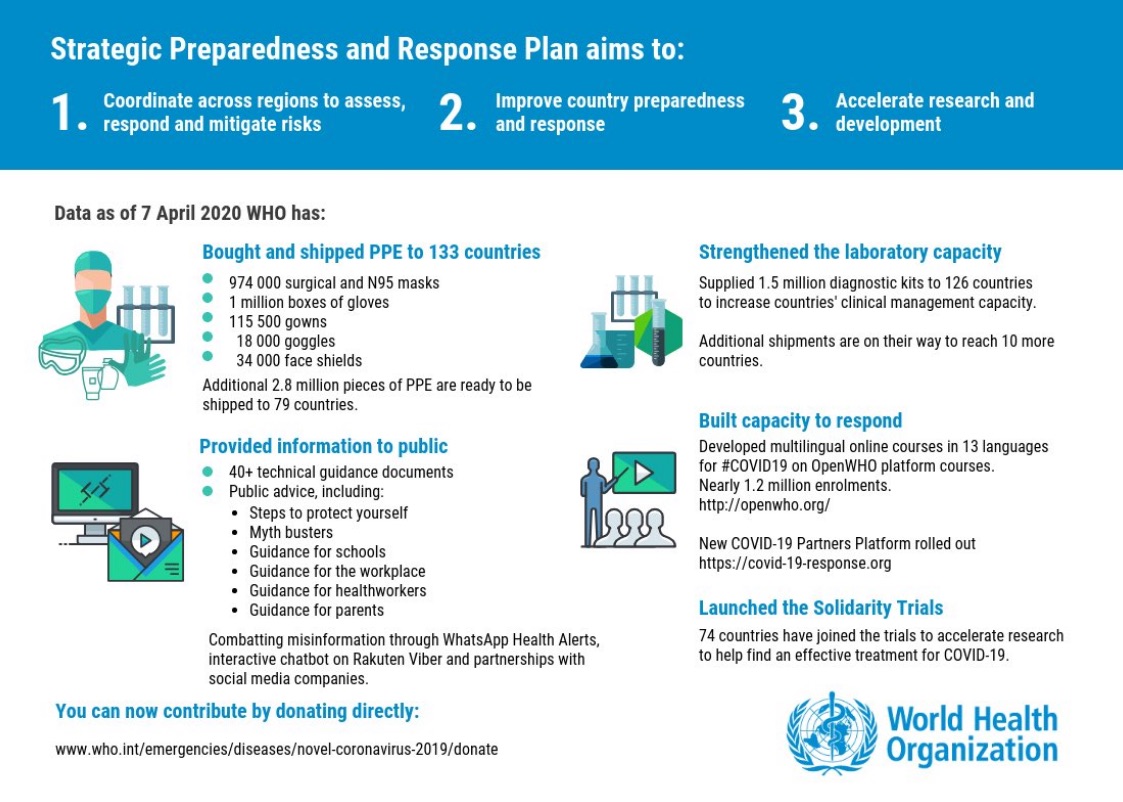